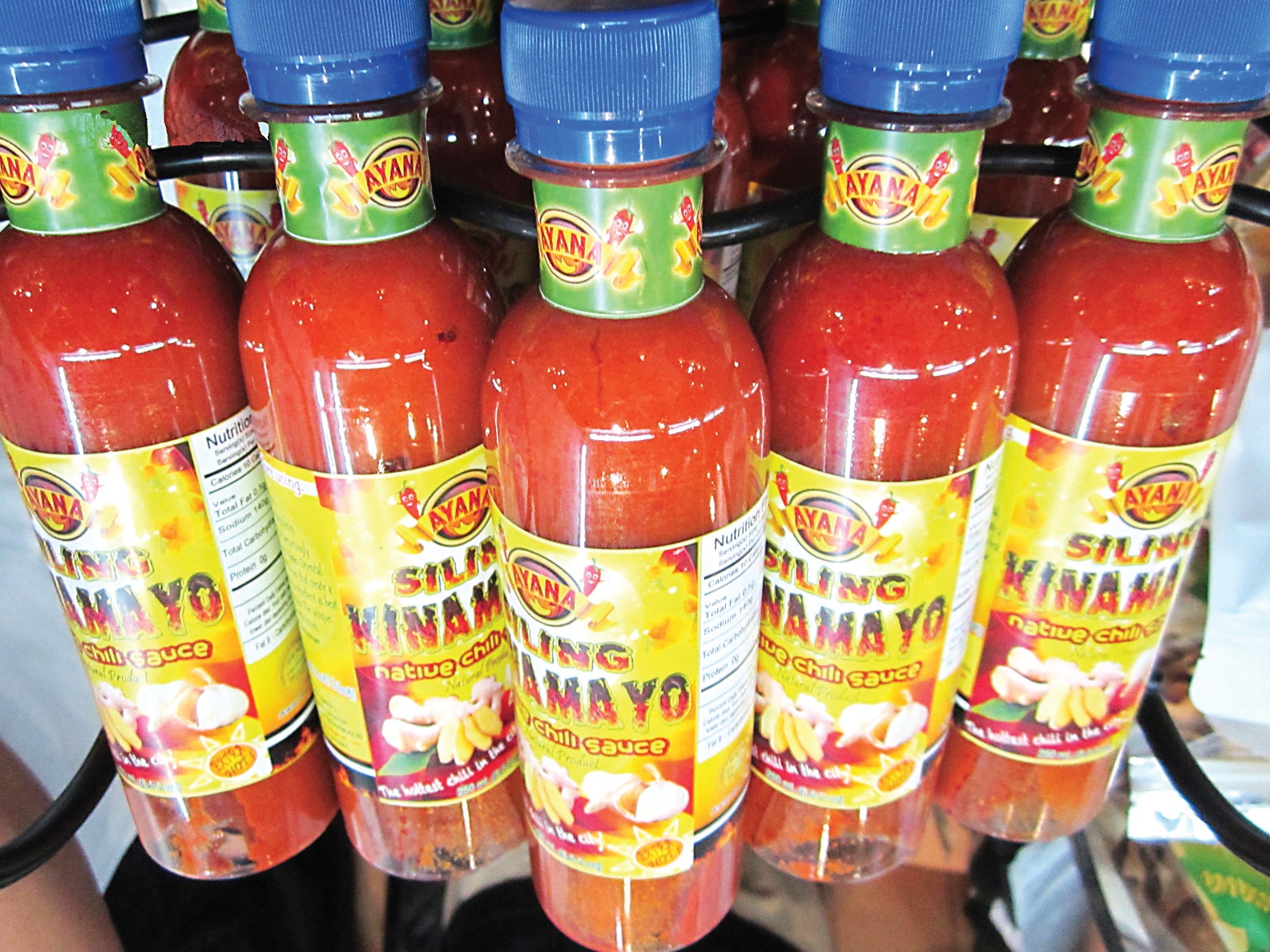 The ability of the Filipinos to rise up after every adversity has been proven time and again. That despite major calamities, almost everyone could still manage to offer a warm smile and see the goodness in everything. And the couple behind Ayana’s Siling Kinamayo, together with the hundreds of families in the Mindanao region, particularly in Davao Oriental, could very well epitomize this trait.

Ayana’s Siling Kinamayo (Ayana’s Native Chili Sauce) came into light in the aftermath of Typhoon Pablo, which hit the Mindanao region on December 4, 2012. Typhoon Pablo is considered the strongest tropical cyclone on record to ever affect the southern Filipino island of Mindanao, making landfall as a Category 5 super typhoon with winds of 175 mph. Coconut plantations, considered the top source of income among residents, particularly in the municipalities of Baganga, Cateel, and Boston in Davao Oriental, were heavily devastated. Aside from the lives lost, damage to infrastructure and crops were enormous.

However, with the intervention of DTI (Department of Trade and Industry), who is tasked to provide an alternative source of income to affected residents, and farmers, and other stakeholders, husband and wife Edlun and Maricel Ferrando promoted and initiated hot chili production and processing as one of the income generating projects, which became the centerpiece program in the area. Besides, chili production has a faster turnout compared to coconut. 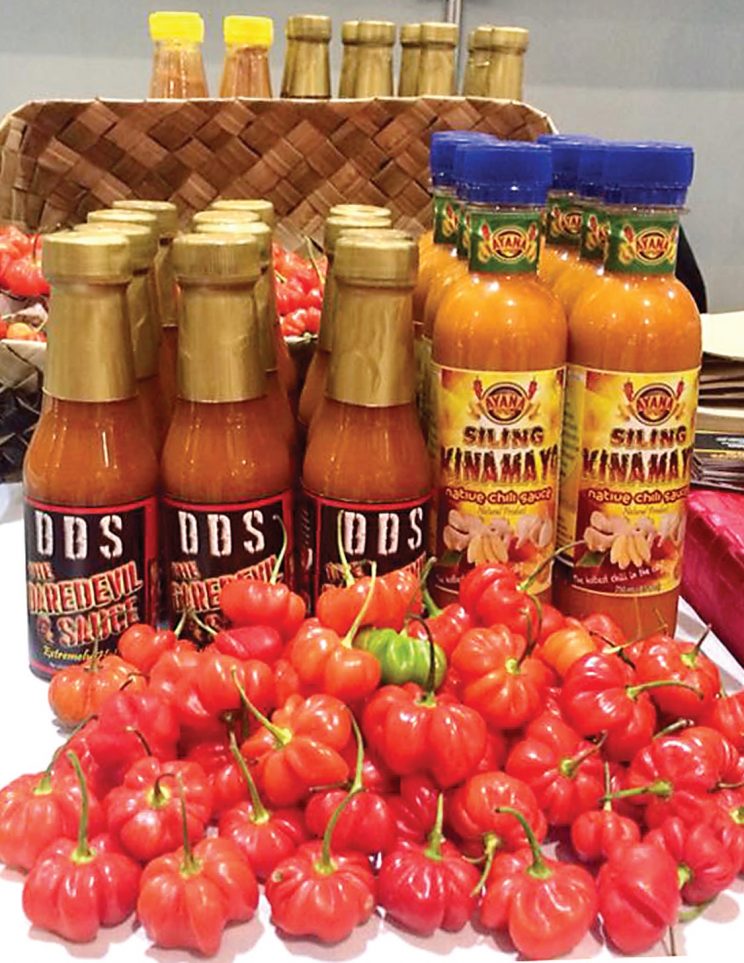 Ayana’s uses the Scotch Bonnet variety in their DDS or Daredevil Sauce product.

Right after Typhoon Pablo’s devastation, the DTI conducted livelihood training seminars, mostly for women farmers in the area, and Maricel Ferrando was one of them. The DTI discovered Maricel’s knowledge in making hot sauce, which she served to her customers in her small carinderia in Baganga before the onset of Typhoon Pablo. They saw the market potential of the sauce, that is why they invited Maricel and her husband, Edlun, to attend further training and seminars on product development, branding, and marketing.

With an initial capital of just P1,000, the couple bought a blender for P700, and P300 was allotted for the purchase of ingredients such as chili, garlic, ginger, and salt. The DTI provided the packaging. With just the two of them initially doing all the work requirements, their first production of chili sauce proved successful.

It was in August 2013 when the couple first joined the National Trade Fair in SM Megamall for market testing, which rendered fruitful results. The DTI nonetheless saw the market potential of their products, and so helped them further improve their products through continuous training and seminars. It was there when their production requirement increased with the demand for a bigger volume of ingredients. Determined to help their community, they sourced their raw materials from the 35 chili farmers in their locality. These chili farmers, who were also trained by the Department of Agriculture (DA) and the International Committee of the Red Cross after the onslaught of Typhoon Pablo, earn P120-R160 per kilo for the fresh chili, and P250-R400 per kilo for the dried chili. Ayana’s chili requirement per week is at 80-100 kilos.

With a sufficient supply of products and technical know-how in marketing, the couple became regular attendees of local and national trade fairs and exhibits, which gave more prominence to their brand in the market. The free tasting activity, which is usually part of these events, helped promote their products – their satisfied customers on site couldn’t agree more with their products’ distinctiveness and ‘hotness’. Cayenne pepper, or ‘siling labuyo’ as it is locally called, is the chili variety Ayana’s mostly uses in their products, as it is native to the Philippines and is also the variety preferred by most farmers in their locality. Chili, by the way, has been regarded for its natural health properties that include being antioxidant, anti-inflammatory, antifungal, anti-viral, mood enhancing, immunity boosting, high fiber, rich in vitamin C and beta carotene, and good for the heart and respiratory systems. The couple generated between P50,000 to P500,000 in income during those events.

At present, Ayana’s is commercially available at the Gaisano Grand Group of Companies in Mindanao and Visayas, as well as the Alturas Group of Companies in Cebu and Bohol, Victoria Plaza Mall in Davao City, and in local pasalubong centers. Their main outlet is located in Purok Padada-1, Central, Baganga, Davao Oriental. Just recently, Ayana’s also showcased their products at the International Food Exhibition at the World Trade Center in Manila, this time with the support of the Great Women Project 2 (GWP2).

Ayana’s is one of the MSMEs (micro, small and medium enterprises) endorsed by the Department of Science and Technology (DOST) Davao Oriental to the project, which aims to assist women micro entrepreneurs in making their businesses more sustainable and competitive. The Philippine Commission on Women, which is the project holder, together with other government and private project partners, help these enterprises improve their business skills, comply with government prescribed certifications or registrations, enhance existing products, develop new products, and bring these products to the market. Financial literacy is also included in the training to enable them to sustain and grow their businesses. The project funding is supported by the Canadian government.

Ayana’s is also one of the six identified members of Hot Pablo, an association of chili processors carrying the banner Davao Oriental Philippines Best Chili Products, a recognition given by DTI to chili processors in Davao Oriental whom they assisted and helped come up with a means of livelihood after the onslaught of Typhoon Pablo.

Additionally, Edlun was proclaimed winner of the 2015 AFPSLAI National Search for Outstanding Entrepreneur for having taken the culture of entrepreneurship to heart. And in 2018, Ayana’s was also named the Best Business Continuity Plan by the DTI National Capital Regional Office.

The majority of Ayana’s product line are spicy condiments. Their products’ distinct spiciness, flavor, and consistency make it different from other products in the market, as described by Edlun. The main ingredients are mostly native chili, coconut vinegar, and garlic. They process their products in their small processing area under the approved process flow of Food and Drug Administration (FDA). From the original Ayana’s chili sauce, which comes in 250 mL bottles at R105 for wholesale and P125 for retail, the company eventually introduced Ayana’s chili powder, chili flakes, whole dried chili, chili oil, spicy oil, suka-rap, sinamak, honey, turmeric, spicy honey, honey with pollen, corn coffee alternate, and ipil-ipil coffee alternate. They attributed the expansion of their product line through the knowledge they acquired from the series of trainings conducted by the GWP2.

Original package design is done by the couple, though currently, they are collaborating with the DOST Davao Oriental for a new label design for their whole product line.

Still in the process of first saturating the local market, Ayana’s is not yet for export, though they have sold to a lot of customers flying overseas, making their products the preferred ‘pasalubong’ to their loved ones abroad. At present, there are only seven workers, that reach up to 10 during peak season (from August to November), who are mostly women.

A source of inspiration

Edlun is a Physical Therapy graduate, while Maricel is a high school graduate; both didn’t have formal training prior to their business set up. At the time Typhoon Pablo devastated their area, their eldest daughter, Ayana (who their brands was named after), was a first year college student, while their youngest, Hosanna, was still in high school. However, with their persistence and determination to go on with their day to day lives and find a means of livelihood, their daughters were able to finish their studies as an Information Technology, majoring in Multimedia Systems, and Entrepreneurship, majoring in Agribusiness, respectively.

And seven years after the devastation, Edlun relayed that the chili farmers whom they are sourcing their raw materials from were able to rise up; their coconut plantations are starting to bear fruit once again, giving them additional means of livelihood, enough to bring back the life they had before Typhoon Pablo struck them.

To augment the volume requirement for their raw materials, Edlun and Maricel are planning to put up their own chili plantation in a five hectare land they were able to purchase in Davao. That way, they can also expand their production, as well as their market.

Indeed, with the aid from the government and private stakeholders working hand in hand to rise above every adversity, Ayana’s Siling Kinamayo is a hot and sweet blend of success. And theirs is just one of the many inspiring stories from the aftermath of Typhoon Pablo.

Weaving beauty and success behind every fabric

Study shows that leftover farm waste can be used as packaging