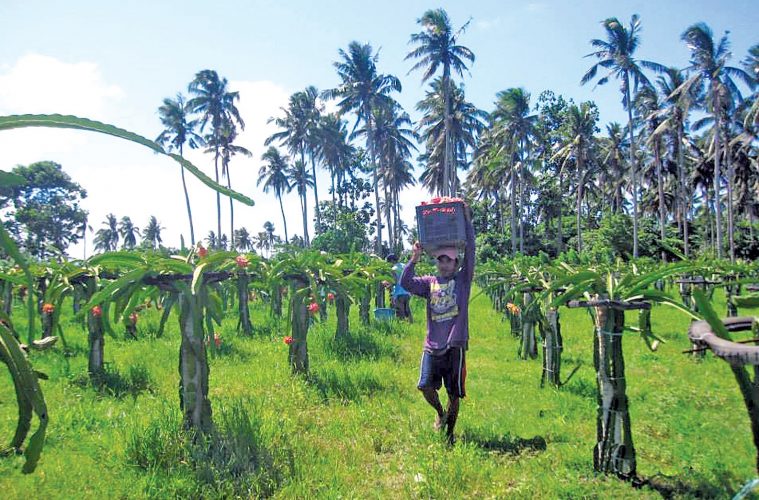 Creating a legacy through a dragon fruit association

Dragons are legendary creatures that are mentioned in the folklore of numerous cultures around the world. They are known for their fire-breathing abilities and other supernatural skills.

In the Philippines, however, an association of farmers in Cagayan deals with a less intimidating kind of dragon that also provides their community with a steady source of income. 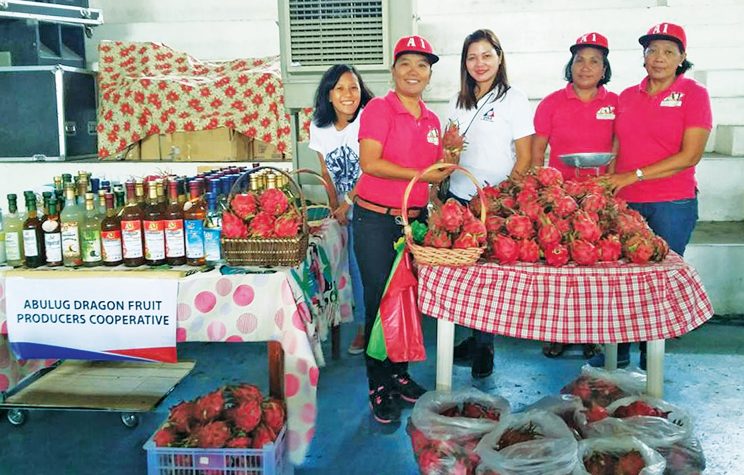 Dauphine Alviar (second from left) with members of the association during a trade fair.

Although dragons aren’t known to grant wishes, the association was initially formed to fulfill the request of Alvaro Domingo, who is fondly known as ‘Uncle Amboy.’

Before he ventured into dragon fruit production, he started by growing corn on his two-hectare farm in Cagayan.

“A friend of mine, Heriberto Romero, took me to visit Uncle Amboy’s dragon fruit farm. During our stay there, Uncle Amboy told me how we wanted to have a legacy that we can all share. He then suggested that we start an association of dragon fruit growers here in our province because he
believes that it is something that we can be proud of,” Alviar said.

Motivated by his dream, Alviar took the necessary steps to make it a reality. She talked to Orlando Barroga, the barangay captain in the area, in September of 2014 and asked if it was possible to set up the group.

Barroga agreed and convened the local dragon fruit farmers in the vicinity. After acquiring the necessary permits from the Department Of Labor and Employment (DOLE), the Abulug Dragon Fruit Producers Association became operational on November 3, 2014.

“To those who want to join our group, we only have one requirement: they must be dragon fruit growers situated in the municipality of Abulug,” said Alviar, the president and founder of the association.

She added that they don’t even ask their farmer-members to own a specific size of land to grow the crop.

During their first years, the association had a total of 50 farmer-members. But because of shifts in the economy, many were prompted to seek greener pastures elsewhere, leaving the association with 20 less members from the original census.

Nonetheless, Alviar and the other farmer-members are still living out Uncle Amboy’s dream to become an association whose pride is rooted in dragon fruit production. 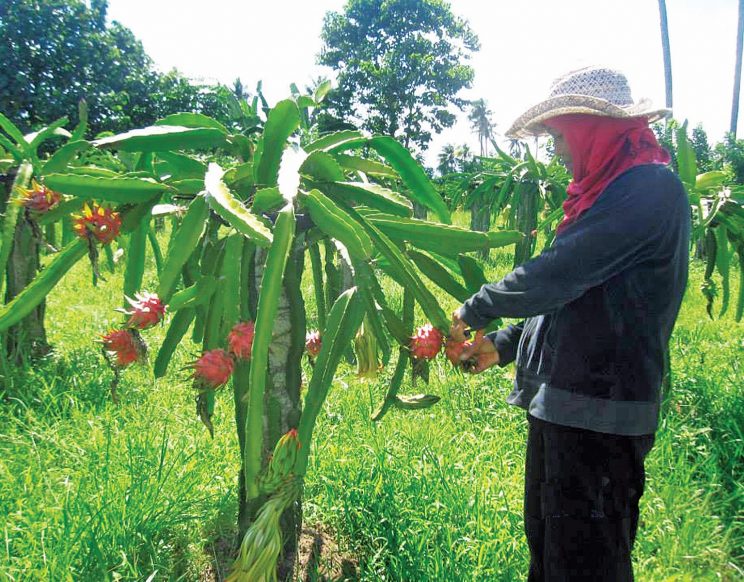 Farmers only need to be dragon fruit growers to become members of the association.

One reason why Alviar and the other farmers of Abulug decided to grow dragon fruit is because of its potential as a high value crop. A kilo of the crop fetches a high market price starting at P100 per kilo or higher, depending on the season.

Dragon fruit (Hylocereus undatus), also known as “Pitaya,” is a vining terrestrial cactus that produce fruits which are round, red, pink, or yellow, with prominent scales. It is usually grown in areas that have a direct exposure to sunlight; locations where rainfall is well distributed are not appropriate to grow dragon fruits because like cacti, overwatering tends to destroy its development. 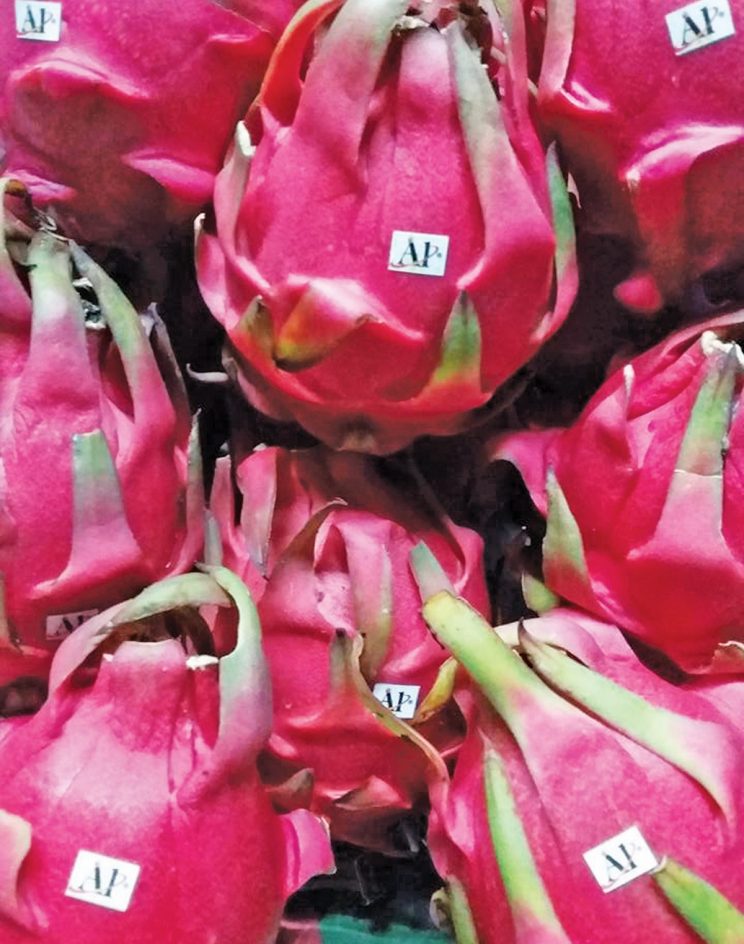 Pitaya is another name for dragon fruit.

Apart from it being a flavorful snack or dessert, dragon fruits also have numerous health benefits which its consumers can enjoy.

“They have lots of nutrients such as antioxidant properties to keep skin looking healthy, and the fruits are also high in fiber which is why people incorporate them in their diets,” Alviar said.

With only one prerequisite to
become a farmer-member, many
residents of Abulug decided to join the association as a way to open up new opportunities for them.

Alviar said that having both young and experienced farmers in the association proves to be beneficial for them as different generations come together to teach each other about various farming practices.

“More experienced farmers are consulted about traditional farming approaches since we don’t use any chemicals in growing dragon fruits. In return, the younger generation can also introduce new procedures,” she said.

The founder of the association, however, expressed her appeal for more of their farmer-members to attend seminars conducted by the Department of Agriculture and the Agricultural Training Institute so that more of them will have access to information that they could share with the group.

“Our farmers need to be resourceful so they can address any changes on their farm and eventually fulfill their needs,” Alviar said.

Despite the diversity in their association, the farmer-members still manage to harvest fresh dragon fruits from their respective farms.

A business and a social enterprise

With 20 farmers in their group, including Alviar herself, they had to find a means to sell their produce. They then engaged in value-adding and began processing their harvests.

“Our association makes goods such as wine, vinegar, jams, and jellies from dragon fruit,”
the founder said.

She added that the family members of the farmers in their association are the ones who
process the raw ingredients into the delicacies that they offer. This way, an involved family can earn more than their regular income from selling dragon fruit.

In order to promote their products to other regions and more people, the association joins trade fairs held in various locations around the country. Although they have plenty of wines and vinegars in stock, Alviar said that their jams, jellies, pickles, and chutneys have to be pre-ordered.

“Since our products are all-natural, the pectic enzyme of the dragon fruit which serves as a glue that holds plant cells together are still present, thus giving our jellies and jams a short shelf-life,” she said.

Despite focusing on dragon fruit as their main crop, the farmers of the association also
plant other varieties to keep a steady source of income, especially during the off season of dragon fruit.

According to Alviar, the farmer-members also plant other crops such as cucumber, coconut, dalandan, eggplant, squash, and more.

“We’re also a sustainable association as we strive to keep our farmer-members’ farms productive so we can keep showing other regions what we are capable of. Eventually, we hope that our efforts can also be recognized internationally,” she said. (Photos courtesy of Dauphine “Pinky” Navarro Alviar)