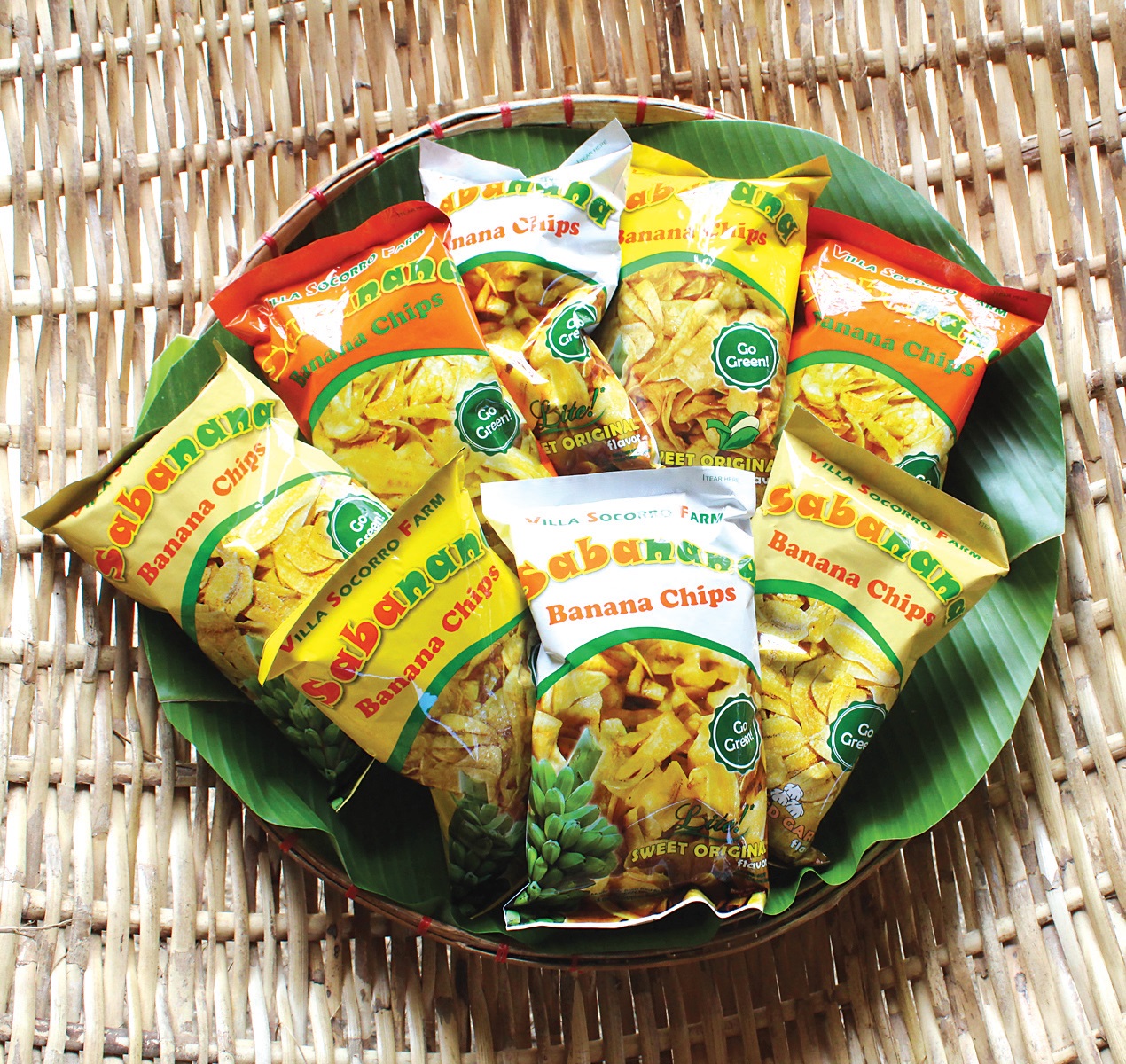 Villa Socorro Agri Eco-Village is a farm resort located in Pagsanjan, Laguna. The 11-hectare property sits at the foot of the Sierra Madre mountain range and is bounded by the Balanac river.

The property was originally intended to be a private farm, but in 2008, the owners decided to open it to the public. Now, it is a popular farm resort whose most popular product, banana chips, is exported to 15 countries including the US, Canada, the Middle East, and Korea.

The farm has rooms–some air conditioned, some fan-cooled, some of them themed–that are good for around 50 people. Most of the wood used to build the huts and furniture (fondly called ‘farmiture’) come from trees that fell during typhoon Milenyo in 2006. Guests can stay in quonset huts that were built as part of the set of the Kevin Costner film Thirteen Days. Film buffs will delight in the fact that the farm was used as a set for Vietnam War battlefields in the movie Platoon and in a Korean TV movie series. Bahay kubos are surrounded by fruit trees and vegetable gardens where produce is harvested for the farm restaurant and where guests can try their hand at farming if they choose.

Villa Socorro doesn’t have a pool, but guests are welcome to swim in the river. A small forest surrounds the path to the cool waters, with signs that encourage guests to forest bathe and enjoy the greenery that surrounds them. The food is excellent, too. The resort is famous for its boodle fight, where different dishes are laid out on a long table covered with banana leaves, and everyone digs in at the same time. They best way to enjoy a boodle fight is to eat with one’s hands, though utensils are on hand just in case.

The other thing that Villa Socorro is known for is Villa Socorro Farm Sabanana Banana Chips. “It started when we planted a lot of bananas. Biyaheros or middle-men would buy it from us at around 30, 40, 50 cents per piece. And as an entrepreneurial farmer–a farmer who would really want to have a business, that’s really not gonna work,” says second generation farmer Raymund Aaron, 32, Villa Socorro’s Banana Chief. “We wanted to add value to the banana so that we can really have a business for it. We [built] own banana chips manufacturing facility. It picked up and we started selling banana chips.”

Aaron credits his parents for igniting his interest in agriculture. “I really wanted to get into a career in social entrepreneurship, and being in a farm I would say, “nakatapak sa lupa,” (set foot on land) literally and figuratively. You’d have the biggest chance to have an impact on your community and that’s the path I really wanted to take,” he says.

Nowadays, the bulk of the saba bananas (Musa acuminata x balbisiana, particularly the Cardaba subgroup) come from the 100 partner farmers Villa Socorro works with. “We provide them the shoots that comes from the farm, they plant that, [then] after 18 months, when [it’s] ready to harvest, they harvest it themselves and they deliver it to our farm. We purchase it at prices higher than market value,” the Banana Chief says. “From then, we manufacture it in the farm. We start by peeling them and then slicing them in the process. After slicing, we fry, and then we let it settle a little bit. And then we pack, and then box it, and then out it goes into the world.”

Bananas are delivered daily, and are bought at P1 to P1.10 per piece. A partner farmer can stand to earn an average of P5,000 a month on bananas alone, provided the produce adheres to Villa Socorro’s strict standards. The farm buys an average of 25,000 bananas a day.

One banana is equivalent to one small pack of banana chips, which retails for P15, while the bigger pack goes for P45. The price goes even higher when sold overseas, with a small pack retailing for around 69 cents (P35.84) in the USA. Even with labor, cooking, and fuel accounted for, that’s quite a markup from a P1 raw banana!

The banana chip making facility currently employs 32 workers, many of them wives of employees or banana farmers who like the flexible schedule that allows them to tend to their family’s needs while working a day job. The chips are fried in big wok-like pans whose fires are fueled by rice husks bought from nearby farms. The facility has big windows that allow guests to view every aspect of the operation.

Running a farm and a banana chip making facility sounds idyllic, but it comes with its own set of challenges. First on the list is Mother Nature. “Bananas are not that resilient to typhoon so practically all the produce gets wiped out after a very big typhoon. That’s one big hurdle,” Aaron says. Second is constantly making sure that the products are up to par. “Especially since we export, we have to make sure that there’s a continuous check on the quality of the products,” he adds. 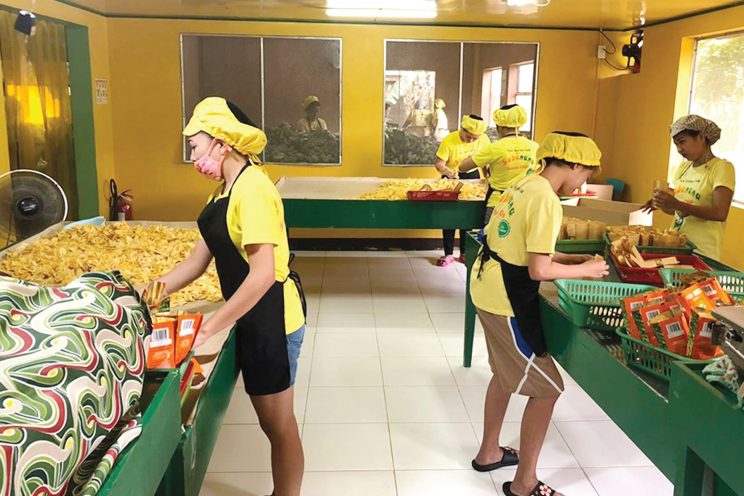 There is also marketing to think about. “We’re a small social enterprise trying to battle it out in the snacking industry, competing with bigger snacking brands,” Aaron says. “You really have to be resourceful in terms of getting your brand out there both in terms of marketing and distribution.”

What Aaron likes to emphasize is the importance of value-added farming, or the farmer as an entrepreneur. “The idea would be to add value to your crops. Don’t just sell it as is. Don’t just sell a banana as a banana. Try to add a process so that you can add value to [the crop] and sell it at a price where you can make a profit,” he says. And in this case, not just a profit for yourself but also for your partner farmers and community.”

In Villa Socorro’s case, this means buying bananas from farmer partners, employing their wives in the manufacturing facility, and organizing catechism classes that their kids can attend, and afterwards holding anticipated mass that the families can celebrate together. “We really call ourselves “Villa Socorro Agri-Eco Village” which means it’s really a community of ourselves as a business, but at the same time, all the farmers within our community,” Aaron says.

For the Banana Chief, this is just the beginning. His goals are bigger. “We’re really trying to break the boundaries of agriculture. We can’t solve problems in agriculture doing the same we’ve been doing for the past 50 years. Obviously it’s not working. We have been continuing in trying to find innovations in agriculture and trying to take us to the next level–take us into the future by value-addition, increasing productivity, increase profitability, and that’s where we really want to take the business moving forward,” he says.

The farm has just launched a new brand called Farmony (to represent ‘the harmony between farms’), a higher end brand whose two products so far are caramelized sugar-flavored banana crisps and wasabi shoyu flavored corn pops. “We really want to make use of our experiences, our learning from the past 10 years, and pass it on to have a bigger impact,” Aaron says. “We partner with other manufacturers, other social enterprises in particular, wherein they can replicate things we do with their own partner farmers so that we can, again, have a bigger impact not just in our community, but also in other communities.”

Aaron has a few words of advice for people who want to get into agriculture, and hopefully, exporting. “With all the information out there, you just have to continuously know what you should be doing, so just seek help from partners like government agencies or other people who have been there,” he says. “Get your hands dirty. That’s how it starts.”

Formulating a healthy soil mix for your cacti

Master a special skill that can make you rich