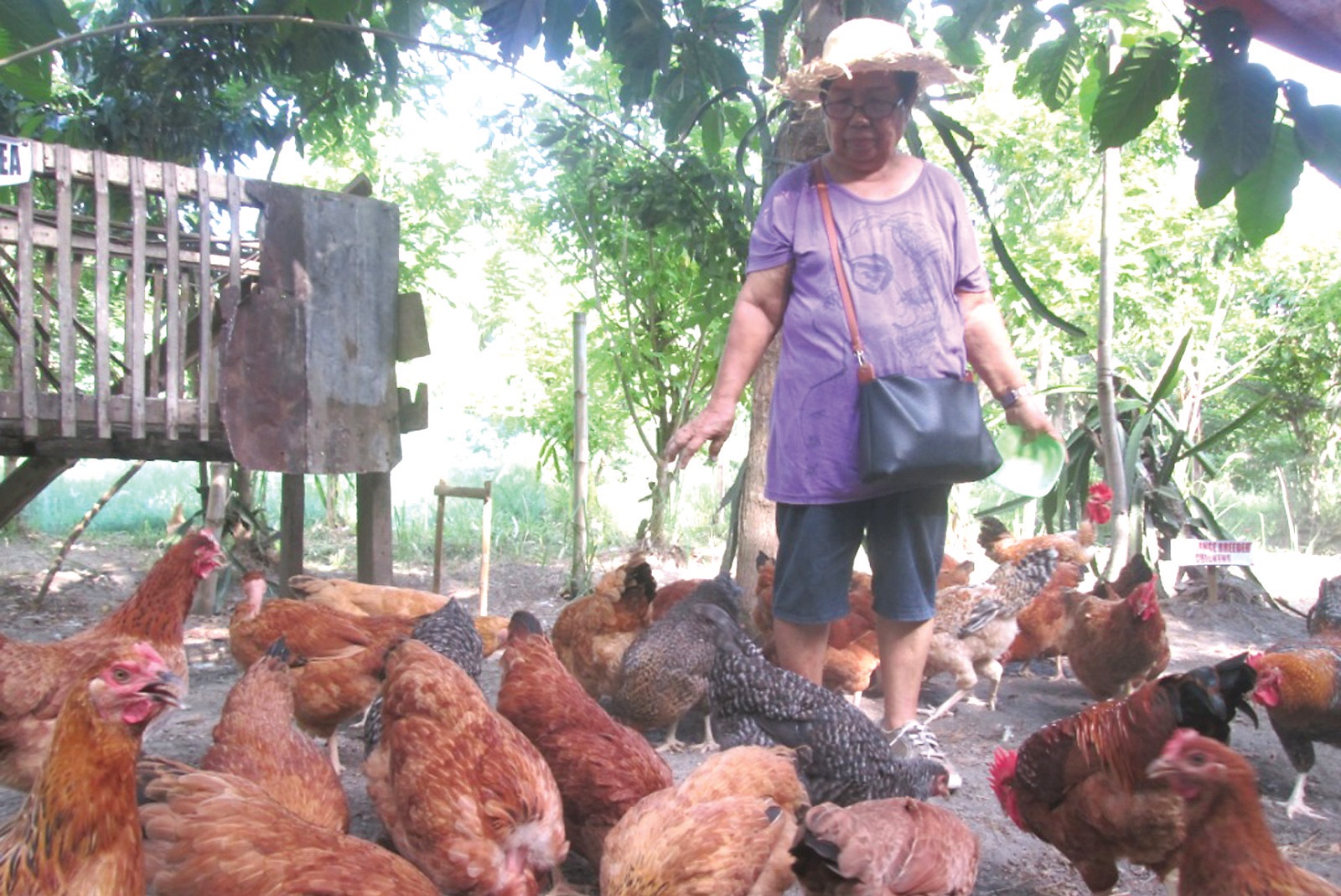 Most retired employees want to enjoy the rest of their days, relaxing and having fun with their families, visiting gorgeous places and vacationing in different tourist destinations. For 80-year old organic farmer Coree Garduque, fondly called Nanay Coree, from Midsayap, North Cotabato, no experience can ever replace the fulfillment of farming. “The dawn of loving organic farming has just started,” she said.

Garduque graduated from B.S in Agriculture from the University of Los Baños in Laguna in 1959. After graduation, she worked for three months as a contractual worker at Bureau of Plant Industry (BPI) under the Plant Quarantine Service, particularly in the biological control of insects in Cebu. She was later transferred to the Mindanao Rice Experiment Station in Rice Production as a seed analyst where she met Alfonso, her husband, who happened to be working in the same office.

Her engagement with the government lasted for 13 years, while her husband stayed on for two more. After their resignation, a closed friend convinced them to venture into the chemical and fertilizer business. They gave it a shot, and soon, the couple were running the only agri-chemical store in their hometown in Midsayap, North Cotabato. The said business lasted for almost two decades. From it, the couple were able to support the schooling of their two children in Manila. 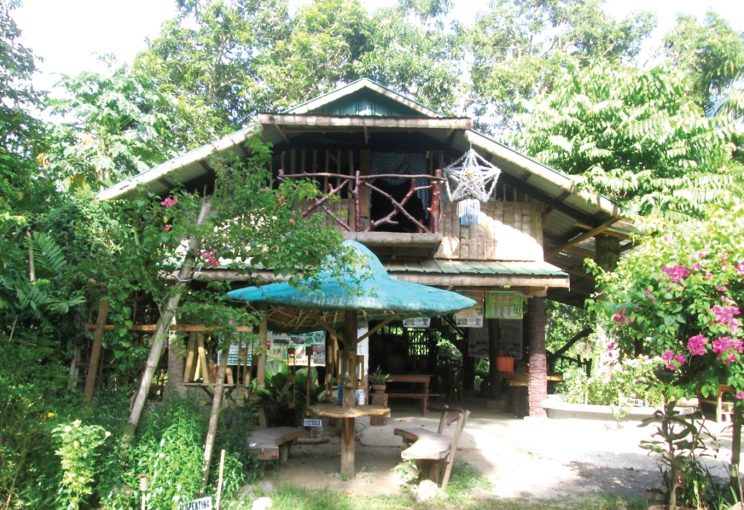 The small dormitory building houses participants who want to experience the farm environment. This is perfect for various events like training, family retreats, recollections, and those who want to escape the competitive lifestyle of the metro for a while.

While managing their agri-chemical store, Coree and Alfonso also planted some high value crops consisting of coconut, rambutan, and pomelo on their 2.5 hectares of agricultural land, which Alfonso inherited from his parents. They also had different fruit trees like Magallanes pomelo, coconuts, durian, avocado, and mangoes. This was in 1981.

The farm became productive, with the couple harvesting the fruits of their labor. Different high-value crops became another source of their income and supported their children’s school expenses and allowances.

“Our life was really sailing good because of that kind of business. But in 1995, I got sick, with almost six months of on and off cough, and my body continued to become weak. Most of our income from our agri-chemical store just went to my medication,” Mrs. Garduque recalled.

In year 2000, they closed the store and decided to concentrate on their farm. They used raw coconut materials to build a simple hut in front of the farm perimeter. “That was the only time I realized that my health was affected by the chemicals we were selling. From that year on, it twisted my focus on conventional farming and shifted it to organic farming,” she added.

After the sad experience and realization, Mrs. Garduque started joining groups who advocate organic farming. As part of actual reintegration process on natural farming, she joined the social action ministry of their church.

“I started to volunteer as facilitator of organic agriculture. I regained my strength and continuously inspired our local farmers to revive natural farming so it could become part of their system again,” she said.

When not at the church events, Mrs. Garduque spends her time improving her farm setup. Although hindered by the circumstance of not receiving all out support from her children, she continued developing the farm. She credits part of her success to friends who always inspired her to continue her advocacy.

She started to revive the beauty of their farm sanctuary once started by her late husband Al, who had died some years ago. The existing fruit trees in the farm like rambutan, durian, and coconut trees become productive again.

“I hope to inspire other farmers and make them realize that farming is a promising livelihood if coupled with love and passion. Life is so short. For me, every hour, every minute counts and God is here to give us something to while away our time, especially at my age. Let us continue to live and love. We have to leave something valuable for the future generation. Live simply and not too lavish,” Garduque said.

In her leisure time, aside from watching her favorite teleserye, Nanay Coree also keeps busy raising her new pets–the ducks that roam in the farm. She also shares her expertise in poultry raising with local farmers and visitors.

“Feeding the ducks and chickens relax me,” she said. “It’s fun to watch them lay eggs. I always tell visitors that it’s not impossible to raise chickens if you persevere at it.”

She shares her passion for farming on social media through her hashtags #kahitsagingbastaloving and #kahitginamosbastacoryliciousayos.

Through her persistent advocacy and practices, Nanay Coree was able to connect with the Department of Trade and Industry (DTI) and Department of Agriculture DA), which offered her free seminars and training on food processing, labeling, and product packaging. She also started to make jams made of durian, coconut, and even rambutan.

She was able to help some women in their neighborhood gain a P300 additional income as on-call staff to maintain the farm’s vegetable garden and fruit trees.

Nanay Coree never thought that her simple farm would one day become a learning center that would expose families and students to farming.

In 2015, one of her friends, a colleague from a private school, convinced her to establish a learning site. She also joined the Kapatid Mentor Me Entrepreneurs (KMME), a holistic program of DTI that aims to help local and aspiring business enthusiasts gain inspiration in putting up a possible venture.

From that comprehensive training, she become motivated to push for organic technology in the farm and sustain it.

She said that having a dream to establish a farm is not measured on age and technical know-how. It is about discipline and motivation to make organic farming a reality. “I never dreamed that I can still organize this farm as a senior citizen, but with the good people around me, this is becoming a reality,” she said.

The farm acquired its name, AlCor Farm, from her husband’s name Al and Coree, her name, and is located at Barangay Central Glad in Midsayap, in the province of North Cotabato. It also has dormitory rooms for those who opt to stay on the farm, and a session hall that can cater to at least 100 participants.

From an ordinary farm, AlCor has transformed into a venue for various events for training and learning. Students from the town proper choose the area as a venue to increase their knowledge on agricultural practices and techniques.

With this distinction, AlCor will become the center for agricultural training exposure and benchmarking of the local farmers and farm enthusiasts from the nearby areas.

Green therapy: Gardening as healing for millennial with bipolar disorder