Lukong Valley Farm, a farm resort in Dolores Quezon, gets its name from the Tagalog word for bowl. This is in reference to the farm’s bowl-like shape due to its location between three mountains. Which mountains surround it will depend on where you are in the resort, but from the farm, it’s Mt. Banahaw in the south, Mt. Cristobal in the east, and Mt. Masalukot in the west.

The farm is divided into two parts: the resort and the farm itself. Part of the resort is located on an elevation that looks out onto the farm, which rests on the bottom of the valley and also includes the rest of the resort’s amenities. It is a scenic, almost 11-hectare sprawl.

At the time of the interview, the elevated part of the resort was composed of four themed cottages, all of them with windows or balconies boast a prominent view of the dragon fruit farm below. There is also an open-air hut where guests can dine or gather for activities like karaoke. Beside this is the building that houses the kitchen and a smaller dining area.

The farm began construction in 2014, and by 2016 was growing dragonfruit and attracting visitors, even though they weren’t officially open as a tourist spot. Encouraged by this, the farm began renting out accommodations and officially opened itself to the public a year later. 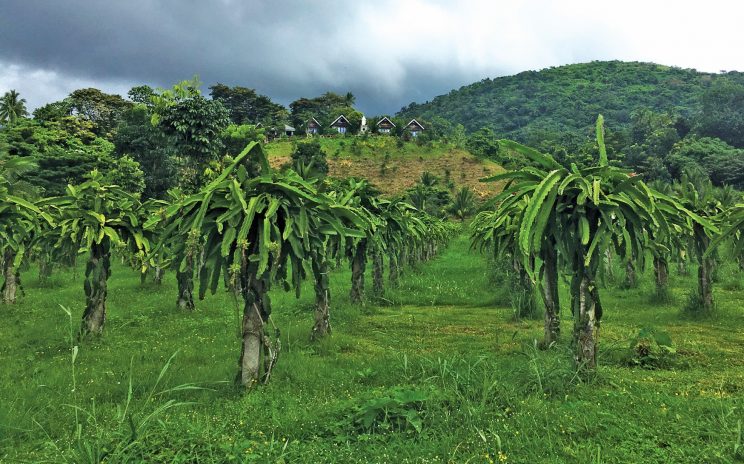 The dragon fruit farm as seen from the ground, with the guest houses in the
distance.

Lukong Valley is an integrated farm. They have fruit-bearing trees, vegetable plots, medicinal and ornamental plants, livestock, an apiary, a greenhouse for seedlings, and organic input-making facilities like a wood vinegar still and vermicompost pits.

They keep stingless bees to encourage pollination, as well as for their honey. They currently have 25 colonies, but are planning to expand to at least twice that amount.

They grow high-value crops like chilies, cabbage, tomato, and eggplant. The produce makes it to the kitchen and is sold to guests and direct wholesale buyers who supply vendors in places like Divisoria.

“Our soil is clayish, but we cultivate everything as organically as possible so that our soil remains healthy,” Ruel Calinisan, Farm Manager and VP for Operations says in Tagalog. “We have vermicast and also use cocopeat and CRH-carbonized rice hull. We mix them into the potting mediums of our plants, along with the application of basal (fertilizer).”

He adds that they also practice crop rotation.

Soil health is extremely important in an integrated farm setup, and there are several processes set up to ensure that the soil in Lukong Valley is always full of nutrients. “In an integrated farm, animal and plant waste such as fallen leaves gets turned into compost,” Calinisan explains. 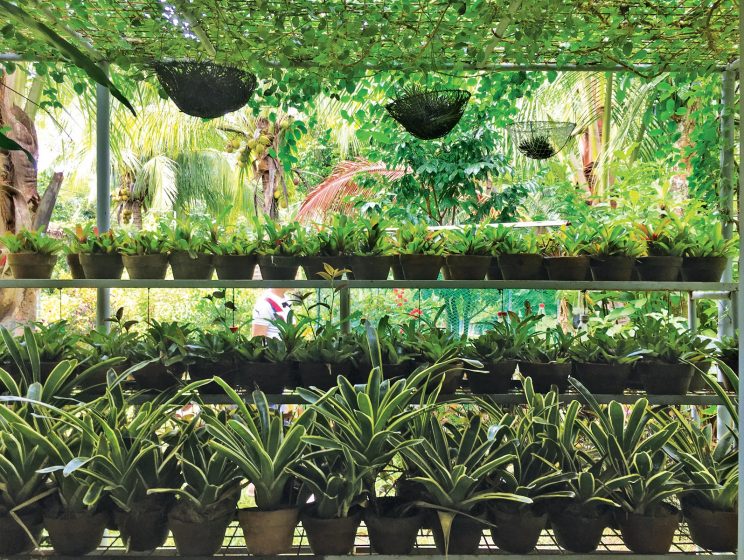 Nothing goes to waste. Cut grass is saved and given to guests who want to experience feeding the black pigs kept on site. “We make our own insecticides and pesticides. We also make mokusaku (Japanese wood vinegar) using pressed scrap wood and coconut husks,” he says, adding that they also turn coconut husks into charcoal, which they use to heat the condenser used to make wood vinegar. “We spray it on our ornamental plants and vegetables (as a fertilizer),” he says

Though Lukong Valley Farm looks idyllic, as any farmer will tell you, it takes effort to run a farm well. “One of our challenges is climate,” Calinisan says. “Sometimes, when there’s too much rain, the plants take longer to grow. Sometimes, if the winds blow when the plants are in the wrong condition, it can wreck them.”

Despite the yearly threats from natural disasters the country faces, Calinisan remains cheerful. “The benefit (of running an integrated farm) is if (crops) get damaged, they don’t go to waste because we can feed them to our chickens or native pigs.

Lukong Valley Farm gets a chunk of its revenue from its visitors, who like to drop by the farm for day trips, events, and overnight stays. Aside from the four guest houses that overlook the valley, the farm area has four bahay kubos for rent, a campsite, and a pavilion for events. There is also an honesty store and a souvenir shop that sells products such as coffee and turmeric tea, all made by barangay residents. There are many things for visitors to see and do.

The farm has a small garden dedicated to herbal plants. Called the Farmacy, the garden consists of medicinal plants, all of them labeled with their common and scientific names and their uses and preparation. Plants include insulin (helps with diabetes), tarragon (aids digestion), oregano (may decrease inflammation), sambong (an expectorant), and citronella (repels mosquitoes). The plants are for sale, but even visitors who opt not to buy leave having learned something. Oftentimes, they already have some of the herbs growing in their own homes and reading about their uses on the signs in the garden encourage them to use herbs as medicine in their daily lives. “Somehow, it helps them,” Calinisan says. 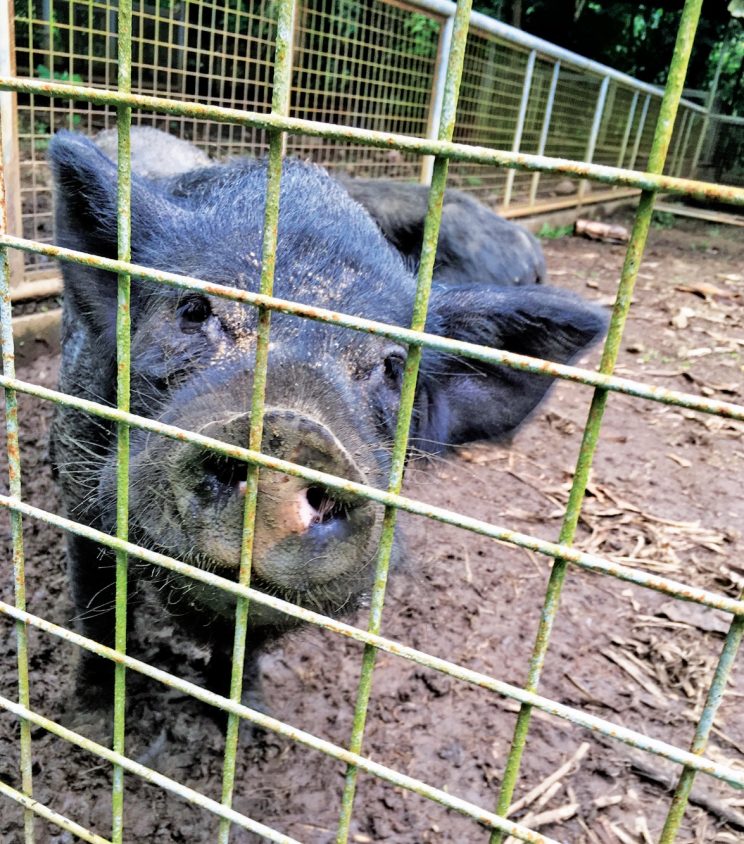 The farm keeps naturally-raised native pigs. Guests can feed them for fun, or can request them for the dinner table.

There is also a chicken park which houses different breeds of chicken, some of them expensive and hard to find in the Philippines, as well as a native pig pen. Aside from these, the farm also keeps geese and native goats. “We left some of the trees that were on the property before it became a farm, and this is the area where we keep the animals. We want every place to have a purpose,” Calinisan says.

The chicken and pigs can be served to guests upon request. They too, are as naturally grown as possible. The farm grows azolla, which is extremely nutritious as chicken food. The pigs are fed darak, or rice bran, among other things instead of feed.

When in season, the farm also offers a pick-and-pay program for their dragon fruit farm. The almost 800 dragon fruit trees lined up in rows is an impressive sight both on the ground and when viewed from the elevated guesthouses. They also offer demonstrations on different farm skills such as the propagation of seedlings and transplanting of crops.

According to Calinisan, the farm earns just as much from its visitors as from its harvests. “Visitors say that they enjoy relaxing on the farm, that you could go deaf from the quiet!” Calinisan says. “First of all, we’re far from the pollution (of the city). The fresh air here is really enjoyable. You can also hear different bird calls, especially during sunrise.”

The farm also offers farm-to-table dining. The cuisine is mostly Filipino. They make a delicious tinola, its broth deep and rich and surprisingly peppery. Other examples of their repertoire incluse kulawo, a cooking method popular in Laguna and Quezon that uses coconut cream squeezed from smoked coconut meat as liquid in an eggplant stew. The Lukong Valley version uses banana heart, and the dish is given a slight tang with vinegar from Bikol. There is also liempo, or grilled pork belly, and bihon-que, chicken soup cooked with noodles and chicken strips. Calinisan says that most, if not all all their ingredients are hyperlocal, sourced within Dolores. For dessert, they can offer sugar dragons, tiny but sweet dragon fruit harvested on the farm.

Lukong Valley sometimes has special events. This year, for example, they have a special Valentine’s Day treat for couples who want to dine on the farm. They also have meal bundles and can prepare boodle fights for in-house events or groups on day trips. “We can arrange everything as long as it’s coordinated sa amin ahead of time. Sometimes we receive requests for wedding proposals. We accept wedding reservations and prenup photo shoots,” says marketing head Jenny Edjan.

Calinisan says they average about 300-500 guests a month, which peaks on weekends and holidays. He surmises that the farm earns around 1 million pesos annually from produce and tourism combined.

The farm is continually trying to improve on its offerings. Future plans include the construction of classrooms so that the farm can become ATI (Agricultural Training Institute, the teaching arm of the Department of Agriculture) and TESDA (Technical Education and Skills Development Authority)-certified learning sites, which will allow them to teach future farmers the skills needed to run a successful farm.

It’s not just guests who have found peace in Lukong Valley Farm. Calinisan confesses that he feels the same way. “I grew up on a farm. I went to college but ended up back on a farm because farming is where I’m happy.”

Green therapy: Gardening as healing for millennial with bipolar disorder