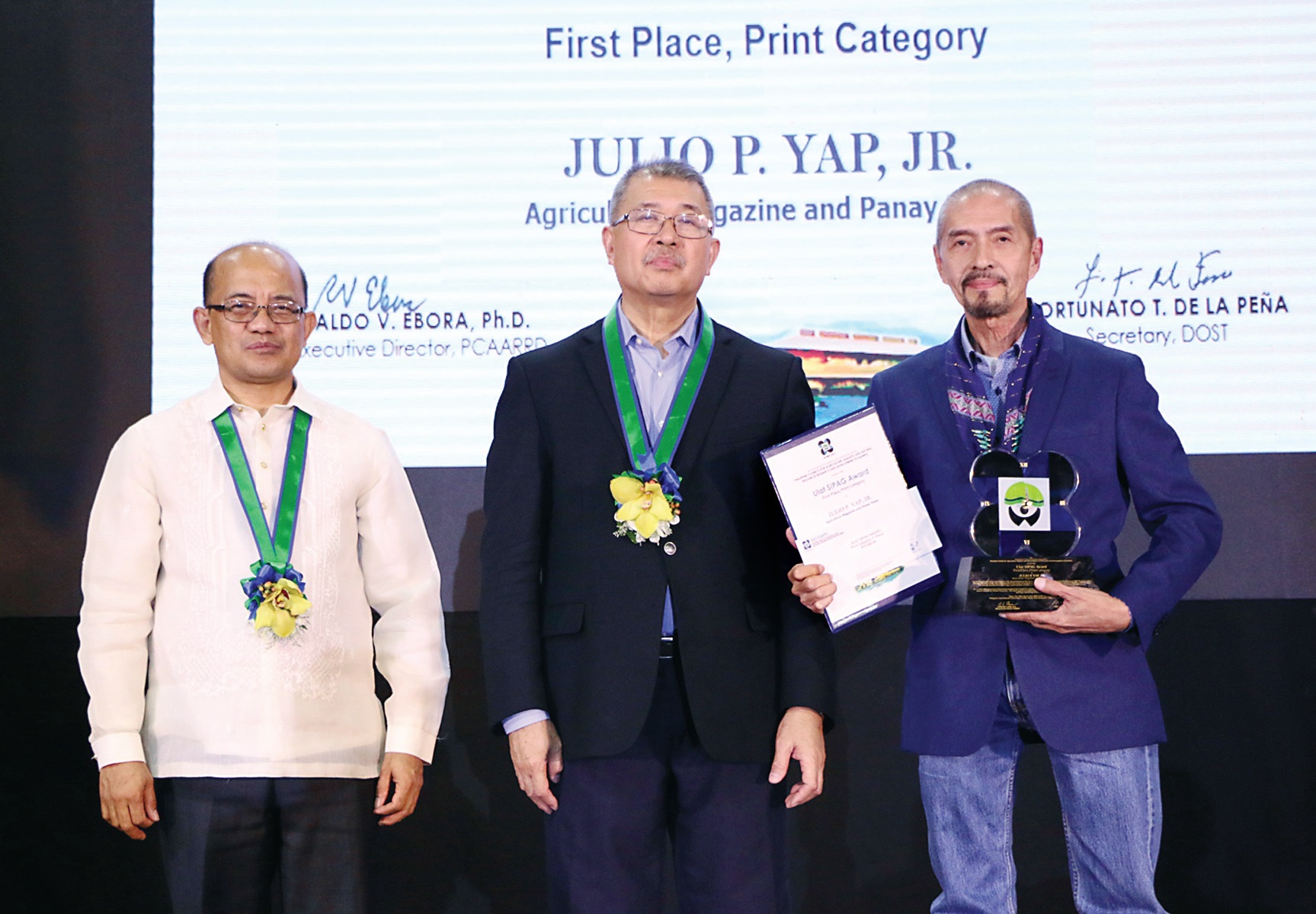 Yap, who is fondly called “Jaypee” by family and friends, won again this year’s top prize in the print category of the Ulat SIPAG Award for his articles showcasing PCAARRD’s projects in the different regions of the country that were published in the Agriculture Magazine. This is his second year of winning the top award for the said category. In 2017, however, Yap won the third prize during the award launching. The Awards have been held annually to boost the Council’s branding initiative, which currently focuses on promoting the Strategic Industry (S&T) Program for Agri-Aqua Growth (SIPAG).

The awards were divided into two categories: print and broadcast. Awardees were selected based on their outstanding contributions in showcasing the different commodities under PCAARRD’s Industry Strategic S&T Program (ISP).

On Yap’s part, he was cited in featuring PCAARRD’s initiatives in some of his articles which include, among many others, the development of a chicken strain under PCAARRD’s ISP on native chicken as a source of additional livelihood for farmers and other sectors of society; PCAARRD’s support to boost the Philippines’ fruit industry through its ISP on native fruits; and the PCAARRD’s support to the country’s ailing mungbean industry under its ISP on the commodity.

Moreover, Yap highlights PCAARRD’s frontline services and its biological-based approaches for cacao pest management under its ISP on the country’s cacao industry; PCAARRD’s funding support for seven production initiatives for the country’s goat and bamboo producers and processors; and PCAARRD’s ISP for rice which aims to increase productivity and modernize rice production and post-harvest systems in the country in his news articles released in a period of one year. Indeed, Yap’s diligence paved the way for his Ulat SIPAG award.

Prior to writing for Agriculture Magazine, Yap worked as a deskman for Manila Bulletin. He had also affiliations in the government sector as a City Information Officer and as an Artist/Illustrator brought by his talent in designing, being an Architecture graduate from a leading university in Davao City.

Why did he land a job in the publishing industry given these credentials? Yap shares that he was exposed to writing when a close friend hired him as a political consultant, where he later became his spokesman. This led him to dealing with the members of the media. Later on, offers for him from other politicians to be their PIO (Public Information Officer) grew.

“Following my stints with the different politicians, I tried to apply with a national newspaper as a contributor where the editor-in-chief at that time trained me as a desk editor. After a brief stint with the said newspaper, I started to get offers from two other newspapers,” said Yap.

Then in the later part of 2008, Yap tried his luck and applied as a deskman at the Manila Bulletin where he was eventually hired on a six-month contractual basis, and later on appointed as a regular deskman in 2009 until his retirement in 2014. Following his retirement, he started writing stories for Agriculture Magazine as a contributor. And the rest is history.

Following Yap in the second and third place are Cecilio T. Gunio of Manila Standard, and the late Anselmo Roque of Punto! Central Luzon, respectively.

All five awardees displayed their commitment to the cause of responsible journalism for the interest of the country’s farmers and fisherfolk. Adhering to one of the Council’s mandates, their articles and radio programs have greatly benefited in improving a great number of lives in the agriculture, aquatic, and natural resources (AANR) sector.

The awards were given during the S&T Awards and Recognition, coinciding with PCAARRD’s 8th anniversary celebration held at the Philippine International Convention Center in Pasay City.

Incidentally, Department of Science and Technology (DOST) Secretary Fortunato T. de la Peña, in his keynote message during the event, challenged the Council to address regional needs and to do something about the growth imbalance or inequality that President Rodrigo R. Duterte aims to address. He noted that agencies should work together to achieve complementary, synergy, and do away with duplication in research activities, giving importance to partnership in accomplishing such goal. (Photos by Regie D. Mason)

For more information, visit the Philippine Council for Agriculture, Aquatic and Natural Resources Research and Development of the Department of Science and Technology (DOST-PCAARRD).

Houseplants may help people suffering from anxiety, loneliness, and depression

The ‘Bamboo Lady’ of Los Baños