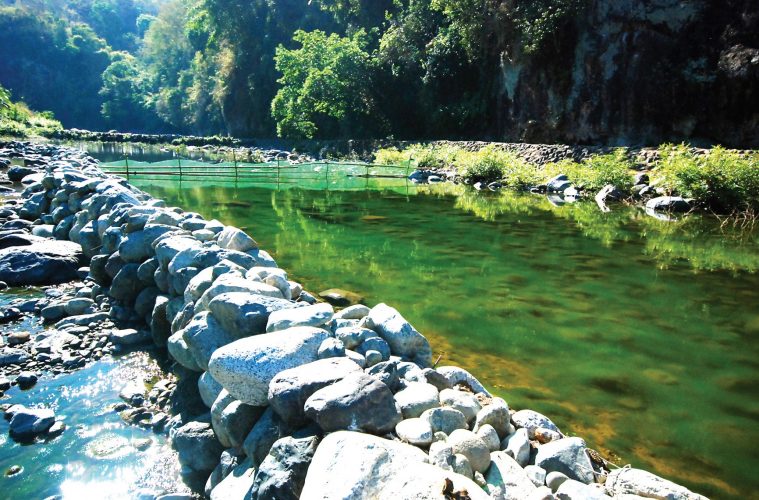 Growing tilapia in a raceway

Raceway, or flow-through system, is one of the earliest methods used to culture freshwater species. It usually consists of rectangular basins or canals with an inlet and outlet wherein continuous water flow in and out to provide the required level of water quality.

In today’s modern times, this traditional method of growing aquaculture species is still very much alive and thriving among the Maeng Tribe in Tubo, Abra, a distant area in the North Philippines, which is home to around 6,000 people who are bound by their instinctive desire and love to conserve and protect their natural resources. Surrounded by endless mountains and rivers, the Maeng Tribe has kept their culture and traditions intact, and their people peace-loving and united.

One indigenous practice that has survived through time is the Lapat system. Lapat, which literally means “to prohibit” or “to regulate”, is a century old system of regulating the use of natural resources and its biodiversity. The system has three underlying principles: 1) stewardship, 2) communal ownership and collective responsibility, and 3) sustainability. The system is enforced by the Dap-ay, a system of governance of the Maeng Tribe for managing and directing the socio-economic, cultural, political and spiritual life of the people of the community. They are mainly consisted of elders in the community. 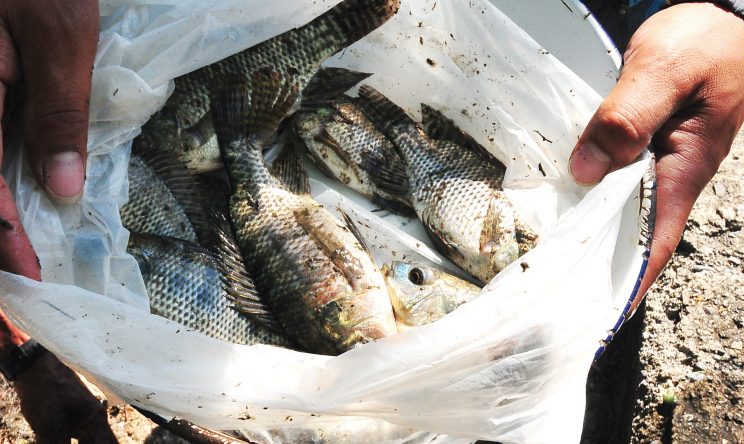 Merging indigenous practice with a relatively new concept is never an “either-or” issue. Previous experience showed that harmonizing traditional and modern technologies can bring forth better chance of success in terms of better productivity and profitability for the farmers. Indigenous knowledge and practices, when given due consideration in introducing new technology or intervention, have a higher chance of producing successful generation and adoption at the farm level.

This was particularly proven true with the project, “Community-based Participatory Action Research (CPAR) on Tilapia Production in Fishponds” funded by the Bureau of Agricultural Research (BAR), and implemented by the Bureau of Fisheries and Aquatic Resources-Cordillera Administrative Region (BFAR-CAR).

CPAR, a flagship program of BAR, is a location-specific research-cum-extension activity that aims to improve the productivity and profitability of farmer-beneficiaries by applying effective total farm productivity within the context of a sustainable production and farming system approach.

Initially, the project was implemented in two barangays of Tubo, Abra, namely Tubtuba, and Dilong, with 70 fishfarmers as project cooperators.

“We introduced the concept of CPAR in Tubo, Abra with the aim of improving their existing culture of tilapia following a semi-intensive culture system. We would like to introduce an intervention that will not contradict their indigenous practice, which in this case, is the Lapat system,” explained Lois June B. Fermin, assistant regional director of BFAR-CAR and CPAR project leader. She added that since CPAR is a research activity, the project aimed to institutionalize participatory approaches in the conduct of research and extension, and encourage and enhance the development of enterprises and agribusiness ventures through enhanced tilapia production in the area. 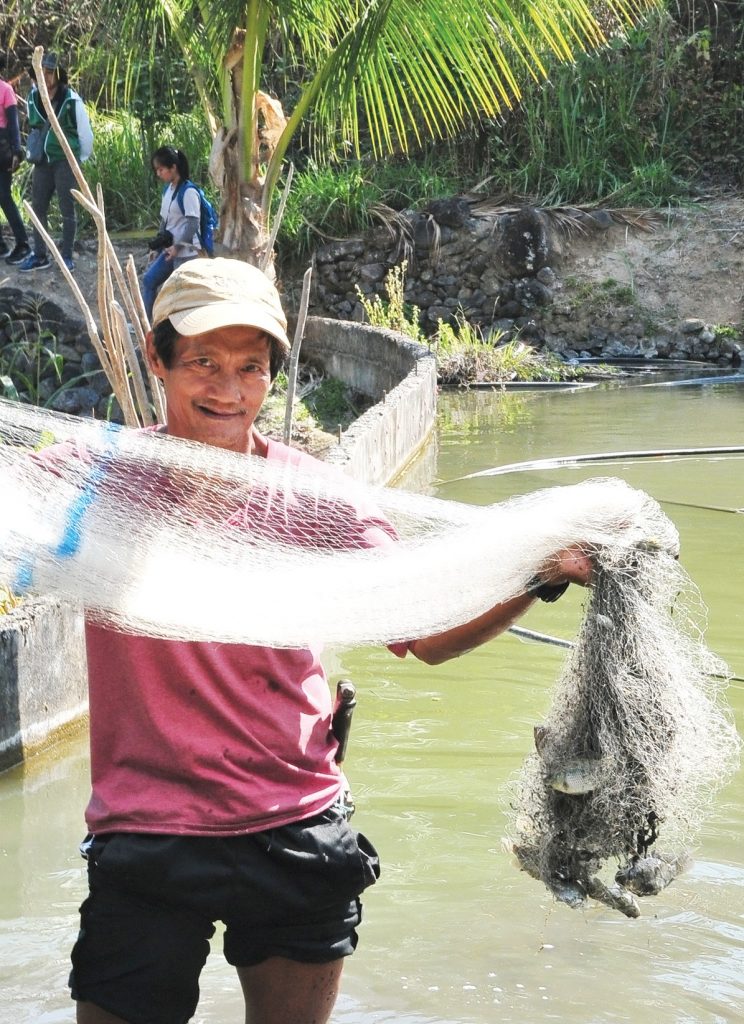 Manggalis, a CPAR beneficiary, shows his catch from the raceway.

In Tubo, Abra, aquaculture is a promising industry, and tilapia (along with carp, eel, gobi, etc.) is commonly being cultured.

Given the difficulty of buying fish due to the area’s remoteness and the land barriers surrounding the community, people are learning to culture commercially demanded fishes like tilapia. They grow tilapia both as a source of food and as a livelihood, making aquaculture an important sector in the municipality.

As part of the environmental practice of the Lapat system, fish farmers in Tubo, Abra grow tilapia through the raceway system. The raceway system is implemented along the riverbanks. It divides a portion of the river where commercial tilapia are raised but not fed with commercial feeds, relying only on the available natural food. The fisherfolk pile stones to divide the river into terraces which act as barriers to prevent the escape of the fishes. This type of operation can be done by individuals, household or a group of fishfarmers stocking fish in the raceway that feed on existing food in the environment such as bagiw or lumot (algae) and phytoplankton.

As part of sustainable fishing, the Lapat system prohibits and discourages the use of destructive fishing gear, chemical spraying near water bodies, and catching the young of fish species, and promotes the observation of close season or no fishing on specific periods of time. This kind of system enables the continuous reproduction of fish species, addresses resource degradation, and enhances the adaptive capacity of the ecosystem.

Part of the intervention of the CPAR project is the introduction of the fishpond culture technology. “The fingerlings are stocked in the Lapat raceway in the river in November or December. These are harvested before the rainy season to prevent the fish from being carried away by strong rains,” explained Fermin. She added that because most of the fishponds are small, the fish get crowded when they grow, thus, they are returned to the raceway after the rainy season. “In April or May, they are transferred again to the fish pond until they reach their marketable size,” she added.

Another intervention in the CPAR project according to Fermin is the introduction of good quality fingerlings. She said, “one of our interventions is the use of a tilapia strain which is not inbred. Because in their old practice, they just return the fingerlings of the tilapia they used to breed so the growth is slower. The very reason we supported them with hatcheries was to maintain the quality of fingerlings or stocks.” 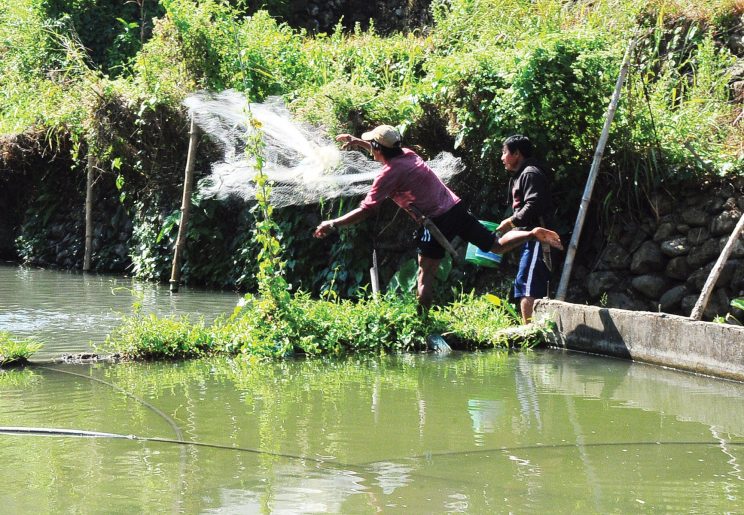 Through the project, BFAR provided a micro-hatchery in Tubtuba which became the source of tilapia fingerlings for the two CPAR sites in Tubtuba and Dilong, Tubo, Abra.

The CPAR project was initiated in 2012 and until now, many of the cooperators have continued adopting the interventions introduced to them through the BAR-BFAR project. Two of them were Paulo Pacdiw and Eliseo Manggalis of Brgy. Dilong, Tuba, Abra.

Paulo Pacdiw, 58, was one of the original CPAR farmer-cooperators when the project was initiated seven years ago. He mentioned that, after six years, many farmers have adopted the CPAR technology. “They realized that tilapia breeding is better because they can sell them, while at the same time, giving them something to eat when they need them.” Aside from tilapia being a source of protein, Pacdiw mentioned another advantage of having his own tilapia pond, “In terms of income, I could readily have the means when my children need to pay their tuition fee in school,” he said. Pacdiw also sells fingerlings, P200-250 a kilo to his fellow fishers who need it.

Meanwhile, Eliseo Manggalis, 60, is part of the second batch of 20 fishers who got into CPAR in 2015. He recalled that he adopted the CPAR technology upon the encouragement of their municipal agriculturist.

“The usual practice here is when somebody does something, and other people see that it does good things for them, they will follow. Gaya-gaya (replication) system,” explained Manggalis. He added that before the CPAR project, they buy their fingerlings from Pangasinan, but when BFAR provided the fingerlings through the CPAR project, they maintain their own hatchery and use that for their tilapia production. “I also sell to those who need fingerlings, one sack costs P2,000,” he said. Manggalis mentioned that most of his harvest is for family consumption. “It’s a good feeling knowing that when you want to eat tilapia, you can just get them without the need to buy from the market,” he said.

This project proves that tradition and new technology are never contradicting; in fact, they are complimentary bringing forth better chance of success both in production and profit. This was successfully exemplified by the Maeng Tribe when they adopted the intervention of the CPAR project.