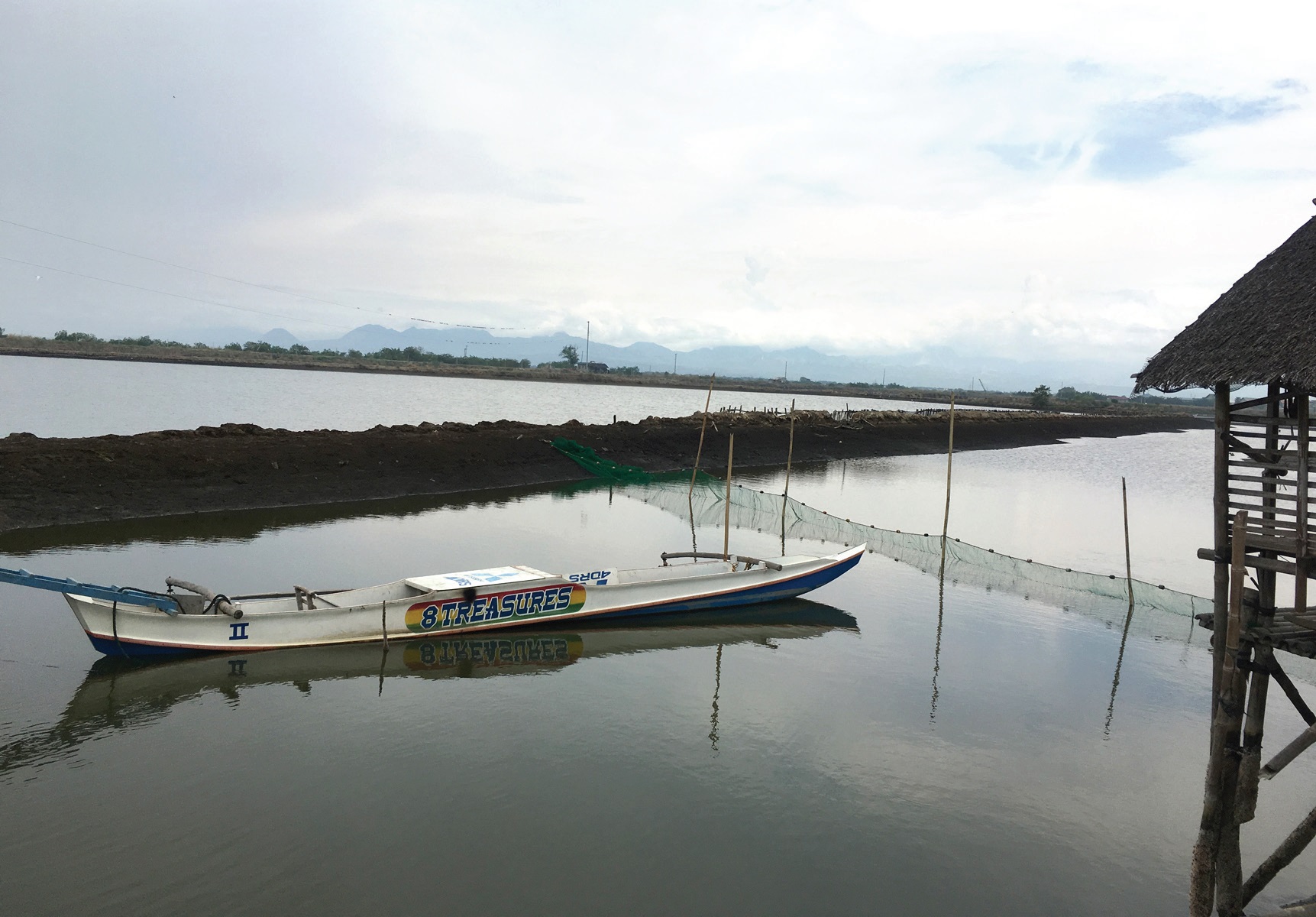 8 Treasures is a bangus (milkfish; Chanos chanos), alimasag (mangrove or mud crab; scylla serrata), and sugpo (tiger prawn; Penaeus monodon) farm located in Lubao, Pampanga. The area is comprised of fishponds that span different municipalities, some of which can only be reached by boat. The ponds are separated by dikes—strips of land where people can cross, some of which are equipped with wooden slats that, when piled on top of each oother, can be used to control how much water gets in and out of a pond.

The fishery started about seven years ago by Pepe and Pat Cruz in a different barangay. Pepe used to work in a private corporation while Pat was a housewife and real estate agent. Unfortunately, that first pond flooded every year, so they had to give it up.

The current ponds are run by their son Patrick, 36, who is Operations Manager, with Pat as Finance Officer. “Patrick and I… like the idea of growing seafood,” Pat said, adding that it was mother and son who convinced Pepe to give the business a try. “My husband didn’t want it at first. We had major disagreements before (he agreed).” 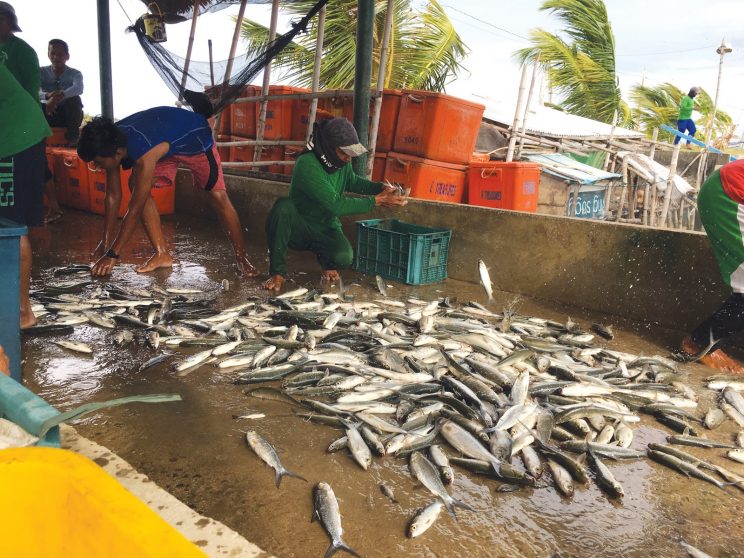 Workers sort the harvest and pack them into coolers, with one cooler holding approximately 35 kilos.

Patrick studied nursing, but graduated at a time when job prospects were drying up. “It was exactly when we acquired this,” he said.

The Cruzes have added 10 hectares (the average size of a pond) to their ponds every year, so what started out as 12 hectares is now 83.5 hectares spread across three barangays.

“The first thing for me is monitoring from day one to harvest,” Pat said.”Monitoring is important because you can track progress.”

Of the three, king prawns are the most sensitive, and there are times when the entire stock die for no reason. Like with any livestock, daily monitoring is important, especially after two months, when growth and progress can be seen with the naked eye and health and the fry can be held for inspection. Even then, the prawns are so sensitive that this is no guarantee of a big harvest.

Water quality, salinity (amount of salt contained per volume), and temperature are important. Prawns need a salinity level of 15-20% (within the range for brackish water), while the crabs can survive at higher levels. “The higher the salinity, the better, (but) 25% is preferred,” Pepe said. There are instruments for teting salinity, as well as other factors like pH, dissolved oxygen, and temperature. The ponds have to have a pH level of 6.5-7.5 and a temperature of 30 degrees Celcius.

There are many factors to consider in keeping fishponds at optimum levels of production. The most important—and the most unpredictable—is the weather. “Too much rain can bring down the pondwater’s salinity and affect growth,” Patrick explained. “And strong rains could damage the dikes.” 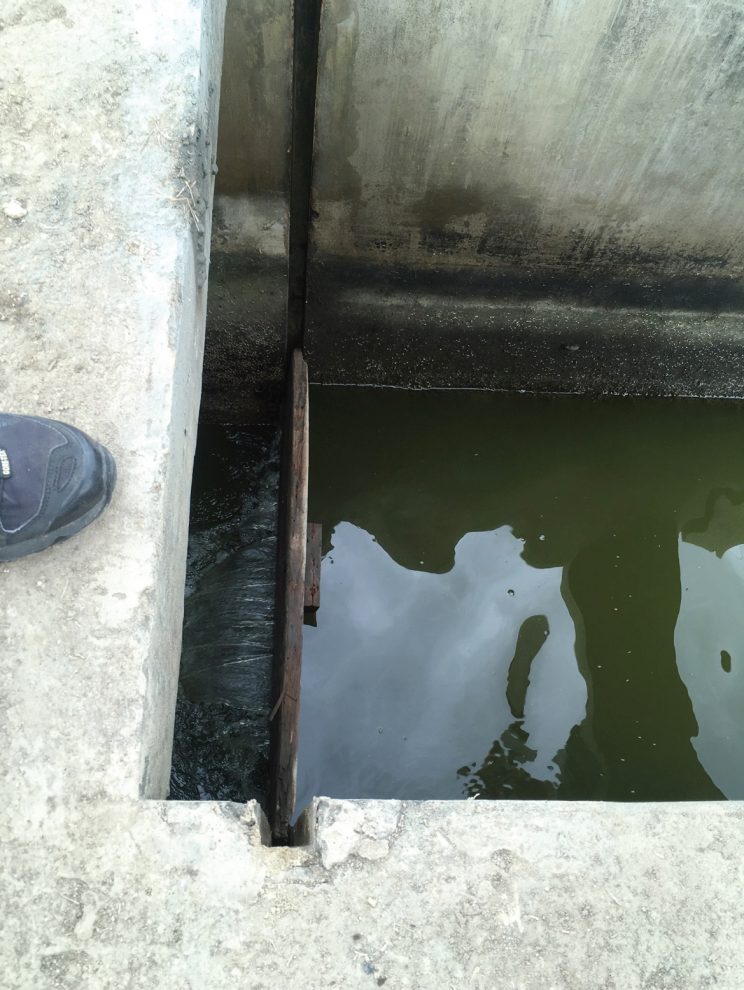 The dikes have wooden slats that can be piled on top of one another to control how much water gets out or stays in a pond.

Heavy rains can also raise the water level, allowing creatures from one pond to mix with other ponds nearby, a scenario everyone wants to avoid.

Not necessarily tied to the weather are water-borne diseases that can kill off entire harvests over many fishponds. Many of these have no cure, and the only way to rid the ponds of them is to change their water. “It can be arrested but there will be a lot of casualties, so you can’t expect a bumper harvest,” Pat said. “We don’t know exactly what causes it. There might be a virus in the water.”

“When this happens, it isn’t just one pond that’s affected, but everybody’s as well,” Patrick expounds. “Our theory is that the river water isn’t as clean as it used to be.”

The farm doesn’t use commerical feeds, preferring natural food composed of a mix of small shellfish called gasang or suso and trash fish, or other species of fish such as tilapia and gourami harvested in the pond and used exclusively to feed the bangus, crab, and prawns, locally known as jako.

The prawns and bangus can be harvested in about four months, while in Patrick’s experience, the crabs can be sold at any size, as fry, crablets, or grown to 4-5 month old.

Normally, the crabs are harvested first. Semi-conicular crab traps called bintol are laced with bait and left in the water. The woven traps have holes big enough for the fish and prawns to escape from, so only crabs are caught. The farm uses trash fish, which Patrick says is more effective than chicken innards, another favorite of fishpond operators. Next, the fishponds are drained and the bangus and prawns are netted. A group. of fishermen close a net around the bangus and the netted fish are passed on via a chain of fishermen from the pond to the shore. As the water level lowers, prawns can be plucked from the sides of the pond as well.

“We usually harvest twice a year—during May and December—but this year, we plan to add an August harvest as well,” Patrick said.

The sugpo are measured by weight, the biggest measuring about six inches and weighing 100 grams. The crabs are put in coolers and brought to Hagonoy, Bulacan, where they are sorted according to size and quality.

The total catch is measured by cooler, where the harvest is stored, with each cooler able to contain 35 kilos. The average harvest of prawns and bangus per 10 hectares is 30 coolers full, plus about 6,000 crabs. Prices fluctuate every day, with the prices of sugpo ranging from P500-1000 per kilo, P600-1500 per kilo for crabs, and P70-100 per kilo for bangus. The harvest is sold to a dealer who specializes in export. 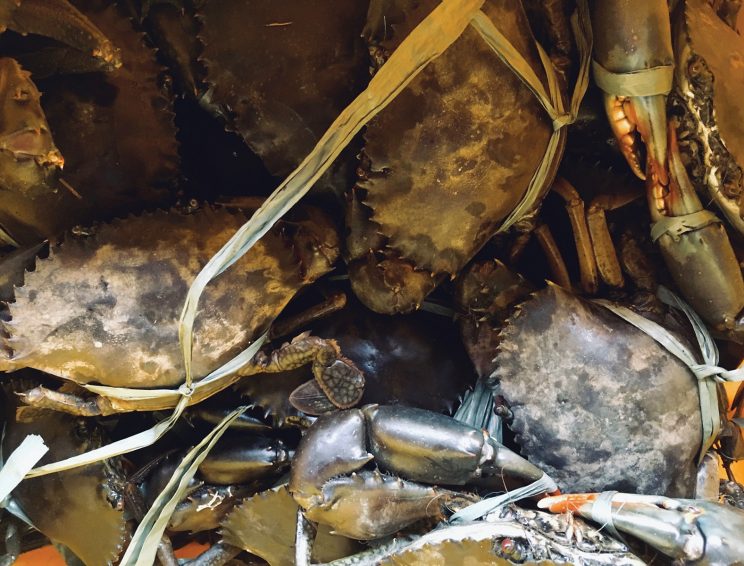 The price of alimango (mud or mangrove crab), as well as bangus (milkfish) and sugpo (tiger prawns) fluctuates daily, and may not be for the aquafarmer that’s faint of heart.

Patrick says that they used to bring their harvest to the fishport, but when they realized that everything was being brought to a dealer anyway, they decided to sell straight to the dealer. The bangus is brought to the fish market in Sasmoan, which is known for its fresh catch. The prawns used to be brought to the fishport in Orani, Bataan, though they have since switched to the one in Hagonoy. The crab is brought to Baclaran, where many exporters are located. “Bulacan and Parañaque are crab countries,” Patrick said. “You can find either an exporter or local disttributor in every corner. I used to personally go there to sell our crabs.”

As with all endeavors, running a fishpond has its own set of challenges. As mentioned above, the health and quality of the harvest depends largely on the quality of the water they live in, and that in turn depends on the water from the river.

Not all challenges are water-borne. On land, one must keep constant vigil against theft. Educating the caretakers, their families, and the residents of the nearby barangays on keeping the water and its surroundings clean is important as well. People have to be taught to keep the waterways clean to ensure a healthy harvest, as well as prevent diseases among its human residents.

But once those challenges are surmounted, the triumphs can be extraordinary. “A bumper harvest always makes everyone happy, not only us, but all fishpond operators,” Pat said. “Of course, it’s natural to want a bigger income because our helpers are dependent on that. They have a monthly salary and they also have a commission every harvest. The bigger the harvest, the higher (their earnings).”

Each fishpond has one regular caretaker whose main job is to monitor the pond and its contents daily. Their families live with them near the pond, and their kids walk or take a boat to school.

“There’s a satisfaction in knowing that you’re helping families,” Pepe said. “Not just our employees, but people in the barangay who help maintain the dikes, and so on.”
“Aside from giving people jobs, you also produce food,” Patrick added.

“You have to be interested in it, like Patrick is,” Pepe said. “It requires hard work, determination, and people management. You have to live and get along with the community. You really have to familiarize yourself with every detail of running a fishpond. It’s really a hands-on job.”

The cycle begins again after a harvest. The pond is drained and dried in the sun. Leftover catch is removed. Sometimes, the land has to be plowed. Probiotics and fertilizer (16-20 urea) is added to enrich the soil and sometimes, lime is added as well to kill unwanted bacteria and maintain the desired pH level.

“Pond preparation is important,” Patrick said. “After preparing the soil by drying, plowing, or liming, you have to make sure that the water you fill it with is clean.” 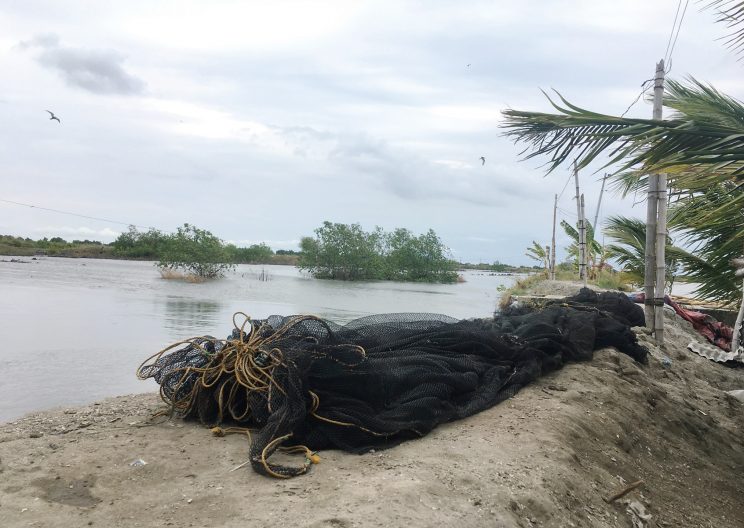 Nets are carefully dried and stored when not in use. This is part of pond maintenance.

Pepe says that before they begin the next cycle, they usually call a general meeting with the farmhands where they discuss their experiences with the last harvest—what they did right and what they can improve on—so they can learn from their mistakes.

Continuous training is also a must, as well as researching on ways to keep improving pond maintenance, water quality, and stock health and nutrition. “Innovation and openness are also important,” Patrick added. “Because the weather has been changing lately and because the river water isn’t as clean as it used to be, you have to find new and scientific ways to improve your harvest.”

But perhaps, most important is a love for and an interest in one’s job, as well as the ability to continually lead people forward as well. “It’s important that you don’t lose enthusiasm,” Pepe shared. ”Everyone is enthusiastic because everyone wants a big harvest. It’s also a matter of channeling your enthusiasm to the people who help you.”

At the end of the day, 8 Treasures is all about family—not just the Cruzes, but the community that surrounds the ponds as well. “8 Treasures is a family enterprise and I hope to pass it on to… my children’s children,” Pat said. “I don’t want to see it die just because we’re gone. I want it to go on because I love it.”

Rabbit industry may be a sustainable alternative for livestock production