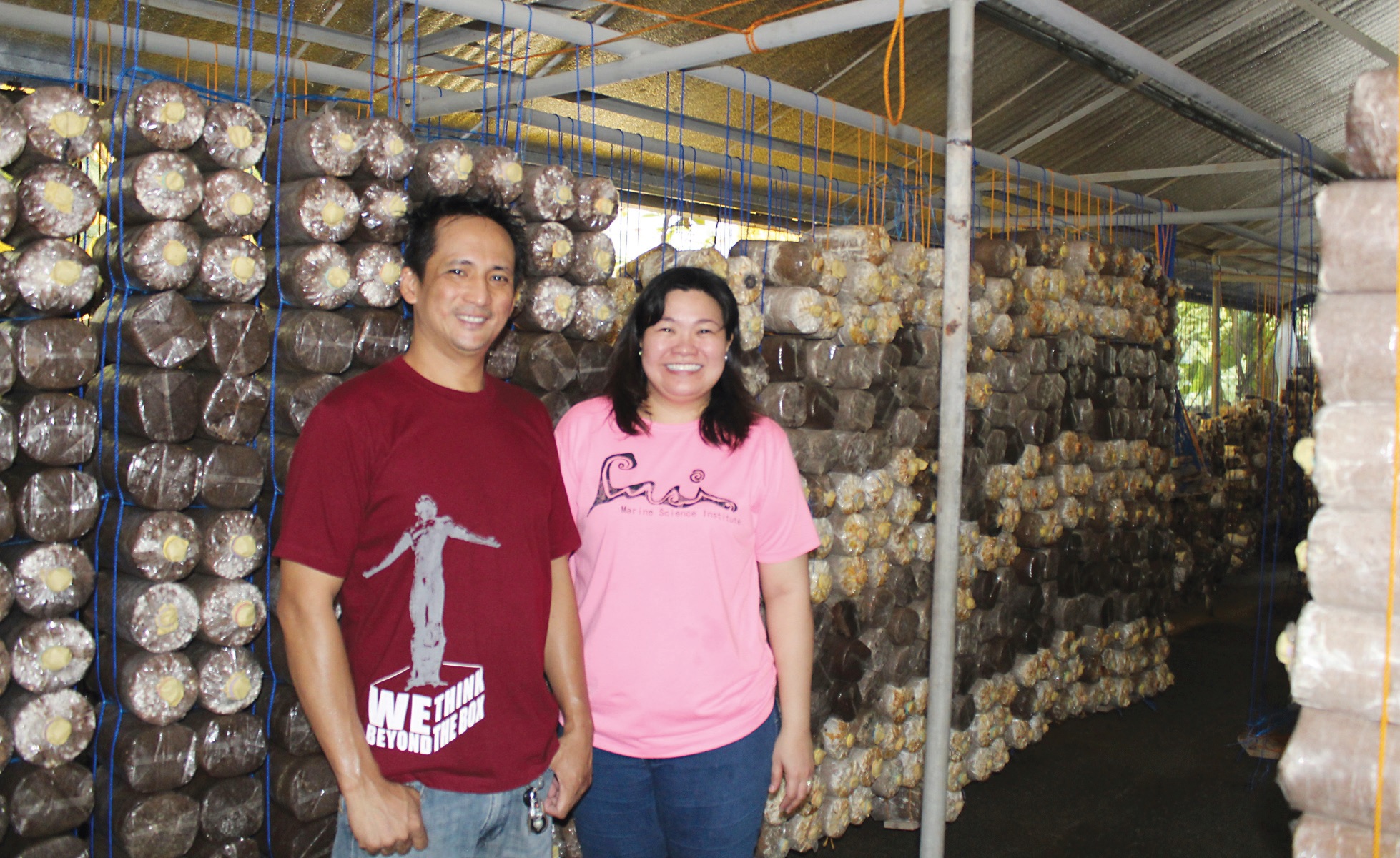 Most people already have an initial interest toward farming. Factors such as experience, environment, influence, and passion play a part in convincing people to grow their own food either for personal or monetary gain.

It was curiosity that led a couple, Kristine and Bennie Salanap, from Malolos, Bulacan to venture into mushroom farming. They initially thought that it would be visually appealing to grow.

They began to visit grocery stores to check the different kinds of mushroom that they could grow right in their own backyard. 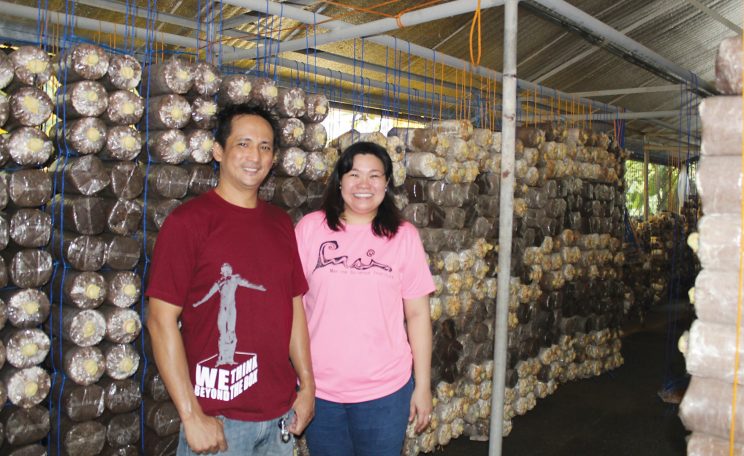 “We started to eat mushrooms but we realized that mostly they were only canned mushrooms, or if not, it’s not fresh anymore,” Kristine said.

The couple then decided that it might be a good idea to venture into mushroom production so they can both have and become the source for fresh mushrooms in the area.

Prior to their interest in mushroom farming, Kristine graduated from the University of the Philippines Diliman with a degree in BS Geology. She worked for over five years in the city before she decided to take a break in the province. In the meantime, Bennie used to work as a seaman, as well as a driver and operator for a transport service.

“Bennie was the one who was really curious on how to grow mushrooms, so he researched online on how to start a mushroom farm; he watched videos and read posts related to it,” Kristine said.

Kristine also said that they didn’t attend any seminars prior to their establishment of a mushroom farm. It was purely their own initiative and interest that drove them to delve into the business.

Oyster mushrooms as their main crop

When they first began growing mushrooms in their backyard, the couple experimented with different varieties such as the milky mushroom and the oyster mushroom to see if they could grow both types or if they should stick to only one.

“We even tried growing Shiitake mushrooms and the Black Treasure mushroom which is locally known as tengang daga,” Kristine said.

After some trial and error, they decided to grow only oyster mushrooms because for them, it’s an easy-to-grow variety that’s available all year-round. 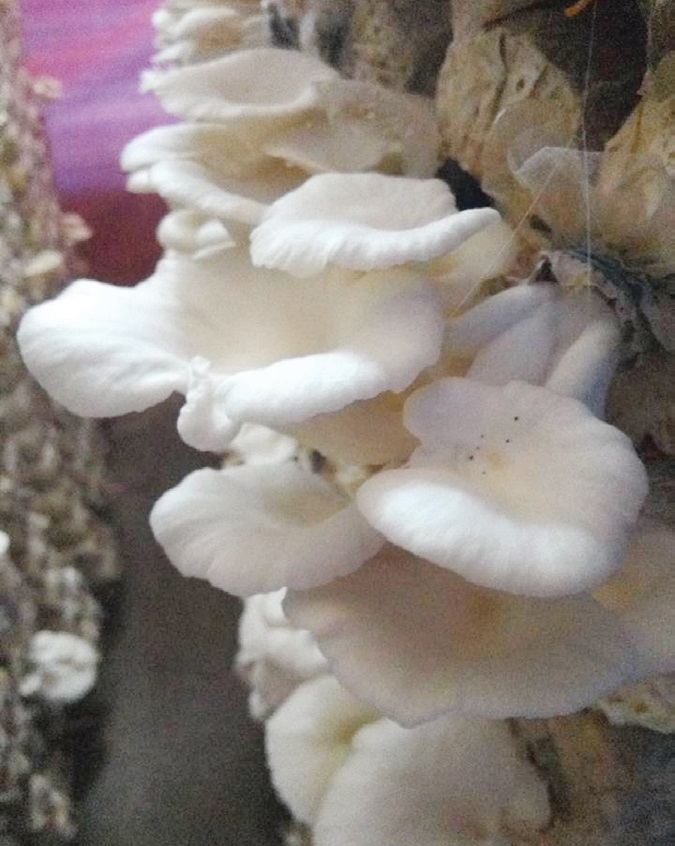 The couple chose to grow oyster mushrooms because it can be harvested all year-round.

Oyster mushrooms are quick to grow, relatively resistant to their competitor organisms, and can grow on a wide range of surface materials like soil, straw, and others. However, it still needs to be taken care of properly in order to grow abundantly.

“It’s like taking care of a child,” Kristine said. “You have to give it enough time and space to grow while constantly looking after it so no harm will come its way.”

According to Bennie, the mushroom house (the space where all the mushrooms are grown) is to be kept sterile at all times to avoid any contaminants that may affect the mushrooms as they grow. Moreover, the environment where the mushrooms grow should be at the right temperature to avoid waterlogging, which is when plants have too much water in the roots, or drying out.

“We have to maintain a certain level of humidity. It shouldn’t be too hot or too cold; that’s why we apply different measures when harsh weather begins,” Bennie said.

In order to maintain a temperate environment, the couple constructed a mushroom house – a shed on their own backyard so they could control growing conditions.

“During dry seasons, we keep the shed moist by watering it around three times a day or whenever the atmosphere of the shed and the fruiting bags are starting to feel dry,” Bennie said.

On the other hand, when the rainy season comes in, Bennie puts up mesh nets or tarpaulins around the shed to avoid any excess rainwater from entering the shed and soaking the fruit bags where the mushrooms grow.

Working together as a couple

Kristine admitted that running a business as a couple isn’t always an easy thing to do. They’ve had several disagreements on how to manage things but fortunately for them, they always manage to reach a compromise.

“Many people think that starting a business together as husband and wife would lead to many problems because there’s a thin line between personal and professional lives. But the thing is, running a business is also like handling a marriage. You just have to be patient and understanding, as well as smart enough to [recognize each other’s strengths and where they could effectively fit in],” Kristine said.

In order to avoid arguments, the couple do different tasks so they can both keep a close watch on their business without troubling each other.

Bennie is in charge of the mushroom production, while Kristine takes charge in the value-adding and marketing part.

Although the couple have their own designations in the business, both are familiar with the other’s work to make sure that they can run the business independently even when the other isn’t around.

Aside from selling fresh oyster mushrooms, the couple also practices value-adding so they can make the most out of their harvest. 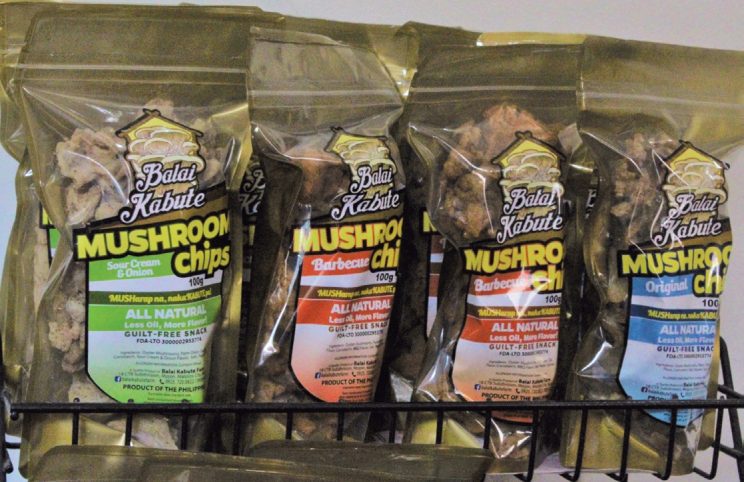 The different flavors of mushroom chips include original, sour cream, salted egg, and barbecue; they are the farm’s best-selling products. (RLDJ)

Balai Kabute Farm sells mushroom chips that are made out of the caps, and mushroom bits made from the stems. Kristine deep fries the oyster mushrooms, which come in different flavors that customers can choose from.

“Mushrooms are a good source of many nutrients and they’re healthy to snack on. So we thought, why not get that habit out of healthy snacking?” Kristine said.

She also said that she added different flavors like sour cream, barbecue, and more, to appeal to the different taste preferences of the consumers.

Apart from their edibles, Balai Kabute Farm also makes a mushroom seasoning made from the dried parts of the mushrooms so it won’t go to waste.

“Since there are a lot of seasonings out there that aren’t organic, we want to promote healthy eating through this alternative mix. It’s made from dried mushrooms so it’s nutritious and has less amounts of MSG (monosodium glutamate),” Kristine said.

Balai Kabute Farm’s products are available for sale at the pasalubong centers in Bulacan.

The amazing revival in the cultivation of tropical fruit trees