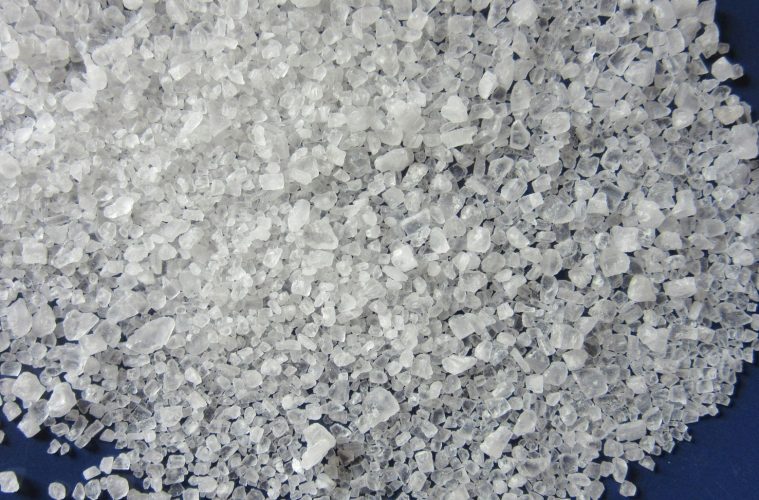 Salt is an important part of cuisine. It adds flavor to dishes, provides trace amounts of minerals, and if you believe in such things, can keep away certain supernatural beings.

At one point, salt farming was a thriving industry in the Philippines. The country was almost, if not 100% self-sufficient when it came to salt. All this changed in 1995, when, under the recommendation of the World Health Organization (WHO), Republic Act No. 8172, or the Act for Salt Iodization Nationwide (ASIN), was passed. The law required that all food-grade salt sold in the Philippines be iodized. According to the Law, “This Act shall apply to the entire salt industry, including salt producers/manufacturers, importers, traders, and distributors as well as government and non-government agencies involved in salt iodization activities.”

The law meant well. People of a certain age will remember the iodized salt commercials sponsored by the Department of Health (DoH) that promoted the importance of iodized salt in one’s diet. There was a high incidence of iodine deficiency at that time, and the easiest way to combat it was through salt iodization. While it didn’t eradicate iodine deficiency in the country, the Law did lower it considerably.

An industry almost wiped out

Unfortunately, it became illegal to sell non-iodized salt. A lot of farmers were unintentionally affected as, without the facilities to iodize their salt, their means of livelihood suddenly became illegal.

According to Kabayan Representative Congressman Ron Salo, who is hoping to make an exemption in the ASIN Law, “…We were basically 100% self-sufficient with respect to salt before the passage of the law. Then later on, we started importing [salt] because our farmers were not able to comply with the iodization requirement. Now I understand that almost 80% [of the country’s salt] is now being imported. [That’s] 20% self-sufficiency.”

Which begs the question, what happened to the 80% of salt farmers? “There is this big group of farmers whose livelihoods used to depend on salt farming and now they’re completely without employment. Yes, it’s true that we were able to address the iodine deficiency in the majority of the population, but there is a sector that was greatly affected by this particular law,” Salo says.

Many salt farmers were forced to give up their livelihood because they couldn’t comply with what the law required-either they didn’t have the training, the funds, or the resources to iodize the salt they farmed. And since what they were producing became illegal, “They will be criminalized, they will be caught by the police. So they end up not doing it anymore,” Salo says.

The ASIN Law was heavily enforced at first. “There was a point when the… iodine [incidence] deficiency incidence was high, the Philippine National Police (PNP) was tasked by the DoH and the Department of Foreign Affairs (DFA) to really go against these so-called traders ‘cause they’re doing something that’s illegal,” Salo says, adding that the only reason nobody hears of salt raids nowadays is because the Law hasn’t been strictly enforced. “They’re able to sell it now simply because the police are not trying to catch them, but there’s always that fear [that] in order just for these people to make their livelihood, they’re always at risk of getting apprehended and incarcerated.”

There were no systems in place to protect the farmers affected. “There should have been a massive training of our farmers as well as the support mechanisms including the resources that they will need,” Salo says.

And since salt farming techniques, as well as the salt produced, differed from place to place, not only did many farmers lose their livelihoods, but the Philippines lost a big part of its culture as well.

Sea salt as both basic and prime commodity

There is more to salt than just saltiness. Sea salt is prized among gourmands depending on where it is from and how it is farmed. Many people feel that the ASIN Law means that the Philippines is missing out on this potential export market. Salo cites an example: “In high-end restaurants in New York and even in other parts of the world, they would require… non-iodized sea salt because it’s considered a gourmet product and it’s really one of the choices of the chef, but in the Philippines, you wouldn’t have any access to that.”

Lennie DiCarlo, a Filipino American chef and the proprietor of xroads Philippine Sea Salts, a US-based business that distributes small batch sea salts from Pangasinan and Bohol, agrees. “It’s a matter of choice. I’m sure there’s a lot of people who would rather not have iodine in their salt,” she says. “As a chef… iodine is bitter… If you put iodized salt on your tongue–salt is one of your taste glands–you will taste the bitterness of the salt. That’s why chefs don’t really like to use iodized salt. They prefer to use sea salt or natural sea salt.”

DiCarlo works with heritage sea salt manufacturers and traders who have the proper papers, but the people she works with are just some of the lucky few. Apart from taste, it’s the story of the sea salt farming and sometimes traditional, small batch production methods that entices people to support the industry. For a majority of salt farmers, opportunities like this are rare or nonexistent. “One of the things they’ve been telling us is perhaps they should try selling it abroad but requirements for a person to be able to sell abroad is that you’re able to sell it domestically,” Salo says.

Aside from the loss from potential domestic household consumption and export opportunities, there is also the loss of revenue from local restaurants and businesses that use rock salt in their recipes and products. “From the point of view of some food manufacturers, it actually destroys the taste,” Salo says.

The need for choice

What Cong. Salo and other advocates of the amendment of the ASIN Law is that consumers be given a choice. “It’s true that Universal Salt Iodization is the most effective method, but it actually transfers the burden on the private sector,” he says. “Addressing it now becomes the burden of the private sector… the government is requiring the private sector to undertake a method to protect the… rest of the population.”

He says that while people need iodine in their bodies, not everyone needs to get it from salt. “There are other people who [don’t] need so much iodine in their salt [because] they are getting it from other sources,” he adds.

DiCarlo agrees. “[We don’t want to] change the Asin Law because iodized salt is still important for communities… who don’t obtain iodized products. For instance, high up the mountains, it’s so rural that they don’t have the ability to obtain [iodine from outside iodized salt] yet. Yes, it is still important however, [to give people] an option. People should always have the choice to decide what they want to eat, what they want to put in their bodies.”

Folks who support the amendment of the ASIN Law also say that the Law not just limits the choice of the consumer, but limits the livelihood of a once thriving traditional industry as well. “..Perhaps the government should take a different approach by ensuring that each of us is capacitated enough to make the right decision,” Salo says. “…if we know for a fact that we lack that iodine, we should be given [the] choice [to] purchase iodized salt… I should also be given a choice to purchase a non-iodized. But in the scheme of things now, there’s no option given to the consumers.”

He acknowledges that not every consumer will know whether they are iodine deficient or not, which is why he also suggests the need to empower citizens to make the right choice for themselves by providing them with sufficient and accurate information. “[Tell] them that this is exactly what you need in your body and these are the ones available in the market and make your choice,” he says. “All we need is to inform people that we need iodine in our bodies and [you don’t need to necessarily get it] from salt.”

The hope is that an exemption can be made to the law so that iodization be made optional, “to be able to give opportunity to our salt farmers to continue in [their] source of livelihood,” Salo states.

The exemption aims to address three main groups: sea salt farmers that have lost their livelihood, industries that require sea salt in their recipes and products, and consumers who want to be able to choose between iodized and sea salt. An unintentional beneficiary of this measure would be local cultures that revolve around salt farming.

The Congressman has proposed a measure to exempt Filipino sea salt from mandatory iodization. What can the regular Filipino do when it comes to changing a law? “We need support, in particular, from the public,” Salo says. “It was not prioritized in the 17th Congress because of more pressing measures. I hope in the 18th Congress, it will be prioritized.”

Advocates are also hoping for support from the Senate. Salt may be a small thing, a condiment that’s often taken for granted. What many people don’t realize is that it’s not just farmers, but part of Filipino culture that relies on the livelihood of salt farming as well.