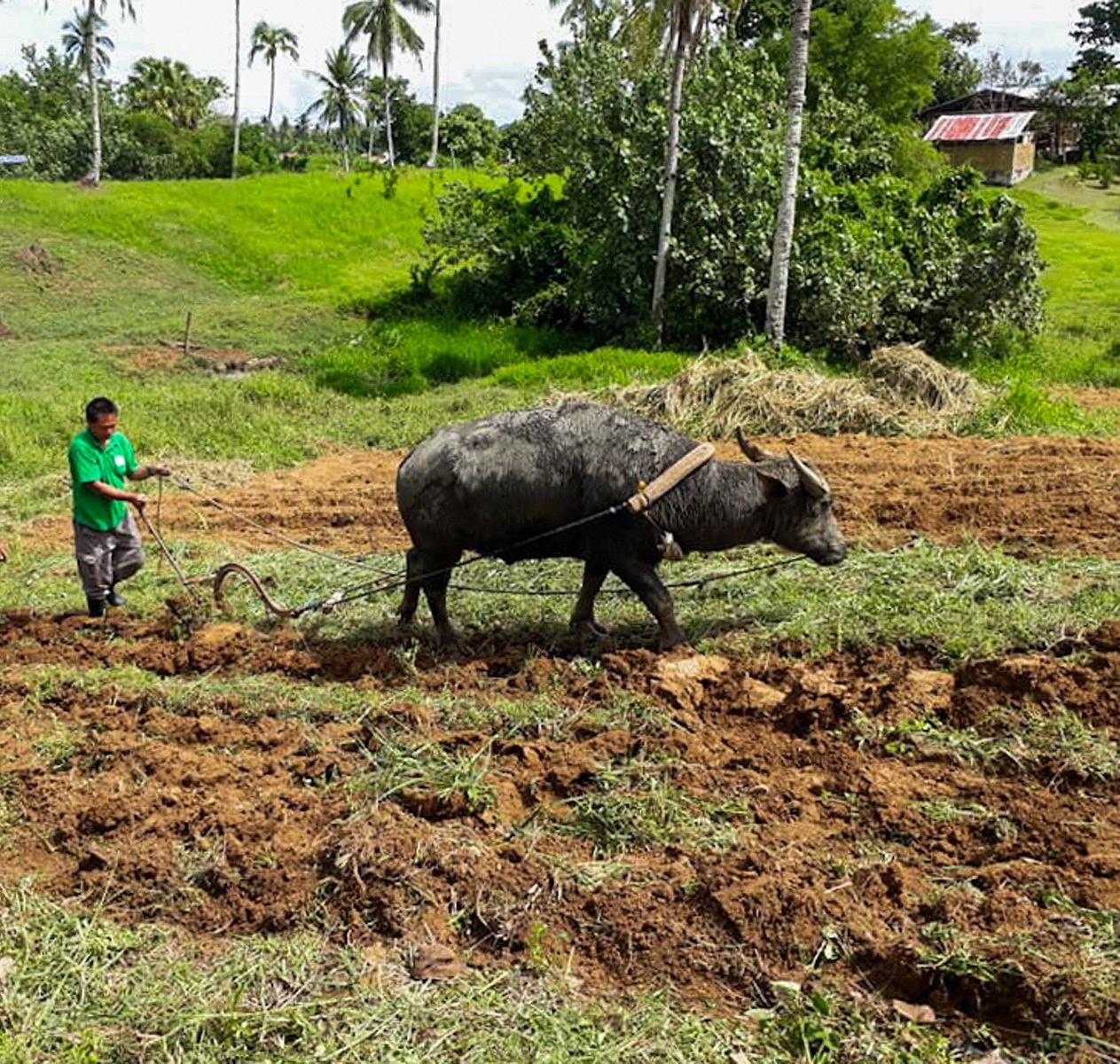 If you happen to visit Tacloban City, then La Granja de Reyna must be on your itinerary. It is one of the most visited farms in Tacloban City due to its organic-integrated farm certification, a recognition given to a single farm for producing a variety of crops, livestock, and poultry which are all cultivated in the natural, or organic way.

The farm takes its name from the Spanish word la granja which means “the farm,” and Reyna, from the surname of the family who owns it.

Martina Reyna, an agricultural engineer from the University of Eastern Philippines is the owner of this certified organic-integrated farm. She is also a third-party certified organic farmer.

View of La Ganja de Reyna farm atop a hill.

She started planting vegetables when she married her husband Antonio and realized that her in-laws consumed a lot of meat products. Concerned with her in-law’s health, she decided to plant her own crops and grow them naturally for the consumption of her husband’s parents.

From coconut to vegetables

Before her natural farm was established, she had been operating a coconut and rice farm in Tacloban. In 1998, due to the high supply and low demand for coconuts, the price of copra drastically went down. The farm she intentionally built for her family served as a wakeup call that maybe a natural farm was the business she had been searching for as an alternative source of income for the family.

It was in 2010 when she started planting various crops in an unoccupied land owned by her husband. The original area of the property was 15.8 hectares when it was bought by her husband’s parents in 1935. Years passed, and when neighboring owners started to sell their lands, the Reyna family’s ownership expanded to 51 hectares.

As an agricultural engineer, she was able to plant legumes (Fabaceae), lettuce (Lactuca sativa), kangkong (Ipomoea aquatica), cabbage (Brassica oleracea), mustard (Brassicaceae), and many more for the start-up.

After almost three years, her natural farm was booming, but then super typhoon Yolanda (Haiyan) happened. Tacloban City was devastated, and La Granja de Reyna was not spared. 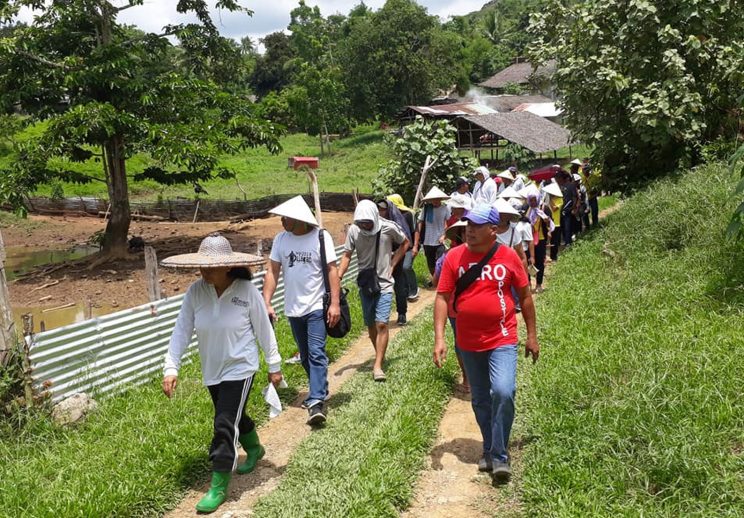 According to Reyna, it was a miracle that they were able to survive because the flood reached the top of their roof. They were rescued by some of her friends, who brought them into an elevated place.

When the water subsided, the Reyna family were shocked to find that their car was stuck on top of their roof. Reyna and her family were saddened about what happened to their properties, as well as to the farm, but they were able to accept the tragic event because survival is the most important thing for them.

The day after the typhoon, some foreign visitors arrived searching for a place to stay. In good faith, Reyna offered them one of her rooms which was not affected by the typhoon. The visitors were representatives of National Geographic magazine whose goal was to document the impact of typhoon Yolanda on the people of Tacloban.

Due to Reyna’s kindness, her foreign visitors gave thanks by endorsing her to some of their partner non-government organizations (NGOs) who were helping with the rehabilitation of Tacloban after the typhoon such as Helping Hands, All Hands and Hearts, and many more. These organizations helped Reyna rehabilitate her farm.

Reyna is thankful that there are people who were willing to help her. However, she could not set aside the thoughts of having cultural differences with her benefactors and its possible impact on their connections, especially since they were planning to extend help to the people of Tacloban, who were still trying to survive after the typhoon during that time.

“I am very thankful, but I’d like to give you precautionary [measures] because perhaps your [agricultural] practices in your area are much different from here in our area,” Reyna explained to the foreign visitors. “You have to know the values of our farmers, you have to know the cultural practices of our farmers, and it is not as easy as just giving them materials to plant,” she added.

Since Typhoon Yolanda brought a lot of damage to the area, everyone in Tacloban City suffered from hunger. Even the rich could not buy anything to eat because food supplies were all washed out by the Typhoon.

Reyna remembered those that were greatly affected by the typhoon – some people were left with nothing but themselves, while others wondered if they would see their missing loved ones again. There were also those who resorted to looting in order to have food, and there were those who were left in the streets to die because of hunger.

Reyna realized that she was fortunate to still have her family with her after the devastating typhoon. This was where she got the courage to help her countrymen. Reyna, with the help of her foreign partner organizations, was able to rehabilitate a portion of her farm, which they dedicated to planting crops that could assist the needs of the people of Tacloban City.

She decided to plant kangkong, which is an easy-to-grow plant and only takes about one to two months to harvest after planting. Cutting the stem two inches above the soil line will allow the plant to eventually grow new stems which can be harvested after four to six weeks. In a short period of time, she was able to harvest her crops.

She donated the harvest to the victims of the typhoon by putting up banners saying that she was giving away kangkong for free. A lot of people went to her farm, desperate to have even just a little kangkong to feed themselves and their families. Since then, she was hailed the “Kangkong Queen” of Tacloban City.

Years after the devastating impact of super typhoon Yolanda, La Granja de Reyna once again blooms. Other variety of crops are now growing in it, like cherry tomatoes (Lycopersicon esculentum) which sells for about P350 per kilo, sweet potatoes (Ipomoea batatas) that go for about P50 per kilo, lettuce (Lactuta Sativa L.) at about P200 per kilo, and other fruits and vegetables whose prices depend on the current demand. There is an additional fee of P35 if guests want to personally pick their own vegetables and fruits.

The farm operates not just as a source of crop and livestock supplies, but also offers various programs to farmers around the country such as training, seminars, and demonstration projects led by Engr. Reyna. She conducts lectures on how to sustain organic farms and demonstrations on how to produce organic concoctions. The farm also serves as a must-see for tourists who visit Tacloban City.

Last December, the farm experienced another devastating event when typhoon Ursula hit the city of Tacloban. Today, Reyna is rehabilitating the farm once again, but the difference is that she’s doing it all with her personal team and without assistance from foreign organizations.

“Initially, we really cleaned everything. We kept all the debris because we are into organic practices. We have to practice crop rotation,” she explained. “We divided the farm for crop production [into] five different areas. Whatever we plant in Area 1 must be planted [in] other areas as well,” Engr. Reyna added. In addition, leaving the area in a devastating situation will prolong the impact of the typhoon, which may extensively poison the soil.

“My training area… [has] already [been] transferred [to] a safer place which is not as open as [where it used to be, which was] facing the sea.” Engr. Reyna stated. She revealed that her training facility has now been transferred behind a hill surrounded by trees. The hill and the trees will protect the area, which will reduce the impact of any upcoming typhoons.

Engr. Reyna has already started planting in some areas of her farm. She is confident that it won’t take long before La Granja de Reyna return to its former glory. She is also certain that this rehabilitation process will bring about a new, improved version of her farm and it will continue to stand strong against future calamities that may come along the way.

A package of interventions to develop a poor town in Lanao