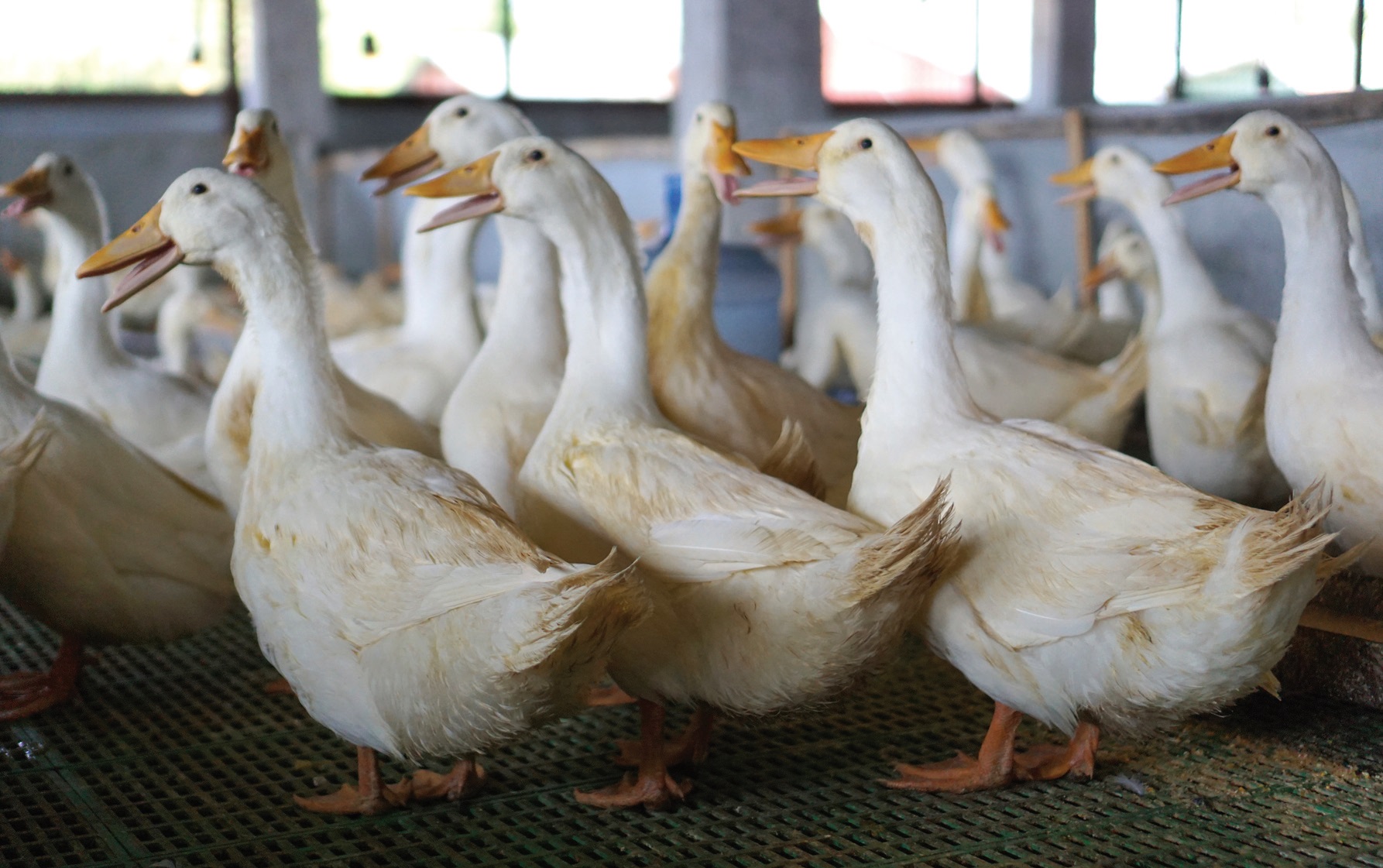 “We don’t practice force-feeding where we insert meter-long tubes in our ducks just to get a desired weight or physical appearance. We even give them a clean and spacious living area so they will be stress-free from birth to slaughter,” Guillermo said.

He added that this approach keeps their meat products fresh and tender because the ducks are well-raised and treated gently. 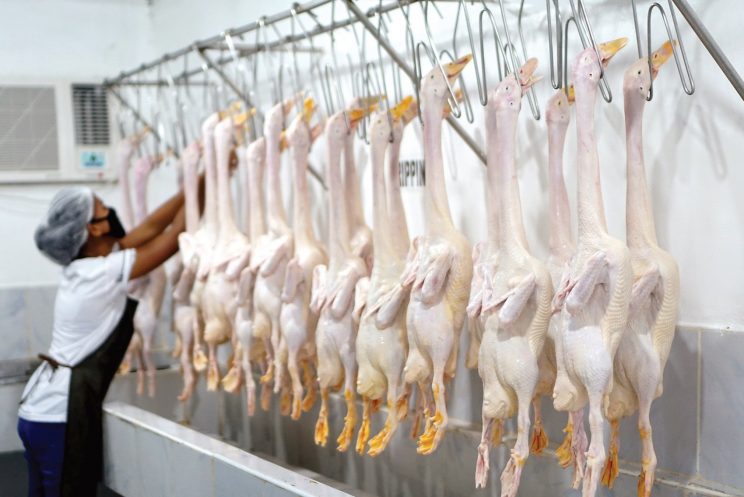 The ducks are washed before processing and packaging. (Photo courtesy of Myles Guillermo)

EJG Mighty Duck Farm, located in Victoria, Laguna, is considered the Pekin duck authority in the Philippines since it produces and markets natural and premium duck meat and other products for consumption.

Guillermo also said that a key to producing quality livestock is by giving them the best, yet safest inputs such as vitamins, feeds, and water.

“A lot of farms practice cost-cutting, but we choose to do otherwise. Our belief is that our ducks will turn out excellent if we also provide them with natural, yet high-grade, as well as hormone and chemical-free input,” Guillermo said.

The farm creates their own grain-based feed, which is carefully mixed with a desirable amount of vitamins and minerals to help in the ducks’ growth and production.

The farm was initially established by Guillermo’s father, Mario, as a native duck egg farm as his retirement project back in 1993. It was named after his wife Estrela J. Guillermo, and Mighty Ducks, the favorite movie of his three kids who played ice hockey for the Philippine Junior Team.

Acclimatizing to create a local breed

Pekin ducks are a domesticated duck breed primarily used for meat and egg production. It was said to have originated and bred from the mallard in China, then later brought to the West in 1873.

In 2004, Mario saw the lack of a local pekin duck farm in the country. He then shifted his hobby farm into a full-scale agro-industrial Pekin duck farm and imported breeds from England, Germany, and Taiwan.

“When the ducks first got here, many of them died because they weren’t used to the climate. Thankfully, we managed to acclimatize a good number until we have groups with zero mortality because of the climate,” Guillermo added.

Currently, the Mighty Duck Farm houses the ninth generation of Pekin ducks that have descended from the original batch imported from overseas.

Usually, there are about 8,000 eggs laid per week on the farm, which are either sold as salted eggs, salted egg yolks, century eggs, and more. 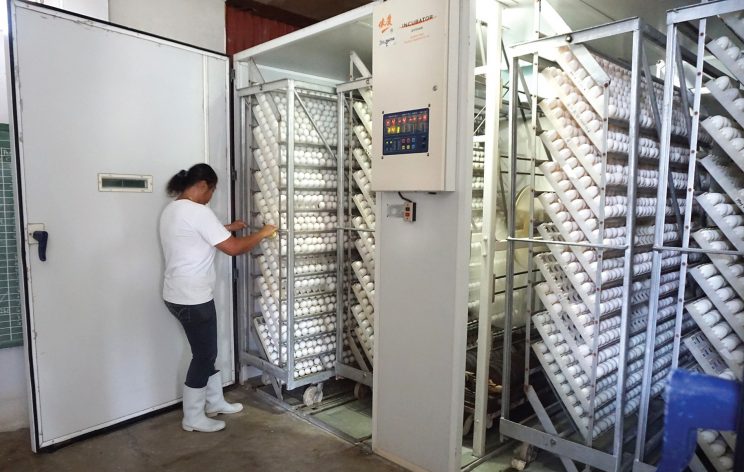 In the meantime, around 1,200 to 1,500 eggs are placed inside the farm’s incubator to serve as the next batch of ducks that will be raised for meat and egg production.

“We only hatch a certain amount of eggs to avoid [overcrowding of] ducks here on the farm,” Guillermo said.

Pekin ducks have a rapid growth rate; it only takes three months to develop a fully-grown duck fit for production.

Caring for the people

Guillermo shared that the success of the farm wouldn’t have been possible without the unconditional support from its employees.

A few years after the farm began production, it suffered terrible losses brought about by tropical storms Ondoy and Peping in 2009. It was around this year when the younger Guillermo entered the business and saw the damage on the farm.

“The farm was in shambles – there was only one duck house standing and most of the ducks died because of the flash floods. We were making negative nine numbers so my father advised my siblings and I to leave the farm, shut it down,” Guillermo said.

Despite his father’s advice, Guillermo went ahead and continued operations on the farm, but he wasn’t alone in doing so.

“I’m grateful to the employees who stood by me in the toughest of times. For a time, they even agreed to work without wages,” Guillermo said. 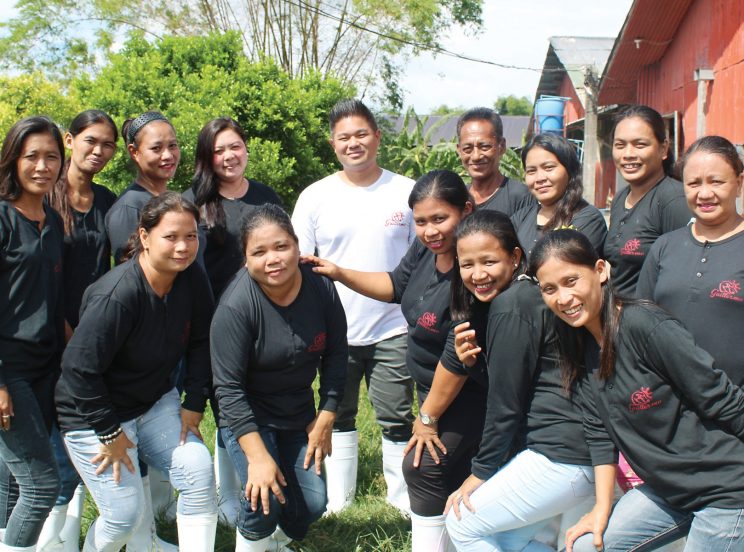 Myles Guillermo (center) together with the employees of EJG Mighty Duck Farm, Inc.

He added that he kept the farm open to be able to provide a livelihood to the residents of Barangay Pagalangan in Victoria, Laguna.

When they managed to restore and develop the farm, one of Guillermo’s main goals was to be able to provide good benefits and proper wages to the employees who put the farm’s interest at heart.

Guillermo said that the term “family farm” transcends its meaning when it talks about EJG Mighty Ducks Farm because apart from being established and managed by the Guillermo family, the experiences on the farm created a bond among its employees where they treat each other as members of their own family.

Looking out for the environment

Aside from acquiring all the certifications and permits required to run a duck farm according to the standards of different organizations, either private or government-related, and making their own duck feed, EJG Mighty Duck Farm also took several steps in becoming sustainable.

Since the farm is located near the banks of Laguna Lake (or Laguna de Bay), it also complies with the standards set by the Laguna Lake Development Authority (LLDA).

“We make sure we comply with all the legal requirements of LLDA. We have our own waste processing facility so we don’t excrete harmful emissions from this farm,” Guillermo said.

The LLDA is an agency organized through Republic Act No. 4850 and then given environmental protection as well as jurisdiction over Laguna Lake through Presidential Decree 813 in 1975 and Executive Order 927 in 1983.

This provides a safe environment for the residents near the duck farm while creating a sustainable setup for the farm which Guillermo considers as the company’s goal while making premium meat.

“It’s not just about the environment and the community. Sustainability is the secret behind keeping a business alive, which is why we acclimatize our ducks so we won’t have to keep importing and risk getting diseases that are widespread in other countries,” Guillermo said. (Photos by Nikky F. Necessario)