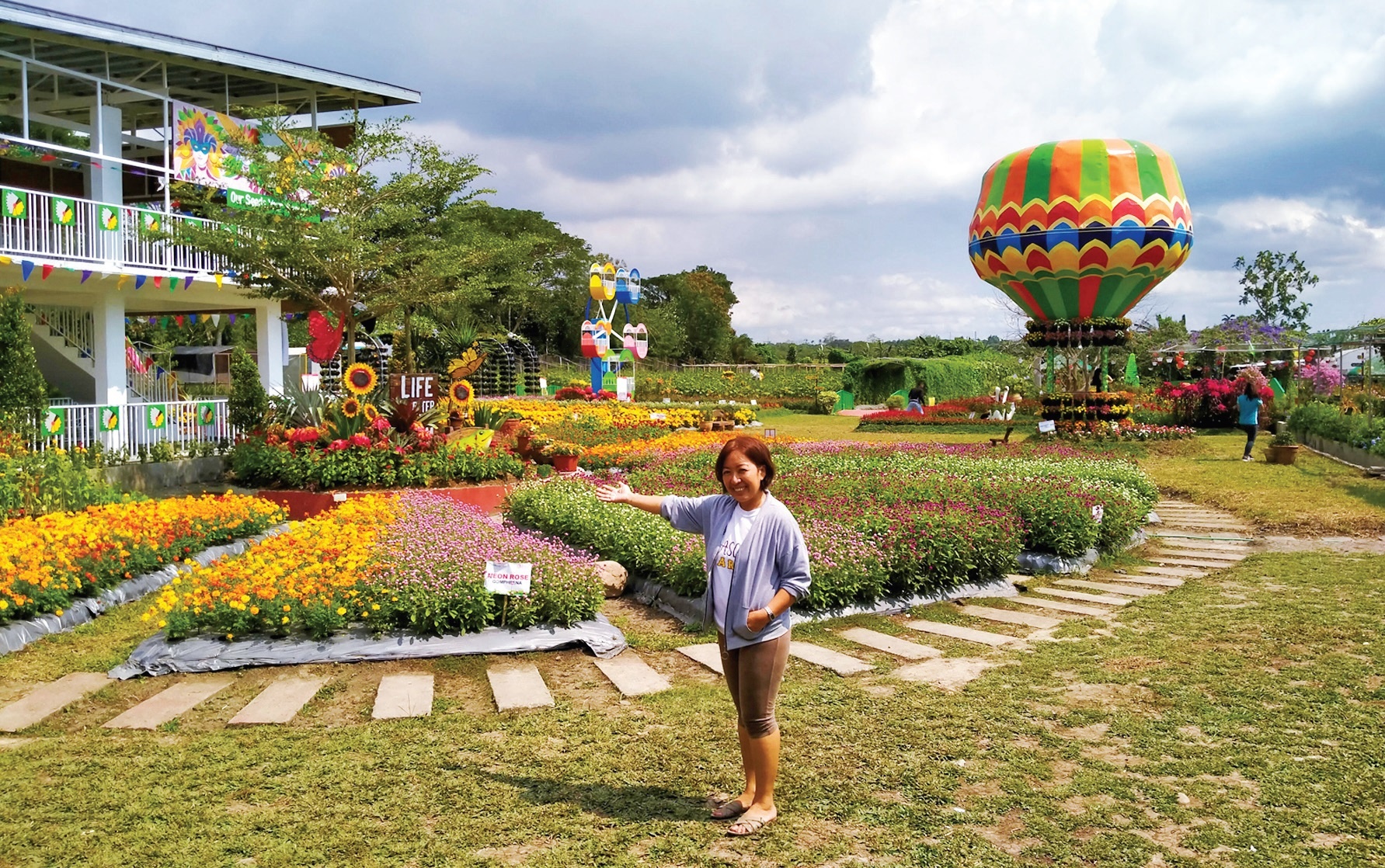 What used to be a wasteland where no crop would grow for many years is now a one-hectare flower farm that is attracting local and foreign visitors. This is the Girasoles Farm, put up in 2017 by Ma. Vivian Cornejo-Dean, 46, along the Diversion Road in Candelaria, Quezon.

Her father used to grow rice on the property, but when the neighboring piggery dumped its wastes onto the farm, not a single crop would grow. The piggery had long gone and her father had also passed away. And so for many years, the land was left untouched and neglected.

Dean, who has been growing and selling ornamental plants and has also been in landscaping for about 15 years, decided to do something about the land after attending the Sunflower Maze at the research farm of Allied Botanical in Tayug, Pangasinan in 2017. She was so inspired by the large flowers of the sunflower that she decided to transform the wasteland that she inherited from her parents into a sunflower farm. She called her farm Girasoles Farm. Why Girasoles? Well, Girasoles is sunflower in Italian. 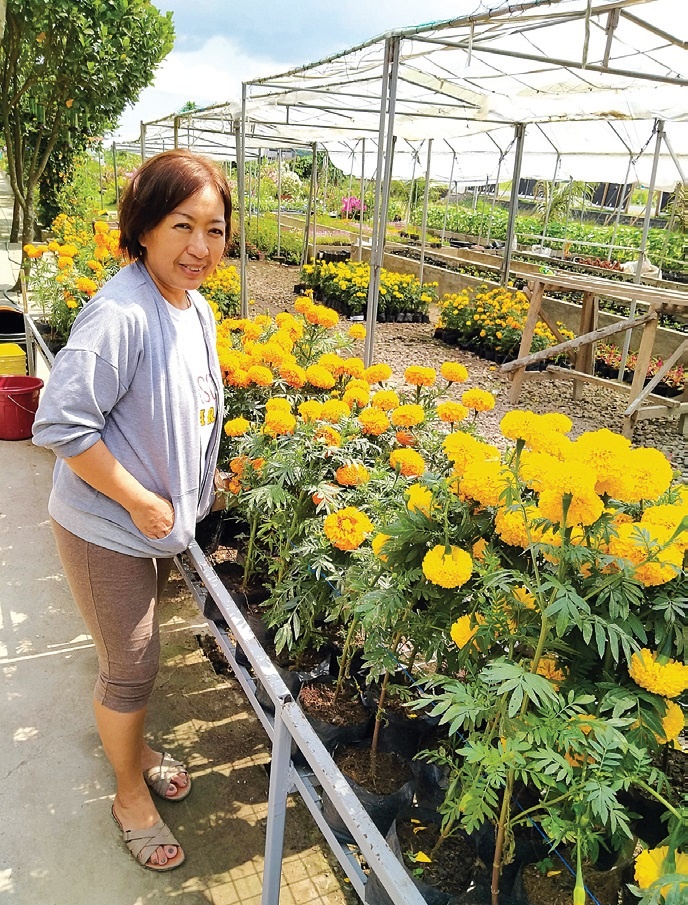 Dean poses with floriferous marigold that is well adapted to hot lowland conditions.

The idea started out fine. She was able to grow sunflowers with large flowers. Many students, teenagers, as well as adults became curious and took selfies of themselves among the flowers. But growing only one kind of flower may not sustain the interest of visitors. They would like to see other varieties that are as spectacular.

This year, 2020, something big happened on Girasoles Farm. Instead of Allied staging its own Flower Festival in its research farm in Pangasinan as it used to do, it decided to collaborate with Dean so that they could hold the Flower Festival on her farm. Sakata Seed of Japan, which supplies the flower seeds, also lent its helping hand, according to Dean. Here, they are showing that many other flower varieties from Japan will grow well under lowland conditions.

On January 25, 2020, the Flower Festival, which will run through May 31 this year, was launched. The launch was a success. That weekend, more than 3,000 visitors attended, paying an entrance fee of R100 each. During ordinary days, 400 to 500 visit the flower farm, according to Vivian.

Aside from Allied and Sakata Seeds, Gov. Dante Suarez of Quezon is also very supportive. He will include Girasoles Farm in the tourism program of the province. The farm is also a place where many processed products from different towns of the province are showcased like processed sweets, coffee, herbal products, gourmet tinapa, natural beauty products, and more.

A vegetable section at the end of the farm has been added so that visitors can also enjoy buying fresh vegetables.

From Girasoles Farm, we proceeded to Bukid Amara in Lucban, Quezon where we saw a sunflower that is only six inches tall, with a big flower. Because of its novelty, I was imagining the money-making possibilities for enterprising plant growers, especially those living in and around Metro Manila. 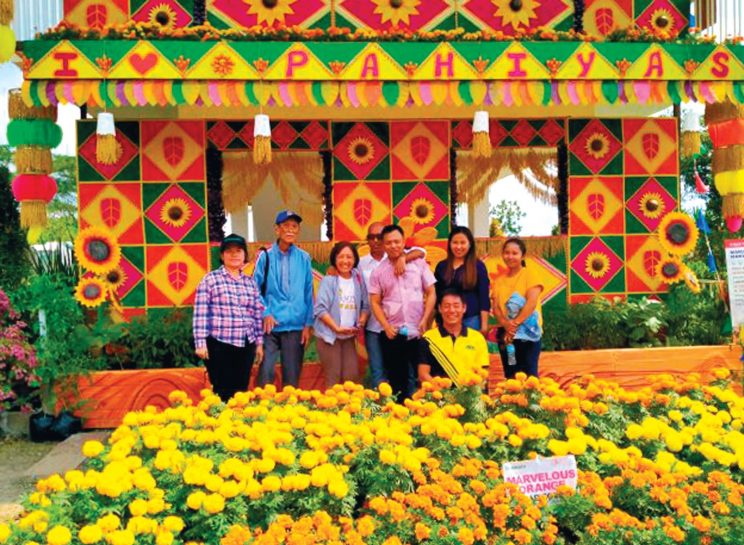 Dean and visitors under the Pahiyas theme.

Because it is very new and interesting, many people would be interested to buy some for themselves or for giving away as gifts. One can grow them to flowering size and then market the same through the social media, agri-bazaars, weekend markets, etc. The grower may also contact event organizers and propose to produce the dwarf sunflower for use as a centerpiece on the dining table.

Oh, there are so many possibilities, and the first to grow it for sale will have a good business. The variety is Smiley from Takii Seeds of Japan and is being distributed by Ramgo Seeds headed by Pamela Ong Chan.

According to Mike Caballes who owns Bukid Amara, Smiley will be ready for the market in 50 days from seeding. It should be grown in media that is well drained, rich in organic matter, preferably sterilized. The processed growing media such as Biomedia from Novatech would be perfect. Of course, additional fertilization will be needed, including foliar.

Well, here’s another opportunity for flower growers to make a good income. The best thing to do is not to procrastinate.