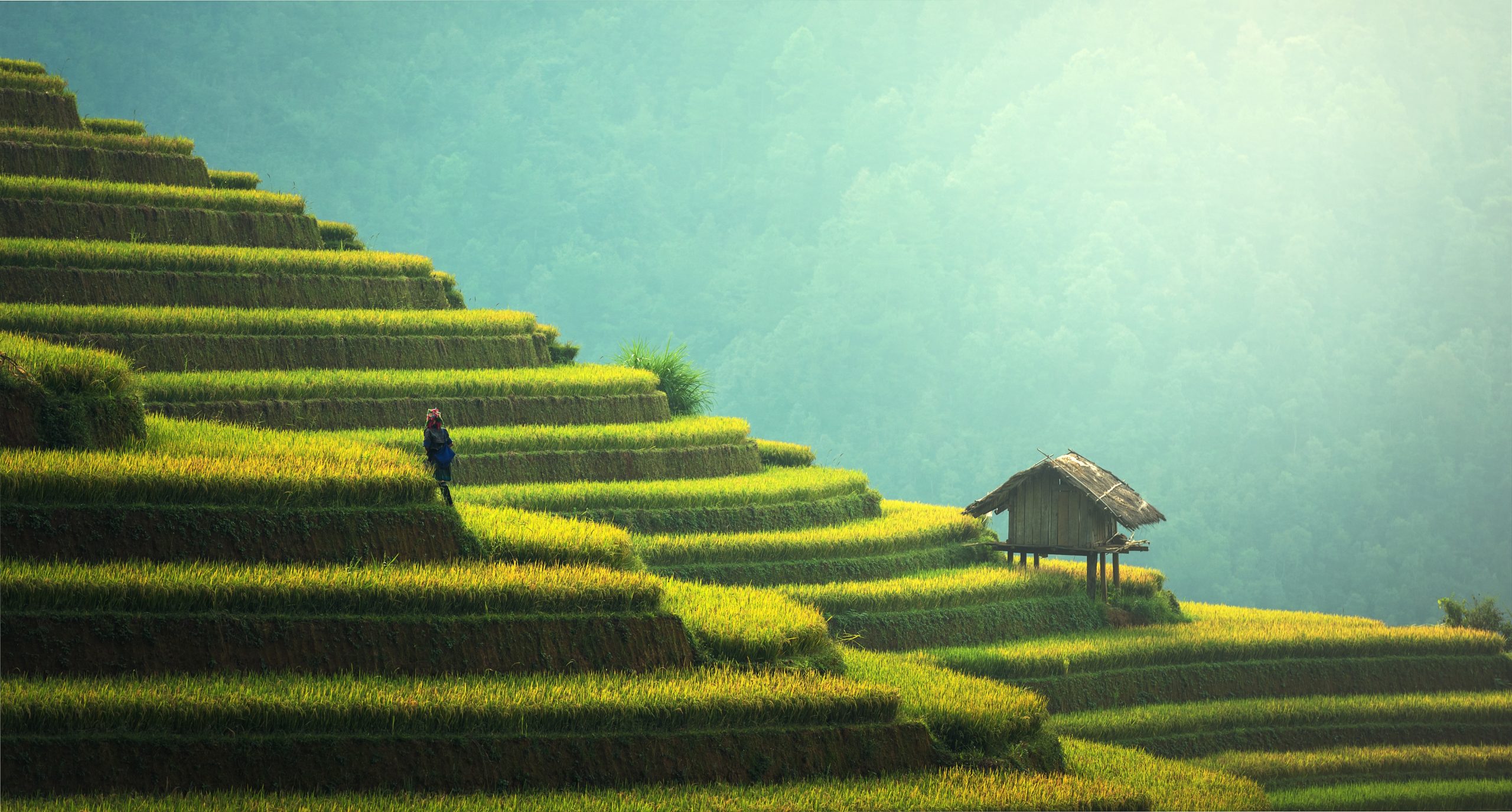 Rice is one of the most widely-consumed foods in the world: there are around 64 kilograms of rice produced for every person on Earth annually, providing around a fifth of all the calories we consume.

While we’re all familiar with the diversity of rice varieties and their uses—the jasmine of Thai cuisine, the basmati of Indian and Pakistani cooking, Italian risotto made from arborio or Spanish paella made with Valencian bomba rice—the scale of biodiversity in the rice family is breathtaking: the International Rice Genebank in the Philippines claims to hold more than 130,000 cultivars.

Some of the world’s most photogenic rice fields are also in the Philippines, in the highlands of the Cordilleras, the first ever UNESCO site in the cultural landscape category. Yet even before joining the prestigious list of World Heritage Sites in 1995, a process of modernization[1] was already underway which threatens that precious biodiversity—biodiversity which is only useful to ecosystems when it’s actively sustained in the fields[2]. In the 1960s, new types of rice were introduced from the lowlands, with a focus on increasing yields. As such, many of the traditional tinawon (or Unoy) varieties are no longer grown, and survive merely as exhibits in seed banks[3]. 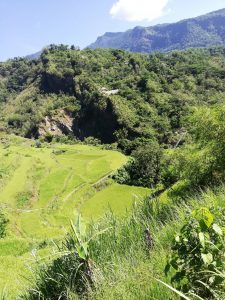 The first Slow Food indigenous community in the Philippines

However, outside the UNESCO zone, in Pasil, Kalinga province, there are rice terraces where the local Slow Food Community continues to grow native, traditional varieties. Indeed, it’s the first Slow Food indigenous community founded in the Philippines. Its 138 members cultivate high-altitude terraces where they grow more than 30 varieties of rice, several of which have already boarded the Ark of Taste: Chong-ak, Jeykot, and Ulikan Red Rice.  We spoke to one the leaders of the community, the mild-mannered, cheerful Lam-en Gonnay, about how far they’ve come and the road that lies ahead.

“We came to Terra Madre for the first time in 2010 after our products were first considered for inclusion on the Ark of Taste. That was when we first learned the principles of Slow Food, and since then we have been campaigning for the revitalization of our local food system. Much of our traditional food culture is being lost due to the introduction of so-called modern foods, including imported rice and the cultivation of standardized varieties. We went from village to village organizing farmers, with the aim of restoring value to some of our traditional rice varieties. These varieties are rare and can command a higher price on the market.”

“We organized a Terra Madre Day event in December 2011 that we called Indigenous Food Celebration, inviting five villages to bring at least four of their traditional indigenous foods which are not served as often anymore: the elder people of these communities were especially appreciative, as they are more keenly aware of what we stand to lose culturally if these foods disappear forever. Since then we’ve celebrated Terra Madre Day every year, moving around from village to village, even winning support from our municipal government. They have now adopted our celebration across all of Pasil, helping to spread the principles of Slow Food to every barangay.”

It’s testament to the power and reach of Terra Madre, which stretches far beyond a five-day event in Turin. “We gain so much knowledge, experience and self-confidence at the event,” Lam-en tells me, “and the farmers in Pasil are expecting us to represent them well among the international community. We record what we learn from other participants and take it back to our community; it’s part of our responsibility to continue our advocacy for the well-being of future generations.”

While this won’t be Lam-en’s first time at Terra Madre, there are two exciting new aspects of his community’s presence at the event for 2020: for the first time, these endangered traditional rice varieties from the Ark of Taste will be available, so you’ll be able to eat them at home without going all the way to the Philippines, and secondly—in an event we can’t fully reveal until the full program is published on June 4—there may be an opportunity for you to taste some of these indigenous rice varieties cooked according to authentic recipes as part of a Taste Workshop, so stay tuned! But what makes this rice so special, anyway? 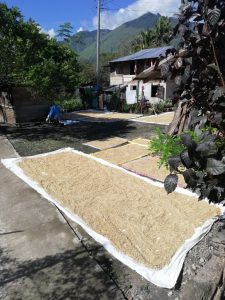 Most varieties of Asian rice (Oryza sativa) can be divided into two broad categories: short-grained (also known as japonica or sinica) and long-grained (also known as indica). The highland varieties of the Cordillera, however, represent a third subspecies, known as javanica, known to local people as Unoy (which is harvested once a year, unlike more commercial, year-round varieties). Chong-ak is an example of an Unoy variety, and remains one of the staple varieties for indigenous people in the area where it’s grown. It’s particularly connected to the Taguibong people, who serve Chong-ak rice during weddings and family reunions, as well as during Pusipus, a gathering of relatives for sick family members. Bundles of unthreshed Chong-ak rice are also displayed at the feet of the dead at funerals, to symbolize their wealth.

The origins of jeykot (“wonderful”) sticky rice can be traced back to the flood myth of the indigenous peoples of Luzon, when the survivors were given the rice to grow by the god Kabunyan. This traditional native japonica rice is hardy, being resistant to both cold and drought, and used in both sweet and savory local recipes, as well to make rice wine. However, in all of Pasil there just a few hectares dedicated to its cultivation, most of which is for local or personal consumption. The reason is simple: it’s not considered economically viable. And as in much of the Cordillera—particularly the tourist-focused UNESCO World Heritage area—younger generations are abandoning agriculture, and the rice terraces, to search for work elsewhere.

Unlike the other varieties listed here, Ulikan red rice is not an Unoy rice. “It can be planted in all seasons,” Lam-en tells me, “so it’s always available for the market, unlike other varieties which can only be harvested once a year.” Given its greater annual yield, it’s no surprise that this rice is a symbol of prosperity for people in Pasil, and is traditionally given as a gift to newlyweds. It’s also the subject of a new FAO Mountain Partnership launched last year,  which should help ensure its future. According to Lam-en, it’s a popular rice to use when making puto, the steamed rice cakes which are eaten both as a dessert and as an accompaniment to savory stews like dinuguan. 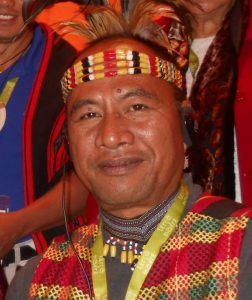 Come and discover the panorama of rice from around the world at Terra Madre Salone del Gusto, where, for five days in October, we’ll bringing the jewels of global food biodiversity together under one roof, a unique occasion to explore the extraordinary wealth of world gastronomy in one time and place. Much of this priceless heritage is at risk of disappearing, and we must eat it to save it!

[1] The impact of high-yield rice varieties (and subsequent biodiversity loss), the rampant growth of tourism and abandonment of agricultural work for tourist sector employment, climate change and cultural erosion in the UNESCO World Heritage area are discussed in Supporting the Resilience of the Ifugao Communities and Rice Terrace Systems (UNU-ISP 2013).

[2] As has been noted by various researchers, the biodiversity of rice is key to its resilience, and therefore to food security, in the context of the climate crisis.

[3] From the same USU-ISP report, page 12: “this reductionistic economic logic overlooked the differences between highland [native] and lowland [introduced] rice cultivation dramatically. The lowland rice was poorly suited to the cooler highland climates; was considered less nutritious and tasty by most research participants; relied on artificial fertilizers and pesticides which heavily damaged the local ecosystems (such as wiping out indigenous bird and fish species), as well as creating reliance on the powerful commercial interests producing those materials; and lacked the spiritual significance of tinawon rice, as well as differing in cultivation cycle, making it incompatible with Ifugao rituals and disrupting the synchronicity of rice farming across the community, and thus placing pressure on the cultural heritage (‘the gods got mad’, as one participant put it) and making communal work more difficult to organize.”