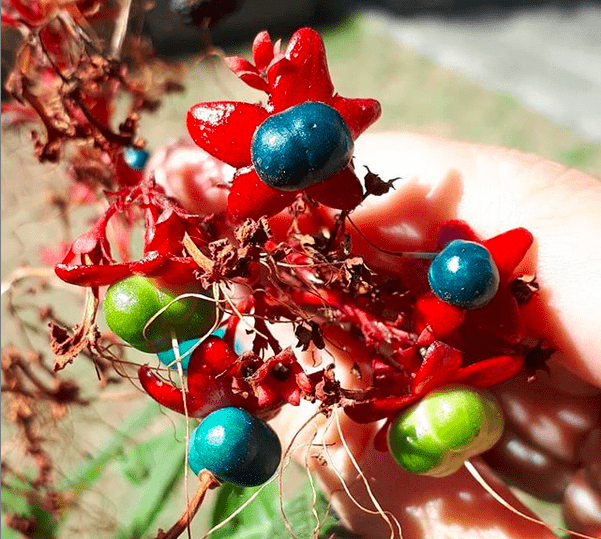 Sim was gifted some bleedingheart glorybower, aka kasopangil (clerodendrum intermedium)from Quezon. It's a medicinal plant that can help sooth coughs.

More and more people are falling in love with growing their own produce. This includes city dwellers whose day jobs have nothing to do with agriculture.

Bru Sim, who runs the award-winning graphic design studio Electrolychee with her husband Marcus Nada, is an example.

Sim describes herself as an “artist and lazy gardener” whose interest in urban farming started when she, her husband, and their daughter moved into their own place in a tree-lined village between Cubao and San Juan. “I decided to make our backyard my experimental ‘farm,’” she says.

“Our garden is maybe 3×9 meters,” she says. “We halved the garden with a neighbor. It was just grass with border planters, but we enjoyed planting herbs and veggie seeds from grocery produce.”

Her first success was being able to grow a basil plant from a cutting taken from a Vietnamese restaurant. “The original cutting came from a pho side dish, and its grandchildren are still producing food for us eight years later,” she says.

The couple also acquired a small property in Rizal a couple of years ago that they are developing into an agroforestry farm. “To learn more, I joined the Philippine Native Tree Enthusiasts (PNTE) group and attended seminars PNTE and our forester recommended, such as the free ones at the Agricultural Training Institute (ATI). (I) also invested a lot of hours on Youtube,” Sim shares. 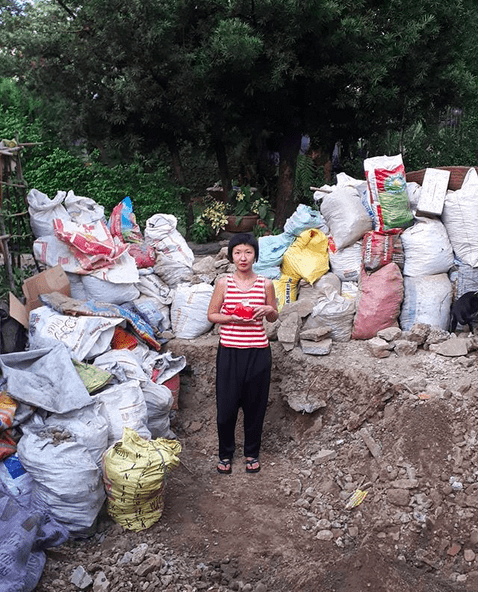 A portrait of the artist BG (Before Grden).

Choosing to plant herbs and vegetables

The artist chose to grow plants that the family could also eat. “Though I do enjoy all kinds of plants because they ground you, prioritizing edibles is more gratifying than growing ornamentals. So much so that to maximize our grow spaces, I’ve replaced our existing ornamentals with, say, blue ternatea and native mulberry (morera),” the artist shares.

Another major reason Sim chose to grow edible plants is because she was inspired by the resilience of her parents and grandparents during WWII and after. “I’m third generation Filipino-Chinese and my boomer parent, growing up with her WWII parents, hoarded everything. I think living sustainably (composting, segregating, growing your own food) is a positive reworking of my parent’s learned habit,” she says. “That’s also why I, now officially a crazy plant lady, walk around with secateurs, pruning overgrown bougainvilleas and snipping off dama de noche cuttings.” 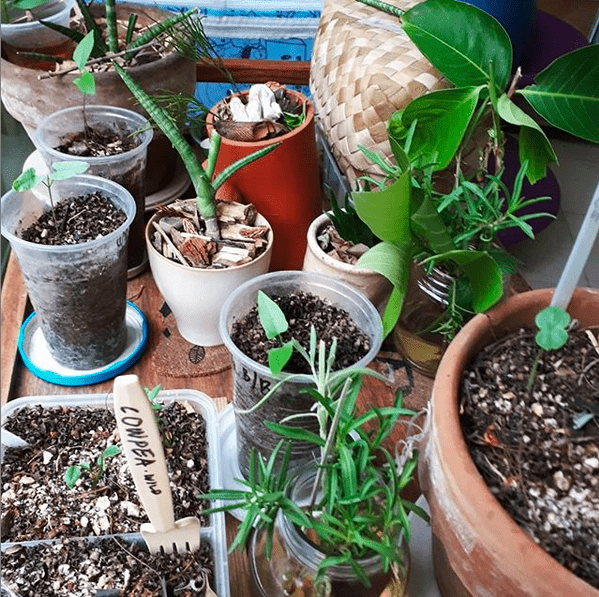 Some edible plants that can grow in a city garden

Sim thinks of the garden as both an experiment and a work in progress. “It looks a mess but my husband is helping me organize it,” she says.

The garden is “a 4-foot deep lasagna garden layered with lots of organic matter: 20 sacks worth of coconut husks, months’ worth of collected leaves, wood and twigs, kitchen waste, and ordered soil.”

Also known as ‘sheet composting,’ a lasagna garden requires no tilling or digging. Instead, organic matter is layered over each other, much like the beloved pasta dish, and allowed to decompose over time, resulting in growing material that’s full of nutrition.

There are a lot of things one can grow in a small plot of land. Sim lists what they have in their less than ten-foot garden:

“Organic plants that we eat and use. Potted herbs (tarragon, mints, basil, stevia, rosemary and lavender), medicinals (red days essentials like sambong and mugwort a.k.a. damong maria—every woman should plant these two, oregano, lagundi-which can be grown as a shrub in a container, blue ternatea, roselle), fast-growing leafies that grow from cuttings (moringa, talilong, alugbati, kangkong, talbos ng kamote).”

“Small trees: balimbing (starfruit/carambola), madre de cacao, and an overgrown aratilis—trying to dwarf this because cutting off branches will just make the tree coppice and grow more, but for now it provides much needed summer shade to our dischidias, native tree saplings, and two raised veggie beds.”

Whether newbie or expert, gardeners will always encounter challenges. Sim shares some of hers: “I think the fertility abundance might be taking a toll on our malunggay, papaya and kakawate trees though, they’re not looking so great despite being easy growers. On the other hand we got a lot of recruited plants due to the added fertility: gabi and other elephant ears, ferns, aglaonemas and edible mushrooms.” 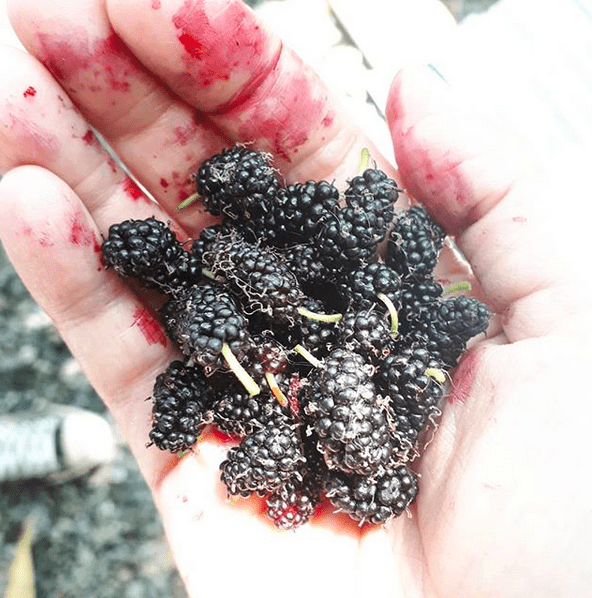 Sim holds a bunch of Philippine mulberries that she plans to grow in her garden.

Sharing the love of nature with the next generation

Sim is conscious about sharing her appreciation for nature and growing one’s own food with her daughter. This starts with food and goes all the way to foraging. “Our entire household eats the same food. So what we eat, our toddler eats also,” Sim shares.

“Did you know that kids now are so deficient in nature that some don’t even know how to walk on grass? Ever since (our daughter) was a baby we made sure that the outside is part of her environment, with us around she has a safe place to run, touch, smell, taste and feel.”

So far, the results have been excellent: “She’s 3.5yo now and we’re happy she has a sense for the world. Having access to a little green is important to human development. Our foraging expedition is a game; a nature walk where we engage our senses and identify plants, insects and animals we see en route.” 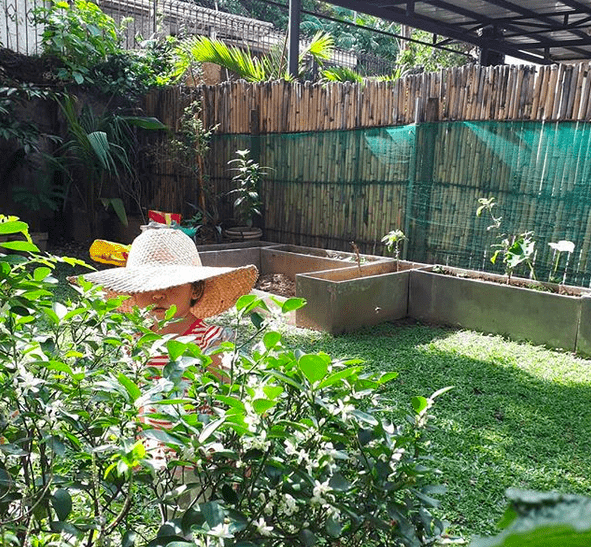 Sim’s daughter enjoys hanging out in the garden.

Sim shares her gardening victories and discoveries on social media, particularly on Instagram. She also talks about her adventures in foraging for edible plants around the metro.

In part 2, of this three-part series, Sim talks about how she got into foraging, the joy it’s brought her, and the precautions she takes when looking for edible plants in a polluted city.

From fashion to farming: A visit to Patis Tesoro’s permaculture garden in San Pablo, Laguna