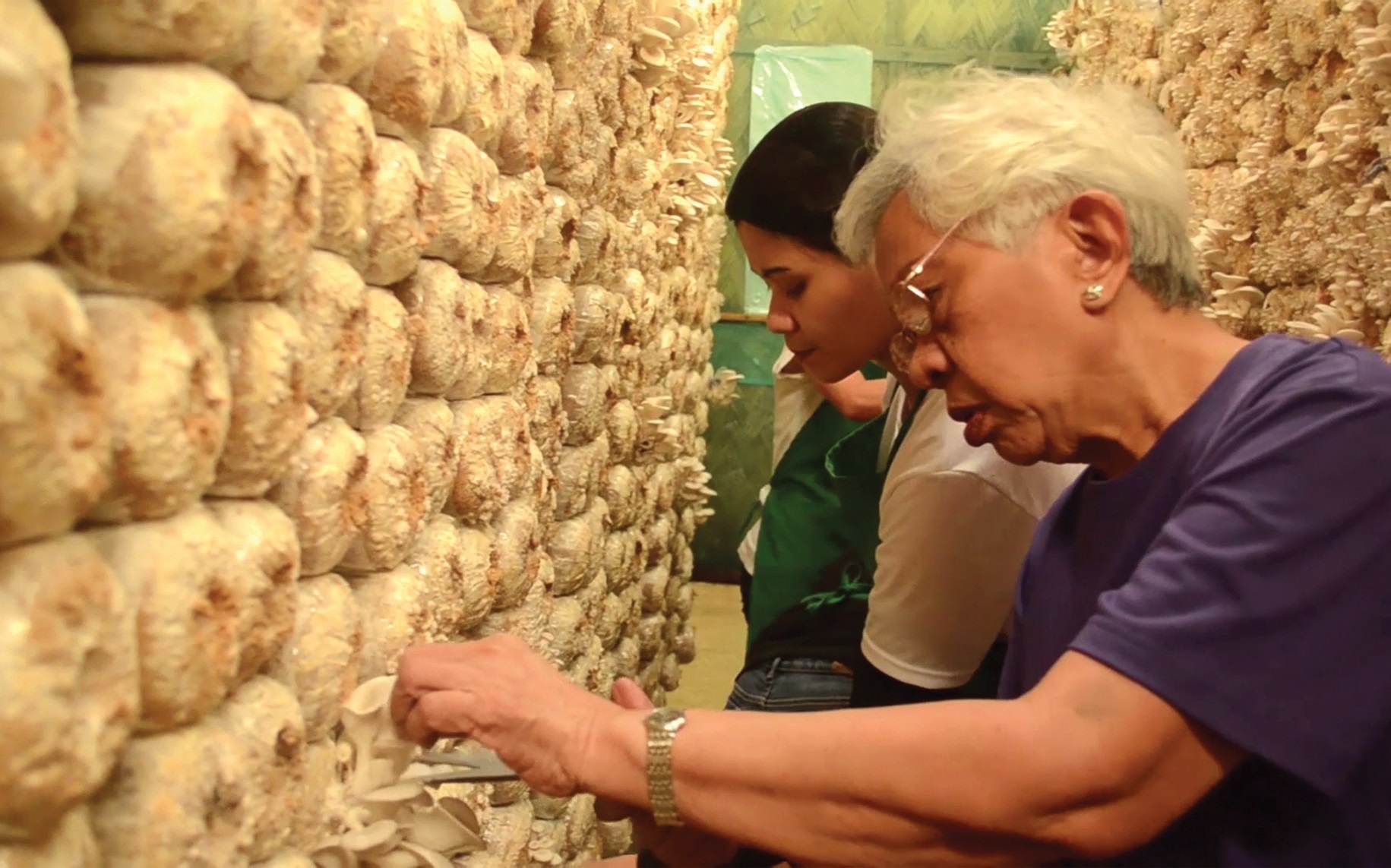 From being a caterer famous for her crispy kangkong, to becoming a pioneer in the crispy mushroom chips industry, Aurora Sumulong, more known as Mommy Au, revolutionized the way people consume mushrooms, while at the same time, helping others with her social enterprise.

One day in 2009, Mommy Au was walking down a public market in Plaridel, Bulacan when she stepped on something white and spongy. She asked the vendor, whose stash it had fallen from, what it was. She was told that it was an oyster mushroom and it can be cooked in several ways. It was then she decided to turn it into a snack.

After many trials and errors, Mommy Au perfected her mushroom chip recipe, which has become the best selling product of her company, now known as Mom’s Haus of Mushroom (MHM).

Mommy Au and her workers check and portion mushrooms for cooking.

It was during 2011 when she officially registered MHM as a business under the Department of Trade and Industry (DTI) and after three years, she has penetrated the market with the help of her now managing director, Romeo “Jay” Martin Jr., a former Operations Analyst in a multinational company who left his corporate job to farm and sell cassava chips.

In 2014, Mommy Au and Martin Jr. officially became partners. “It was very challenging since a big supermarket was asking us to produce a truckload of chips, wherein during that time, we only had a kitchen set-up,” said Martin. He also said that it took them around 30 presentations to get their first client, but that was the spark that lit their business. In that same year, they projected that they should be exporting in five years, and Martin confirms that their projection came true and is now in the process. “I don’t know how we’ll do it but we’ll get there,” he said.

MHM is linked to Bliss Farm, which produces the mushrooms they need for the chips. The chips are sold in supermarkets and petrol stations all over the country. MHM products have even made it to the global market. And for them to be able to supply truckloads of chips to their clients, machines were given to them by the Department of Science and Technology (DOST), as well as grants from the United States Agency for International Development (USAID). From a backyard kitchen into a manufacturing factory, MHM has come a long way.

The secret (recipe) to her success

First, Mom’s sorts the oyster mushrooms by separating the cap from the stipe or the stalk using a spatula. After sorting, the mushroom caps would be put into a frying mixer. Then, the fried mushroom caps would be placed on a stainless strainer for the oil to be initially drained. The next procedure is de-oiling the mushrooms wherein it will stay in a de-oiling machine for two days. This process is important to ensure the crispness of the mushroom when baked. 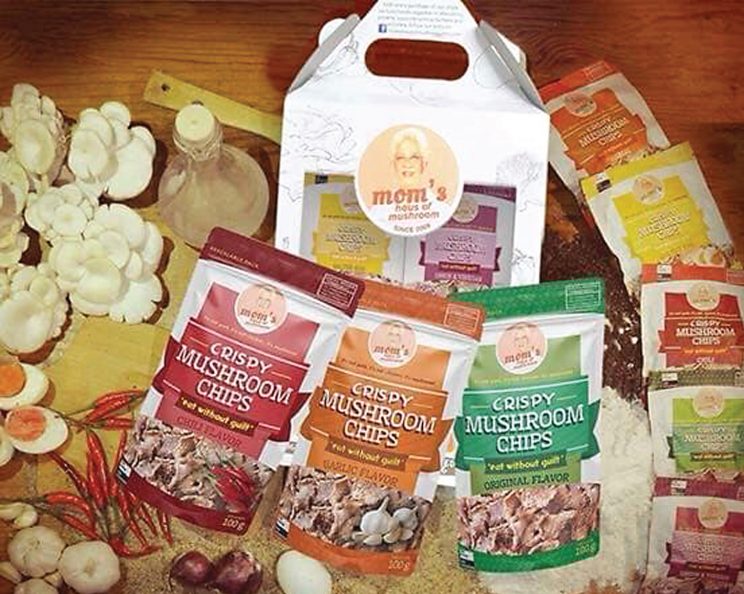 Mom’s Haus of Mushroom’s 75g and 100g packaging, both for local and export market.

The chips are available in several flavors like garlic, salted egg, and onion and vinegar. The chips are packed in a way that retains their crispness.

MHM hires local workers in their factory in Amadeo, Cavite. Before Mom’s, there was little to no livelihood in the area, but today, the employees are able to buy their necessities, and have been able to send their children to school.

MHM also partners with agriculture and biology students in nearby universities for further research. There are also plans to organize a program with supermarkets to turn their non-biodegradable product packaging into school bags for children. Currently, MHM has over 20 workers, however, it aims to impact at least 7,000 families in the long run.

Not only that. Every week, the management of MHM conducts a values formation seminar where they check on how everybody is doing, which strengthens their relationship with each other. Aside from providing livelihood for the workers in the factory, MHM also provides volunteer training for some prisoners in Muntinlupa.

It has been challenging for Mommy Au, Martin Jr., and the whole MHM team, but today, everyone benefits from this success. Martin Jr. shared their steps in having a successful business, which they have made an acronym for; “P.P.A.P.” is their combo (combination) move in making it in the industry and it begins with a Prayer. “It should be our first resort in everything and shouldn’t be the last,” said Martin Jr.. The second P stands for Planning. For him, it is important to plan according to their mission and vision. Next, A means to Act. Martin Jr. simply put it as plans need actions to be done. And the third and last P means Positive Development. “Always look on the positive and brighter side even if a lot of challenges are on the way,” concludes Martin Jr.

Little did Mommy Au know that mushrooms would make her money. Not only Mommy Au, but the whole MHM managing team, believes that their main product is not the crispy mushroom chips, but the “pack of hope” inside that changes people’s lives.

Degree in Marijuana will soon be offered in a university

How about farm inputs? Farmers also need them to ensure food production during community quarantine