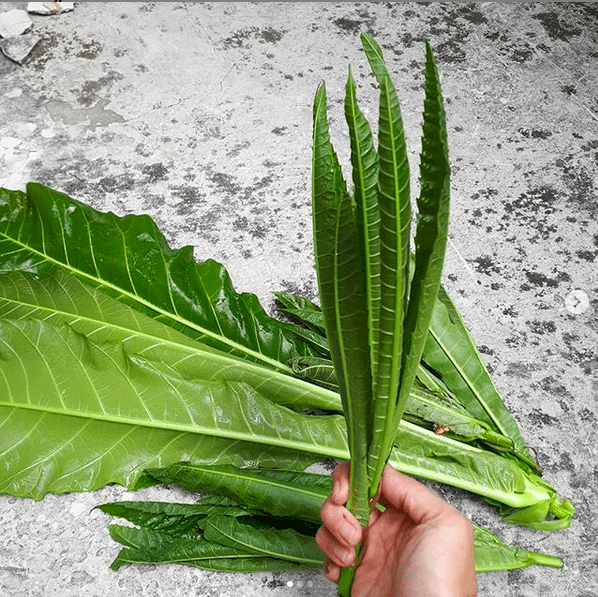 More and more people are falling in love with growing their own produce. This includes city dwellers whose day jobs have nothing to do with agriculture.

Bru Sim, who runs the award-winning graphic design studio Electrolychee with her husband Marcus Nada, is an example.

In Part 1, she talked about her edible gardening journey. Now, Sim talks about how she started foraging in the city.

Foraging is the act of searching one’s immediate surroundings for items that they can eat or use. Foraging has become hip in the food world, with chefs like Rene Redzepi, chef and co-owner of the two Michelin star (and four-time number one of the World’s 50 Best) restaurant Noma, turning foraged items into amazing dishes.

Sim says her interest in foraging got piqued “just walking and looking around.”

“I’m a self-taught artist and naturally inquisitive, I’m not selective when it comes to appreciating plants be they weed, veggie or ornamental. Apps like PlantNet and acquired local books from @FB Green Corner, such as the Guide to Grassland Plants and Philippine Native Trees 101 helped me become more observant,” she shares.

“(It’s) safe as long as you replant (what you’ve foraged) and let it grow first before harvesting, especially if you find, say, omega 3 rich purslane growing in wall crevices and cracks,” Sim says. “Bacteria can’t go up into the plants through its roots, but contaminants may be ON the plant surface (that’s how e.coli contamination happens on veggies, so always wash hands before handling foodstuff).

“We also wash the leafies that we will be cooking to remove carbon residue from automobiles. If you notice now there’s hardly any black soot or alikabok during lockdown. At least Mother Nature is happy.”

Finding out if a plant is safe to eat can be easily done as long as one is willing to do a bit of research. “Plant identification apps, books, consult with experts, shoot them an email or pm. Join like-minded groups online, many are most helpful. Noting the scientific name of the plant is a valuable and dependable reference, since it may go by many nicknames depending on the region,” Sim says.

When it comes to where one can find plants in the city, the sky’s the limit. Even random cracks on the sidewalk can be fair game. Sim finds edible plants “anywhere my feet or errands take me. Usually it’s just within the village or its immediate radius. I was in IIRR, Cavite just this February and that was a welcome nature walk, (where I was able to) pick up pinkapinkahan (native tree) seeds there.” 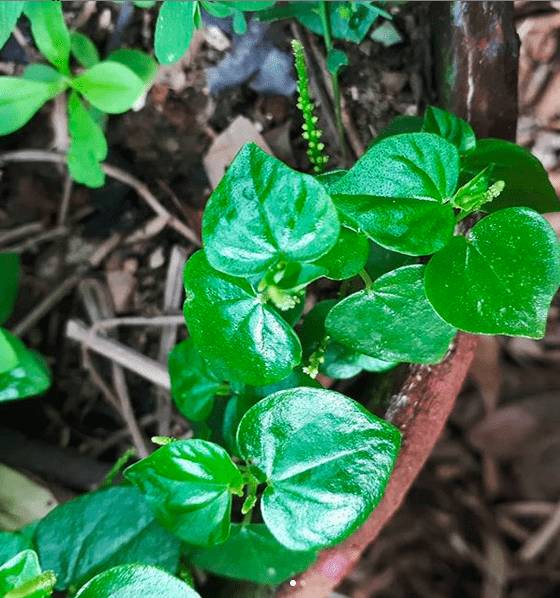 Part of Sim’s Instagram post about her foraged pansit-pansitan reads, “is a DOH-endorsed safe and effective medicinal plant. The shallow-rooted “weed” is traditionally used to treat fever, cough, colds, headache and arthritis. I’ve had this in a salad. The stems are fleshy and the leaves are slightly spicy and peppery, like a way milder ikmo (piper betel).”

Cooking and eating what one finds

The best part of foraging has got to be trying what one gathers. Again, this should be done only after positively identifying the plant. making absolutely sure that it is safe to eat, propagating it in a safe environment to eliminate toxins brought about by pollution, and taking proper precautions in preparing it for consumption.

“I’ve graduated from sampling wild fruit (e.g. ivy gourd, mouse cucumber, and the not deadly nightshade—when ripe and entirely black) to growing wild greens I can maintain in the garden,” Sim shares.

“Staples include the native talilong or talilum. Simplest prep is to pluck some leaves off, rinse, and eat as a crunchy side dish. It’s a little citrusy so it can be added to sour broths (sinigang, paksiw).

“Both talilong and the snubbed lubi-lubi shoots can be added to basic dishes like monggo or bulanglang. In Bicol it is cooked with gata, like laing. I recently found creeping foxglove in a neighbor’s patch and read that its leaves can be eaten like spinach. I’m repotting that next. Plus the flowers are pretty, attracts pollinators, and are edible.” 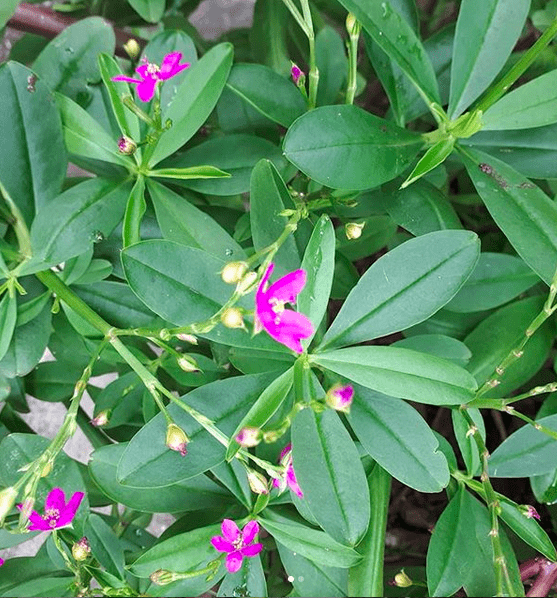 Part of Sim’s Instagram post on talinum reads, “TALILONG or talinum is a native succulent rich in fiber, protein (iron and calcium) and vitamins A and C.”

A word on fungi

On her Instagram feed, Sim posted about finding and trying puffballs, a type of fungi. This can be very dangerous, since some fungi can be poisonous. Thankfully, these ones were edible, and even Sim herself says that one should never, ever eat foraged fungi unless they are 110% sure that they are edible.

“Firstly, NEVER taste a mushroom you can’t properly ID because it can prove fatal. Especially for puffballs ,which are unusual here and have a poisonous lookalike, the earthball. Always consult with experts and do dogged research,” she says. “Because our garden soil has a lot of detritus organic matter there are actually two kinds of expert-verified edible mushrooms growing in our garden. Both are edible at their egg stage.”

In her case, this involved not only double checking the type of puffball in books, websites, and apps, but also consulted with a mycologist (a scientist who studies fungi). Even then, we urge people not to try this.

“After double checking plant ID apps and Google, I sent an email with photos to a US mycologist who got very excited. I actually shipped him dehydrated samples of both for proper identification (he paid me back). His site doesn’t relay mushroom edibility so I used his IDs to help me find scientific journals and foraging sites that do. Thankfully both are edible, just haven’t tried the juvenile stinkhorn because the puffball smelled so much better,” Sim says.

“I’m a geek that follows through so after double checking plant ID apps and Google, I sent an email with photos to a mycologist who got very excited. I actually shipped him dehydrated samples of both. The stinkhorn sample helped properly ID the mushroom within the scientific community (yey science),” she adds.

“The mycologist ID’d the second mushroom as related to calvatia rubroflava. Except for the appearance of the outer skin, other descriptions on his site checked out with my own documentation (e.g. it stains yellow, its inside is all white like cottage cheese which turns into powdery brown spores in a few days). Because the mycologist’s samples and photos are from the Americas, I spent many hours digging through other sites and scientific journals that would corroborate my puffball’s description. Eventually I found an experienced farmer who said they’ve encountered this in the Philippines. He says that it’s edible but he hasn’t tried it,” she adds.

When asked what the puffballs tasted like, she said, “Experienced foragers call puffballs ‘breakfast mushrooms’ because they blend so well with eggs. That’s the first way we cooked it. When freshly harvested or frozen the puffball has a light almost indistinct flavor to it.

“Next we tried storing a couple of puffballs in a paper bag in the ref for three to four days. It was starting to turn red and had a stronger scent. We sauteed that with spinach. This aged puffball was pungent, like goat cheese or lamb, very flavorful but not for everybody. Aged and fermented puffballs I think it would be a yummy addition to soup stock.” 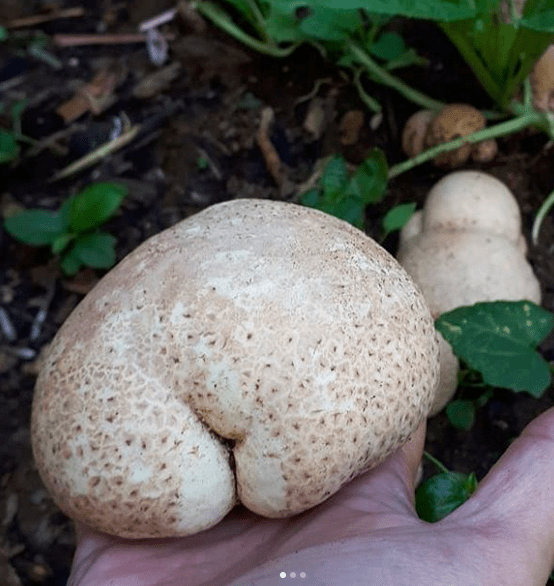 Part of Sim’s Instagram post on this fungi reads, “Edible fragrant #puffballs growing in the shaded pechay bed. Ever since we lasagna gardened (sheet layered grass, soil, collected leaves, woodchips) our little plot, the backyard has become much more diverse with many recruited flora, plus the birds, insects and amphibians it attracts (a tree frog!).“

Once again, we don’t advocate consuming unidentified plants and fungi, and foraging should be done at one’s own risk. In Sim’s case, it’s her diligence in identifying plants on more than one platform (books, websites, apps, etc.), checking with experts, and making sure that plants are as free of toxins as possible that has kept her foraging safe.

When done properly, foraging can be an interesting way of discovering one’s surroundings, as well as enabling one to experience how our hunter-gatherer ancestors probably searched for edible plants before they learned to cultivate them.

In part 3 of this three-part series, Sim offers tips for newbie gardeners.

ASF-prevention in Western Visayas strengthened by LGUs and DA