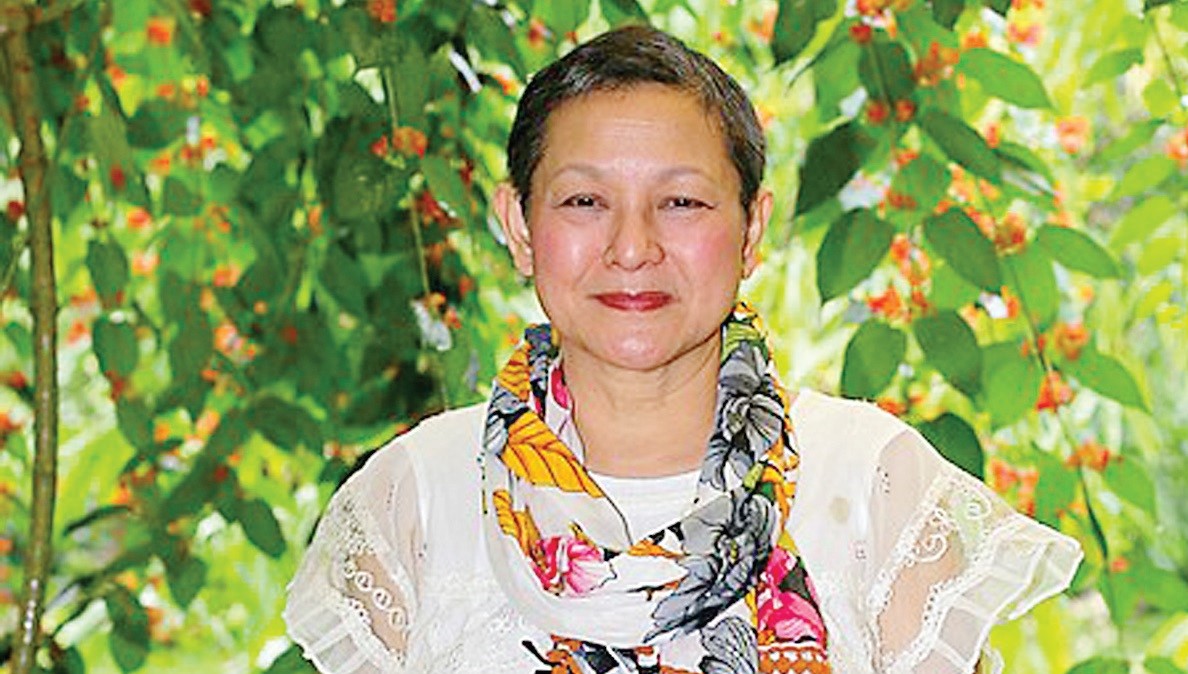 Fashion designer Beatriz “Patis” Tesoro has always wanted to live on a farm. “Because I grew up in Iloilo in the 50s… that was my dream,” she says. “But I also like growing my own food because in the 50s, this is what we did.”

A few years ago, Tesoro sold her house in San Juan City, Metro Manila and moved to a three hectare property in San Pablo, Laguna where she maintains her work shop, as well as a small BnB (bed and breakfast), and restaurant called Patis Tito Garden Cafe. “I moved here 40 years ago but I never lived here. I was always working as a dressmaker in Manila but now that my husband is gone and I’m 68, turning 69, and this is the life I have,” she says.

She tells her story as she gives a tour of her garden, which is composed of pathways that wind around different plants, some of them ornamental, most of them edible. She knows each and every one. “This is talinum. There is no pesticide here. It’s like spinach,” she says, plucking a leaf and offering it to taste. “I grow plants that I like to eat or I like to use.” 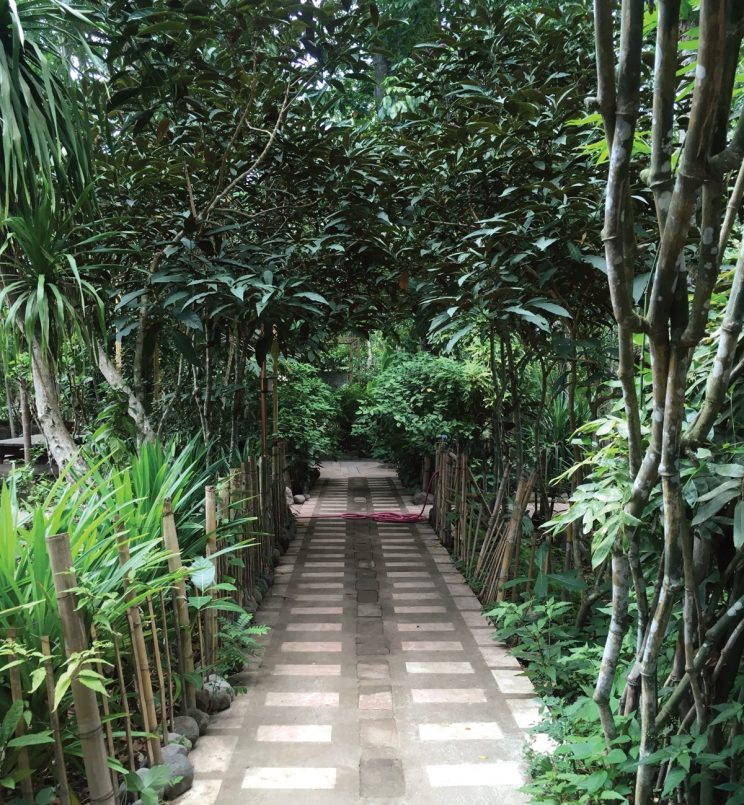 The three-hectare property is filled with different plants, most of them indigenous, that Tesoro uses in different ways, such as as ingredients for the kitchen or as incense to enhance relaxation and keep bugs away.

The designer is known for championing Philippine fabrics, most notably piňa, and taking inspiration from traditional Filipino design elements. Her designs are colorful, flamboyant, and unmistakably Filipino. This is reflected in her home and garden, and in the BnB that also sits on the property.

She practices permaculture, which revolves around the design philosophy of working with nature and treating plants and animals as a whole system instead of separate parts. “I always seek for what’s the best. In permaculture, it’s so rich,” she says. “The way I work is I work with plants first before I even building anything. I work around the plants.”

The list of plants in her garden is extensive. A partial list includes okra, oregano, curry, Meyer lemon, balimbing, lime, labuyo, papaya, atsuete, and sambong. There are plots dedicated to lemongrass and Philippine cotton.

“I have vermiculture, but not a lot because I’m (still) learning,” she says, leading the way to the dark, moist shed where the troughs that contain the worms are housed. “It has to be in an enclosed place like this because the birds, rats, lizards, anything can get at them.”

The worms are fed organic matter such as rotting leaves and vegetable scraps supplemented by dried pig and chicken manure. “We cannot give them fish or meat. Usually the fish and the meat we give it to the dogs.”

The fruits of a small orchard

Tesoro also has a two-hectare orchard filled with lanzones, rambutan, banana, and coconut trees. To get there, one has to walk through small plots where pandan, citronella, and lagundi, are planted.

There is mulch piled at the base of some of the fruit trees to encourage growth and fruit bearing. “I do it for pleasure. I do it for what I can use for myself but I do have another farm where we harvest saba around 11,000-15,000 fingers a month,” she says. “I don’t add additives, it’s totally the sweetness of the tree and you can actually make a lot of money.”

A river cuts through the orchard, lined with black bamboo. The plants keep the soil rich and helps separate her property from her neighbor’s, who happens to be James Cooper, known in the 80s for his chain of salons.

A nearby grove serves as the final resting place for dogs who have passed. “For every dog that dies, we plant a tree. There are four dogs (buried here),” Tesoro says, adding that she plans to erect a dog statue to mark the spot. 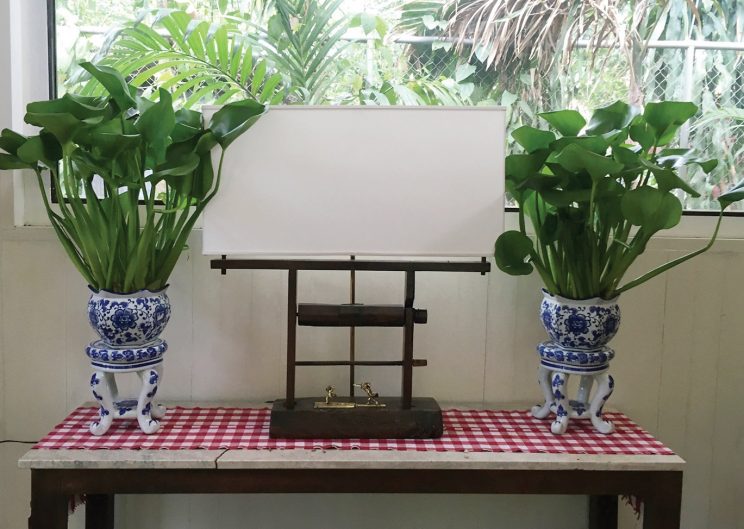 Water lilies from the river that runs through the property are used as elegant decor in At’s House, a vacation house for rent within the property.

The orchard came with the land, but it wasn’t being maintained. Tesoro had to set up a generator to fulfill the orchard’s water requirements. She invested about P30,000 (apart from buying the land), and made P60,000 when she sold the first batch of rambutan. “If you’re persevering, you can make money. You just have to know what to do,” she says. “Many people think it’s instant, like instant ramen, but you have to work with God.”

She emphasizes that to make money as a farmer, finding the right clients is important. “There should be someone who will buy it at a reasonable price,” she says.

Community is important to her, so she tries to offer jobs to people related to her employees, or who live nearby. “My bantay (guard), who I actually pay a salary and a sack of rice to a month, his wife decided to become a biyahera (merchant). Instead of giving it to another person, I give it to him and they harvest,” she says. “So every harvest, they harvest it all, they bring it to Cavite to sell. They buy it from me at P1.50 (per finger). From that P1.50, I give them 10%. So if I harvest 11,000 fingers, they get 10% from that, so that’s 15 cents per finger.

“They learn how to be entrepreneurs. They buy it from me, I give them a percentage, they bring it to Cavite, and then they sell it with some profit. So what happens is they get on both sides. They’re very happy with it and I’m happy with it, so that’s fine.”

The other fruits are sold to middlemen. There are plans to organize a lanzones party, where guests can pick and eat lanzones, and maybe take home some as well.

“It’s not a big business,” she adds. I’m small, very small but for me it’s quality of life, enjoying the fruits of the land.”

Giving city mice a taste of the provincial life 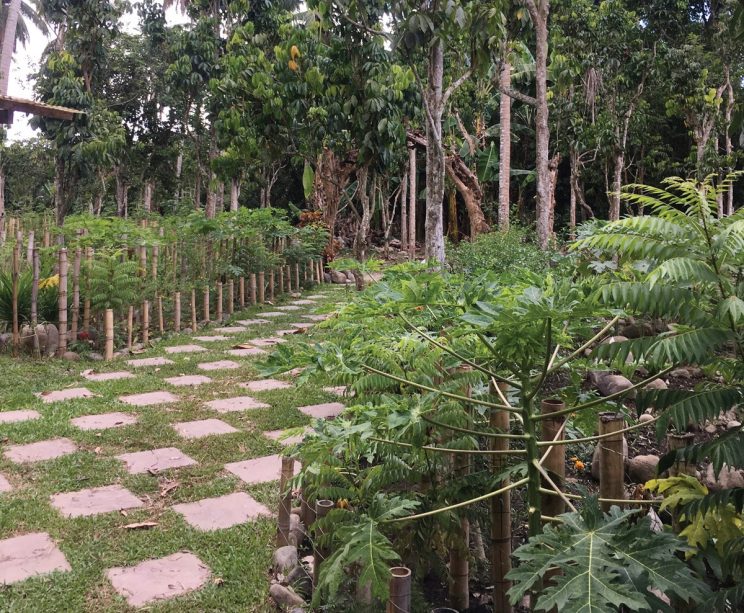 Manicured paths cut through the garden, allowing visitors to get a better glimpse of the fruits and herbs that will eventually make its way to their plates.

The property’s BnB is an open secret among well-heeled urbanites looking for respite in the province. There’s a house for rent called ‘At’s Place’ after photographer At Maculangan. More rooms are being built in another area of the property to house more guests. “It’s more like staying at somebody’s house,” Tesoro says. “And if you’re afraid of nature, you would hate it.”

There is also an area for events which can hold 70-100 guests. As much as possible, everything is grown and/or made on site. Other plants in the garden include kapok, atsuete, different lemons and limes, different kinds of bananas (at least one of them purely ornamental), siling labuyo, and okra. There’s sambong to make tea with, and citronella to repel mosquitoes. “I dry it, tie it together, then smoke it (over charcoal)… so you smoke it so the bees and flies don’t disturb you,” she shares. “I don’t buy charcoal. Whatever falls down in the typhoon, I make it into charcoal.”

Relocating to the province doesn’t mean becoming inactive in fashion. The designer has branched out into ready-to-wear (RTW) and still sees clients once a week at Tesoro’s in Makati.

Some of what she learned in the fashion industry can be applied to running a small farm. For example, she’s adamant about giving employees values training, which helps foster responsibility. She tries to hire from within the community, and seeks to find ways to enrich the lives of those around her.

She also stresses that catering to a specific demand is important. It’s one thing to grow things for oneself, but if one is to farm for profit, it is important to see what people will buy, and then educate them on why they should buy what you produce. 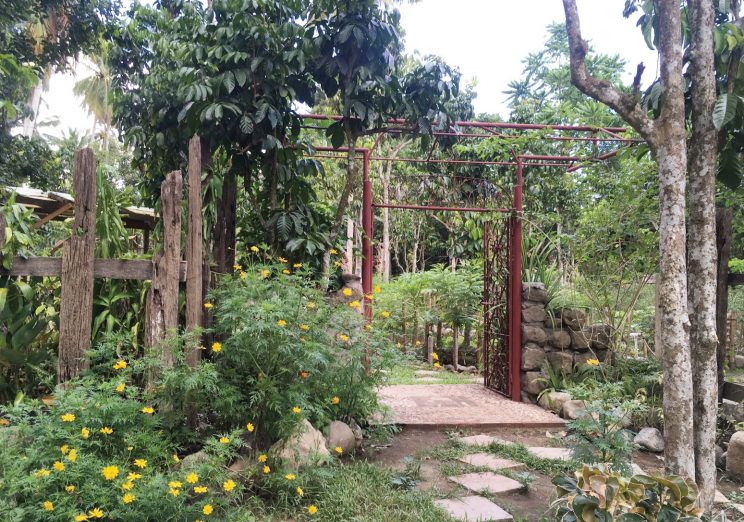 The designer is an avid dog-lover, and so many parts of her sprawling garden have gates to keep her canine friends from entering.

One’s presence on the farm is also important. “You have to be close to the land, you can’t just give people orders,” she says. She tells of a friend who expressed interest in living the same lifestyle, but balked when Tesoro said that to do so would mean that the friend would need to travel less. This doesn’t say that the designer doesn’t travel at all–at the time of the interview, she was getting ready to go on a work-related trip to Romania–it’s just that she doesn’t do so very often, simply because she loves her life in San Pablo. “For me, it’s not work because I love it and that’s what it should be for all, including young farmers,” she says. “You gotta love what you’re doing.”

Marketing is also essential. People should be able to find what you are selling and they should know how to use it, especially if it’s a niche product. She uses zucchini as an example. “If people don’t know how to buy zucchini, you do something special like fried zucchini pie and you give it to people for free,” she says. “It’s simple marketing.”

Relocating to the province hasn’t just improved her health and wellness, it’s helped with her creativity, too. “I can create better here. The creativity juices are so much better here than in San Juan, in Manila, in an aircon. Here I look out, I see the sun rising, I see the sun setting. I hear the birds. When your brain is tired, when it feels stressed out, this environment is the best. That’s what farming is all about.”