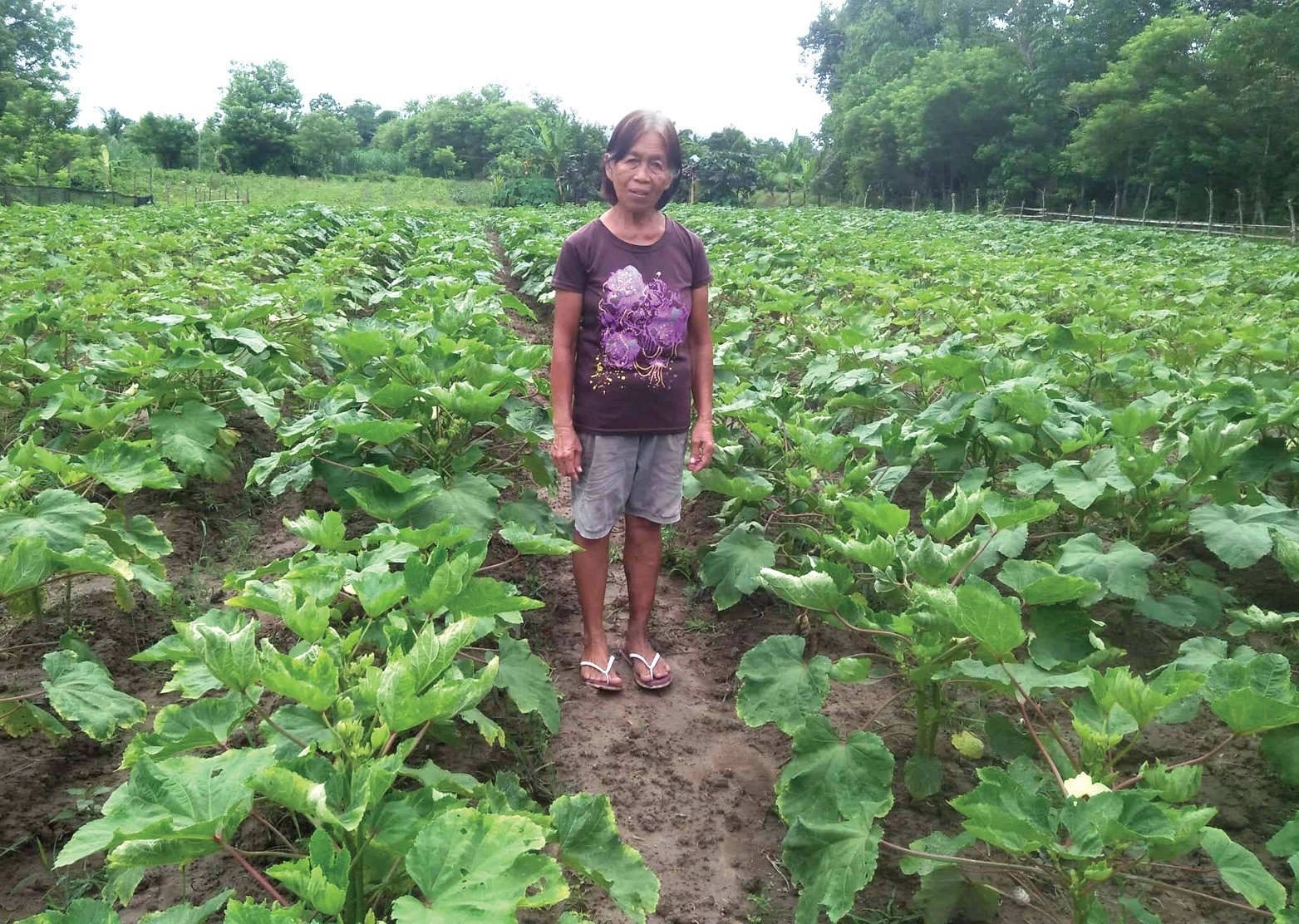 Virgie Rebleza is a 62-year old housemaker and grandmother from a remote community of Kidapawan City, who is now an active vegetable entrepreneur.

Her enthusiasm started when the Kidapawan City Agrarian Reform Office and World Vision, a global humanitarian organization that focuses on the welfare of vulnerable children and families, shared its partnership and advocacy on natural farming system, and Jadam ultra-low cost farming technologies on organic vegetable gardening to the agency’s partner for community development.

A fresh start as an entrepreneur

“I am just dependent on my husband’s income. Sometimes it is not enough,” Rebleza passionately shares in Cebuano.

From a couple of vegetable seeds given by World Vision and DAR, Rebleza started her garden in a 5,000 square meter lot. She transformed the abandoned land into a productive area for planting okra.

“After I learned a lot from the organic training I attended, it motivated me to try gardening and utilize a parcel of our land.”

Rebleza is one of the active members of Onica Agrarian Reform Beneficiaries Association (Onica-ARBA), a community- based people’s organization established by City Agrarian Reform office in March 2015 and duly registered by Department of Labor and Employment.

The organization started with 28 members in 2015, and after 4 years, membership increases to 63.

As part of the Department of Agrarian Reform’s (DAR) mandate to capacitate and strengthen its members in the community level, the office implemented the Sugarcane Block Farm Project.

The Sugarcane Block Farm Project (SBFP) of DAR Office in Kidapawan City, North Cotabato, initially supported the 4-hectare project site (2- hectares as demo farm, while the other 2 hectares as nursery site). This project was turned over to the organization in January 2017 as DAR’s support to its agrarian beneficiaries.

DAR also turned over to the organization one farm tractor worth P3.5M and P2M worth of capacity building, including financing and one-unit shredder worth P145,000.

In January 2019, the City-DAR formally handed over all the responsibility to the community. In the same year, Onica-ARBA was able to acquire additional 7.5-hectare sugarcane farm. The additional sugarcane farm is now independently managed and financed by the organization.

When Rebleza decided to till the land and convert it into a vegetable garden, some members of the organization decided to help her, while others volunteered to operate the farm tractor.

“The training is timely because as SBFP beneficiaries, we need to wait for a year before earning an income. We really need alternative livelihood that could help our family. The organization gave me P8,000, as start- up capital, and bought additional seeds of okra,” shares one of the members.

Gradually gaining extra income out of a vegetable garden

Convinced of the significance of the training and its possible output towards new livelihood project, Rebleza passionately makes organic concoctions and fertilizer, which she applies in her garden.

Rebleza’s okra garden started in May 2019. “I enjoyed my new venture today. God really reminds me that age does not matter. It gives me a prime purpose and inspiration to wake up happy and hopeful every single day. At night, I have lots of plans for the next day, and properly maps up my actions for my vegetable garden.”

During her first harvest in July 2019, Rebleza was able to harvest five kilos of okra for P40/kilo (gate price) and if sold in retail, she could sell it in the wet market by R60/kilo. “I am amazed with my experience to harvest fresh and organic okra. At the start, I am ashamed to sell it even in my neighborhood, but through the encouragement of the staff from the City-DAR office. I overcome it,” she half smiles while narrating.

“The business is not just for those with a course or degree. Even if we are old, we can be an entrepreneur. We can have additional income without depending on our spouse.”
Now, she earns an average income of P300-P500/per week, which helps her family, as well as her grandchildren for their school allowance.

For Dinah Nallos, the agrarian reform program technologist of DAR, regular monitoring and regular coaching are vital components of a successful community- based organization.

“As a government staff, I am always challenged to do the extra mile, making sure that I work beyond what is in my job description. I believe this is also God’s grace because I am agriculturist by profession and an entrepreneur. I can relate to them most of the time.”

“If we can empower, monitor, guide our beneficiaries in terms of agriculture practices, and link it to market, I believe no ordinary farmer will remain poor,” said Nallos.

DAR-Kidapawan City office also links Rebleza to the metro’s organic trading post and to other local outlets. As part of the monitoring and sustainability mechanism of City-DAR, every week. the staff monitors the project, especially the new livelihood project.

Nallos added that as an okra grower, Rebleza could harvest more than 5 kilos every two days, which gives her sure income.

For organization’s sustainability mechanism, in every income, 70% will go to the organization’s fund, while 30% will be for Rebleza’s additional income.

The purpose of SBFP

According to Nallos, the goals of the project are to increase Agrarian Reform beneficiaries’ household income; increase its sugarcane production as major crop; develop new technology and high-yielding variety of sugarcane; and introduce new variety 171 that would help local farmers earn more income.

The City-DAR office’s initial support on SBFP will last two years, and after which the agrarian beneficiaries will continue the project with their own resources and gained profit.

Teach kids how to plant during the quarantine period