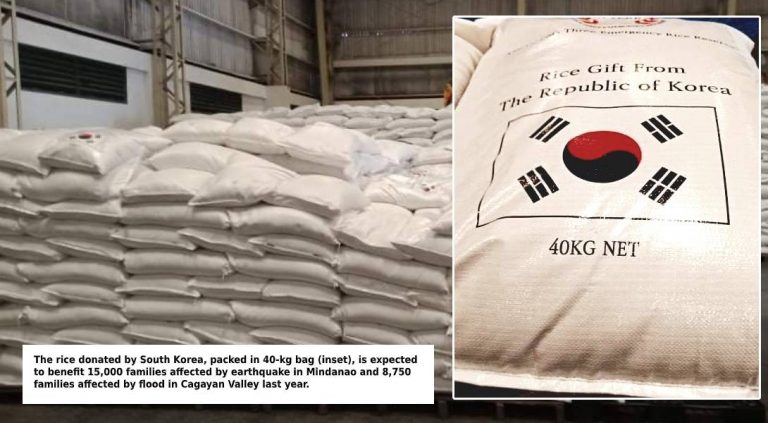 The South Korean government recently donated 950 metric tons (MT) of rice to the Philippines, particularly for the thousands of Filipino families adversely affected by natural disasters and calamities last year.

They include the earthquake victims in Mindanao, particularly in North Cotabato and Davao del Sur, and other areas in regions 11 and 12, and flood victims in Cagayan Valley last year.

“On behalf of President Rodrigo Roa Duterte, we would like to thank President Moon Jae-in and the people of the Republic of Korea for their generosity in helping our countrymen who suffered and survived a series of earthquake in Mindanao and flooding in Cagayan Valley,” said Agriculture Secretary William Dar.

The rice donation is part of the emergency food assistance of South Korea’s Ministry of Agriculture, Food and Rural Affairs (MAFRA).

In his letter to MAFRA Minister Kim Hyeon-Soo, Secretary Dar said, “South Korea’s donation is a manifestation of your country’s dependable support and concern to the Filipino people, and rest assured the rice will go beyond its initial intended purpose.”

For her part, administrator Judy Carol Dansal of the DA’s the National Food Authority (NFA) said the non-glutinous rice was shipped by the Korea Agro-Fisheries and Food Trade Corporation to the NFA as part of the ASEAN Plus Three Emergency Rice Reserve Tier 3 (APTERR Tier 3) Program.

The rice shipments arrived last March at the ports of General Santos City (600 MT) and Manila (350 MT) and temporarily kept at NFA warehouses.

The NFA is set to turn over the South Korean rice donation to the Department of Social Welfare and Development (DSWD) for distribution to affected families in Regions XI, XII, and Cagayan Valley as identified by the DSWD in coordination with the concerned LGUs, said NFA Chief Dansal, who represents the Philippines in the ASEAN emergency rice reserve initiative.

The APTERR Tier 3 is a regional cooperation mechanism involving ASEAN member countries plus the Republic of Korea, Japan and the People’s Republic of China. It aims to strengthen food security and provide emergency rice assistance to victims of natural calamities in member countries.