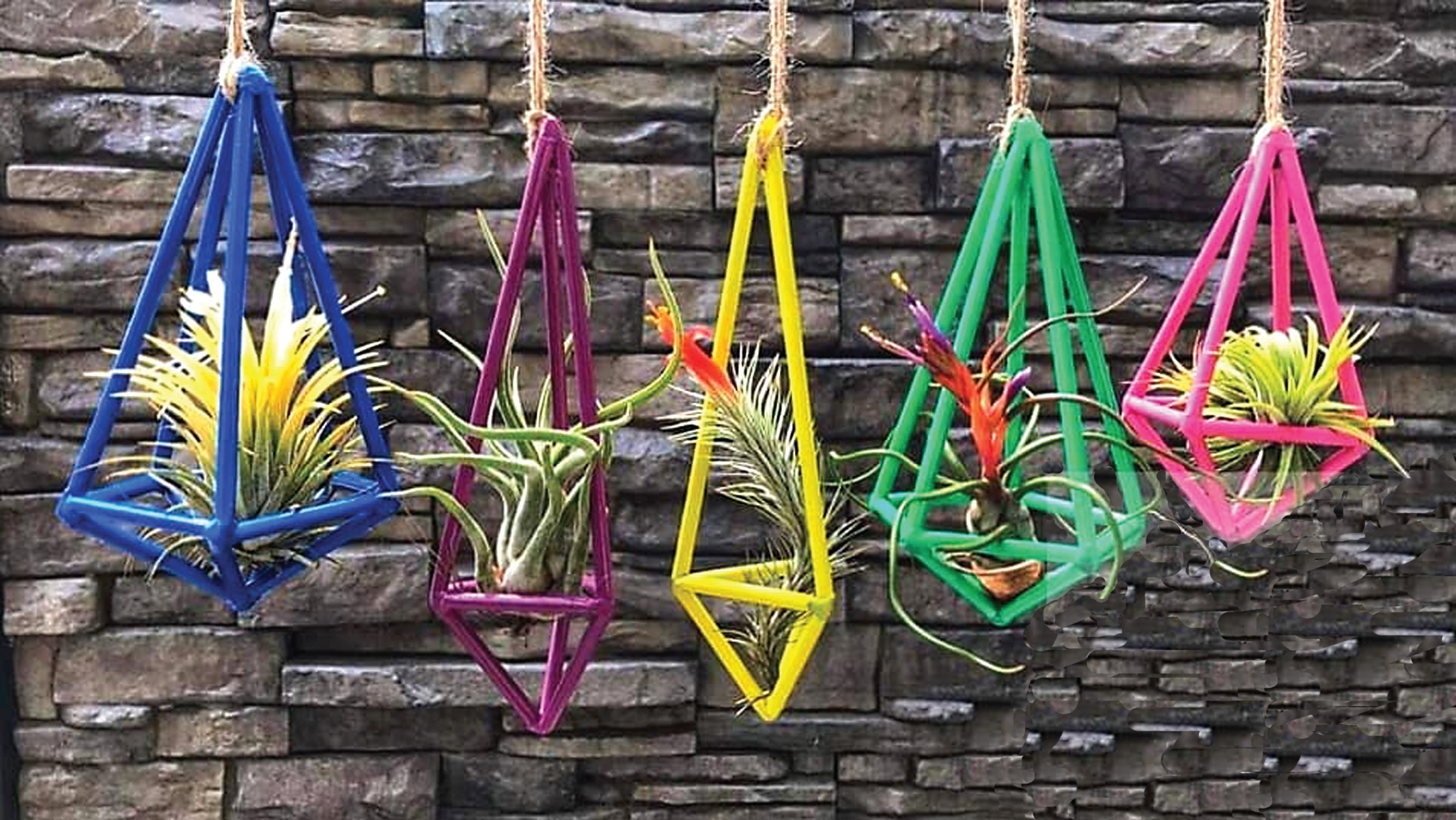 Cacti and succulents are common favorites when it comes to houseplants that many, especially those who are only beginning to show interest in plants, consider to be undemanding and easy to grow.

However, a plant grower thinks otherwise. She has found another variety that has proved to be versatile while retaining its decorative properties.

Jen Veran-dela Cruz, the owner and creator of a local plant store known as “My Piece of Earth” propagates Tillandsia, popularly known as air plants, because it can thrive well without soil. 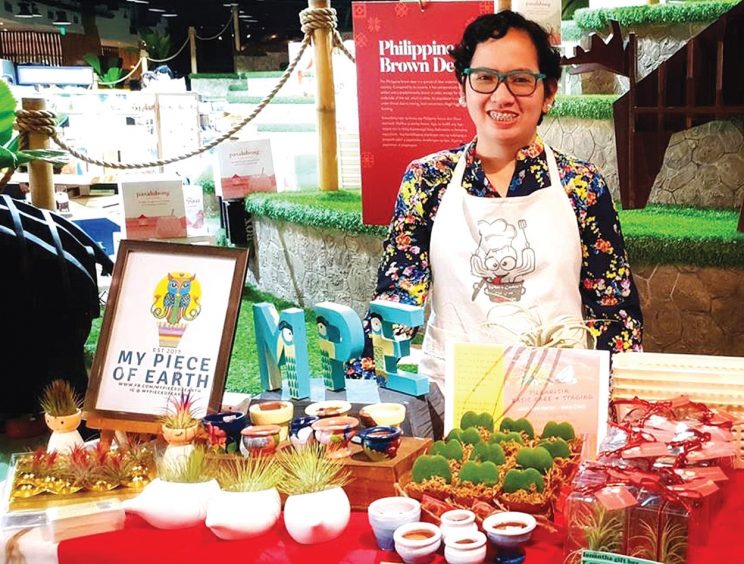 Jen Veran-dela Cruz in front of her plant collections.

“You can stick them pretty much anywhere and they’ll manage to grow without a problem–as long as you take [proper] care of them, of course,” Veran-dela Cruz said.

Air plants are members of the Bromeliad family which have adapted to rely on their leaves instead of their roots when it comes to absorbing nutrients and moisture. They thrive well in almost any climate but, like most plants, still need to be cared for.

Veran-dela Cruz sources the varieties that she propagates from sellers or bazaars in Quezon Province, Davao, Cebu, and even Singapore.

Best-selling varieties include Tillandsia cotton candy, known for its bright pink flower resembling cotton candy on a stick, and Tillandsia bulbosa which has tendrils shooting out from a thick, round base.

Established in 2017, My Little Piece of Earth started as a hobby for Veran-dela Cruz, who was a new mother at the time.

“We moved from Metro Manila to Amadeo, Cavite and I didn’t know what to do at the time. I started planting to make the most of the green surroundings in the area,” she said.

She initially started selling cacti and succulents as advised by some of her friends, but she later got hooked on Tillandsias because of their versatility and their unique characteristic of not needing soil.

Tillandsias have several differences and similarities with the usual houseplants when it comes to proper care. 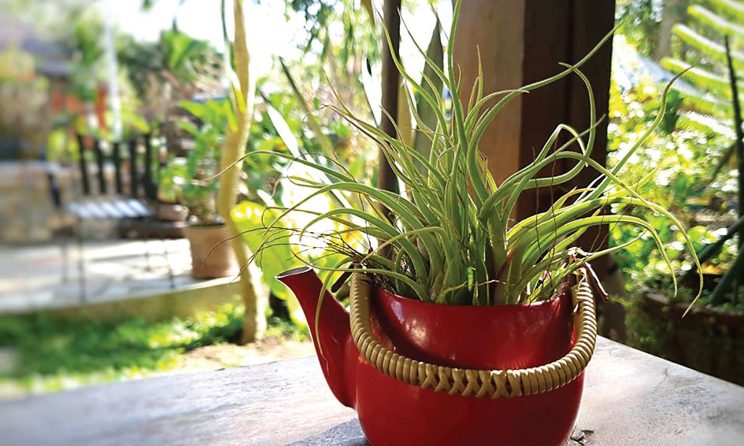 An old teapot with a telephone cord wire handle used as a pot for an air plant.

“Given that air plants don’t need soil to thrive, they still require the basic needs so they won’t deteriorate rapidly,” Veran-dela Cruz said.

Like all plants, Tillandsias need water, sunlight, and air. However, it slightly differs on how these elements are applied to the air plants.

Veran-dela Cruz advises to keep Tillandsias in spaces located near a window because they only need the bright light that comes from an early morning or late afternoon sun. Direct sunlight, on the other hand, can cause sunburn.

She added that near a window or outdoors are good spots because Tillandsias prefer moving air which comes from good ventilation.

Normally, air plants should be watered two to three times a week. However, in the summer, it needs to be watered everyday to make sure that it won’t dry out. In the meantime, once a week watering is enough to avoid drowning or root rot.

Although air plants can be handled directly without the use of gloves or other gardening tools, Veran-dela Cruz suggests, however, to avoid touching the plant as much as possible.

“Tillandsias can be held every once in a while but I suggest to not touch it every so often to let the plant grow on its own. It’s like letting a child grow; we just have to give the right amount of attention to make sure that it develops nicely,” Veran-dela Cruz said.

Veran-dela Cruz added her own twist to increase to the plants’ decorative properties. She uses bargain vessels like cups, dishes, and more from bazaars or shops as containers for the air plants she grows.

Other than buying her vessels and stands, Veran-dela Cruz has customized vases and wooden stands which are created by her close friend as well as her husband, respectively.

Veran-dela Cruz explained that a friend of hers paints some of the vases that are used in holding air plants. In the meantime, Veran-dela Cruz’s husband creates wooden stands for her plants during his free time.

“I am thankful that I have people around me who are supportive of what I do,” she said.
As a result of the affordable “potted” plants that she produces, Veran-dela Cruz sells them at a minimum of P50 for common species to P2,500 for the rarest kind that Veran-dela Cruz has on hand.

For her, this is a way for her to raise awareness about air plants and encourage more people to garden.

She encourages people to use Tillandsias as decor for their homes or personal spaces because, as most plants do, it helps purify the air and promotes well-being by alleviating and reducing stress.

Even her five-year-old daughter follows in her footsteps and cares for her own houseplants, which for Veran-dela Cruz is a step towards getting more people to be aware and care for Tillandsias.

A beginner’s guide to container gardening