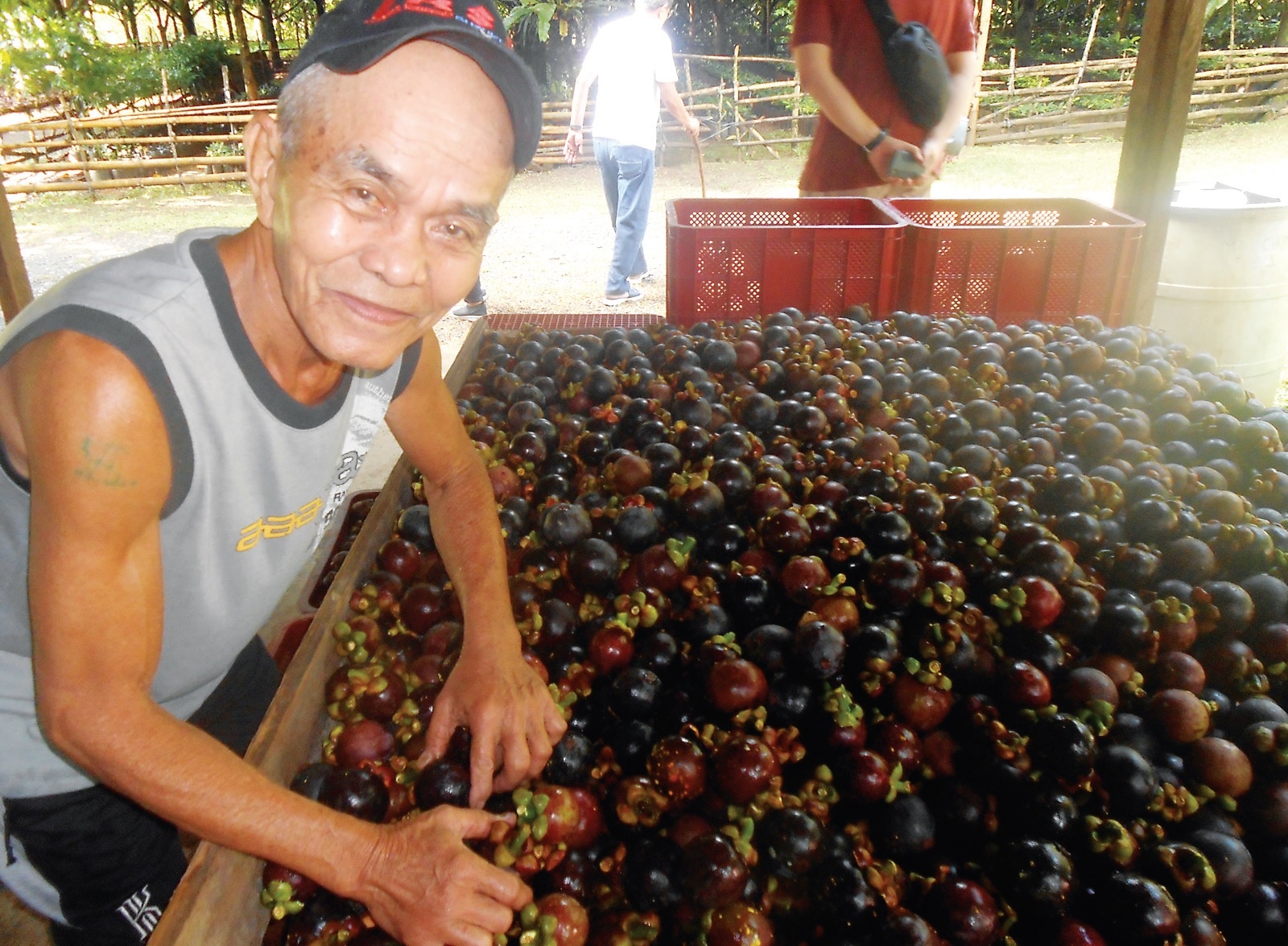 Producing mangosteen for the fresh fruit market is profitable enough, but processing the fruits, as well as the leaves and other parts of the tree, can increase income as much as three times or more.

That’s what we learned from talking to the pioneer grower, researcher, and processor of high-value mangosteen products on August 16, 2019. The fellow is Dr. Alfredo Villarico, 75, who probably has the biggest mangosteen plantation in the country today. He has two farms totalling 32 hectares in Kidapawan City, North Cotabato, and 130 hectares in Aborlan, Palawan. Fifty hectares have already been planted in Palawan, and planting is ongoing.

He said that last year (2018), he harvested 120 tons of fruits in Kidapawan. If everything were sold as fresh fruit, the gross income could easily be P6 million. But if the fruits and other parts of the tree were processed into several byproducts, the income could be easily tripled. He explained that the processed byproducts from one hectare could be worth more than the fresh fruits harvested from three hectares. Among the processed mangosteen products are capsules as a food supplement, mangosteen tea, mangosteen and coffee mix (three types), jam, mangosteen choco, and two kinds of mangosteen soap. 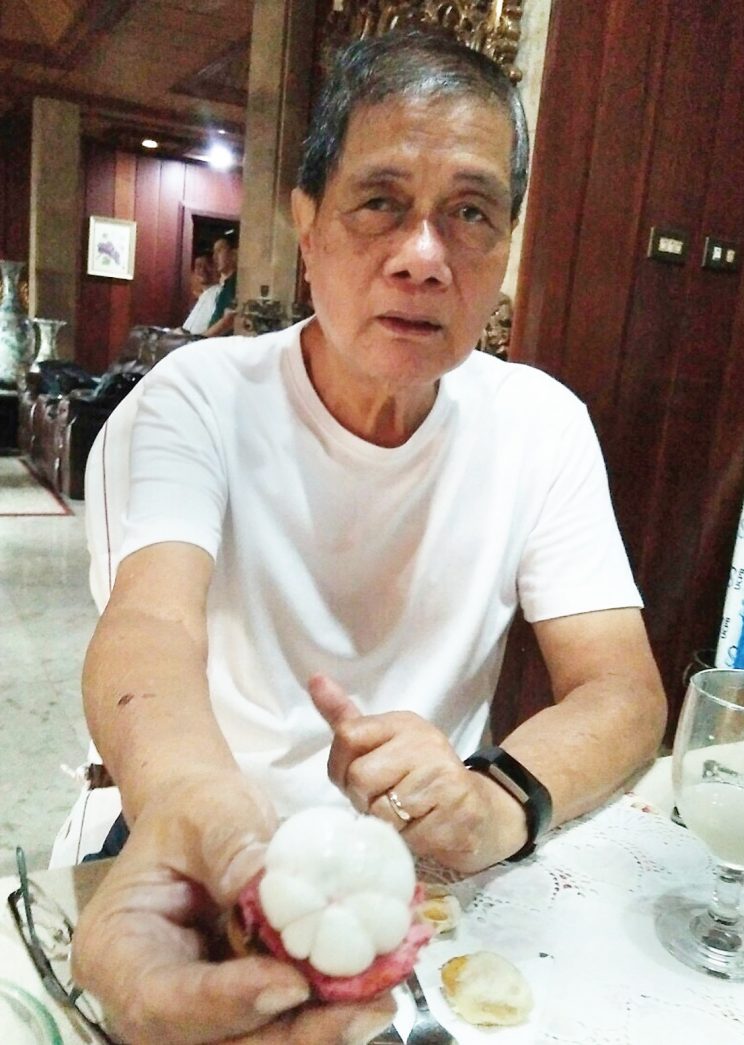 Dr. Villarico, a medical doctor, was the first in the Philippines to develop a capsule out of powdered mangosteen pericarp, which he believes has health benefits. He explained that the fruit’s pericarp, or hard shell, contains xanthone and other active ingredients that can help relieve patients of their ailments.

Dr. Villarico said that xanthone has anti-inflammatory properties. Whenever a person contracts a disease or is hurt, inflammation occurs. It is the function of xanthone to proceed to the affected area to check the inflammation. Xanthone works together with other active ingredients found in the fruit and other parts of the mangosteen tree.

Dr. Villarico’s mangosteen capsules have become very popular in Mindanao and Visayas, not only because of its high quality, but also because it is very affordable. It costs only P10 per capsule, which is virtually half the price of its counterpart in the market. Efforts are now underway to make the capsule and Dr. Alfred’s other mangosteen products available in Luzon and in the export market. Of course, the products have been exported to the United States and other places, with very good reception not only from OFWs, but also from other citizens. In the US, Dr. Villarico said, mangosteen coffee is the bestseller.

Dr. Villarico emphasizes that their raw materials are of the highest quality. Their mangosteen trees are practically grown the organic way. They don’t use any chemical fertilizer and pesticides to prevent disease and insect infestation.

Dr. Villarico started planting mangosteen in 1981, when he was already a 37-year-old medical doctor. His fellow doctors were laughing at him for planting mangosteen because they believed that mangosteen would only start fruiting 25 years from planting. He was able to debunk that myth because he had proven in his farm that mangosteen can bare fruit as early as six years from planting. He advises, however, that it is best to plant seedlings that have attained a height of at least two feet. That way, they will not be easily overtaken by weeds.

Dr. Villarico also does not believe in grafting mangosteen. Grafted trees are usually weak and stunted, he said. The seedling trees, on the other hand, grow tall and produce a lot of lateral branches that bear the fruits.

The trick, he said, is to remove or prune the small branches inside the canopy. Fruits are produced at the tip of the lateral branches, so there is no need for the small twigs inside. Pruning the inside branches will also result in better ventilation that is beneficial to the trees. 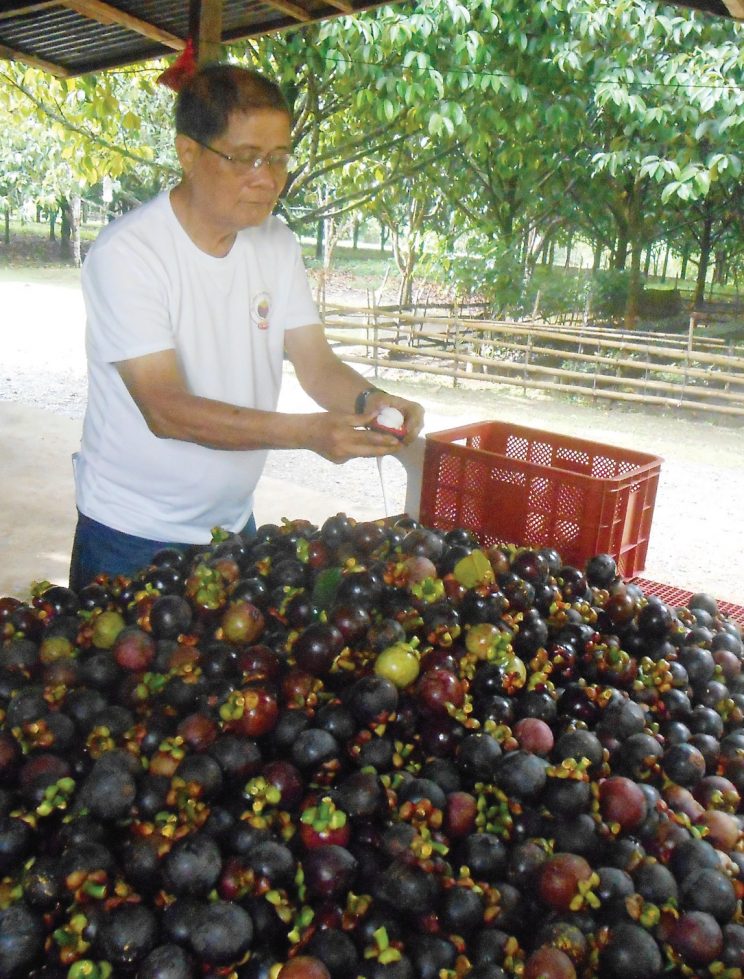 Dr. Villarico and a pile of newly-harvested fruits.

Compared to other fruit trees, mangosteen has a much longer productive life. He cited an old mangosteen tree that he saw in Thailand which was already a century old and was still bearing fruit. In the beginning, he also planted durian and rambutan in his farm, but he eventually got rid of them because their life span is shorter and they require  a lot of pesticides to protect them from pests and diseases.

One other reason why Dr. Villarico loves mangosteen is that the fruit has a long shelf life. It can be kept for15 to 20 days without spoiling. And even if insects attempt to puncture the pericarp, the aril or white flesh inside is not damaged. The pericarp is just too tough for insects to puncture.

Dr. Villarico is very happy to share that many of the farmers in Kidapawan have followed suit in planting mangosteen. They are making good income from their trees, which require just minimal inputs, he said.

Dr. Villarico is no longer practicing his medical profession. He has put up a hospital which is now managed by his eldest daughter, who is also a medical doctor. His son, Alfred, is also a physician who is into sports medicine. His daughter Dianne, who is a lawyer, takes care of legal matters and will soon involve herself in expanded marketing initiatives.

A new multi-million processing plant is being constructed right on his mangosteen farm. That’s a sure sign of his belief in the health benefits of mangosteen. We know of no other farmer who has a bigger mangosteen plantation than Dr. Villarico and who has more extensive hands-on experience in growing the fruit tree, and in processing its high-value byproducts. And that’s why it can be said that he is the Mangosteen King who is forever in love with the Queen of Philippine fruits – the mangosteen.

Fruits as the new leather: vegan leather made of mangoes will be launched by a designer brand