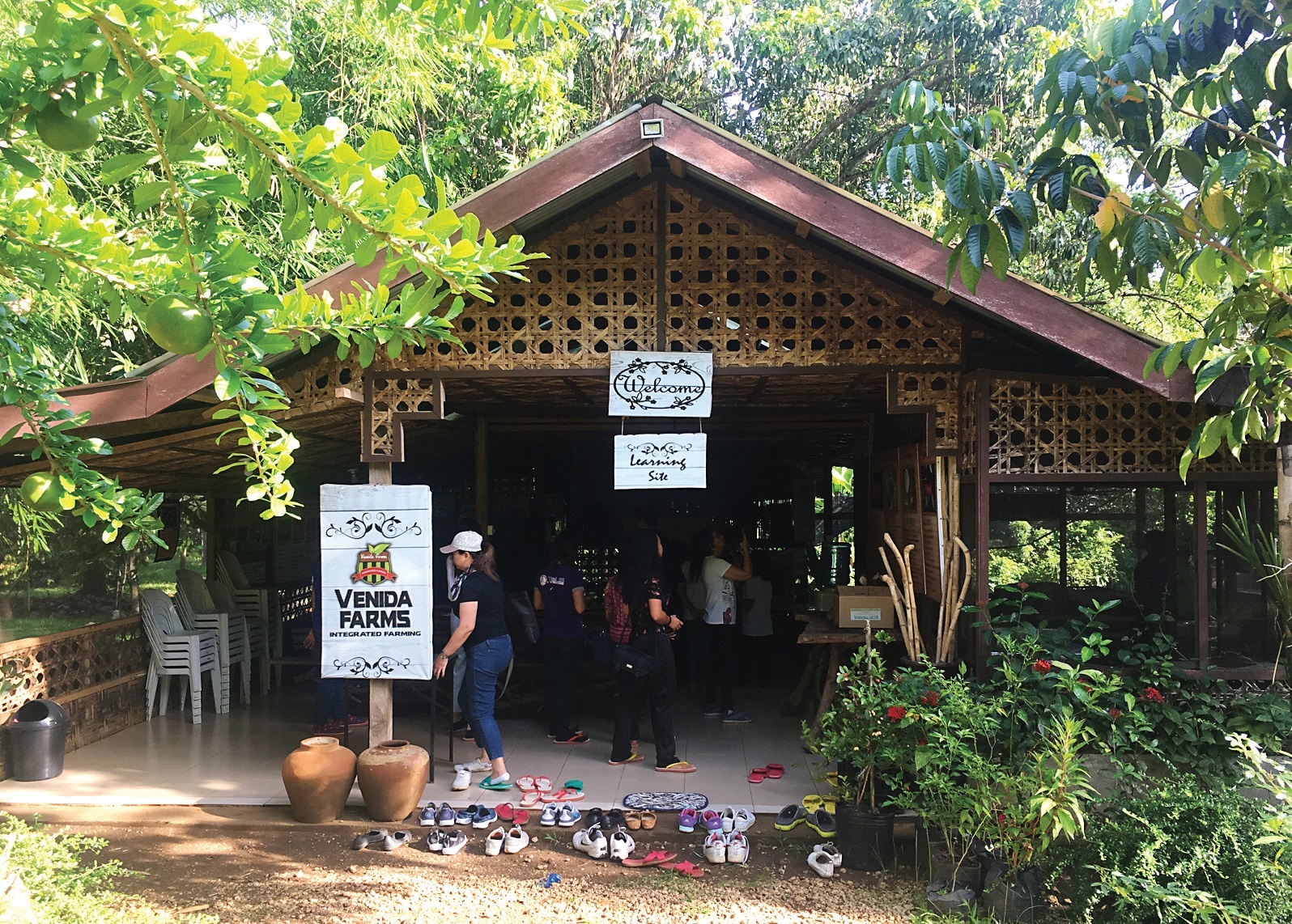 The farm’s main structure is a stylish open-air hut where training sessions are held and meals are taken.

Venida Farms, located within the Iligan City limits, is technically an urban farm, though it’s easy to forget that once you’re inside. The farm is just a few minutes drive from the city center. You’ll know that you’ve reached Venida Farms by the calabash trees (Crescentia cujete) outside. Also called ‘miracle fruit,’ calabash has many health benefits, including phytochemicals that may contribute to decrease in blood sugar levels. It is also currently being studied for its potential anti-cancer properties.

These, as well as coconut trees and orchids growing from coconut husks, line a grassy path that lead towards a sturdy wooden hut on which the signs, ‘Venida Farms,’ ‘Welcome,’ and ‘Learning Site’ are hung.

The farm is owned by Roger Lacida, who named it after his mother’s nickname. “Her name is Bienvenida, which means ‘welcome.’ She really had a passion (for farming). Since we were little, she’s the one that injected this ‘disease’ into us, the passion for plants and livestock,” he says. 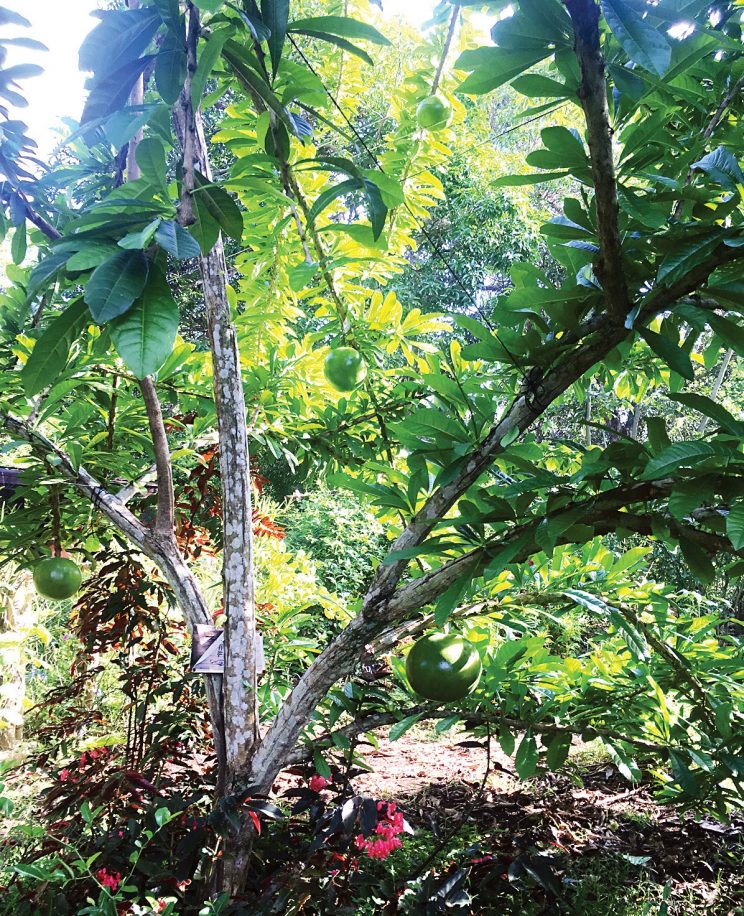 One of the plants that Lacida advocates the cultivation of is the calabash tree, also called the ‘miracle plant’ because of its many health benefits.

Lacida has always had a green thumb. He recounts that around the age of five, he was given a small plot of land to care for, where he planted calamansi. “That’s how it all started,” he says. “But our house was full of livestock and plants because we were (one of) the first settlers in the province.”

Lacida and his three siblings grew up on the three plus hectares that comprises the farm and the family residence. He was entrusted with the farm in 1984. Ten years later, he returned to survey the area and plant coconut and fruit trees. He didn’t start farming in earnest until 2009, when he retired from his businesses in the real estate and hotel and restaurant industries in the U.S.A. to return home to look after his widowed father who lived on the farm.

When he arrived, he was in for a nasty shock. Only a fourth of the trees planted in 1994 were left; the rest were cut down by the property’s caretakers who mistook unfamiliar trees like lychee as weeds. “I started to rehabilitate the farm,” he says. “I added a lot of livestock, different fruit trees like cranberry and bignay, and a lot of indigenous plants.”

Even though he had an interest in farming, Lacida didn’t have a background in agriculture. He made up for this by attending training seminars in the Department of Agriculture’s Agricultural Training Institute (ATI) and subscribing to Agriculture magazine. “I read it religiously. I absorbed it and practiced it and applied (what I read), because I didn’t have knowledge of farming. I didn’t go to any university for agriculture. I just learned it from magazines and training.”

The farm has been following organic farming practices since it opened in 2012, and is also an ATI learning site, where people can learn techniques on plant cultivation, livestock raising, and running a farm. It is also a leisure farm where guests can relax and bask in Mother nature’s bounty and ambiance.

Guests are greeted with a shot of miracle fruit juice. Lacida says he takes a shot every morning and it’s helped him keep in top shape.

The open-air hut where the training sessions take place is surrounded by lush greenery; the main dining area is located in between the kitchen and a small fishpond, with a sign that says “ka-on ta” inviting everyone to dig in.

The farm spreads outwards from the hut, with guests encouraged to see what the land can offer. There are numerous kinds of fruit-bearing trees, including, but not limited to mango, durian, rambutan, lanzones, and makopa.

The farm cannot accommodate overnight guests yet (guest lodges are still being built), but it can cater to daytrippers, offering dishes made from ingredients fresh from the farm and the nearby market. A colorful salad that includes lettuce, dragonfruit, cherry tomatoes, pomelo, and ternate flowers showcases the farm’s produce, while dishes like prawns, adobo, fried eggplant, and salted egg and tomato salad provide a comforting meal.

“The dragonfruit we have is different. It’s from Australia, the best kind in the world,” he says. That’s what my passion is – to have something different here.” 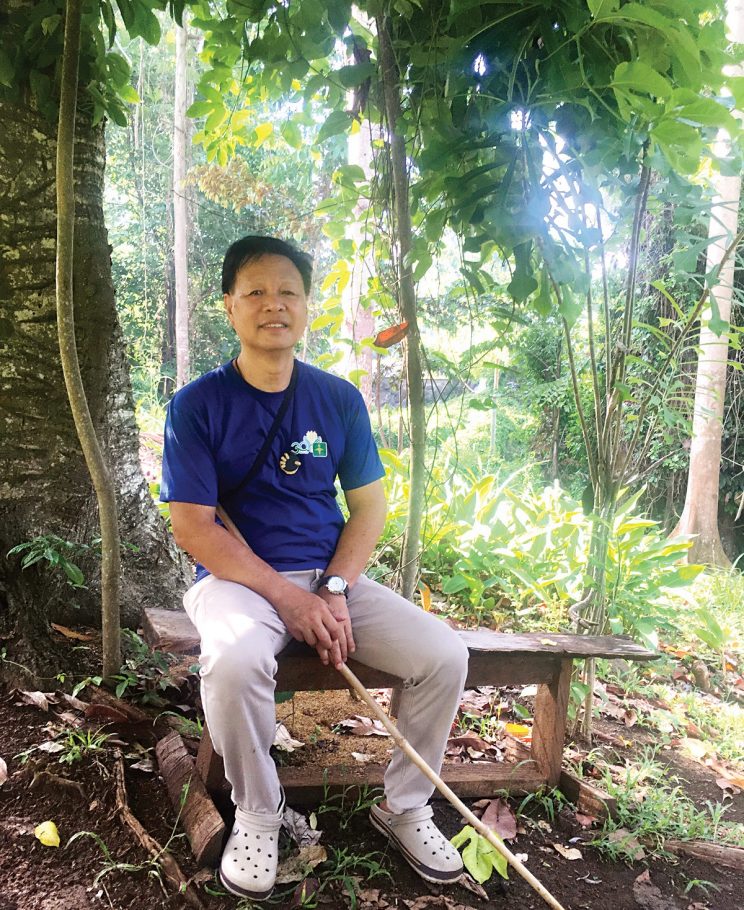 Roger Lacida is a successful farmer who left his businesses in the USA to farm in Iligan City in Lanao del Norte.

Lacida has a passion for the unique. He’s always searching for plants and developing products that can help his farm stand out. An example of this is his cultivation of the Bengal currant (Carissa carandas), known locally as cranberry. The plant’s thorny bushes double as a perimeter fence. Its berries can be processed into juice, jam, and wine (their cranberry wine is consistently sold out), and seedlings can be sold to farmers who want to propagate the shrub themselves. “I sell planting materials to farmers who want to propagate it. They will grow it for two years, and after it bears fruit, we will buy the produce from them at P30-R50 a kilo. They have an instant market.”

Lacida estimates that he’s made millions on the cranberries and its value-added products alone. “In the seedlings alone, I have already earned more than a million in less than two years. That’s a lot of money for a farmer. The seedlings, plus the fruits, you can sell or you can process, that’s income. A lot of income already plus you’re protected with the fence,” he says.

Value-adding, or developing products from what the farm produces, can be an important part of keeping a farm’s finances in the black. It takes a crop’s surplus and turns it into other products that can be purchased, adding to the farm’s sources of income.

Aside from cranberry, Lacida has also developed juices from blue ternate flowers, lemongrass, passionfruit, and santol. Taking advantage of his farm’s past as a coconut plantation, he has also ventured into products such as virgin coconut oil, coconut honey, and coco sugar, coco vinegar and is looking into coconut-based skincare products. “We are not making an income that we enjoy so much, but every income that we make, we invest again here. Everything, the profit that we make, we infuse it back to the farm,” he says.

Venida Farms’ success wasn’t instant. Lacida shares that, like in any business, there were challenges that needed to be overcome. First is the need to make money. “(This is) very difficult to sustain when you’re financially low,” he says.

Second is the challenge of finding and keeping good employees who work well together, especially in an industry where the income fluctuation is a given. “Individual differences are always there and we have attitude problems,” Lacida says.

It is important to set a good example to one’s employees, as well as expose them with the values of the culture one wants to cultivate in the farm. “What we do today is we introduce them and teach them values to keep them intact,” Lacida says. “Now, we’ve been united because we try to infuse them with values and how to behave and act. That’s what keeps us united in the farm.”

Everyone’s hard work has borne fruit. The farm is a three-time Outstanding Coconut Farmer Regional winner. While Lacida and his team worked hard for the honors, he credits his success to God. “The (best part about farming is the) peace, and to be a partaker in God’s creation. You see the metamorphosis of a certain plant, fish, or animal how He had sustained them, (and) you’re part of it,” he says.

“I think it’s basically God’s mercy and grace that sustains us. We are operating by faith. We don’t have much capital. We just depend on the Lord on a daily basis. We just pray for deliverance that we are safe here, that our needs are provided for. We depend on the Lord for everything.”

Dragon fruit is a favorite commodity in the Palarca Tourism Farm