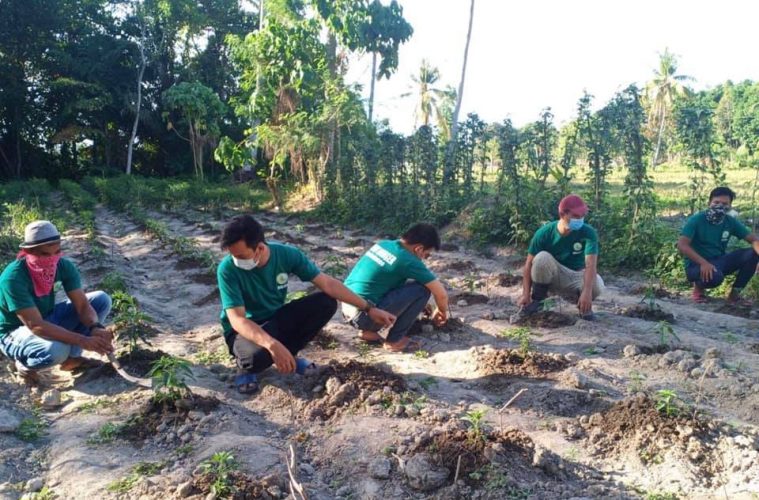 BARMM-supplied photo shows some “palaw rangers” tending a “survival garden” in a forestland in Maguindanao.

“This is humble contribution to what our infant region can do for our government in its stride to sustain food security and feed the nation in our current state of emergency,” BARMM Executive Secretary and MENRE Minister Abdulraof Macacua said of the “survival gardening.”

Macacua, in a statement on April 20, said that a memorandum order was issued on April 6 directing regional, provincial, and other MENRE field offices to cultivate open forestlands into “survival gardens” during and beyond the period of coronavirus (COVID-19) pandemic.

He considered the venture as two-pronged because it would provide additional income for “Palaw” rangers on one hand, and magnify food supplies on the other.

“Palaw” rangers are BARMM’s substitutes to forest rangers employed by the government to protect forests in their own localities. “Palaw” literally means forest in Maranao and Maguindanaon vernaculars.

“This survival gardening will serve as another source of food for our constituents and other Filipinos. It will help ease possible shortage in food supply in a prolonged state o community lockdowns,” Macacua said.

“It is pursuant to the provisions of Republic Act No. 11469, otherwise known as the ‘Bayanihan to Heal as One Act’,” he added, noting that, “survival gardening” is carried out in places deemed by authorities safe to implement it.

While MENRE field personnel are determining areas in BARMM suitable for the venture, “Palaw” rangers had already opened “survival gardens” in parts of Maguindanao forestlands after the release of the April 6 memo order, Macacua said.

He said the MENRE gives priority to forest-dependent communities where access to water is available for watering of vegetables, rood crops, and other fast-harvestable plants.

BARMM’s Ministry of Agriculture, Fisheries and Agrarian Reform (MAFAR) is supplying the necessary seedlings as well as technology in the MENRE’s “survival gardens,” Macacua said as he lauded the MAFAR support.

MAFAR first introduced “survival gardening” in backyards last month, but the lack of ample spaces prompted the MENRE to come in with the use of vast open forestlands in the region, he said. (Photo courtesy of BARMM)