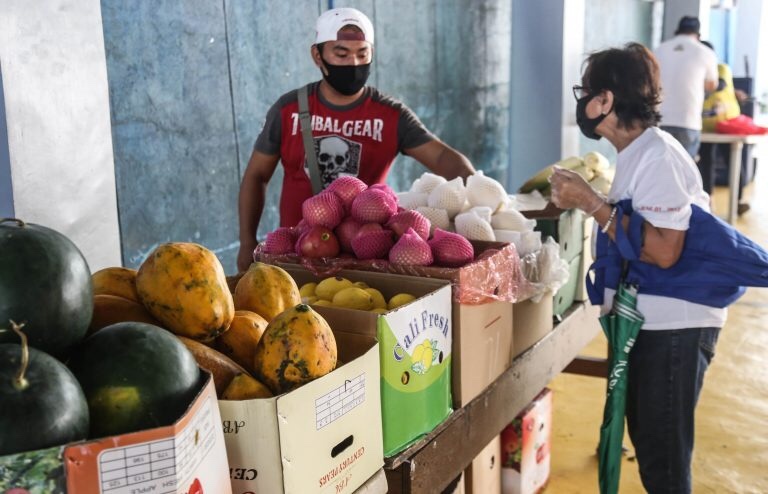 The Department of Agriculture (DA) and the Department of Trade and Industry (DTI) launched a joint market intervention called the ‘Kadiwa Diskwento Karavan,’ serving hundreds of families at Greenheights Gym, in Barangay Nangka, Marikina City, on April 21, 2020.

The combined DA’s Kadiwa ni Ani at Kita and DTI’s Diskwento Karavan seeks to bring a variety of affordable basic commodities — from vegetables, fruits, fish, chicken, to sardines, canned meat products, to laundry detergents, among others — closer to urban families affected by the enhanced community quarantine (ECQ) due to the Covid-19 pandemic.

“Once again, we thank DTI Secretary Ramon Lopez for partnering with the DA for bringing together fresh agri-fishery produce and manufactured goods through the ‘Kadiwa Diskwento Karavan’,” he added.

The partnership between the DA and DTI was forged last week during a meeting of the sub-group on food and water security of the Inter-Agency Task Force for the Management of Emerging Infectious Diseases (IATF-EID). It was recently elevated into the Task Group on Food Security, also chaired by the DA, serving as the fifth task group under the IATF.

The Kadiwa Diskwento Karavan aims to serve as a ‘mini’ grocery that will sell agri-fishery and canned and processed products, and other basic necessities at cheaper rates than the suggested retail prices — as it eliminates middlemen by directly linking farmers and food manufacturers to consumers.

The DA, DTI and Department of Social Welfare and Development (DSWD) also reached an agreement whereby the DA will deploy Kadiwa Diskwento Karavan rolling stores in areas where the DSWD will distribute the Social Amelioration Program cash grants to beneficiaries to enable them buy readily their needed food requirements instead of being spent for other non-essentials.

The DA-DTI Kadiwa Diskwento Karavan will be deployed in other areas in Metro Manila in succeeding days, in tandem with the DSWD and concerned LGUs.

Food vehicles should only have three personnel