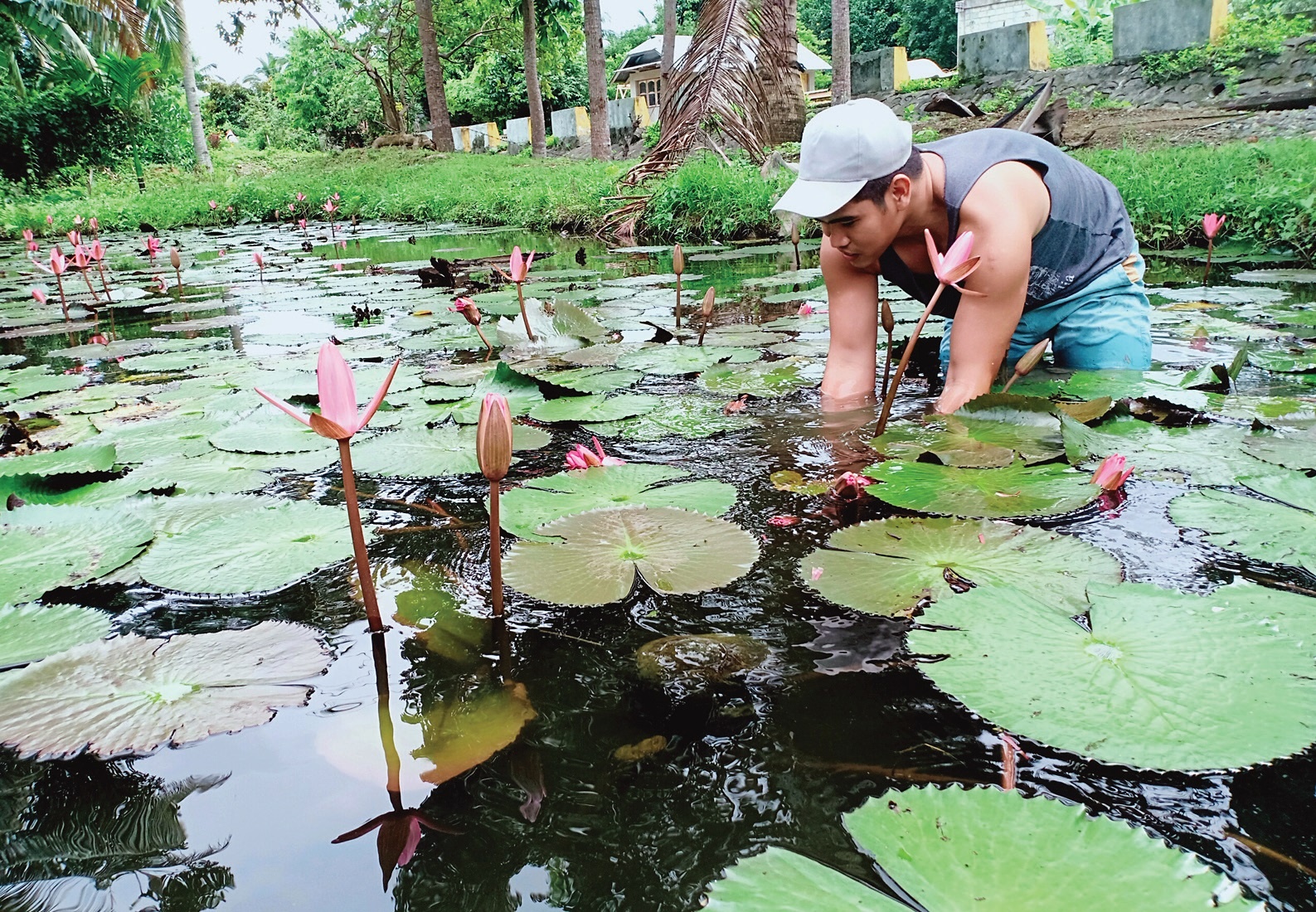 Edible plants aren’t just for filling one’s bellies. As Harold Bueno, 29, found out, plants can be a link to one’s past as well.

Bueno is a Hospitality and Tourism Management instructor in Far Eastern University who is currently taking his PhD in Taylor’s University in Malaysia in Tourism and Hospitality, focusing on farm-to-table tourism. He is also president of Slow Food Youth Network Philippines, the young arm of the international organization that advocates the preservation of local food cultures and traditions.

His first inkling that plants could be a link to his family’s past came when he was looking through family recipes that used indigenous plants that were common in his hometown of Cubiao, Nueva Ecija, but were not readily available in the local market. He discovered other inidgenous plant ingredients by listening to his elders talk about their past. “In the province, at siesta time, they will sit under the mango tree or inside the kubo and reminisce, like, ‘This is what we ate when we were kids,’ or ‘These are the recipes that we miss.’”

Bueno’s grandmother died when her children were in high school, so they all miss her cooking. By making the recipes, complete with the indigenous ingredients, not only was Bueno finding out about his grandmother’s cooking style, he would also be reviving her memory.

Three indigenous ingredients and how to cook them

Bueno shares three indigenous plants and how they can be prepared.

The elephant foot yam (Amorphophallus campanulatus), locally called pungapong, is a tuber that grows in shady areas during the rainy season, starting July or August. It’s leaves and stalks are edible, though it’s the latter that is most commonly used. Bueno’s family sautees the leaves with onions, garlic, and dried tuyo and cooks the stems with coconut cream, laing-style. When cooked this way, it tastes similar to laing as well. Bueno has read that its flowers are also edible, though they haven’t tried cooking with it yet. He adds that the stalks have to be harvested within two weeks of the flower blooming or else they will be hard to cook. “What I plan is to get some of it, try to cook it, and then have my titos and titas taste it until I find the exact recipe,” he says. 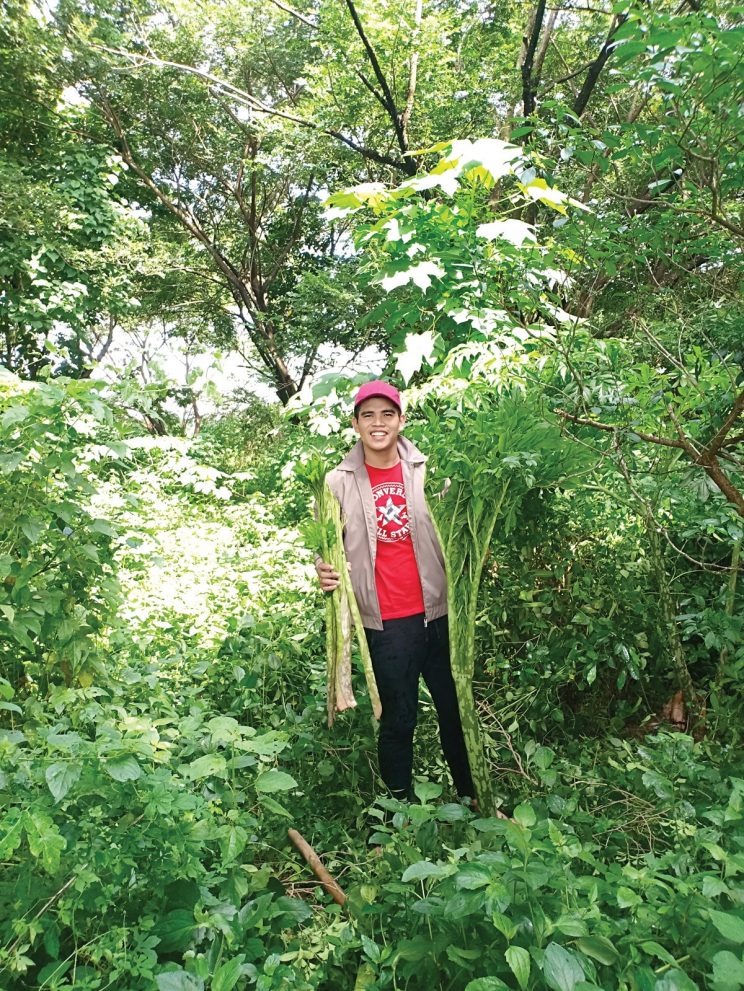 Then there is tukal (Nelumbo nucifera), or lotus. “I was trying to search for it on the internet.

Pungapong is quite common because even Doreen Fernandez acknowledged it as one of the indigenous ingredients, but based on my research, tukal is only used in Nueva Ecija,” Bueno says. He adds that the pink lotus used to be common in their area when his aunts and uncles were young, but now, it’s mainly used for landscaping, or in fish ponds to encourage the growth of beneficial microorganisms. The stems of the flowers (not the leaves) are edible, and is used the same way one uses malunggay. “We really like sauteing vegetables with tuyo,” Bueno says. “It tastes and has the texture of like soft, seedless sitao (string bean).”

The third is a local sampaloc, or tamarind, which Bueno says is commonly used in the province. “It’s a small variety of sampaloc,” he says. “I will try to coordinate with somebody in UPLB to find out what kind of variety is this… It’s used in the same way as regular sampaloc… They use its leaves (not the fruit) in sinigang.”

He adds that a portion of the leaves are reddish, and they can be hard to find nowadays because people keep taking its leaves, which stunts the tree’s growth.

The link between crops, culture, and potential cash

Discovering these forgotten plants has meant more than just the revival of Bueno’s family recipes. “It may appear simple, but when you look at it, it;s reviving the indigenous ingredients in your community,” he says. “I realized that I can contribute to my lola, my family, by restoring these recipes.”

He adds that by reviving forgotten recipes, one also rediscovers indigenous vegetables, herbs, and fruits that, though they may be scarce in the market, are really not difficult to grow and cultivate. “If pugapong (and tukal) can grow easily, why not maximize it? They don’t need pesticide. We don’t need to put anything on it. It will grow on its own. There won’t be much effort (needed),” Bueno says. “We have these available plants and vegetables that we can use that won’t be expensive. You can save money because it grows everywhere.”

Using indigenous vegetables in everyday dishes is also a way of helping the country become food secure. “If we plant on our own, especially these indigenous vegetables, it will lessen the demand, and there’s no need for the farmers to force the land with all these chemicals and pesticides, to provide for us because we can provide at least a portion of our daily consumption.” 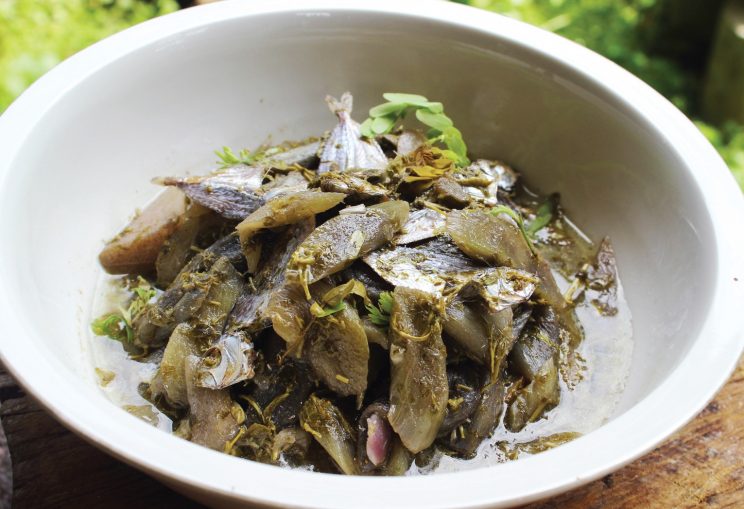 He adds that realistically, it would be difficult to be completely self-sufficient, but every little bit of agricultural independence helps. “It becomes complicated in the city. You have no land… but there are a lot of vegetables that can grow on their own. Malunggay will grow if you plant it in a pot. Alugbati will grow on its own. Pandan is easy to grow,” he says. “People think that it’s complicated to plant your own food. It’s definitely not. It’s just finding the right plant to plant.”

Recreating his grandmother’s recipes has given Bueno an insight into the psyche of a beloved matriarch he has never met. “Because of these recipes, I saw how she thinks, how practical she is, how she maximizes everything. I saw her personality in the kitchen, how she can use whatever is available in her environment. That’s how I connect with her,” he says.

The project has also helped him remember that once upon a time, he used to want to become a farmer. He used to plant gabi, kamote, patola, and saluyot, which he would sell to neighbors and schoolmates. His parents discouraged him from going into agriculture, and so he found himself in the academe. However, he continued to be drawn to the land, cultivating ornamental plants in the city. He is proud of his agricultural roots. “It’s in my genes,” he says. “Until now, my uncles are farmers, they toil on their own land.” 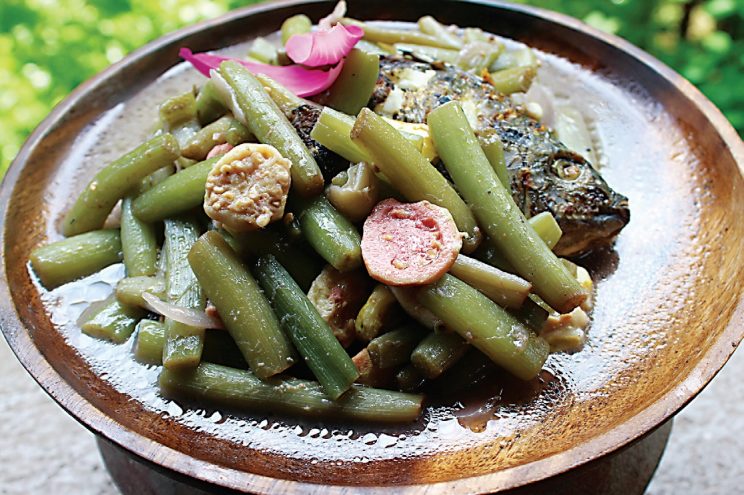 Bueno’s academic background has helped him in his advocacy of connecting the dots between food security and food systems, with a focus on farm-to-table tourism, which includes encouraging people to use indigenous recipes in tourism endeavors as a way to preserve culture. “Why not use tourism as a platform to educate everyone?” he says.

He also has his grandmother to thank. Her recipes have given him a glimpse of the past, and shown him a way to help preserve our country’s-or even just his family’s-food future.

Farmers, fishers to get social amelioration from DA, DSWD

DA Chief: We have enough food, amid extended ECQ