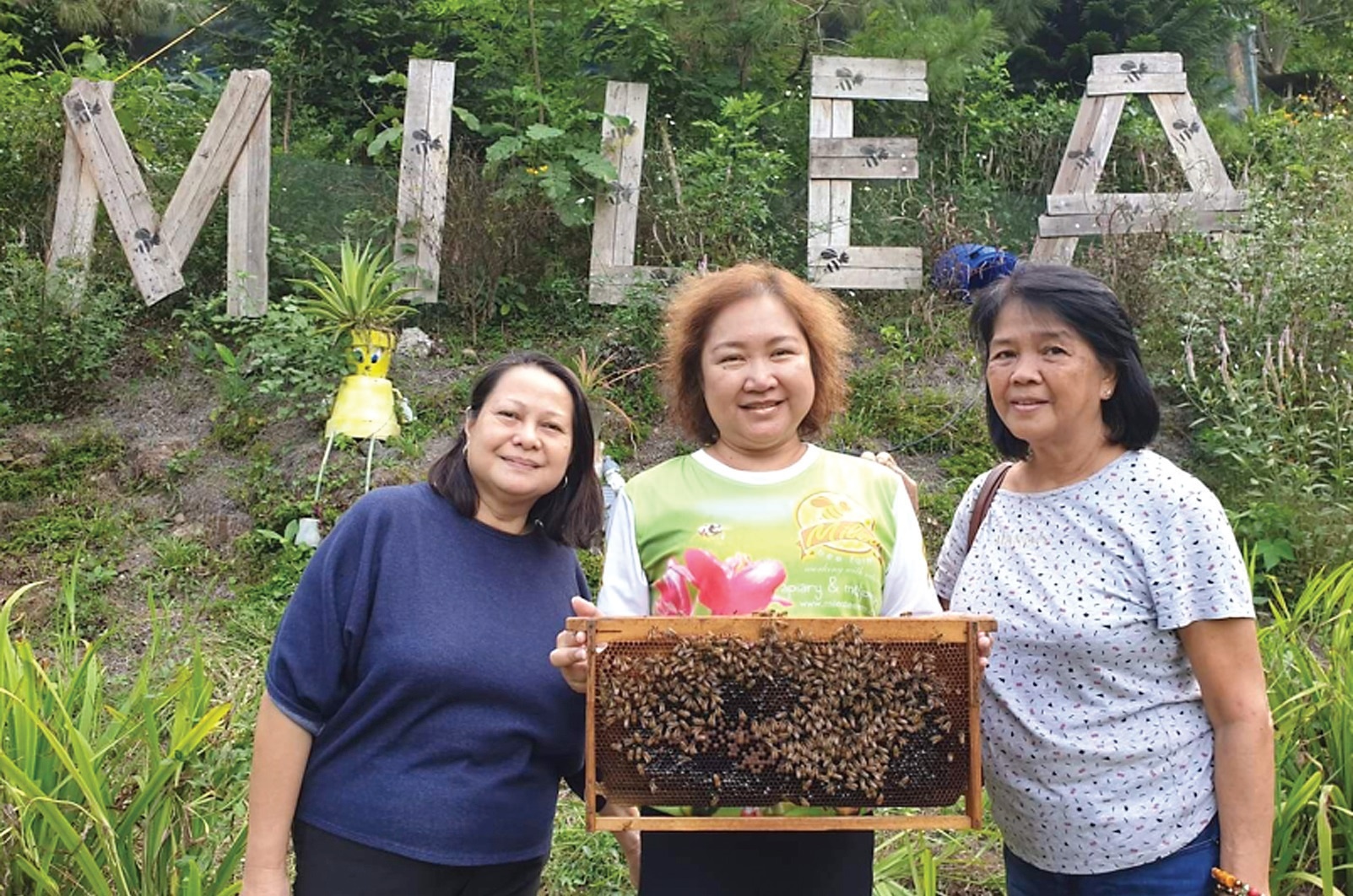 Despite the discovery of making hives for honey bees in the middle of the 1800s by an American pastor and beekeeper who invented the modern beehive that made beekeeping an industry, modern beekeeping of Italian honey bees (Apis mellifera) was only introduced in the Philippines by the Americans in 1913. Because of honey’s great potential, some Filipino entrepreneurs ventured into beekeeping using foreign honeybees.

Banking on experience, local beekeepers tried collecting honey of our indigenous species like Apis cerana (laywan) that is closely related to the Italian honey bee that builds multiple combs. However, native honey bees are very aggressive, prolific swarmers, and abscond easily, and they store little surplus honey of about one to 10 kilos per colony.

In contrast, the foreign Apis mellifera is less aggressive, swarms slowly, stores up surplus honey 20 to 100 kilos, and keeps up to 60,000 worker bees in one colony. Since then, the European honey bee (Apis mellifera), whose queen can lay 1,000 eggs per day, has been a popular choice for local commercial beekeeping. 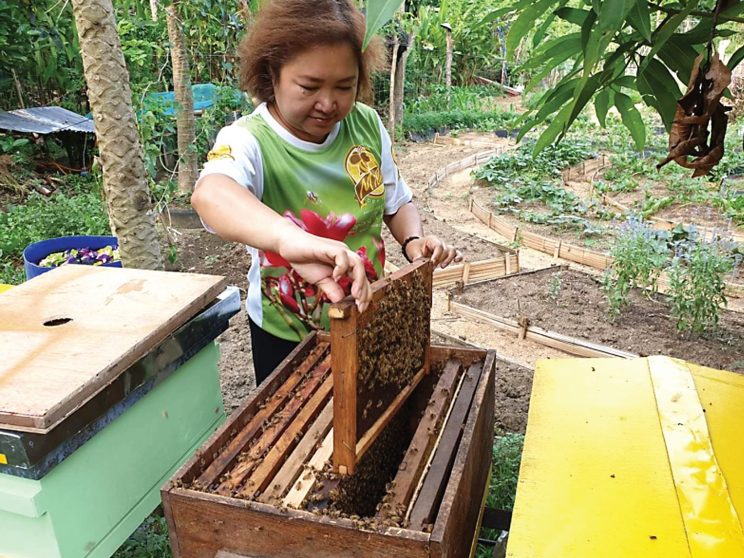 Apis mellifera is an essential cog in the behemoth machinery of the agricultural industry. Unlike many bee species, Apis mellifera pollinates hundreds of different plant species. Two hundred thousand plant species rely on bee pollination. Bees are important to us because approximately one third of our diet comes from plants that rely on honey bee pollination. If there are no bees, there would be global mass hunger. That’s how important they are.

Honeybees are probably one, if not the most-organized living creatures on earth. They produce the nutritious golden juice called honey which poets describe as the “elixir of life.” Honey is a sweet, viscous food substance produced by bees. They produced honey from the sugary secretion of plants (floral nectar). Bees store honey in wax structures called a honeycomb. Honey is collected from wild bee colonies in the wild or from hives of domesticated bees, a practice known as apiculture.

To check the purity of honey, fill a glass with water, then add one tablespoon of honey into the glass. Artificial or fake honey will dissolve in the water, while pure honey will settle right at the bottom of the glass.

Honey is used mainly in the Philippines as a health food and a base for cough syrups and energy drinks. Pollen and royal jelly, meanwhile, are used as ingredients in energy pills. Bee products are also used in beautifying agents by cosmetics companies.

Beauty expert Edilee Rosales Omoyon retired early from her lofty position in a multinational company, which is the world’s leading direct seller of cosmetics and skincare products, to develop her own line of personal care goods using bee decoctions and natural ingredients, which she herself formulated.

Edilee was dead set on making her own organic, all natural line of cosmetic products. The problem is, one of its vital ingredients is honey, and she claims that about 70 per cent of those sold in supermarkets are fake. Either they are made from a cooked sugar and water solution or are honey from bees fed with sugar syrup. 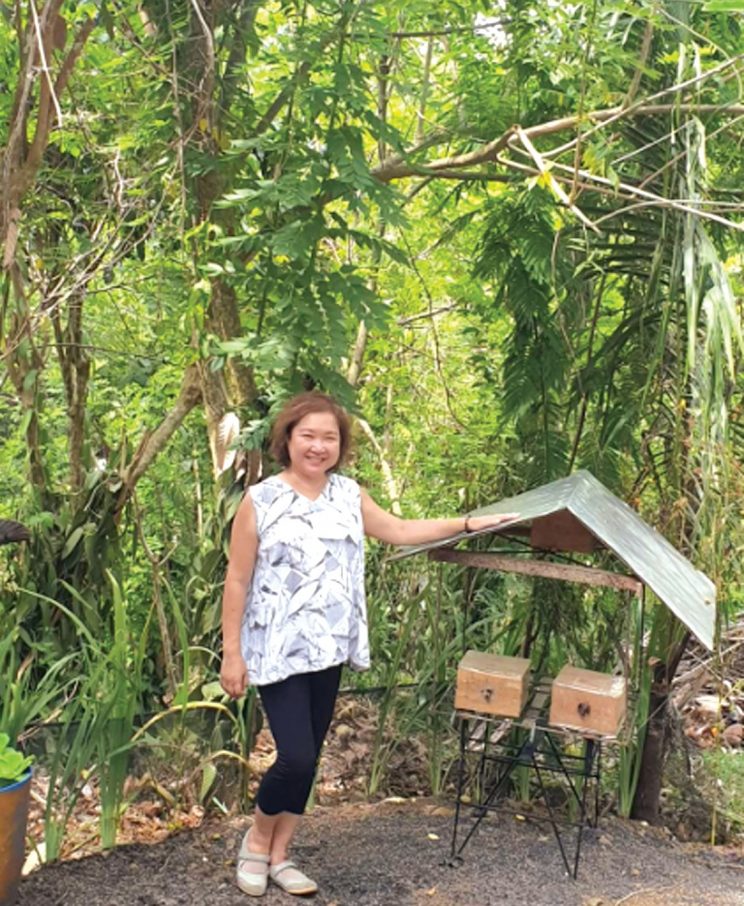 Omoyon beside her stingless bee hive.

To solve this problem, she enrolled in a one-week course on beekeeping, or apiculture, at the University of the Philippines Los Baños so she could produce her own pure honey. In 2010, she opened Milea, her bee farm on a lush hillside at the end of a winding road in Barangay Balagtasin in San Juan, Batangas.

Soon, her one-hectare hillside orchard was abuzz with thousands of Italian honey bees (Apis Millifera), one of the more popular bee strains that are very prolific, resistant to diseases, and excellent comb builders. It is golden in color, with their abdomen striped yellow and brown. Its hairy head make their large compound eyes appear ringed with hair.

One colony of Italian honey bee, consisting of 20,000 individuals—a queen, drones, and workers—can produce 30-90 kilos of honey per colony. Studies conducted locally show that honeybee pollination increases crop yield by up to 40 per cent. Cereal crops like corn, and plants such as banana, mango, coconut, coffee, cacao, citrus, peanuts, monggo, tomato, eggplant, etc. are favorite of honeybees. In contrast, the stingless bee produces from 300 grams up to one kilogram of honey per colony.

Honey is nature’s perfect food. It never spoils. It needs no processing or refining. It is the only food produced by an insect that is consumed by humans, and it contains essential enzymes, vitamins, and minerals. Honey can also strengthen bones, kill microbes in the intestines, boost our immune system, and has a low glycemic index, making it a perfect sweetener for diabetics.

“The reason why the Philippines has low fruit production is because we kill bees (when harvesting honey in the traditional way), not knowing they are good for pollination,” says the 54-year-old Edilee, a mother of three children – Milette, a digital marketing specialist for an Australian firm, Bettina, who is taking up a masteral degree at the University of Asia and the Pacific, and her only son, Patrick, a senior high in Mapua. 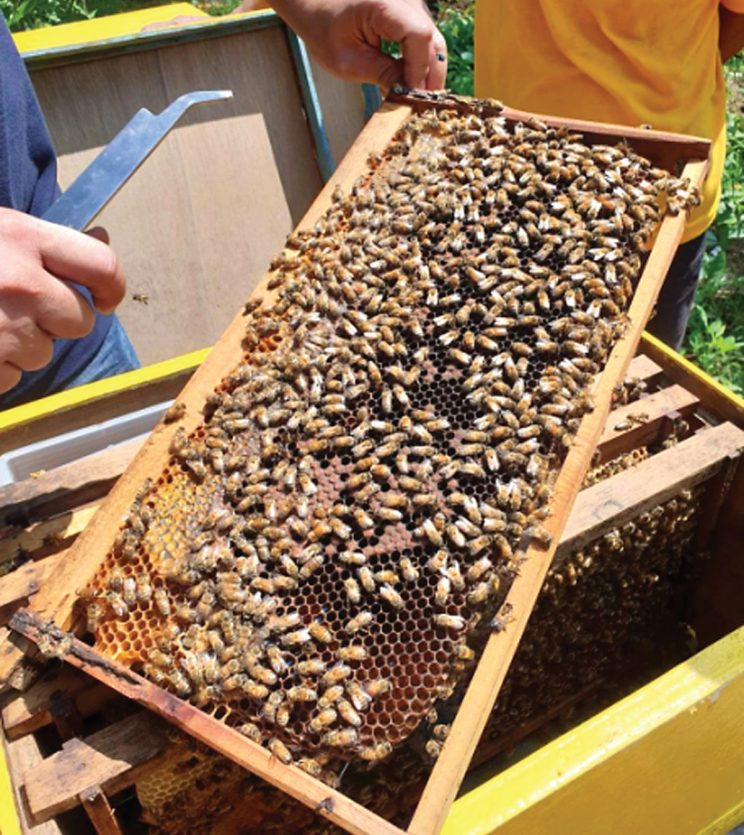 One colony of Italian honey bee, consisting of 20,000 individuals, can produce 30-90 kilos of honey per colony.

“In 2015, when farm tourism started, we opened the one-hectare Milea bee farm to educate farmers and general consumers on how to detect real honey and instill the bees’ importance in enhancing fruit production,” says Omoyon. “I conducted seminars on beekeeping, and one of my seven staff conducts a two-hour daily tour of the apiary.”

Milea’s souvenir shop sells beauty products made from beeswax, bath soaps mixed with honey, shampoo, balms, and leather polish made of beeswax. Honey also comes in 60gram-capsules and the expensive one kilo of stingless bee honey that sells for P2,500 per bottle.

To shoo away bee-eater birds, Omoyon has a flock of pigeons that flap their wings to drive them away.

“Not only honey is used in mixing with herbal teas and baking, it is believed to be beneficial when used as a remedy for various ailments,” concludes Edilee, whose bee farm is one of at least 500 registered beekeepers at beekeeping associations in the Philippines. It is said that honey contains components such as antioxidant, anti-bacterial, anti-cancer, and anti-inflammation properties that help prevent infection.

As early as 5,000 years ago, honey was being cultivated in Egypt, which they used in cooking, as medicine, in embalming their dead, and as a love potion. With all these healthful properties of honey, which was the very first food consumed by our ancestors that nourished humans and animals alike, honey is really the “elixir of life.”

Oyster mushrooms distributed to COVID-19 affected communities in Region I