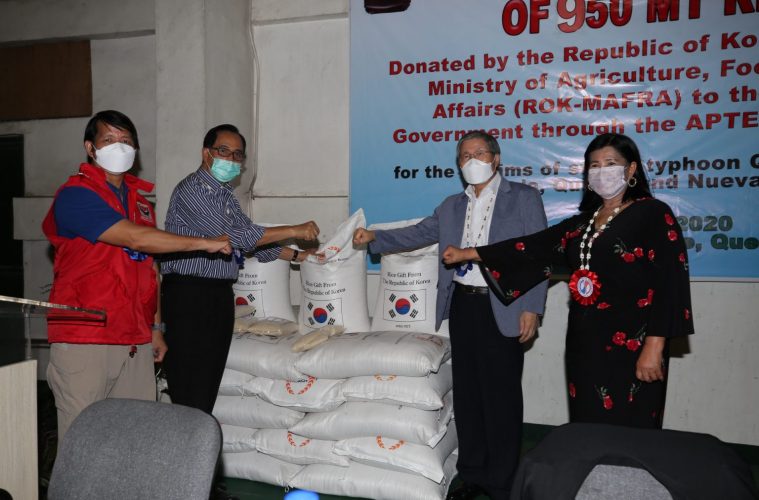 The Republic of Korea (ROK) formally turned over a 950-metric ton (MT) rice donation to the Philippine government, particularly for Filipino families affected by natural calamities in 2019, at a simple ceremony, April 24, 2020, at the National Food Authority (NFA) warehouse, in Quezon City.

“On behalf of President Rodrigo Duterte and the Filipino people, we wholeheartedly accept the rice donation from the Republic of Korea, and thank President Moon Jae-in and the Korean people for their generosity. Rest assured that this will go a long way,” said Agriculture Secretary William Dar, to ROK Ambassador in the Philippines Dong-man Han.

“Through this rice donation, we are hoping to promote the well-being of the people of the Philippines in this time of very limited resources,” said Ambassador Han, citing the strong bond and relationship between the Philippines and Korea.

The donation, packed in 40-kilo bags, was made possible by the Korean Ministry of Agriculture, Food, and Rural Affairs (MAFRA).

“Let me extend my deepest gratitude to Korea MAFRA for their generous support,” secretary Dar added.

He also thanked the ASEAN Plus Three Emergency Rice Reserve (APTERR) Tier 3 Program Secretariat, the NFA, and the Philippine embassy in Seoul for endorsing and facilitating the rice donation.

About two-thirds or 600 MT will benefit 15,000 families affected by a series of earthquakes in North Cotabato and Davao del Sur, and other provinces in regions 11 (Davao) and 12 (Soccsksargen) in Mindanao, while 350 MT will be shared to 8,750 families stricken by floods due to typhoon ‘Quiel’ in Cagayan Valley in Luzon in 2019.

The ROK rice donation arrived last March at the ports of General Santos City (600 MT) and Manila (350 MT). The DA-NFA will turn over the Korean rice to the Department of Social Welfare and Development (DSWD), which will distribute it to family-beneficiaries in Davao, Soccsksargen, and Cagayan Valley regions, in coordination with their respective local government units.

The APTERR Tier 3 is a regional cooperation mechanism involving ASEAN member countries plus the Republic of Korea, Japan, and the People’s Republic of China. It aims to strengthen food security and provide emergency rice assistance to victims of natural calamities in member countries.