How to start and run a community shared agriculture program

We are constantly looking for ways to ensure that farmers earn a living wage. One of the ways this can be achieved is by shortening the route from farmer to consumer.

“The idea of the Community Shared Agriculture (CSA) program is to invite you to become more than a consumer, to share in the risk that the farmers take on behalf of our food system,” says Charlene Tan, CEO of Good Food Community (GFC), a social enterprise that connects consumers with the farmers that grow their food. “It’s a program by which members can be part of farm operations by paying up front for a share of the harvest and the farmer basically plants for this market in mind, these CSA members who share in the risk of farming. As a customer, you get a box of fresh organic vegetables every week, whatever’s in season, and of course, it’s organically grown and the farmer is assured of a stable demand because when they started planting, they already had the customers in mind.”

GFC clients “subscribe to a weekly basket of vegetables, and this in turn, enables the farmer to grow without worrying about having a market or not, and it allows the farmer to focus on what matters in farming which is your nutrition and the health of the soil and the system that feeds us.”

Tan shares that though GCF was formally registered in 2011, they had started talking to farmers as early as the year before. Right now, they work with several communities. They mainly work with the Chico River Organic Producers Cooperative from Bauko, Mountain Province, as well as farmers from Capas, Tarlac, and a small Dumagat community in Daraitan, Rizal. Here are some lessons she’s learned while on the journey:

It is important to know from the start that it will be very difficult to go about an endeavor like this alone. A team made up of similar-minded people can help you set up your business and achieve your goals faster. 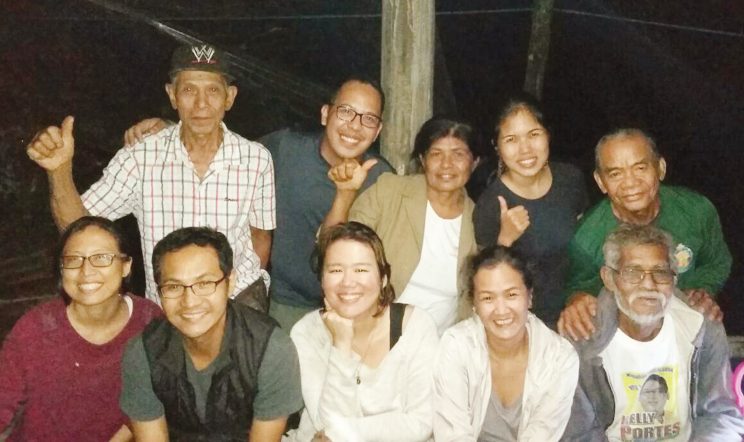 It’s almost impossible to run a CSA program if one doesn’t enjoy meeting people. Engaging with partner-farmers and building a community of like-minded individuals are part of the job, and can be very rewarding in terms of friendships. (Seated front, from left to right) GFC Founder Charlene Tan, Alan Silayan, Agriculture magazine Managing Editor Yvette Tan, vegan author Mabi David, and Sierezza (a zero-waste, CSA-supporting cafe) founder Che Abrigo. Standing at the back are Abrigo’s colleague PJ Villarta and Dumagat elders.

“Step zero is you will need a team. These are people who you can work with and who are willing to do whatever it takes, and with enough skills. You’ll probably need someone who has a little bit of knowledge about growing or working with farmers. You’ll need someone who can drive the car, and you need to have that same people be able to pack and deliver the veg. That’s basically it,” Tan says.

Adapt to partner communities, but don’t be afraid to push for quality

Getting farmers who are used to the ‘traditional’ way of doing things to try something new can be tough at first. Tan shares GFC’s journey with their Capas partners: “When we introduced the idea of growing for a community, they at first had a lot of hesitations, but after a while, when we got it going, they saw how it augmented their cash flow, which can be very risky with the current cash crops, and also fed their households quite well. They began to have higher standards for the food that they were eating plus food security. That’s the story with Capas.”

One also has to remember that each community is different, with their own customs and norms, and that this is something that the CSA organizer has to take into consideration as well. Take for example GFC’s experience with the Dumagats: “It’s a very different world view for the Dumagats. They are basically forest-dependent and they are used to being cheated by traders for whatever they produce and we aren’t really able to plan with them, they just kind of let us know what’s available and we try to source what we can, like if there’s anything in season,” Tan says.

Develop, and continue to develop partnerships

“If we were to tell our younger selves how to do it, this is how it would start. You would begin with the supply. We met the farmers through these different ways. I met the first group in Capas through the NGO I used to work for. First, have an agreement with the farmers and propose to them that you have a community of people who are willing to buy a certain number of products for them at a certain time. Agree on the prices, agree on your standards for what you call organic, and the logistics. Have that groundwork partnership in place,” Tan says. 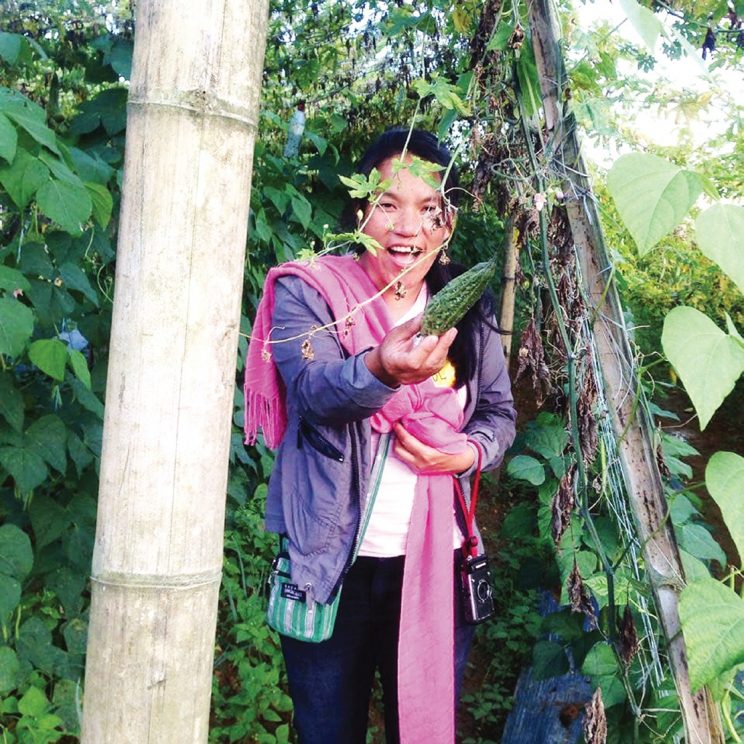 Knowing who plants your food is part of encouraging transparency in the food chain. GFC sometimes posts about their partner farmers on social media so clients have a better idea of how their food is grown and who are responsible for growing it. In this case, it is Ate Solena, marketing manager of Chico River Organic Producers.

To keep the supply of vegetables constant, GFC continues to partner with farming co-ops or communities. They’re also working with a community in Tiaong, Quezon composed of retired people, many former corporate employees who have opted for a quiet life. The profiles of the farms GCF work with may be different, but two common factors tie them together. First, all of them grow vegetables using organic techniques, and second, all of them are smallholder farmers. The farmers agree to provide a set weight of vegetables per week, which the organization agrees to buy at a set price, usually a standard amount throughout the year despite changes in farmgate prices.

“It’s kind of a mixed group that we’re trying to organize but in each case, each of our farmers own the land that they grow on and they have a commitment to grow organic food for themselves, their family, and the greater community,” Tan says.

Don’t be afraid to make mistakes

“Know that you will make a lot of mistakes, especially when you’re doing something that hasn’t been done before. There’s nobody to ask so there’s no formula and it’s just making decisions along the way,” Tan says.

Starting something new means learning new skills. It also means making mistakes. Don’t be too hard on yourself when this happens; making mistakes are a natural part of the learning process. Instead of beating yourself up and worrying about what you did wrong, treat the mistake as an opportunity to do better.

Figure out how you’re going to sell your stuff

While you’re getting your team and suppliers together, you should also be looking for your customers and finding out how you’re going to sell your products.

“Have your team, have the farmers, and have people to buy the product. It was a lot of help to be selling online because previously, we were just kind of texting family and friends to pick up at pick up points,” Tan says.

“You need both (farmers and buyers) so at the beginning, we made the commitment to the farmers but we didn’t necessarily have the market, and even though the market, some people would try it out and they would stop, we were held to our promise. It depends on what your goal is. I feel like, working with smallholder farmers, you really need to start with that. It’s hard to get to the level of trust in the relationship that we’re in if we didn’t start that early. At the same time, it would make sense if we already had a market, but the kind of market that we want would need a diversity of product.” 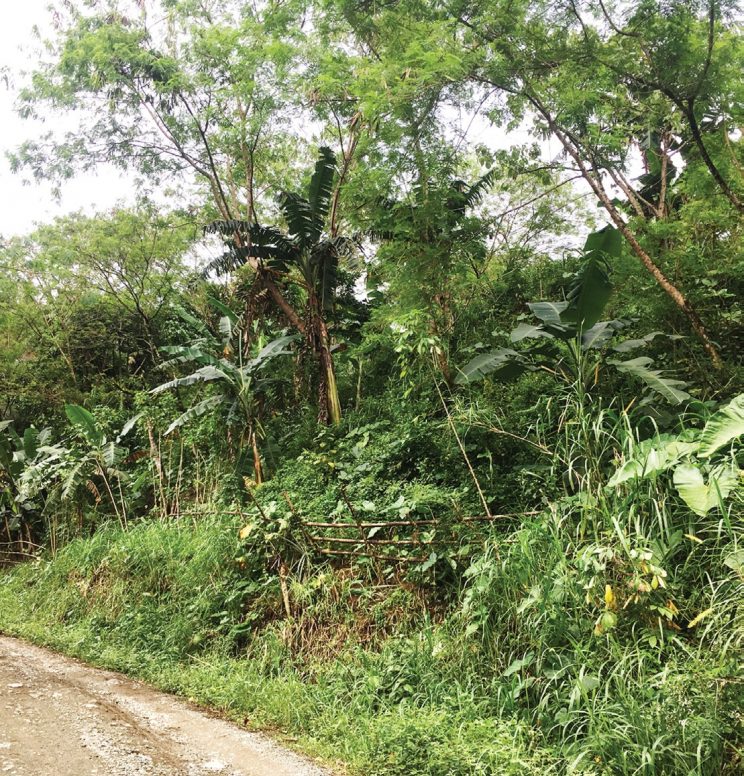 Not all fields will look alike: what looks like a random mountainside in Darapitan, Rizal is actually a lush field filled with produce and farmed by an older Dumagat gentleman. Part of working with partner farmers can involve adapting to their farming style. (Photo by Yvette Tan)

Educate, and continue to educate your market

A big challenge of starting a CSA-based business is educating current and potential customers on the benefits of directly supporting farmers despite a slightly higher price point. It is also important to condition them to buying produce in season. One of GFC’s products is a random basket of whatever vegetables are in season, something that they had to patiently teach their market to accept and enjoy.

“In a way, we had to shape the market as we were doing it because the market at that time didn’t want your random basket of vegetables and it’s only now that people are kind of understanding the value of clean, organic food trumps your choice,” Tan says.

But don’t think that your job is done once you have a steady stream of clients. Continue to spread the word to both potential partner farmers and potential clients. Part of handing a CSA program is being a continuous liaison between farmers and consumers.

“It’s definitely a conversation on what the larger community wants, where the farmers are at, what capacity they’re at, can they deliver by themselves, and can they sell it. Sometimes it’s great because we’re able to connect them directly with [other clients] and they don’t need us anymore. That’s kind of what we imagine, but that’s digressing. But yes, it’s continually educating the market and also having conversations such as, pickup points don’t work here because traffic is awful, so we’ve shifted to mostly door to door. And, an element of choice might be some homemade pesto or pickles would be nice to add to the basket, so that’s kind of the direction that we wanted to take,” Tan says.

GFC is almost 10 years old now, proof that providing consumers access to fresh, naturally grown, seasonal vegetables can be a viable business. Tan explains why running a Community Shared Agriculture program has been so fulfilling: “There’s a vague sense of something beautiful about the way we want to live or the world that we could create and it’s literally the journey has shaped me. My community now, most of my friends, I met through this work, and you have the joy of realizing (things like) we have pears here! We have lemons! We have all these things that you will not find if you’re looking in your grocery store or just looking in the same places. This journey has given me so much.”

To help others launch their own CSA initiatives, Good Food Community is launching a guide to setting up a similar program.