String bean, locally known as “sitaw,” is a vegetable known for its long edible pods. It is used in favorite Filipino dishes such as adobong sitaw, pinakbet, and kare-kare.

Being a commonly consumed vegetable, the Agricultural Training Institute (ATI)-Region XII released a guide on how to produce sitaw. Here are some things to remember: 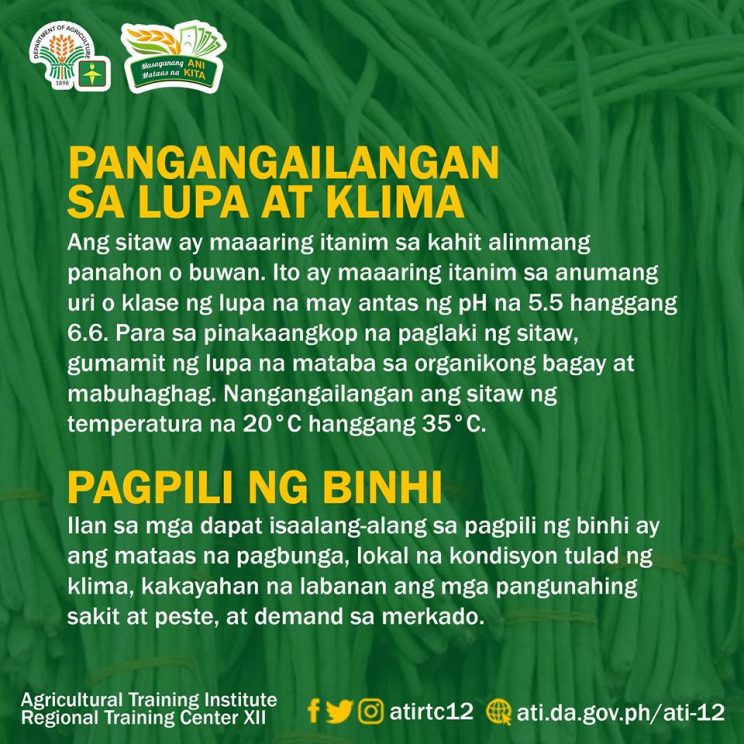 The first thing to consider is the soil and temperature requirements needed to grow sitaw. Next is to choose what variety to plant.

The vegetable can thrive in almost any climate and in any month, but it’s best grown in areas with a temperature of 20 degrees Celsius to 35 degrees Celsius. It can also be grown in any type of soil as long as it has a pH level of 5.5 to 6.6. For the best results in growing sitaw, use loose soil that’s rich in organic material.

One thing to remember when choosing seeds for this particular vegetable is that the chosen variety should be productive, acclimatized, resilient against pests and diseases, as well as in-demand in the market. 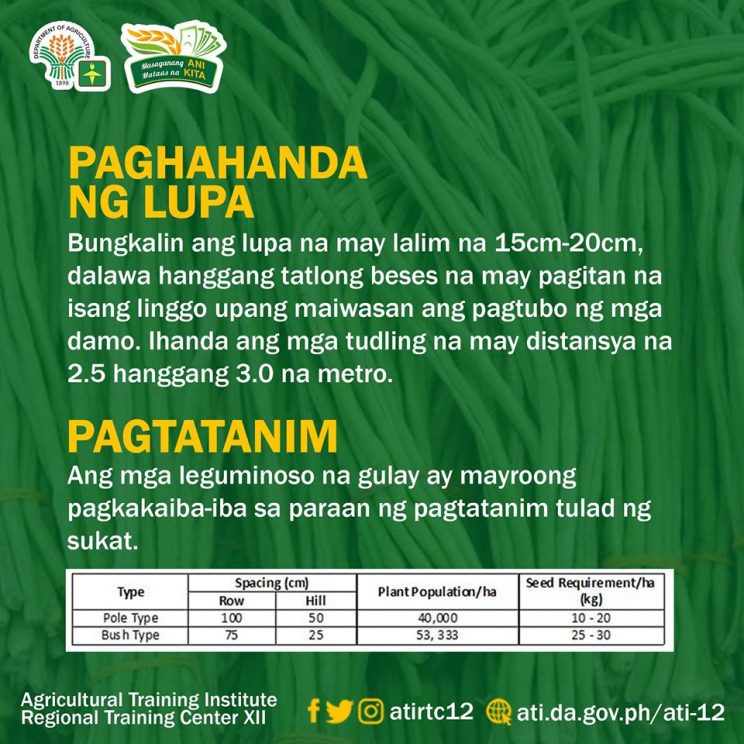 It’s important to prepare the land before planting.

Till the soil with a depth of 15cm to 20cm twice or thrice to prevent grass and other weeds from growing the area. Prepare trenches with a distance of 2.0 to 3.0 meters. 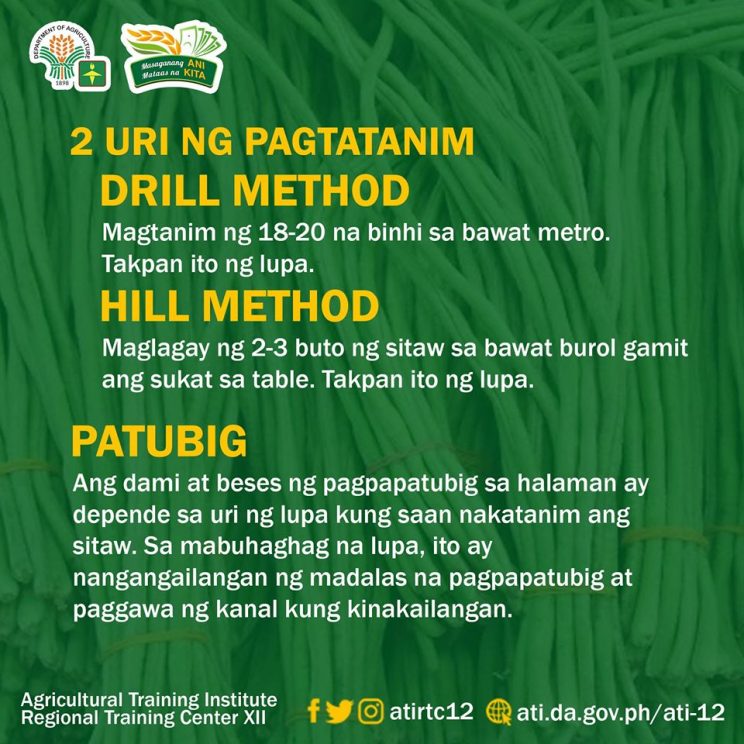 There are two methods of planting sitaw, the drill method and the hill method.

Keep in mind that specific varieties also have specific methods of planting that depend on factors such as measurement between plants.

There are also two methods of planting: the drill method and the hill method.

In the drill method, plant 18 to 20 seeds in every meter before covering it with soil. In the meantime, the hill method relies on the measurement of the sitaw varieties before two to three seeds can be placed in a mound then covered with soil.

The amount and frequency of watering depends on the soil where the sitaw is planted. If planted in loose soil, it requires regular watering and even the establishment of a canal system. 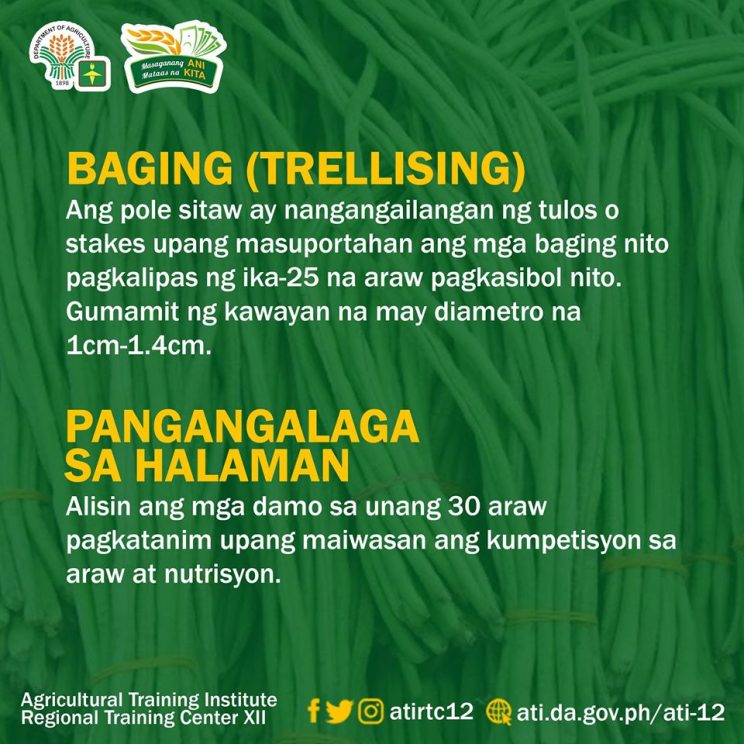 Growing pole sitaw requires stakes to support its vines 25 days after it sprouts. Use a bamboo pole with a diameter of 1cm to 1.4cm.

Caring for the plant

Remove any unwanted grass during the first 30 days after planting to keep the sitaw from competing with each other for sunlight and nutrition in the soil. 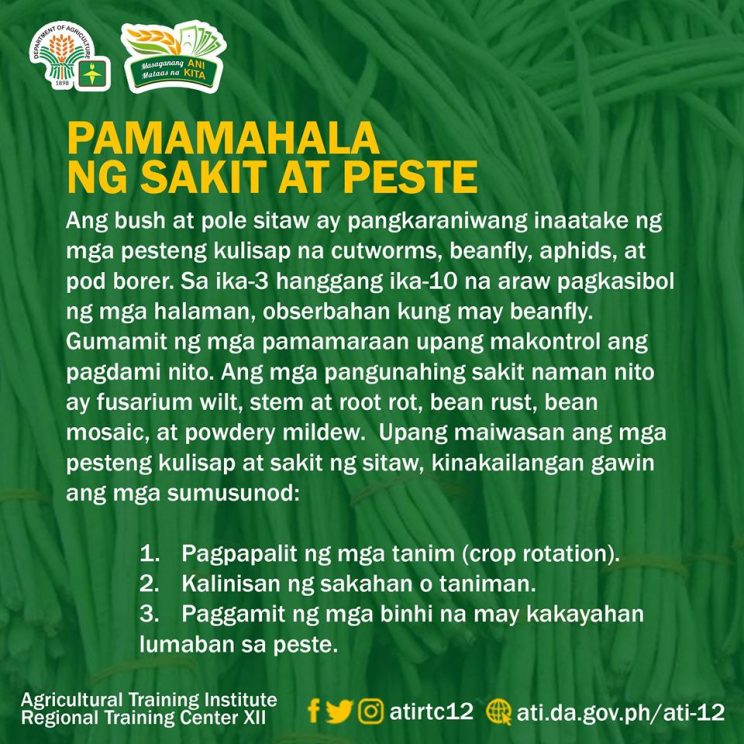 Management against pests and diseases

Bush and pole sitaw are commonly attacked by pests such as cutworms, bean fly, aphids, and pod borers. During the third to tenth day after its germination, observe if there are any bean flies present.

When it comes to diseases, sitaw usually experiences fusarium wilt, root and stem rot, bean rust, bean mosaic, and powdery mildew. To keep sitaw from being plagued by these pests and diseases, practice crop rotation, cleaning the area around the plant, and planting seeds that are pest and disease tolerant. 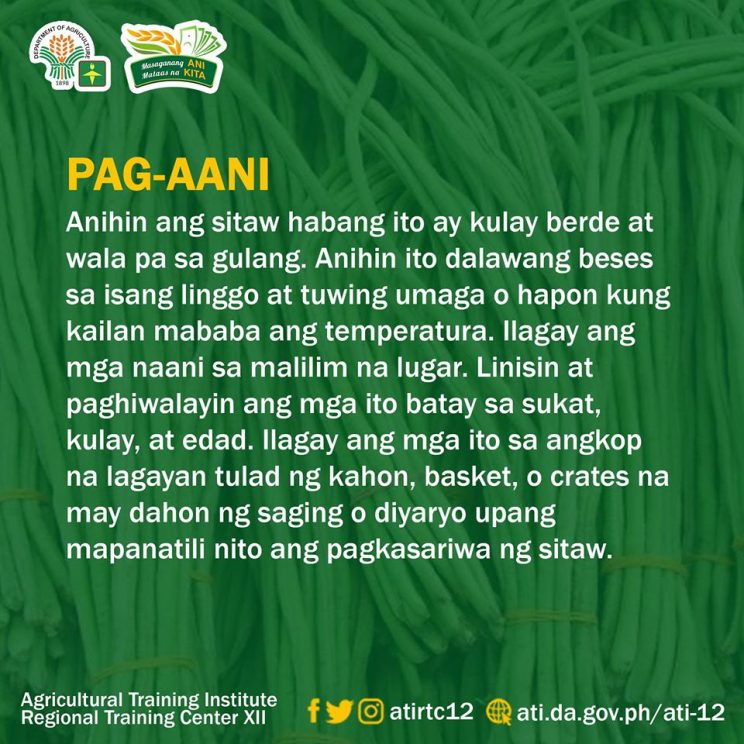 When harvested, make sure that the sitaw retains its freshness by placing it in appropriate containers.

Harvest the sitaw when it’s green and before it ripens. Harvest it twice a week; during the morning and afternoon when the temperature is at its lowest. Clean the harvested vegetables and sort it according to length, color, and age. Then store it in a proper medium such as a basket, box, or crates with banana leaves or newspapers to retain the freshness of the sitaw.

Parish priest constructs a garden to teach sustainability to his community