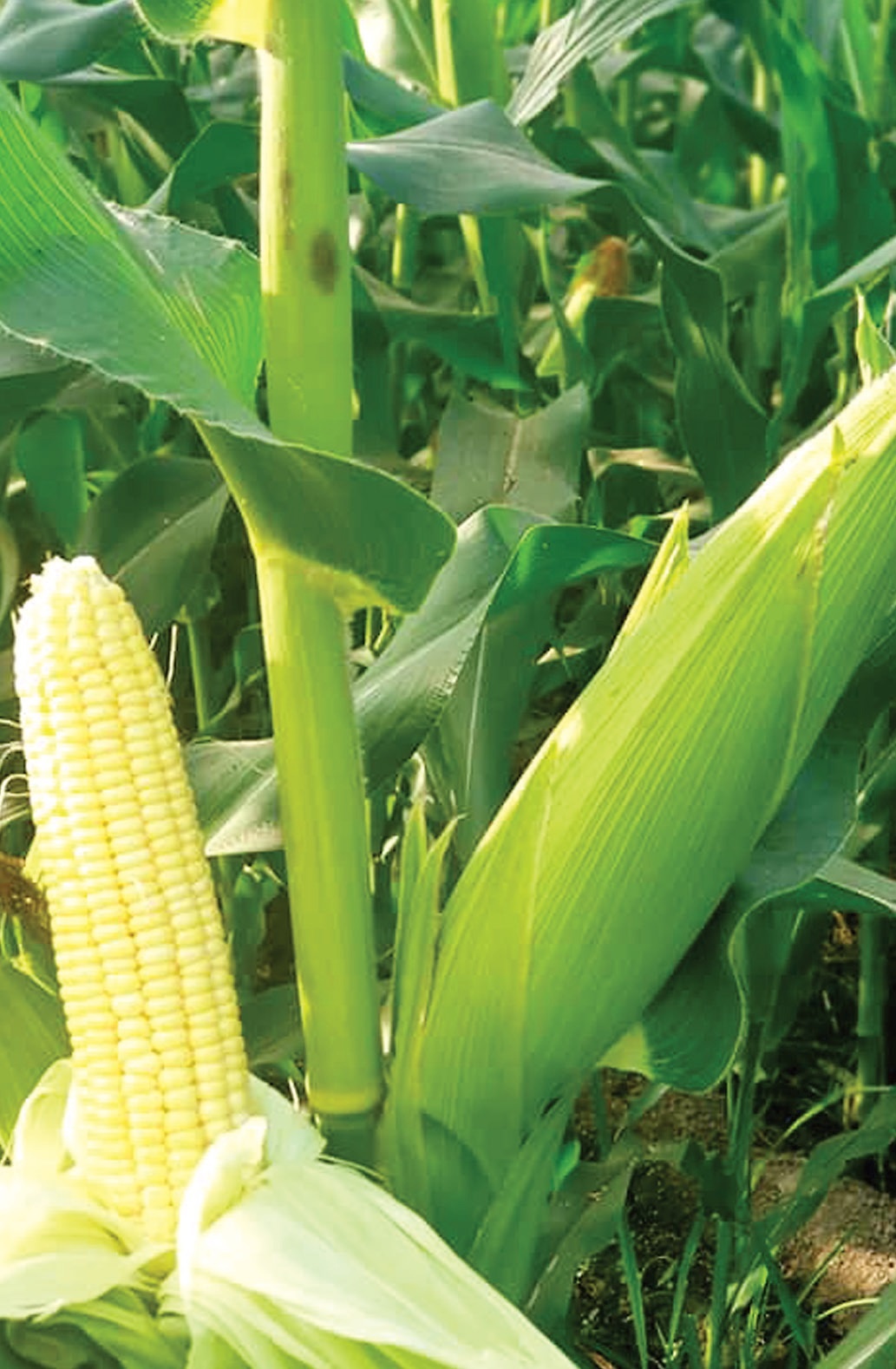 Growing sweet corn can give farmers much satisfaction. There’s something special or magical about a handsome, sturdy stalk of homegrown sweet corn. But the real deal really lies in harvesting it, particularly the way to harvest it. Waiting for the cobs to get fully grown and picking them really makes it exciting and thinking of peeling it back the sheath to reveal those yellow, full, creamy and juicy kernels is just magical! And I bet that there’s no other better treat than cooking them straight for the sweetest possible taste!

Mario Dela Pasion grows his super sweet corn named Bright Jean in a spot that receives plenty of sunshine in his 3,000-sq.m. land at the back of his house on soil enriched with a lot of well-rotted organic matter such as compost. Being a husband, a father, and a farmer is what he’s good at, but what inspires him the most is the support that he gets from his wife, two children, and one grandchild. It was from his passion (coming from his surname) that led him to grow sweet corn despite the lack of helpers in their neighborhood. He worked, plowed, layout, plats, and water his crops all by himself.

A sad story he shared that teenagers, husbands, or students in their neighborhood are no longer interested in farming despite his offers of daily allowances and food. He would end up working alone even if he would vocally utter that he is already tired, since he would start early in the morning until late in the afternoon to finish the job by himself. 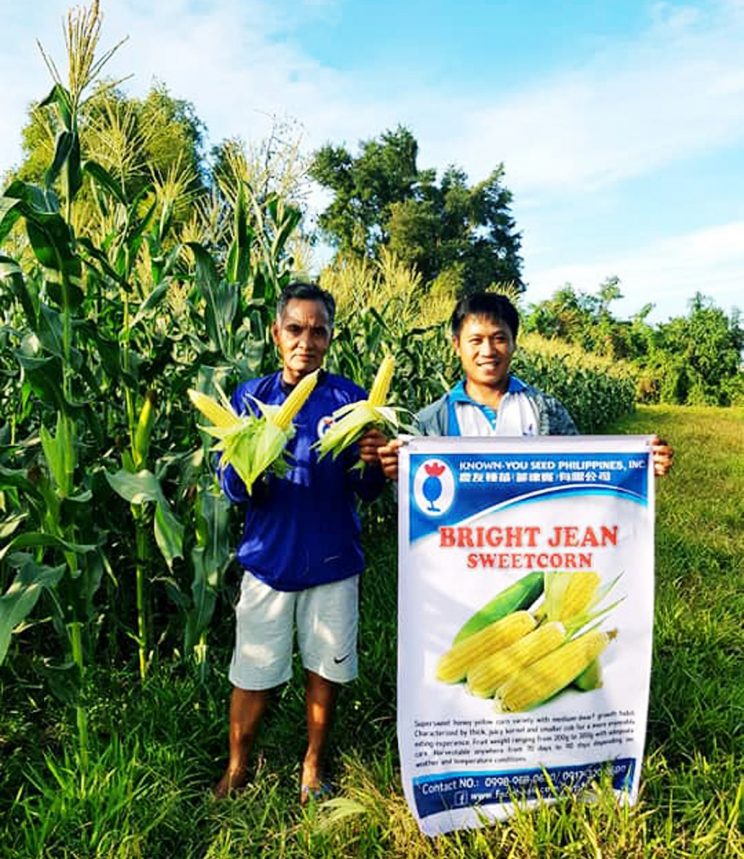 Mario Dela Pasion with Nillam Padilla, Known You representative, among the former’s cornfield.

He thought of using hybrid variety that was introduced by Known You and frequently visited by a representative Mr. Nilliam Padilla. He has been planting the variety for almost a decade now and did not have any hard time bringing it to the market since his customers are the ones who keep visiting his house to check on his harvesting schedule, reserve the quantity they will get, pay, and come harvest time, pick it up.

Bright Jean Sweet Corn grows well during the dry season when supported with sufficient amount of water. It can be harvested 70-75 days from sowing and bears two good sizes of cobs. It is very juicy and super sweet, weighing 250-280 grams per cob.

Dela Pasion planted three kilograms of seeds on his land. Sweet corn is an easy crop to grow on either small or large scale and it loves watering in very dry weather, particularly from late summer, as the silks appear and the cobs begin to form.

Dela Pasion cares for quality and good tasting sweet corn because it is the reason his customers became loyal to his produce and keep coming back after every harvest. 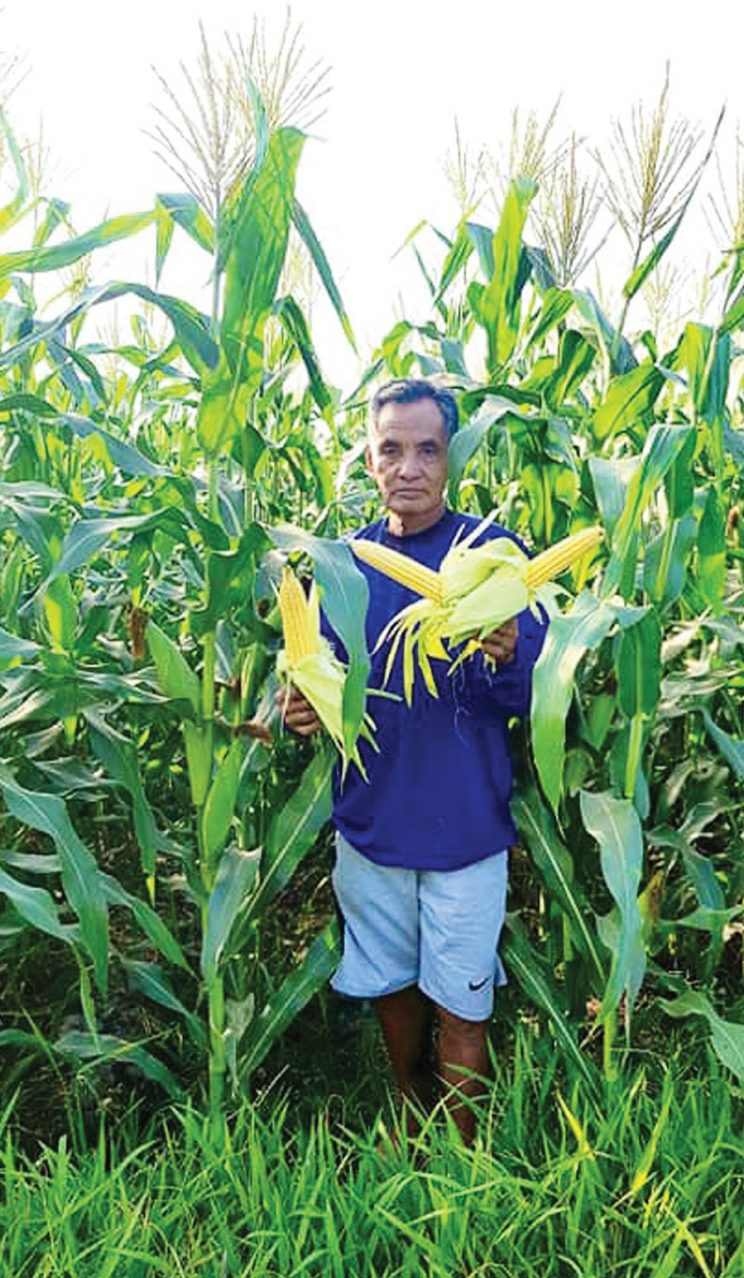 Since he only planted on a small scale of 3,000 sq.m. and working alone in the farm is never easy, he schedules intervals of at least two weeks after every planting. This way, he can manage his time and he can attend to the needs of his plants easily. He sells his Bright Jean sweet corn at three kgs for R100 only. Bright Jean is a special variety with good tasting quality and is being sold for a very cheap price, a nice deal for both farmers and customers.

Passion from a farmer’s heart could really go a long way. Dela Paison hopes to encourage youth to love and give importance to farming. He would like to become an example to the people around him, to let them realize that farming can offer plenty of possibilities and opportunities.

If you happen to drop by Tarlac City, you can easily spot his house near highway, pay a visit to him and buy freshly harvested Bright Jean Sweet Corn for good travel treats!