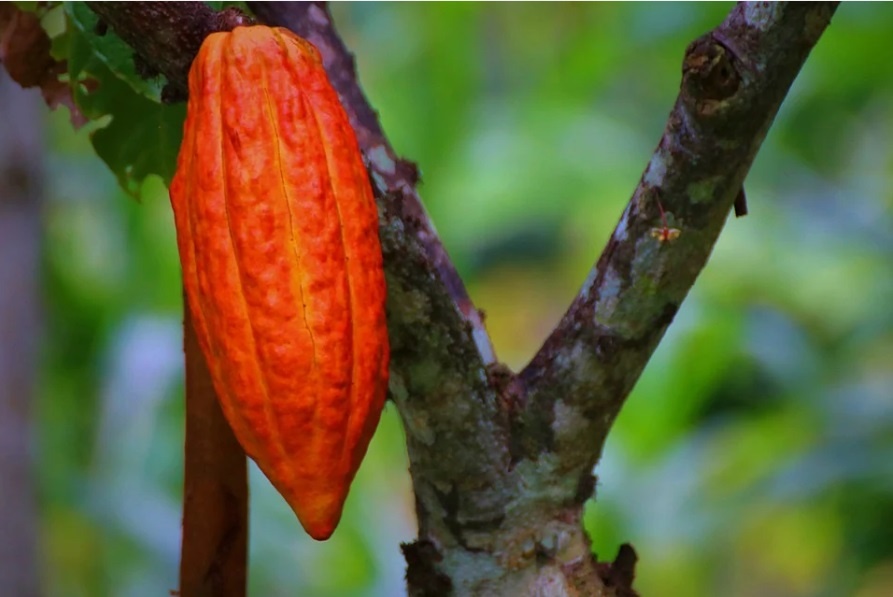 Cacao beans are the main ingredient in making chocolate. It comes from the cacao tree (Theobroma cacao), which grows in areas that have rich, loamy soil and an even distribution of rain all throughout the year.

Growing conditions, however, are not solely responsible for how cacao beans taste. There are different varieties of cacao that not many are aware of: the Forastero, Criollo, and Trinitario.

The commercial variety is known as Forastero. It is the most widely grown cacao tree, and is responsible for around 90 percent of the world’s cocoa supply.

On the other hand, the Criollo is a native type of cacao that produces high quality beans which many chocolate connoisseurs claim to be discernibly better than the Forastero.

Its tree is considered by many to be rare because it doesn’t produce as many pods as the commercial variety. However, it is susceptible to disease and requires more work than usual to sustain.

Lastly, the Trinitario variety is a result of combining Forastero and Criollo. It is a compromise between quantity and quality since the trees are sturdier than the Criollo, but also better tasting than the Forastero.

Auro Chocolate, a Filipino bean-to-bar company launched in early 2015, saw the potential of the criollo–also known as the “Prince of Cocoas,” and opted to have their products made from the variety in order to promote local produce and a sense of Pinoy pride.

“We wanted to use only quality beans for our products and luckily, we didn’t have to look further than in our country to find the criollo variety,” said Kelly Go, Auro Chocolate’s managing director who shares the position with co-founder Mark Ocampo. 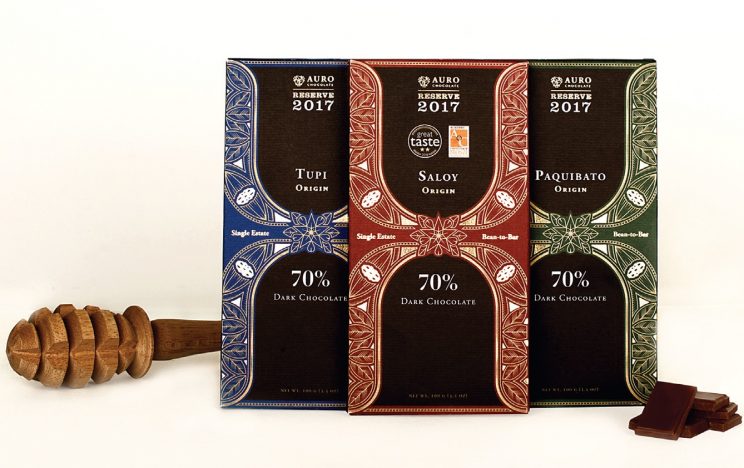 Auro named some of their products after the area where the cacao beans used came from.

Since the company is keen on working only with native cacao beans known to grow abundantly in Laguna and Davao, the company began to source directly from farmers in Davao to acquire quality heirloom varieties while creating a more sustainable livelihood for farming communities in the area as well.

In order to find the right person for the job, the Auro team followed a strict list of requirements on how the cacao should be grown.

“We looked for farmers who grow their cacao in ‘humane’ ways. They shouldn’t be using chemical fertilizers or pesticides and the trees should not be exposed to diseases or pests of any kind,” Go said. 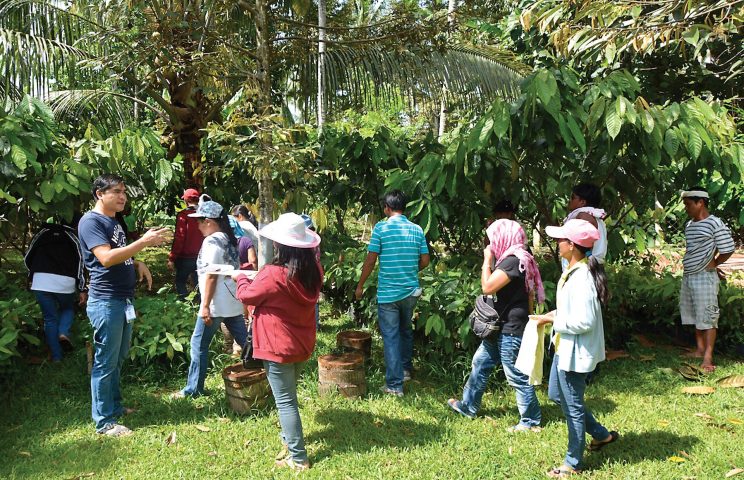 Due to the Criollo’s quality, the Auro team made it their mission to search for the rare native tree to be used in their products.

One of the farmers they met on their journey is Jose Saguban, a cacao farmer from Paquibato District in Davao. He managed to catch the team’s attention with the way he grows his cacao.

“He’s very meticulous and hands-on when it comes to growing cacao beans because he values quality over quantity,” said Jacky Go, mother of Kelly Go.

She added that Saguban would personally taste his beans and plant the seeds of those that appeal to his taste. He smokes the beans in an open flame to determine their quality.

According to Saguban, good quality beans would smoke less than others.

Recently, Saguban was recognized as one of the best cocoa bean producers along with 49 others from across the globe in the Cocoa of Excellence Program (CoEx) 2019.

Saguban’s success as a supplier for Auro has captured the attention of his community, which has now shifted to growing cacao beans in their backyards. 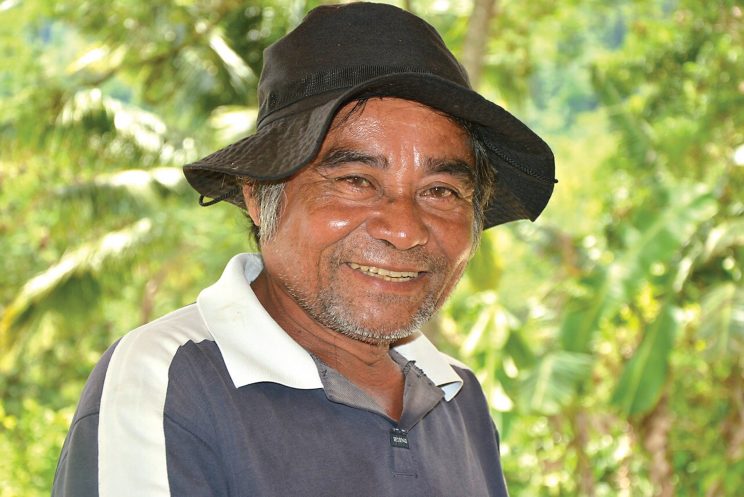 Jose Saguban was recently acknowledged as one of the best cocoa producers in the world.

The Paquibato farmer’s success and the encouragement of his fellow cacao farmers is what Auro aims to achieve.

“Our team aspires to help educate more farmers on how to maximize their harvest while conforming with international standards when it comes to the quality of the cacao beans they produce,” Ocampo said.

During their search for the Criollo, Ocampo shared that they discovered many farmers have cut down their Criollo trees because they didn’t understand its value.

“Fortunately, they now realize it can be profitable and have followed in the footsteps of Mang Jose,” he said.

To help them find their footing, Auro Chocolate assembled a technical support group to provide farmers with information on proper planting and postharvest methods. 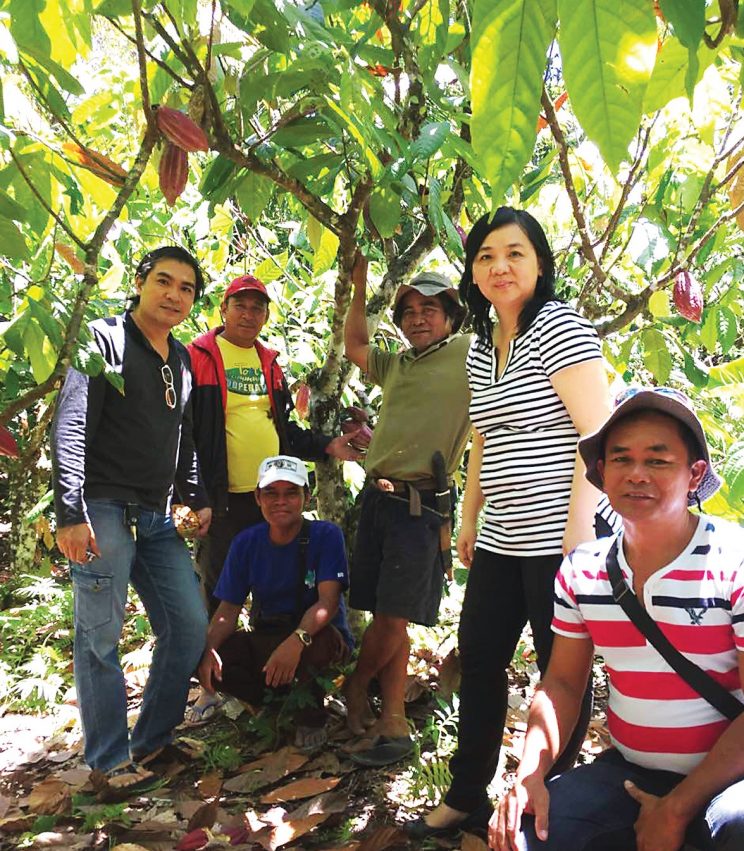 In recognition of the farmers’ efforts in growing the rare Criollo variety, Auro Chocolate named their signature products after the area where the beans were harvested.

Places such as Paquibato and Saloy in Davao, along with Tupi and South Cotabato are namesakes for their dark chocolate bars.

“Some of the areas where we source our cacao beans are far-flung areas which not many people are eager to visit because of its distance from the city and other private reasons,” Go said.

Go explained that by naming the chocolate bars after their points of origin, Auro puts the respective areas on the global map while empowering Filipino farmers to continue preserving and promoting local products.