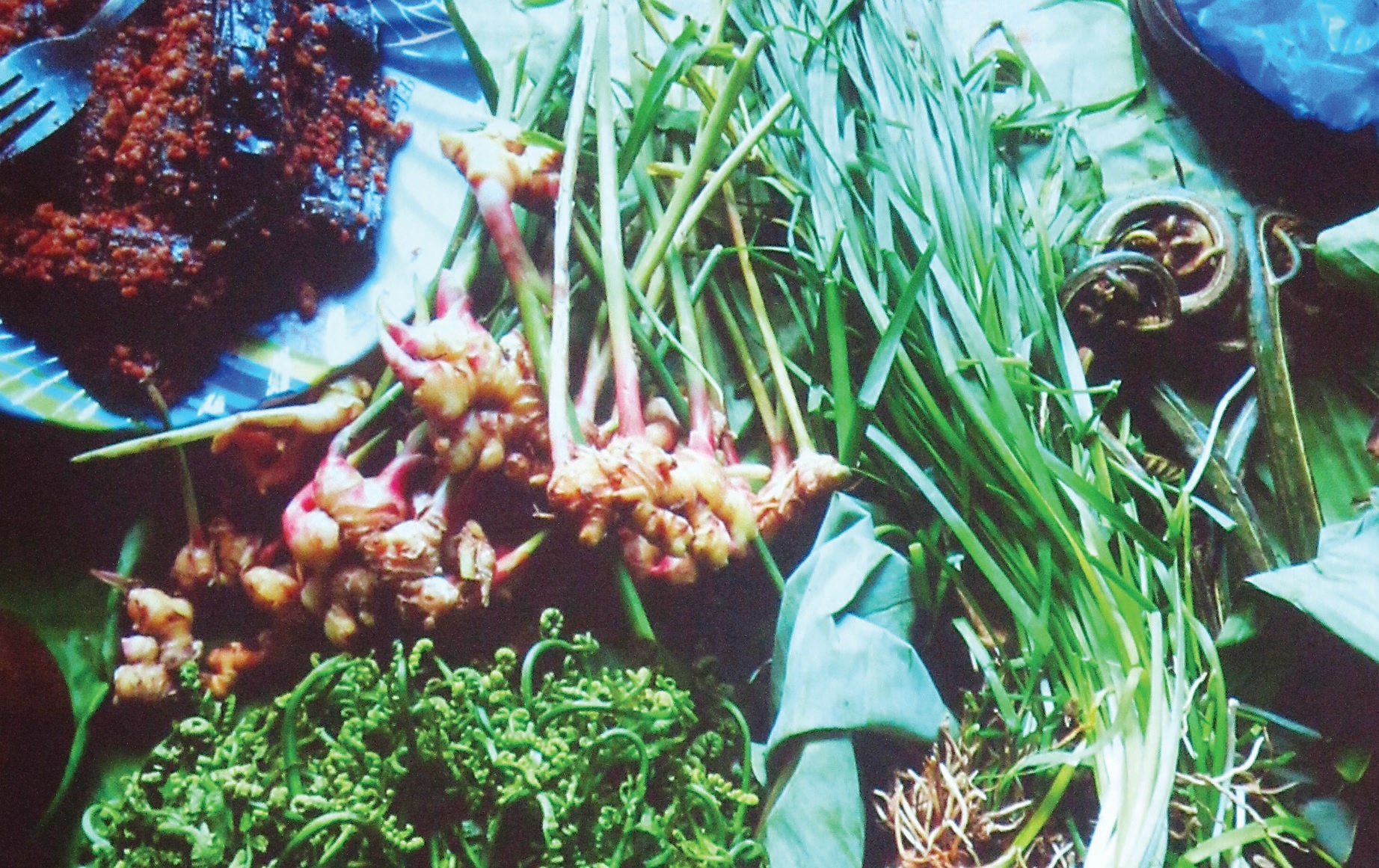 Food and culture are synonymous among people in the Cordillera region, who are rich in cultural traditions which are showcased through food and festivity. Food, according to them, is something that is meant to be shared among family, community, and with the unseen, from whom these blessings come. Thus, it is never to be wasted, but always valued and shared

During a recent forum at the World Food Expo, a cookbook showcasing 100 heirloom recipes of the Cordillera region was launched as part of the Food and Tourism for Mountain Development project. The cookbook gathers recipes from the Cordillera people’s daily lives and reflects their indigenous cultural heritage as embodied in their diverse food cultures.

As shared by Jacqueline Cariño, convenor and executive director of the Philippine Task Force for Indigenous People’s Rights, and who is also the editor of the book, “the belongingness to community is manifested in the preparation of food.” An example of this is the inandila in Kalinga where it takes a village of women to prepare the recipe for community feasts – from the pounding of rice, mixing, forming and wrapping, steaming, unwrapping, cooking the coconut into ladek or latik, until the delicacy is ready to be served. 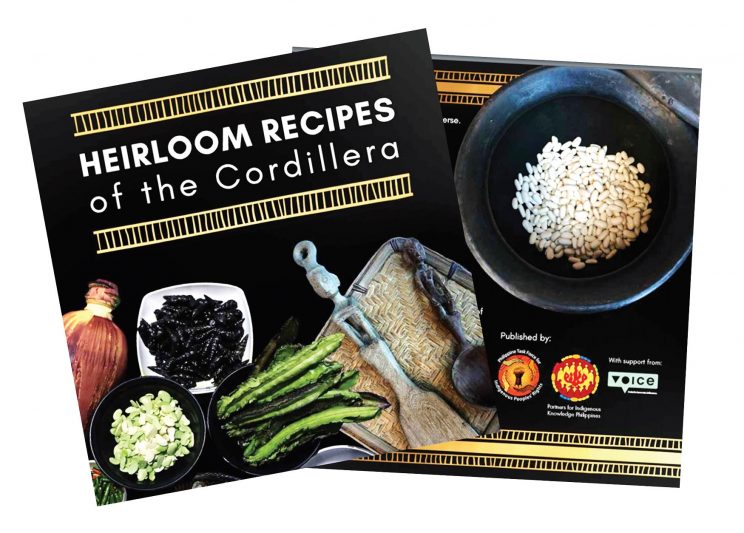 This book features the heirloom recipes of the Cordillera.

“All these heirloom recipes that we have gathered and published in the cookbook are products of the creativity and innovation of generations of men and women, who, working with simple ingredients, and simple cooking implements, are able to produce delicious and healthy meals for their families, communities, and visitors, and not to forget, the unseen spirits who accompany the people in their daily lives,” Cariño further shares.

Many believe that the people of Cordillera are carnivorous, because, often, their exposure to traditional food is during traditional feasts, weddings, and rituals where lots of meat is the main dish. Watwat, or simply boiled pork meat, demshang or roasted pork skin, and pinuneg or blood sausages are part of most Ibaloy ritual celebrations. The food served here are simply cooked, boiled, or roasted.

However, meat is not always the main component among recipes in the Cordillera communities; ingredients on the food served are also dependent on what is available in the field, backyard, swidden farm, forest, or water. Their traditional diet is also as diverse as the biodiversity in their homeland.

Rice as a staple

Rice is a staple supplemented by root crops. Children are taught not to waste a single grain since supply of rice is limited. For many Cordillera communities, rice is planted once, sometimes twice, that is why the harvest has to be stretched out to feed the family for the whole year. They incorporate camote, banana, or gabi into rice recipes to stretch the rice supply. Each community has their own way of cooking rice for special occasions like linnapet (ground sticky rice with peanuts wrapped in banana leaves) in Besao, inandila (ground sticky rice shaped in tongues, wrapped and steamed in takong leaves, and served with coconut ladek) in Kalinga, or binakle (a combination of sticky rice and camote) in Ifugao.

So what is eaten with the rice? The Cordillera traditional diet is also high in vegetables.

In Kalinga, binongor gathers together in dish banana heart, langka, squash, beans, mushrooms, edible shells from the river or the rice fields that is cooked with lots of chili. Chili is said to preserve the dish for a week.

Another favorite dish all over Cordillera is boiled pulses or dried beans, which are boiled along with small pieces of smoked meat. The gabi plant is also widely cooked here. Gabi stalks are simply boiled with some dried salted pork or kiniing, garlic, and ginger. Many greens are used like camote tops, sayote shoots, amti, tungsoy watercress, and masaplora (passion fruit) shoots. “Our informants from Sadanga said that a simple diet of rice with greens with occasional meat is the reason for many of their elders living until they reach 100 years old,” Cariño reveals.

Preservation techniques also help the people in the Cordillera preserve their surplus food and store them for future use. Sun drying, air-drying, smoking, salt-culturing, and fermenting are part of these techniques.

Making wine and vinegar is also one preservation technique using rice, sugar cane, kamoteng kahoy, or fruits. Wine is usually served during special occasions; popularly made in the provinces of the Cordillera are the different versions of rice wine called tapey, tapoy, or baya.

Like the inandila, or the Kalinga rice cakes, which takes a village of women to prepare such delicacy, it took many people to help gather the materials and put together the ingredients in order to come up with the dishes in the cookbook. With the book, awareness of the food traditions of the Cordillera people is starting to grow. What was once invisible and undervalued is now slowly getting recognized as a valuable heritage of the Cordillera indigenous people. 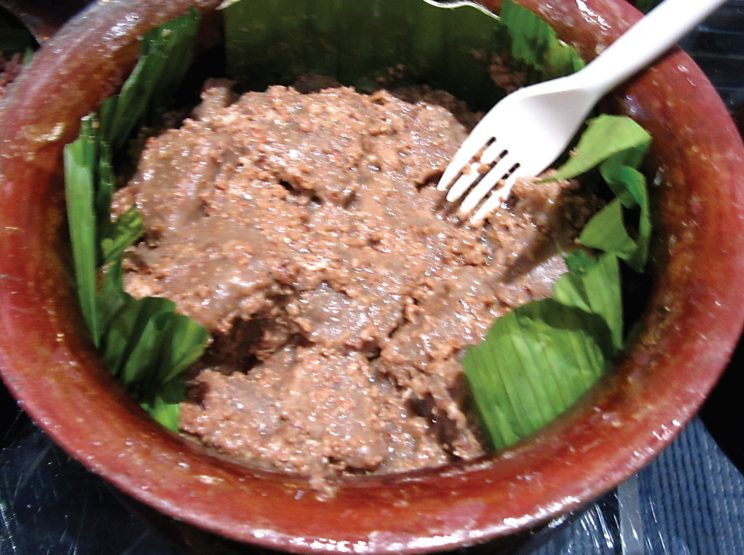 A food tasting featuring varieties of Cordillera gastronomy, such as the Inanchila made from the Heirloom Rice of Pasil, Kalinga, was also part of the book launching at the World Trade Center, Manila.

“But what is most important for us is to document these simple recipes, continue to cook delicious and healthy food using natural ingredients, and transmit this knowledge of our indigenous food cultures to the younger generations. Keeping alive our indigenous knowledge is just as important as defending our ancestral land, our biodiversity, and our natural resources, so that these will not be lost for the sake of future generations,” Cariño concludes.