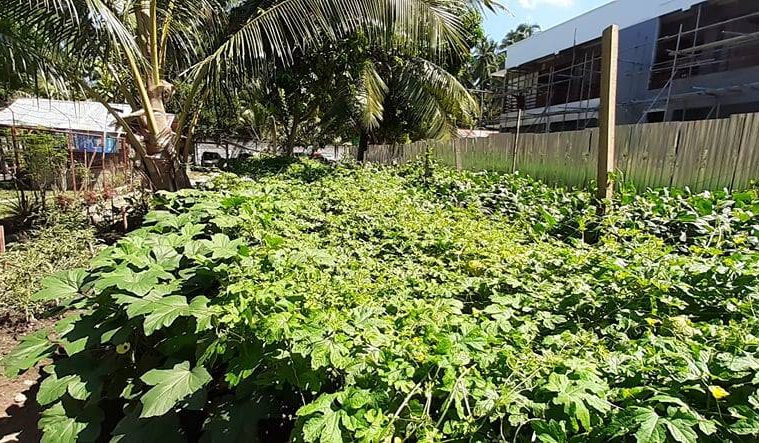 Since March 15, the enhanced community quarantine (ECQ) which has been imposed to keep people safe from the COVID-19 pandemic has kept most people strictly confined in the comfort of their own homes.

This also affected the personnel as well as the inmates of the Lupon District Jail (LDJ) in Lupon, Davao Oriental since no one can enter or exit the facilities until the quarantine has been lifted.

To keep them occupied, Jail Officer 3 Marlon De Leon, a Bureau of Jail Management and Penology in LDJ, said that they engaged inmates and persons deprived of liberty (PDLs) in farming to make their days productive.

Cash crops such as sitaw grow in the vegetable garden.

“We came up with the idea of gardening since it helps us fight boredom and it has beneficial results such as fresh and healthy produce as well as exercise,” De Leon said.

According to De Leon, the seeds were supplied by the Municipality of Banaybanay, which is also located in Davao Oriental.

Utilizing the skills that are already there

“Some of our inmates were farmers before they were incarcerated and we know we can hone their abilities instead of just wasting time inside  their cells waiting for their cases to be called in court since the pandemic has caused almost all government transactions like court hearings to be put on hold,” the jail officer said.

He added that they only utilized five to eight PDLs on a rotational basis because they can’t allow a large number of inmates out of their cells.

They did this by choosing only PDLs and inmates with petty crimes or those who are waiting for approval on their probation. And most importantly, these inmates have to be trusted.

In the meantime, De Leon added that the personnel of the city jail were also engaged in the project because they saw it as a hobby to keep them busy during the lockdown.

Jail Officer 3 Marlon De Leon is one of the jail’s personnel who has a background in vegetable gardening.

Presently, the vegetables that they produce are consumed by the inmates in addition to their daily subsistence. When the lockdown policy is finally lifted, De Leon shared that they plan to market their produce as a source of additional livelihood for the inmates.

Other than growing vegetables, the LDJ warden also decided to care for livestock such as native chickens, geese, turkeys, ducks, and pigs.

The inmates also care for livestock such as native chickens.

“This is a very  memorable experience for us because despite the crisis we are facing today, we managed to make something productive. We have also proved that in every problem we face, there’s always hope in every trial,” De Leon said.

As for the PDLs, De Leon also said that when they go back to mainstream society, they can tell a story that their stay in LDJ has been both worthwhile and productive.