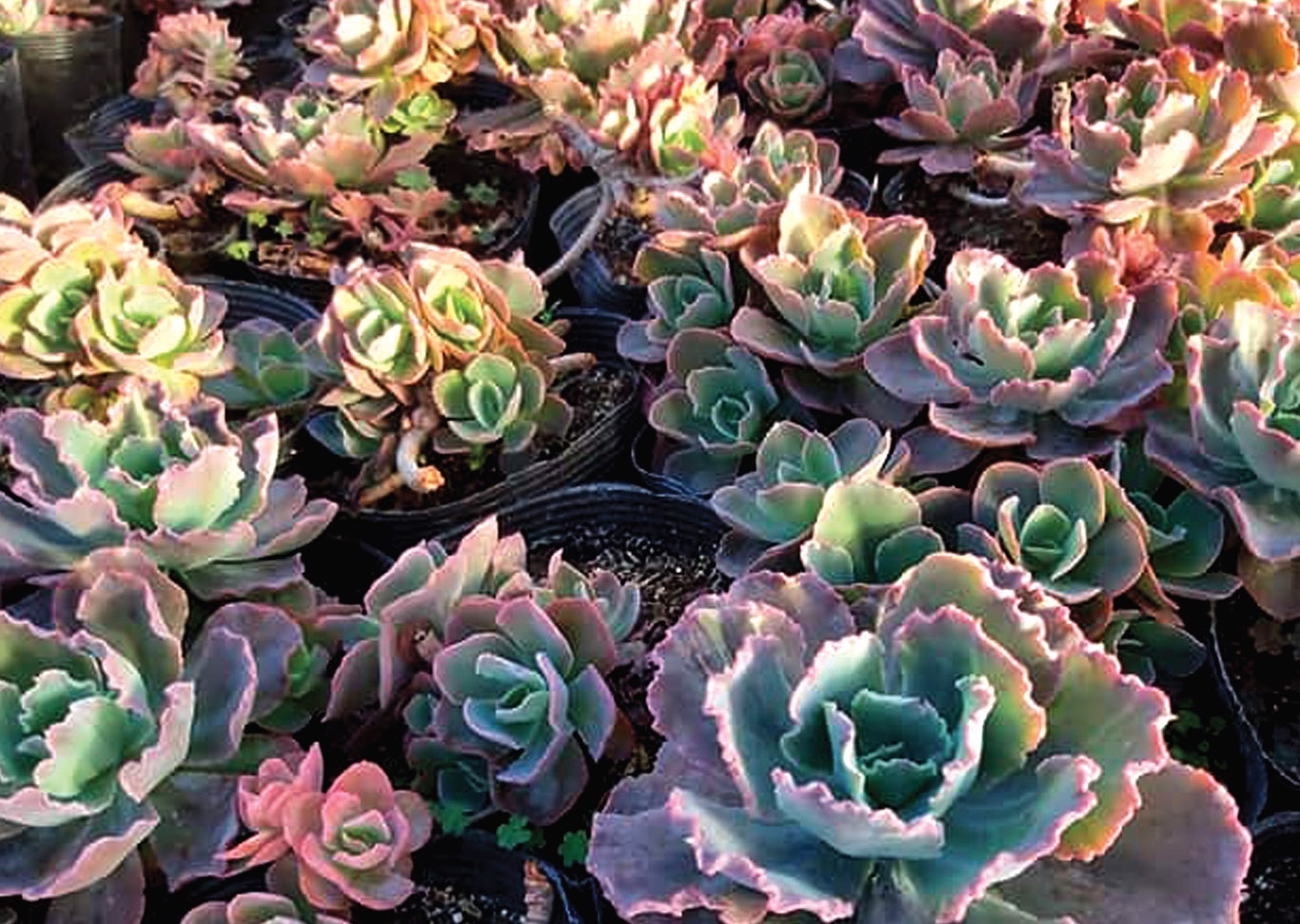 Over the years, succulents have grown popular among budding and seasoned gardeners because of their various shapes, sizes, and colors that delight its growers. But what people like the most about these plants is their ability to withstand prolonged periods without water, making them suitable for those who aren’t exactly blessed with a green thumb.

Succulents store water in their leaves that allows them to thrive in dry and warm climates, which they commonly prefer over the humid and cold.

However, not many people know that the ideal temperature to grow succulents range from 15 to 27 degrees Celsius. These conditions are what helped Haight’s Farm grow quality succulents in Paoay, Atok, Benguet. 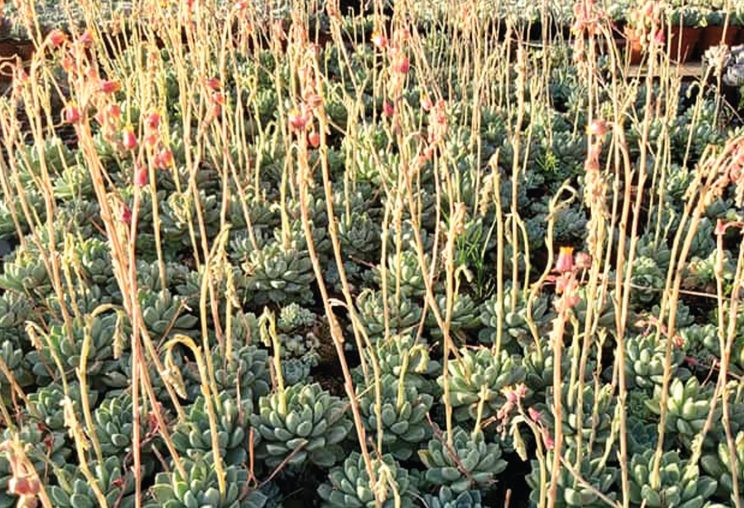 Succulents are known for being drought-tolerant and low-maintenance.

“[We learned that] succulents grow better in cold environments but are very resilient since they can withstand up to a temperature of four degrees for cold climates and 32 degrees Celsius for warmer conditions,” said Edward Haight, a member of the Haight family who currently manages the farm.

Benguet is mostly known for growing high-value crops that thrive well in colder environments. Yet, PJ Haight, Edward’s nephew, thought that it was time to divert from this usual scenario, which then led the family to start planting and growing succulents on their property.

“I decided that our farm should be different in terms of production since there’s the ongoing issue of oversupply in vegetables and cut flowers,” PJ Haight said.

Presently, the farm grows around 24 types of succulents classified under Echeveria, which is a large genus of flowering plants in the Crassulaceae family. This kind of succulent is native to the semi-desert areas of Central America, the northwestern part of South America, and Mexico.

The succulents from Haight Farm are exported to the Japanese market, where they get orders that can go as high as 1,500 seedlings per variety.

“We also sell our succulents to the local market, especially in Manila,” the younger Haight said.

He also said that since the plants were shipped to a foreign market, they had to follow global standards which meant they had to produce healthy, disease-free succulents, with the leaves compact.

“It was hard at first because we received a lot of rejections from our target market. We didn’t have any prior knowledge on how to grow this kind of plant and that made it harder. But when we learned the ropes over time, it got easier to do,” he said.

Now, Haight is proud to say that some of the best quality succulents that the Japanese prefer come from Atok.

According to Edward Haight, their succulents are cared for like any other potted plant and it’s fairly easy to maintain succulents because of their low-maintenance nature. However, their biggest nemesis in the growing process is the weather.

“We grow [the succulents] both in greenhouses and indoors. We have to watch out for the unpredictability of the weather because extreme cold or heat can damage the plants,” he said.

During the warm weather, Haight explained that their succulents would be located in a shady area to keep them from being “sunburned,” which is characterized by scars on the leaves. Filtered sunlight is recommended during summer. 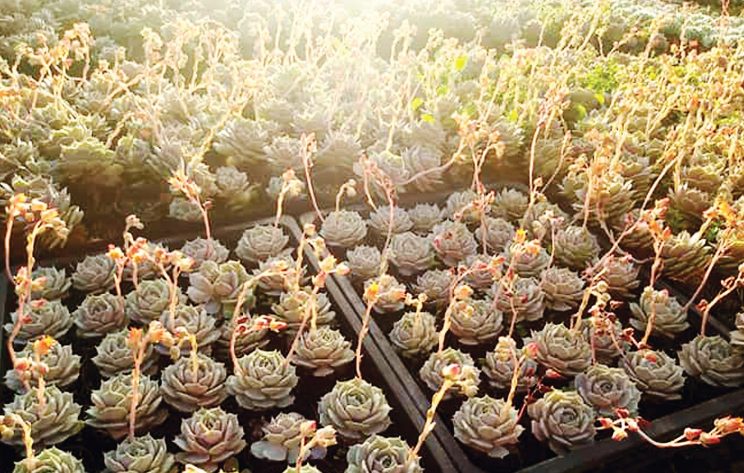 Filtered sunlight is recommended during summer to avoid scarring on the leaves.

As a low-maintenance plant, the succulents in the Haight Farm are only watered once or twice a week to avoid drowning the plants and ruining their overall quality.

Other than being drought-resistant, succulents are also generally pest-resistant, a trait which the Haight family and staff of the farm appreciate because they don’t have to use any chemicals that could be harmful to one’s health.

“Although succulents are easy to grow, the main challenge lies in propagating them because we have to make sure that we get the quality and the appearance of the plant right for our clients,” Edward Haight said.

The elder Haight also shared that the family members, along with farm workers from the area, are taking care of the succulents themselves. However, his nephew PJ contributes a lot of his time and effort in growing these export-quality plants.

The succulents grow alongside different varieties of flowers and small potted trees found on the farm. 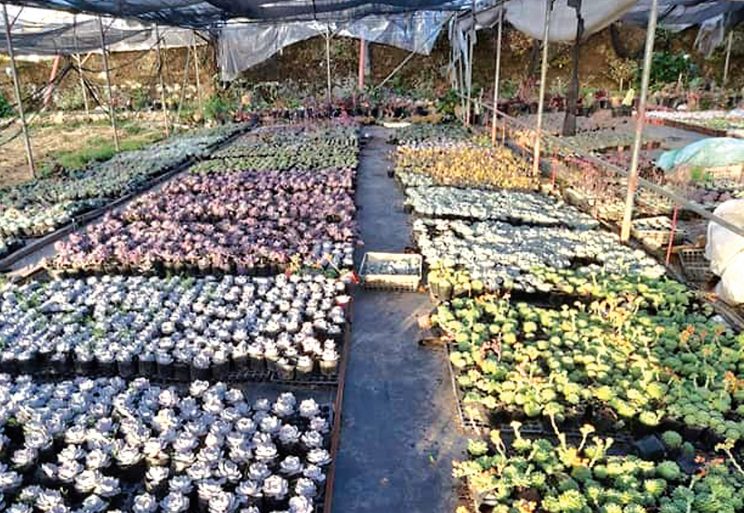 Presently, the farm grows around 24 kinds of succulents.

“We even grow Japanese variety vegetables which we also export to Japan to be sold in their grocery stores,” the younger Haight said.

Haight Farm has also made headlines through their various farming efforts such as growing blue potatoes and cherry blossoms on their property to boost their agritourism aspect while promoting the importance of agriculture.

The Benguet farm was established shortly after World War I when Franklin Guy Haight, a former United States soldier, decided to stay in Sayangan, Atok, Benguet after getting attached to the area and recognizing that it has the appropriate soil and climate for farming.

Guy started a family of his own by marrying Susi, a local resident of Atok, and introduced her to farming. The couple would plant crops like potatoes, turnips, strawberries, and more. He then moved on to educating the members of the community about vegetable farming.

Over time, the couple developed as farmers and were able to acquire properties such as their own house and other infrastructures which they used to accommodate guests on their farm.

When Guy passed in 1925, the farm was left in the capable hands of the Haight children, who valued their parents’ hard work by caring for the land rather than selling it for profit.

Haight Farm has been passed on from generation to generation and is considered a family heirloom.

Today the farm is managed by the fourth generation of the Haight family, who continue to advocate for the importance of farming as their ancestor did over a century ago.

Haight Farm continues to attract visitors because of its quality produce, farm tourism aspect, and its dedication to keeping the agriculture industry well-appreciated in the country.

Why the food industry uses plastic packaging and how it started