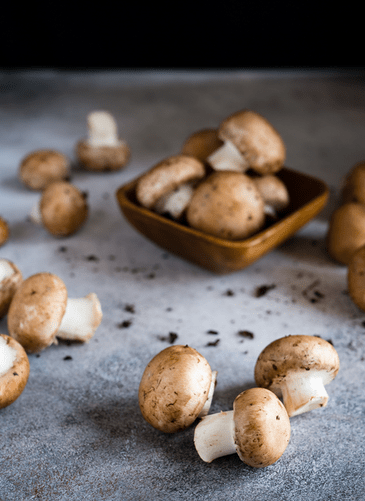 One of the efforts of the Department of Agriculture MIMAROPA (DA-MIMAROPA) includes training in mushroom production and processing. Through this, some participants have applied the knowledge in their own homes. Among them is a couple from Puerto Prinsesa who attended the training and ended up establishing their own mushroom growing house.

Ruvelyn Adobo, a home-based call center agent and her partner, Dennis Ganibo, a former construction electrician, started growing mushrooms in June 2019. Dennis loves farming as a hobby and when they both started attending training sessions on mushroom production and processing conducted by the DA-MIMAROPA, they saw it had great potential as an extra source of income for their family. When they were deciding what to put up for their first business together, apartment rental was the first thing that they had in mind, but after the training, the couple was encouraged to set up a business in mushroom culture instead. 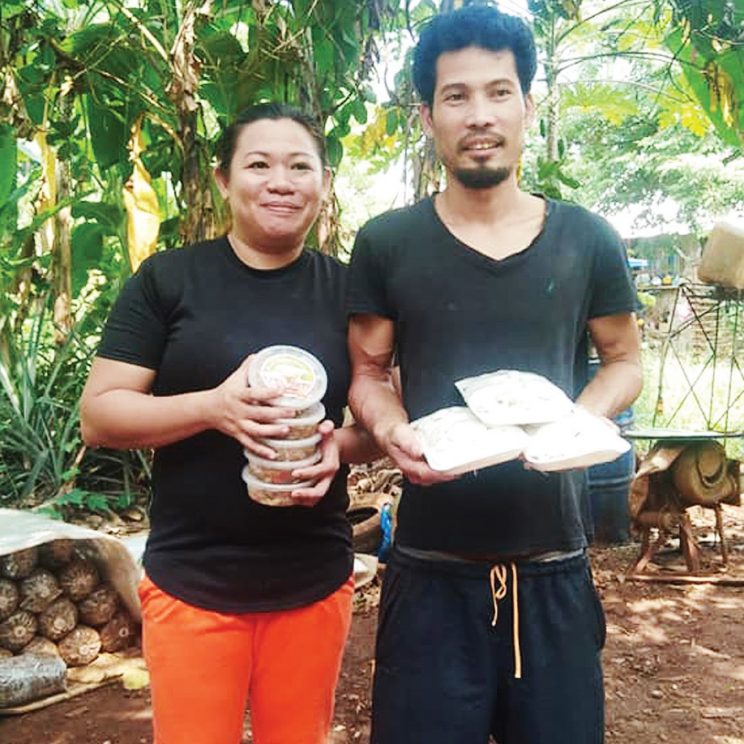 Now they manage their own mushroom growing and processing business in Puerto Princesa called Densruve, which is the combination of Dennis and Ruvelyn’s names. At first, they experimented in a small room that eventually turned into a full mushroom growing house that can hold up for about 6,000 to 7,000 mushroom bags. In the beginning, they usually earned P500 and below per day, but due to increasing market awareness in Palawan, they now earn no less than P1,200 every day.

The couple started with zero knowledge in mushroom cultivation, but with the help and assistance of DA-MIMAROPA, they were able to learn how to grow and process mushrooms. In terms of maintenance, Dennis said that cleaning should always be done for the proper growth of mushrooms. Keeping the mushroom house clean is important, as it prevents contamination. A crucial part of this is regularly checking on each mushroom bag to monitor possible contamination and pests that may occur.

Most of their products are delivered to market stalls in Palawan. They are the source of fresh mushrooms in many markets, Ruvelyn said. They also sell their products through their Facebook page, while other buyers are restaurants, canteens, stores, and their online and offline customers. They also deliver to certain areas in Palawan, Iloilo, parts of Visayas, and Metro Manila. Ruvelyn said these mushrooms are not just healthy and eco-friendly, but it also helps family and their community in terms of livelihood and employment; it’s a win-win situation.

The couple currently has one mushroom house outside their home. They’re planning to expand it to five mushroom houses in the future and aim to make it a mushroom farm. The couple encourages everyone interested in the mushroom business to attend training and ask for help and support from DA because it will add to their knowledge before they start producing and processing. 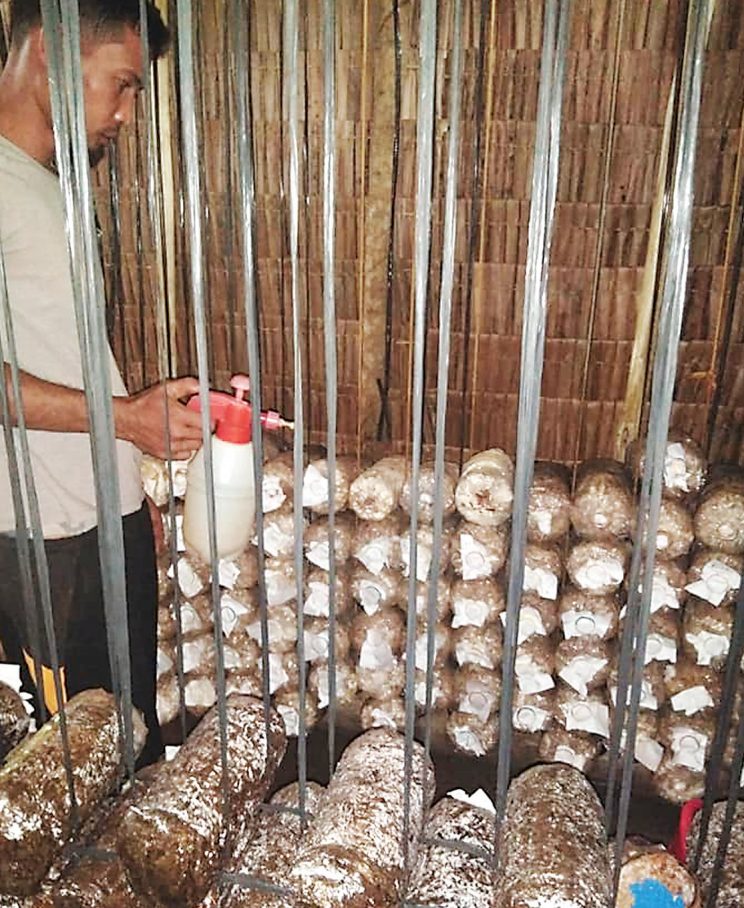 In maintenance, spraying enough water two times a day during the dry season and once during the rainy season will keep the mushrooms moist.

Dennis is a full-time grower while Ruvelyn helps during the day. Their routine in the morning is set for harvest, cooking, processing, and/or delivering to customers. The money Ruvelyn makes from her job as a home-based call center agent sometimes also helps keep the mushroom business going.

When it comes to problems that they encounter in the business, it is only the work ethic and culture of workers in the area that is a bit challenging as they are sometimes less motivated to work, Ruvelyn said. Being a manager who deals with people in the call center industry, she has strict standards in hiring workers for their business. As of the moment, they have two workers helping them and they’re planning to hire more as the business gets bigger.

The harvested mushrooms are divided so that there is enough for the value-added products and for customers who want fresh mushrooms.

In a span of a month, they can harvest over four thousand mushrooms. Reaping is continuous for four to six months but after that, the fruiting bags will have to be replaced.

Growing mushrooms is an ideal start-up for people who would like to start with a small capital investment that does not require big land for cultivation. Mushroom cultivation is also convenient as it is not a seasonal crop and can provide consistent monthly income.

As the demand for mushrooms continues to grow in the market, Revelyn is hopeful and looks at the endless possibilities that their business holds in the future.