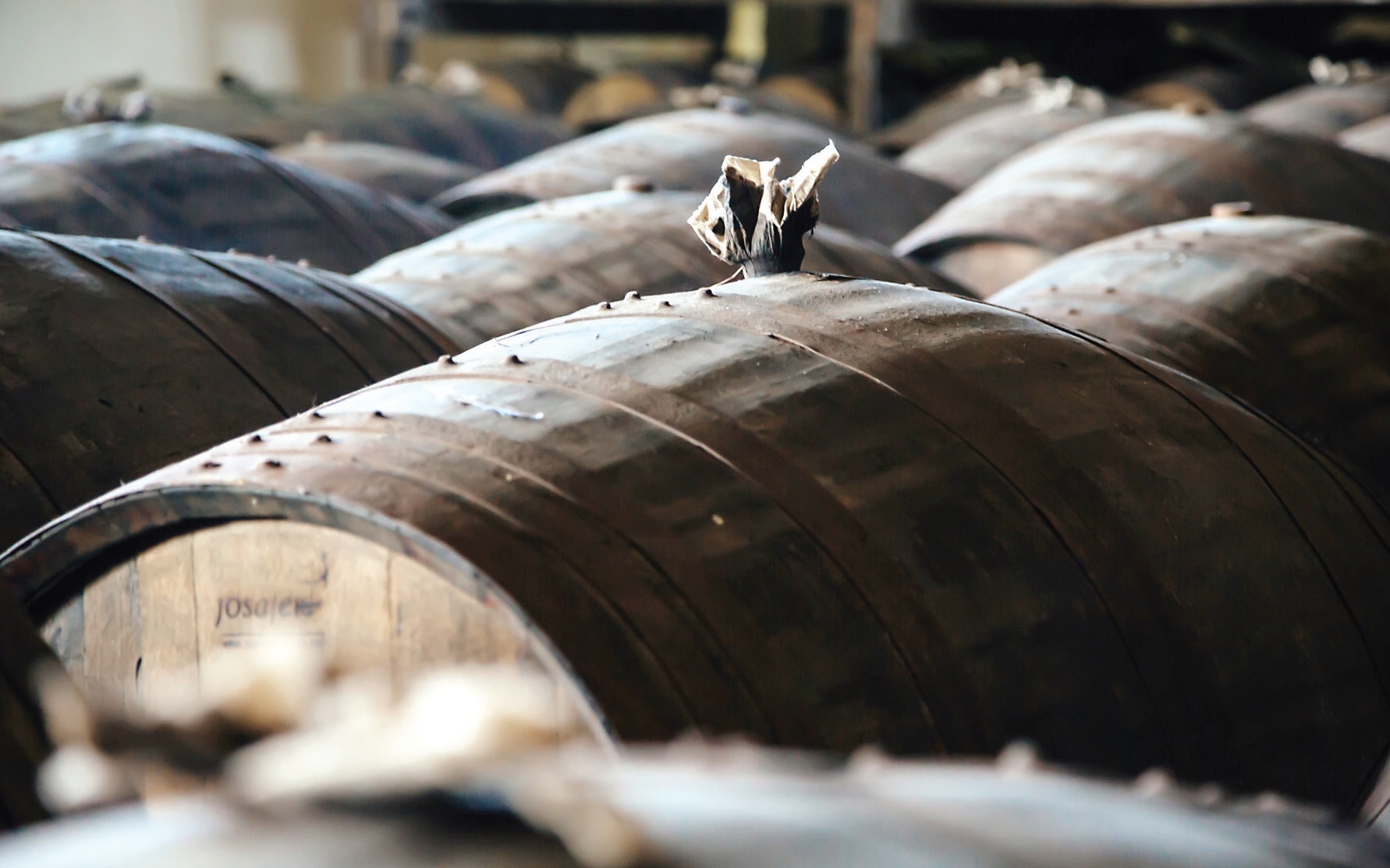 When most people hear the word ‘agriculture,’ the first thing that usually comes to mind is either crops or livestock. What many forget is that one very important aspect of the human experience is also an agricultural product: alcohol.

The last decade has seen the rise of premium spirits worldwide. In the Philippines, one of the most recognizable alcohol brands is Don Papa Rum. Launched in 2012, the brand prides itself on using sugarcane sourced from different farms in the Negros Island Region.

As of 2019, the Philippines was number 13 in the world’s top sugar cane producers, with the industry contributing 70 Billion to the Philippine economy annually. Fifty-one per cent of sugarcane is planted in Negros. Given that Negros Occidental, in particular, is known as the “Sugar Bowl of the Philippines,” it was only a matter of time before the island became known for premium rum as well. 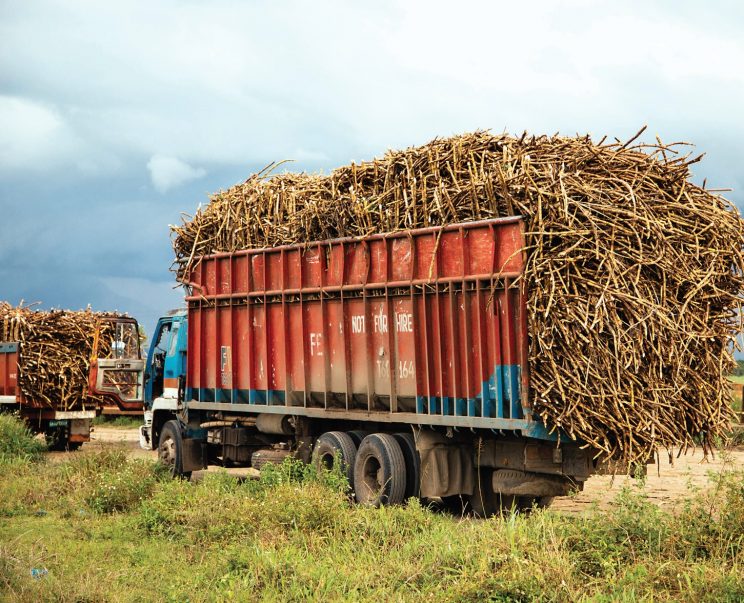 Fifty-one per cent of the Philippines’ sugarcane is planted in Negros. The Philippines was the top 13th sugar-producing country in the world in 2019.

Rum is an alcoholic drink made by fermenting and distilling sugarcane juice or molasses. The resulting clear liquid is aged in oak barrels where, depending on the grade, it acquires its amber color and caramel-like taste.

Don Papa Rum was started by Stephen Carroll, Monica Llamas Garcia, and Andrew Garcia. The idea came about while they were vacationing in Negros one summer. “They were having coffee in a friend’s ancestral home and they were like, wow, there’s so much sugarcane here, where’s the… premium rum?” relates Erica Larkins, Brand Manager for Asia at Bleeding Heart Rum Company, which produces Don Papa.

The three founders have combined backgrounds in alcohol distillation and marketing. Carroll was a former executive at French spirits group Rémy Cointreau, while Garcia and Llamas Garcia have marketing backgrounds. “The three of them combined, they were like wow, okay, let’s create this wonderful product for the Philippines,” Larkins says.

Named after a Negrense hero

Don Papa was inspired by Dionisio Magbuelas, or Papa Isio, a babaylanes leader from Negros Occidental during the Philippine Revolution. He was also the last Philippine revolutionary leader to surrender to the Americans. “He believed that the Filipinos are more than capable of governing themselves,” Larkins says. “Those are the things [the founders] loved about it. They really, truly believed that we Filipinos are more than capable of standing on our own.”

Ingredients or raw materials are important building blocks of a product, and this is where Negros sugarcane really shines. “They’ve traveled all over… and really, the sugarcane from Negros is one of the sweetest and one of the lushest… you can find [in] the world,” Larkins says. 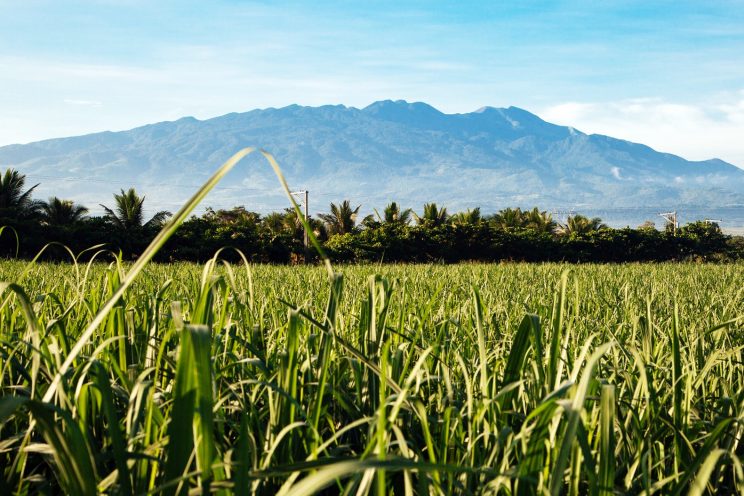 Mt. Kanlaon, the third most active volcano in the Philippines and the highest peak on the island of Negros, is responsible for the island’s nutritious soil.

Don Papa is a single island rum, “meaning the sugarcanes that are used to make this product is 100% from Negros,” Larkins says.

The sugarcane isn’t the only thing that’s quintessentially Negrense. Larkins says that the way the rum is produced is very much of the island. “It’s more a community that we built with Negros. We work with [farmers]. They own the land [and] till it, and there is the sugar mill which is owned by someone else,” she says. “We have a toll manufacturing agreement with Ginebra San Miguel. It’s really a community that works together to create a product…. You know what, let’s help out each other. We don’t own lands. It’s the Negrense way of doing things.”

Partnership and product made perfect

Don Papa works with toll manufacturer Ginebra San Miguel. A toll manufacturer is a company with specialized equipment who produces items to a customer’s specifications. The distillery is in Bago City, 45 minutes away from Bacolod City in Negros Occidental. “They have very strict quality control. They basically look through everything. They do the whole process. We’re very, very happy with the kind of agreement and partnership that we have for them,” Larkins says.

The rum is made from molasses, the thick, brown syrup left after sugar has been extracted from sugarcane juice. “It’s what you use to make piaya,” Larkins adds, referring to a popular molasses-filled flatbread pastry from Negros Occidental. 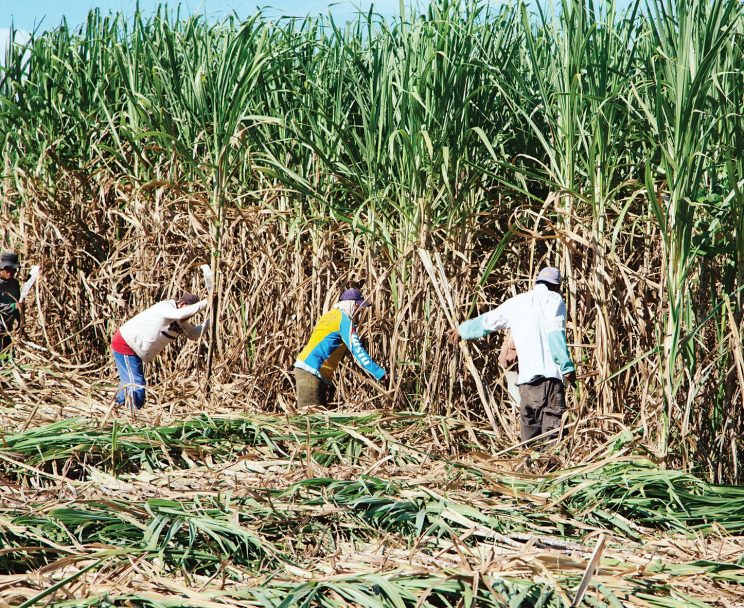 Bleeding Heart Rum Company, which makes Don Papa, sources all of its sugarcane from farmers in Negros.

There are three rum making processes: English rum is produced from molasses, distilled in copper stills and aged in barrels, and have a spicy, dark flavor. Spanish rum is also made with molasses. It is distilled in column stills and aged in casks and is known to have a smooth taste. French rhum, short for ‘rhum agricole’ (agricultural rhum), is made from sugarcane. Its flavor is haracterized as fresh and bright compared to rum made with molasses.

Don Papa distills their rum the Spanish way, not quite using the Solera process, which involves transferring differently aged product to a series of barrels to age them some more, resulting in a blended, mix-aged spirit whose average age increases over the years. “With Don Papa, we don’t use solera, it’s more just the process itself. It’s aged in [a number of] American bourbon barrels. The finished product is 100% seven-year-old, 100% 10-year-old,” Larkins clarifies.

Depending on the expression (what they call their different products), Don Papa’s spirits are aged in former bourbon barrels and sometimes in former sherry casks. The company employs a master distiller who helped create the flagship product and who continues to create other expressions for the brand.

Larkins adds that the continuous and increasing need for ingredients means that their partner farmers always have a market. “We’re very happy to create a product for them to supply us with. It really does increase their livelihood and we’re very happy about it. Our production is getting bigger and bigger. We’re in 27 countries now. We’d love to continue doing this, not just for the brand itself but also for them,” she says.

After an excellent product, one of the keys to success is proper branding. Storytelling is important, as it allows clients to identify with the product on a personal basis. There was no doubt that Negros’ romanticism would be the inspiration for this. 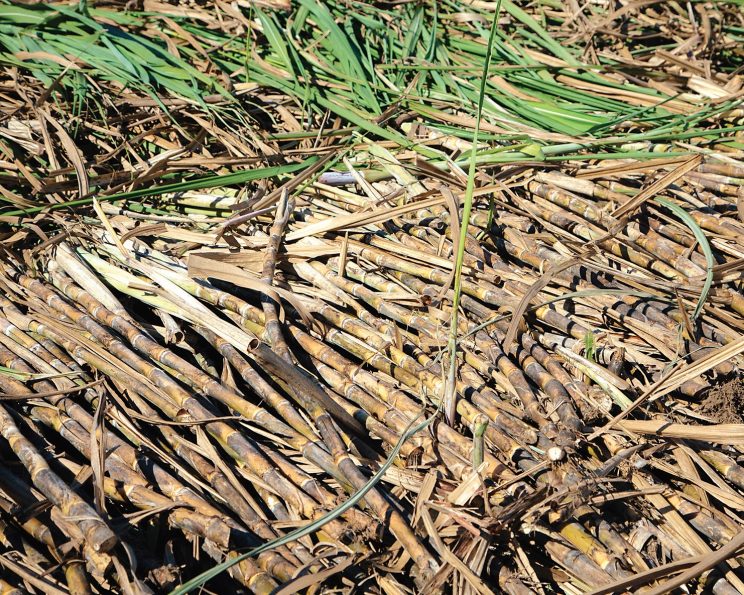 The brand came about after the founders realized that while Negros has some of the best sugarcane in the world, it didn’t have a tradition of making premium spirits.

The rum’s lore is that it’s said to originate from “Sugarlandia,” a mystical “Land Between the Sugarcanes.” “It’s the world that you can actually imagine. When you go in, you see lush, fertile land, lots of plants, where your senses are heightened. It’s very colorful, and that’s rooted in the vibrancy of the island, how lush it is,” Larkins says. This is what the brand seeks to inspire in the people who drink its products, and is the jump-off point for the rest of the brand’s identity, including its design.

The makers of Don Papa worked with a British design company Stranger and Stranger, who specializes in alcohol and spirits brand packaging. “We did win quite a lot of awards for our packaging, which we’re very proud of,” Larkins says. “We have awards for packaging and product development. The Rare Cask won in 2017.”

Don Papa’s awards in design inspired it to champion local artists as well. It holds a yearly art competition whose winner is commissioned to design a limited edition art canister, a collector’s item that comes out at the end of every year. “We saw that there’s a commonality between art and Don Papa, and [we see our art competition] as a platform where we can further heighten [Filipino] artists so that they can showcase their talent internationally,” Larkins says.

The brand has been partnering with ArtFair Philippines for five years now, with the top 10 finalists behind exhibited and the competition winner being announced during the annual art event. “[This year’s winner is] Giovanni Aving. He’s going to Barcelona for four weeks [for] an artistic sojourn. There’s no strict program. It’s really for him to experience the local art scene, get inspired, and travel. It’s all-expense paid,” Larkins says. Aving will also be designing this year’s limited edition canister.

With an excellent product, a distinct brand strategy, and a well-connected global network, it’s not hard to see why Don Papa isn’t just popular in the Philippines, but overseas as well. “We’re in 27 countries. In the US, we’re in New York, Massachusetts, and California. We’re also in Mexico, South Africa, and in Europe. Our business in Europe is quite big, actually, and of course, Asia Pacific. We’re opening more and more markets because we see the demand and we get so many inquiries. We’re in Thailand already. We’re growing surely. We’re very happy about it,” Larkins says. 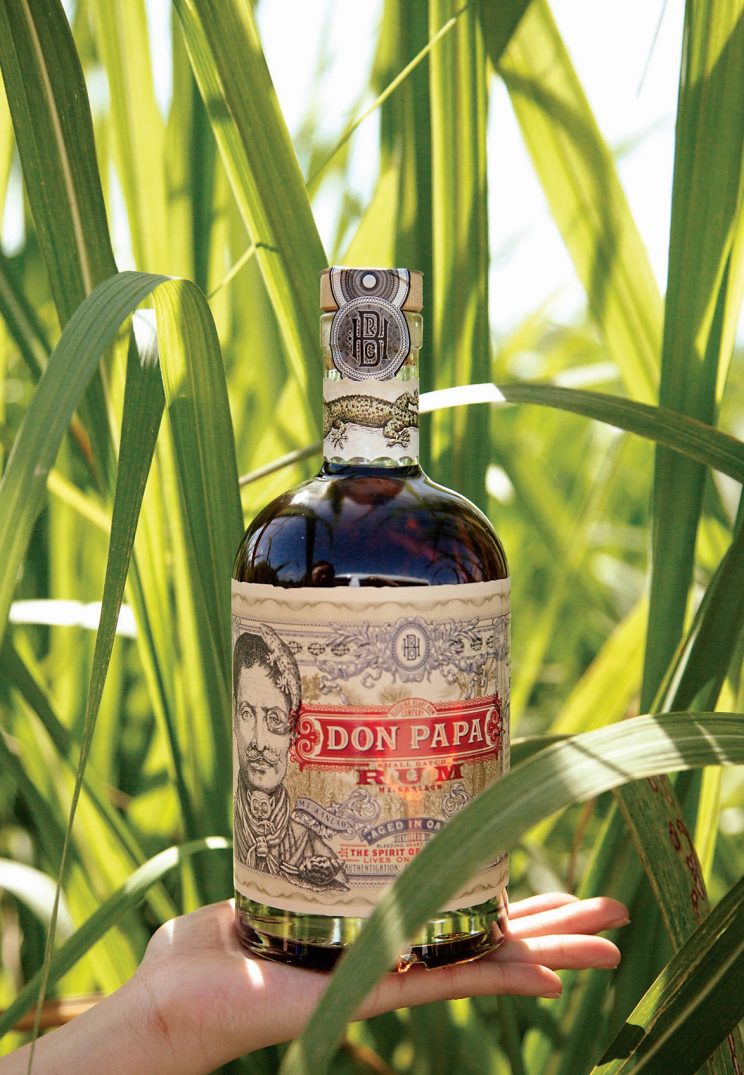 Don Papa Rum has garnered a following not just in the Philippines, but overseas as well.

The brand has been steadily gathering a global following. “They love it. They go crazy. We’ve seen this cult phenomenon. People have even tattooed the face of Don Papa on their arms and chests, and there’s really genuine love. It’s amazing,” Larkins says. “It’s a Filipino brand and people all over the world love it. I think the exoticness of it also adds to it.” 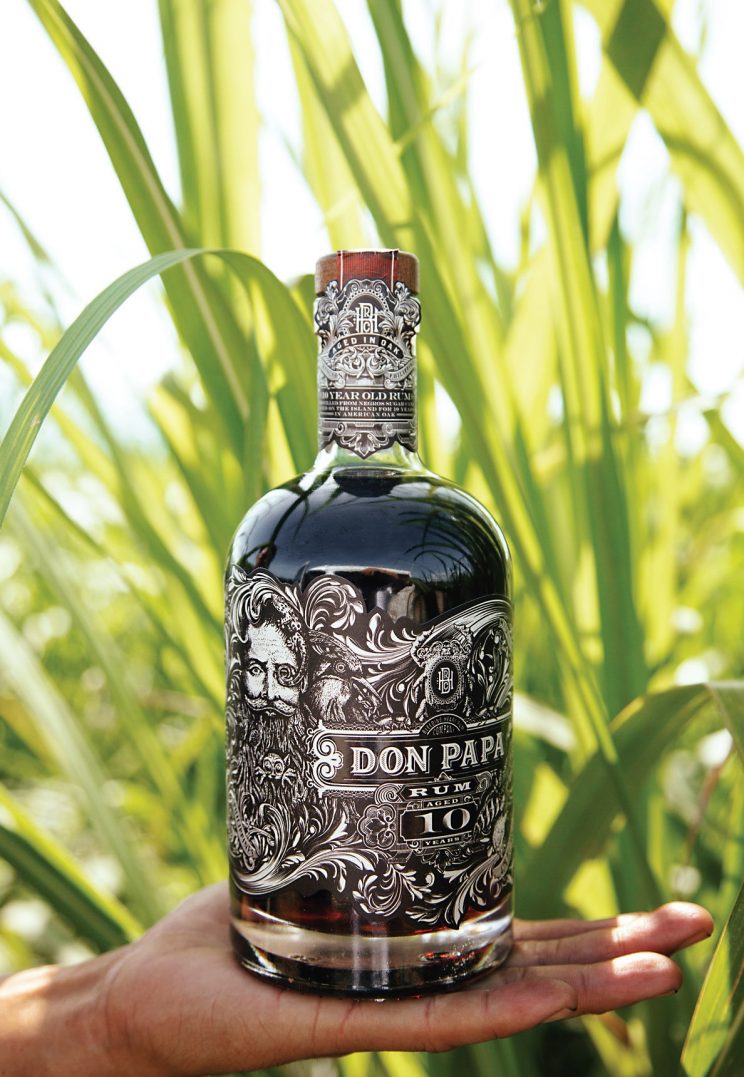 Don Papa 10, one of the brand’s expressions, has been aged in ex-bourbon barrels for 10 years.

Rum’s natural sweetness also makes it easy for people to relate it to different, non-alcoholic aspects of their lives. “We get different feedback from different consumers,” Larkins shares. “In Japan, when they taste Don Papa, they say oh my gosh, it reminds me of Yakult from when I was a child. There’s really that reminiscent aspect to the product. Some people even say that it tastes like umami. A lot of these anecdotal reminiscences from different consumers; it’s amazing.”

Filipinos tend to be insecure about what they can offer the world, so it’s always refreshing to find that a brand can hold its own on the global stage. “It goes back to us believing that Filipinos are able to bring such a premium product to the market. It doesn’t mean that it’s Filipino, it’s secondary. A lot of the people who love our brand are very impressed at the quality of the product,” Larkins says. “We’re going to keep building the brand, keeping it rich. We’re going to create more expressions. We just want to keep making new products.”

Don Papa was one of the first, if not most recognized brands of premium Filipino spirits, and many more have followed suit since. “I feel like we’ve opened the door,” Larkins says. “We have so many different [premium] brands now… It makes us proud because we’re Team Philippines. It’s amazing that we’re able to finally show the world the craftsmanship of Filipinos.”