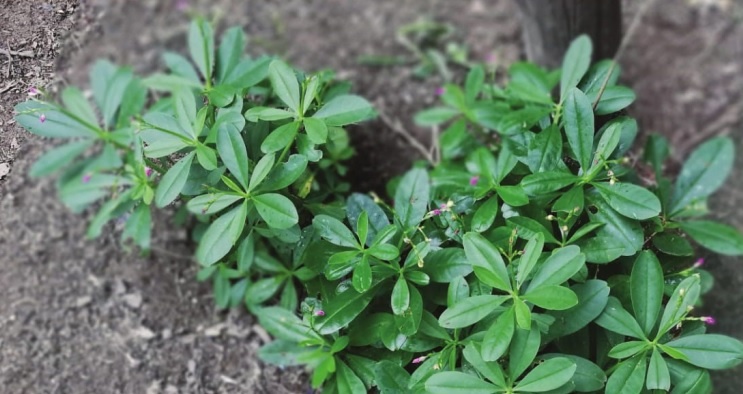 Featured photo from the pamphlet series 'Indigenous vegetables of the Philippines'

In backyards, gardens, or similar places, there’s usually a plant that resembles a weed in appearance. If given close attention, it can be evident that it’s not a weed at all.

This plant is locally known as talinum (Talinum triangulare), or Philippine spinach in English, and is actually an herb that can grow all year round and almost anywhere with humid to dry environments.

Although it looks like a weed, talinum can grow up to one meter tall without branches. If with branches, the plant looks shorter. It also has fleshy or succulent roots, stems, and leaves which allows it to absorb more water. However, the most distinct feature of talinum is its five-petal pink flowers which sprout from the tip of the shoot.

Being a succulent, the plant does not require constant irrigation, can withstand hot summer months unlike other leafy greens, and is available throughout the year.

The plant’s leaves are consumed as a vegetable, particularly in the north and in several areas in Visayas. These are harvested 40 to 55 days from planting to allow the plant to grow new shoots.

Fresh leaves can also be used in salads and sandwiches to give particular dishes a certain crunch from the plant’s juiciness.

Apart from being used in dishes, talinum also has ornamental uses. It is occasionally planted as a potted border plant or as an edging plant in landscaping because of its bright green foliage and dainty, pink flowers.

Moreover, the plant has a background in folk medicine that are known in regions both local and overseas. Crushed talinum leaves are known to relieve swelling, inflammation, and sores. Leaf extracts have also been proven to possess significant amounts of antioxidants.

Aside from these medicinal benefits, talinum is also known to regulate blood sugar levels and allegedly cure hypertension.

Agroforestry farm aims to produce quality wood in the Philippines