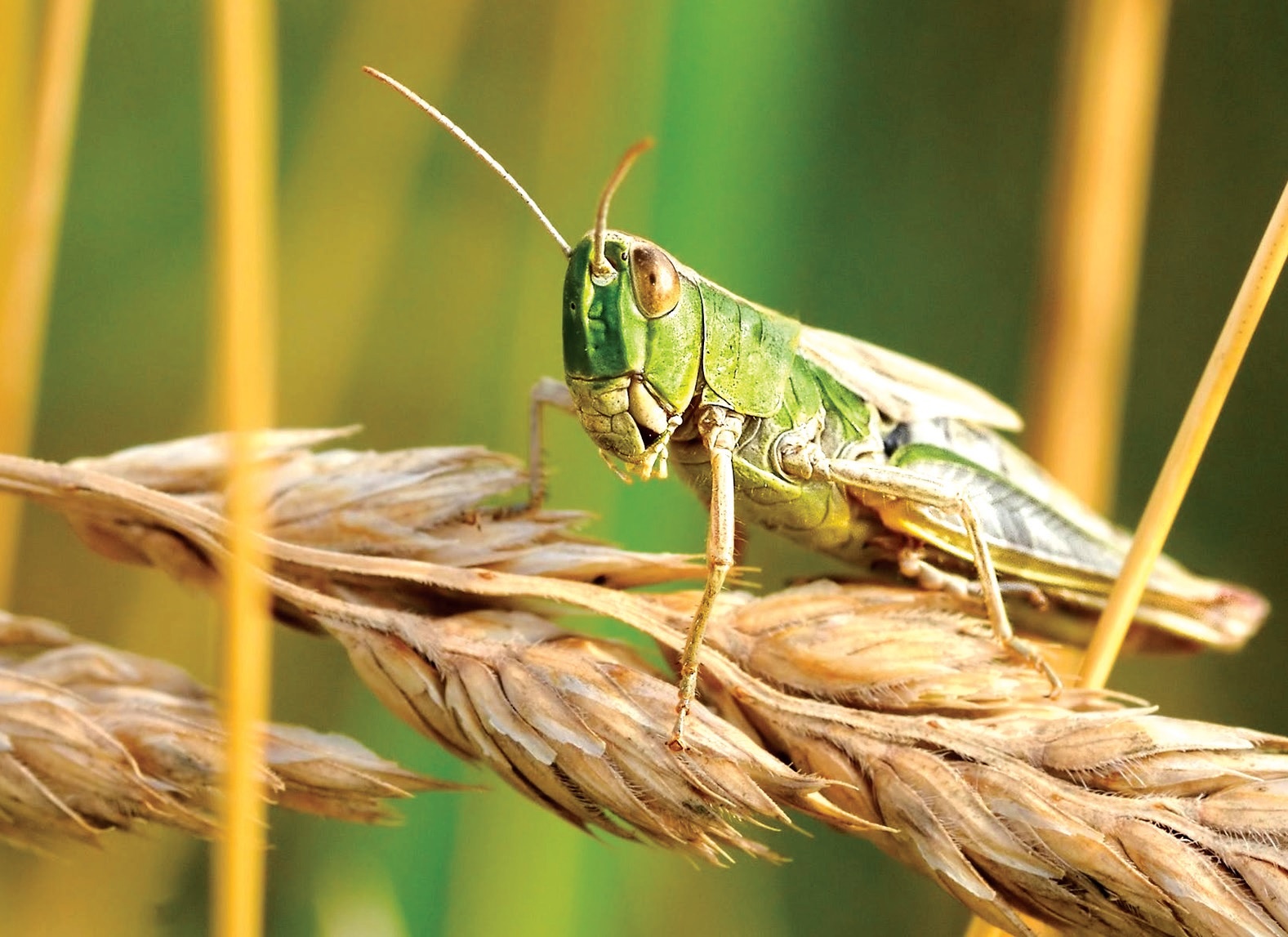 The Philippines is known for its rich biodiversity. Aside from flora and fauna, it is a home for approximately 21,000 insect species, with 70% of them endemic to the country. These insects play a significant role in the Philippine agricultural industry. Some are considered beneficial while some are branded as pests.

In the global arena, insects are a million-dollar industry, particularly in Asian countries like South Korea, Vietnam, Malaysia, Indonesia, and Thailand. In the Philippines, the industry is already established. However, it has not formally been introduced to the public, which is why it is not well-known.

In fact, edible insects are part of the menus of various restaurants. In different provinces in the country, it is a normal thing to consume insects on a daily basis. But insect consumption is not for everyone; despite its health benefits of low fats, high protein, and vitamin content, others will still hesitate to try them.

But for those who are brave enough; here are some ways on how to catch and cook local edible insects.

Beetle Larva (Uod)
The larva is the infant of various types of animals or insects like moth or beetle. When the larva develops, it will transform into the kind of insect it is. It usually looks like worms. However, the structure of worms will stay the same even after a complete life cycle. 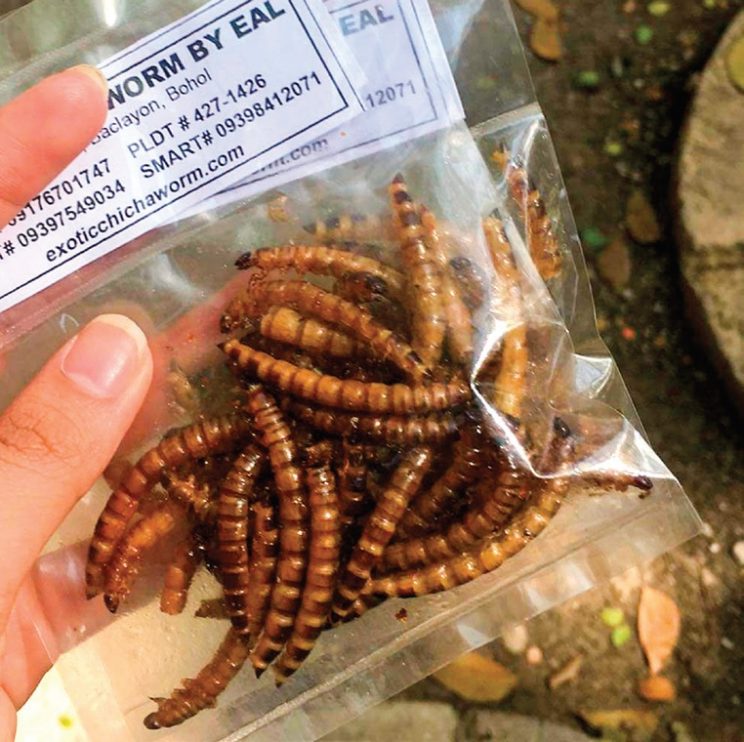 Chichaworms, a snack made from insects, can be bought in Bohol. (Photo by Alisa Lachica)

It is not surprising to find larva on this list because they are probably the most common edible insects that everybody knows about, but not everyone is willing to try. Rotten logs, leaves, or rice fields are their favorite spots to hide in. They are easy to catch because they cannot move swiftly.

Generally, the larva can be eaten uncooked. However, it is recommended to wash them with water to remove dirt and bacteria on their surface, but if you want to be more cautious it is better to cook them. Recipes vary, but frying them is a favorite, especially for pulutan.

In Tuguegarao City, the larva of beetles known as abaling is a popular food. It is very in demand, so much so that 1-kilogram will cost around R600. While in Bohol, chichaworm is a very popular exotic food made from deep-fried larva seasoned with sugar, salt, and chili powder.

Grasshoppers are plant-eating insects with long hind legs that support them for jumping. These hind legs also produce chirping-like sounds when rubbed together.

Farmers in the Philippines consider these insects pests. Although a few grasshoppers in a field are normal, if their population increases, they become a serious threat to cereal crops, vegetables, or even pastures because grasshoppers also consume feeds that are meant for plant-consuming livestock.

Grasshoppers can usually be found in the field. They move slowly early in the morning so they are easier to catch by hand. Using a butterfly net will make the job easier. Simply sweep the net across the top part of the tall grasses.

If you have enough grasshoppers, make sure to remove their wings and legs first before you cook them. You can roast them over flame, fry them in garlic and butter, or you can cook them however you want. These small green insects are a good source of protein.

June beetles, also known as June bugs, are leaf-eating insects that can fly swiftly. Before they become an actual beetle, they are white grubs that live in the soil and consume the roots of the plants. They are considered pests both in their larva and beetle form.

In the province of Nueva Ecija, farmers are usually bothered by beetles that eat their crops. During the night, when these insects are more active, farmers will capture them by hand as an act of revenge for destroying their crops, and as dinner as well. 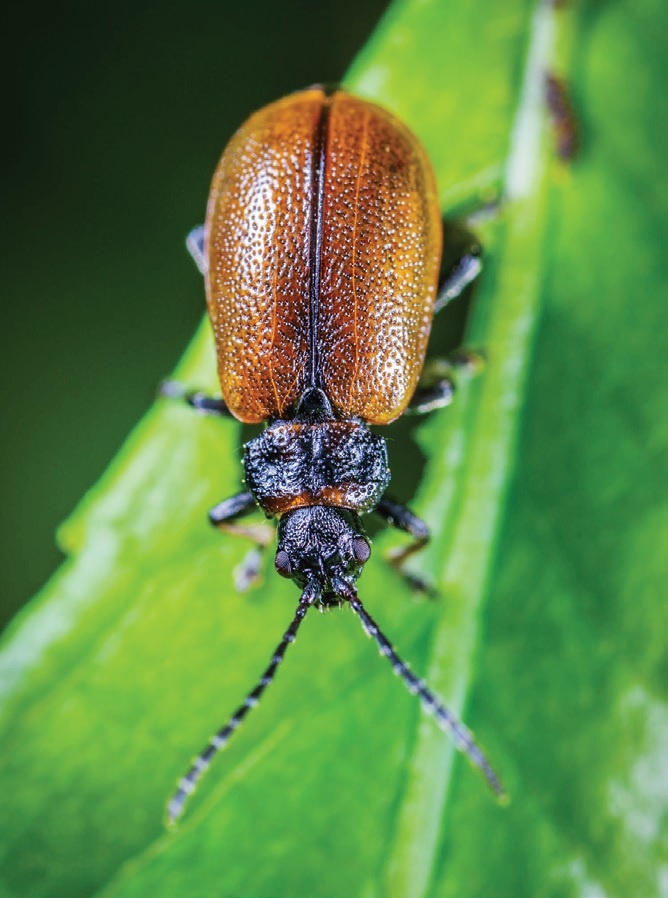 June beetles are a delicacy in Nueva Ecija.

Just like other edible insects, it is best to wash them and remove their feet and wings before cooking. It will depend on you what kind of dish you want to make from these beetles, which can include adobo. People in Nueva Ecija have their own delicacy made of beetles known as “Kinamatisang Salagubang.” Beetles are an excellent source of calcium, protein, and iron.

These tiny insects are distantly related to grasshoppers and are plant-eating as well. They can destroy not only crops but also lawns and gardens.

Crickets are usually found in fields, grasslands, or forests. In the province of Pampanga where there are a lot of rice fields, farmers have found a way to eliminate crickets, and that way is to eat them. 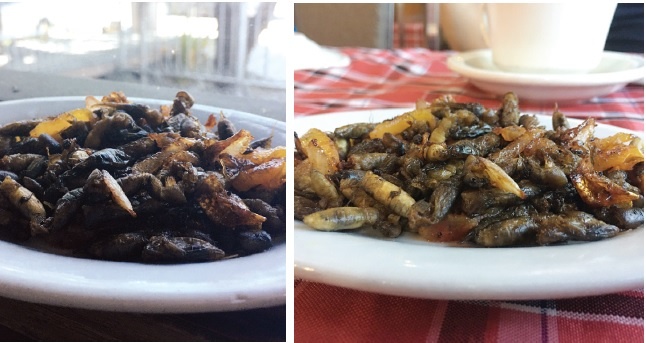 Crickets, also known as kamaru in Pampanga, is served in Everybody’s Cafe. Popular ways of preparing crickets include deep fried and as adobo.

To capture these insects, when the land is plowed, it is easier to find them in chunks of soil, pick them one by one, and put them in a container with vinegar to clean them off. After collecting the crickets, rinse them with water to remove the vinegar residue. Do this at least twice.

Remove the wings and legs before cooking them. There are various dishes that can be made with crickets, it will depend on you how you want it to be done. Favorite ways of cooking them include adobo and deep fried. Crickets are a great source of protein, vitamins, and minerals.

Insects like silkworms, crickets, beetles, and others might make your skin crawl, but these critters have been part of the human diet for thousands of years. In human history, insects have been answering the problem of famine and malnutrition in various countries due to their high-nutrient content of vitamin, amino acid, protein, zinc, calcium, and iron.

Although many people in the Philippines are already open to the idea of insect-eating, exposure is still insufficient to make the industry prosper.

In an interview with Poch Jorolan, owner of Everybody’s Cafe, a Pampanga based restaurant that is popularly known for their edible insect delicacy, kamaru (cricket) as well as the exotic food betute (frog), Jorolan expressed that the value of insects has a significant impact in the food and agricultural industry.

He asserts that if only concerned agencies will notice and support the potential business opportunities that insect species can provide, then there will be a way to reduce their damage to the agricultural industry and at the same time benefit Filipino farmers.