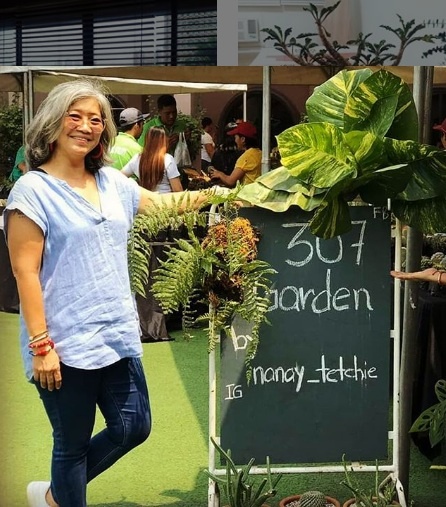 The Chinese sage, Confucius is well known for his worldly concerns. He once advised people to “choose a job you love, and you will never have to work a day in your life.” These words are one of the reasons why Tetchie Palaganas succeeded in both business and life.

56-year-old former accountant Tetchie Palaganas, more popularly known as Nanay Tetchie in her social media accounts, has been a plant enthusiast since 2007 when she decided to leave her job at the Bureau of Internal Revenue (BIR) to focus on her family’s business.

“Gardening has become part of my life. I grew up loving plants and gardening because my mother has a green thumb,” she shared. However, due to her hectic schedule, there was no available time to engage with her interest. After her resignation however, she gained the opportunity to rekindle her interest in gardening; the passion that was once lost was found again. 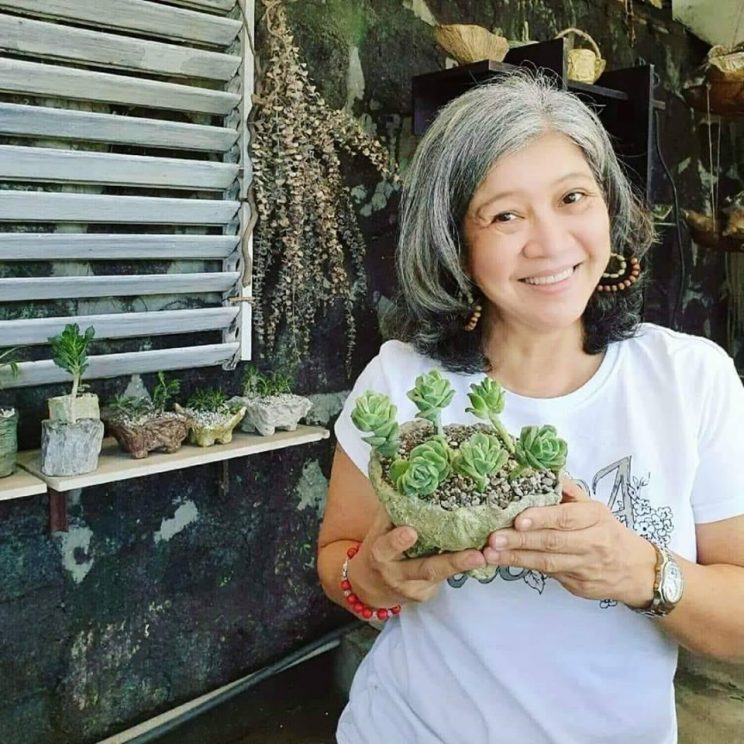 From hobby to business

For 28 years, the Palaganas family was successful in handling their family business, Cycle Gear- motorcycle and bicycle parts retail store. Now, Tetchie Palaganas has added to this her success in managing 307 Garden, which she considers not only as a source of livelihood, but also a lifestyle where she helps customers incorporate plants and their benefits into their daily lives. 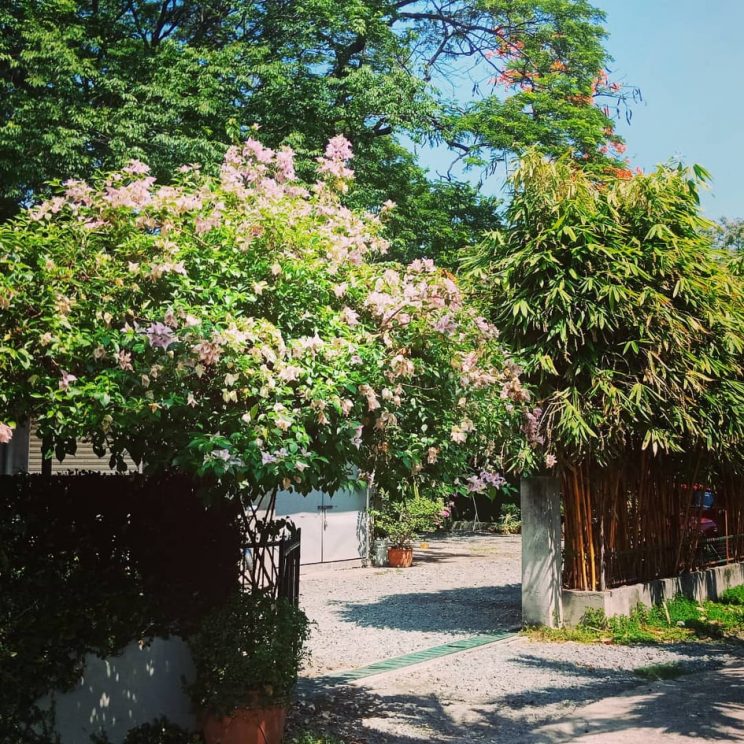 The 1,200 square meter facility was named after its location number at 307 Palaganas’ compound Malhacan Road, Malhacan, Meycauayan Bulacan. The 307 Garden used to be the family’s private space where Tetchie Palaganas’ plant collection was displayed. It is a home for various ornamental plants like cactus and succulents and trees such as star apple, narra, and acacia. Most plants in 307 Garden came from Benguet and Bulacan growers. Tetchie Palaganas also invests in some local artists’ plant pots craft. The garden is an ideal place for leisure activities, resting, and others.

“I am no plant expert yet but my love for it is why 307 Garden was born. Selling plants is my way of sharing my love for it,” she shared. Tetchie also added that it makes her happy to see her plants having a good time in their new homes. Moreover, it is also rewarding for her that she was able to inspire other people to go into gardening as well.

A private garden made available to public for a cause

It was in 2015 when Tetchie decided to open her private space, the garden located in their compound, to selected public participants such as local artists, restaurant owners, and bakers in order to raise financial funds for the benefit of the Emmaus House of Apostolate in Malolos, Bulacan. The event lasted for a day only, since it was a personal space of the family back then. 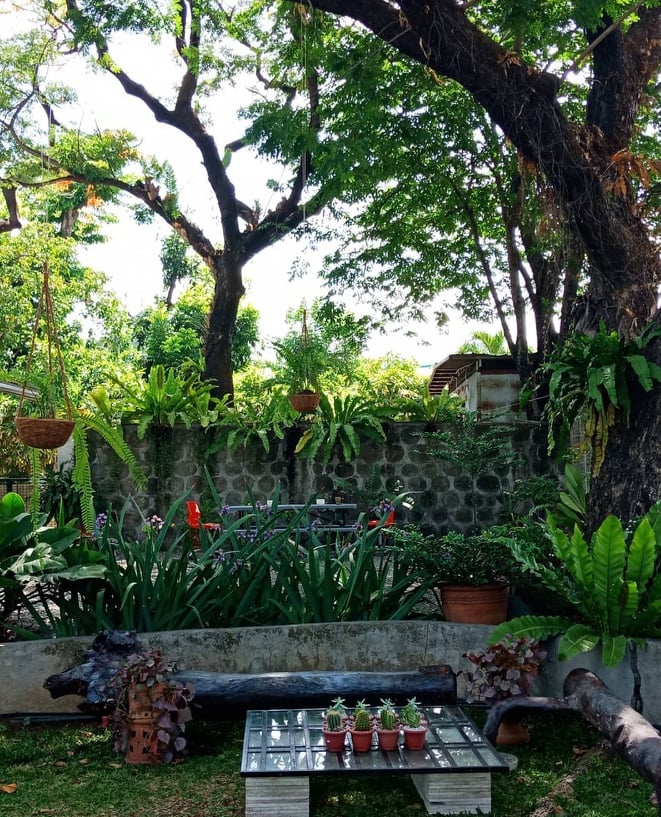 Work space for customer with recycled table and bench behind a century old acacia tree.

In 2017, Tetchie Palaganas turned her hobby into a business. She opened the private garden space once again. This time, to support the construction of the Carmelite Sister Monastery in Bukidnon. “This is the time I started to open my private space on a weekend basis which is Saturday and Sunday only, to continue supporting the construction of the convent,” Palaganas shared. She added that weekdays were dedicated for the maintenance of her 307 Garden.

Since it was only the beginning of her business, Palaganas encountered a lot of challenges. “There are so many challenges I encountered along the way. First, getting the best supplier; second, how to price the products; third, the technical know-how on how to take care of the plants properly; fourth, identifying the name of the plants, and etcetera,” she shared. However, with the help of various organizations, she was able to learn how the plant industry works.

In 2018, Tetchie Palaganas joined the National Cactus Society of the Philippines (NCSOPI). According to her, “The organization helps me a lot with all the challenges that I encountered during the first years that I started opening my private space to the public. I have been active in attending their meetings and workshops because I learned a lot from it.” 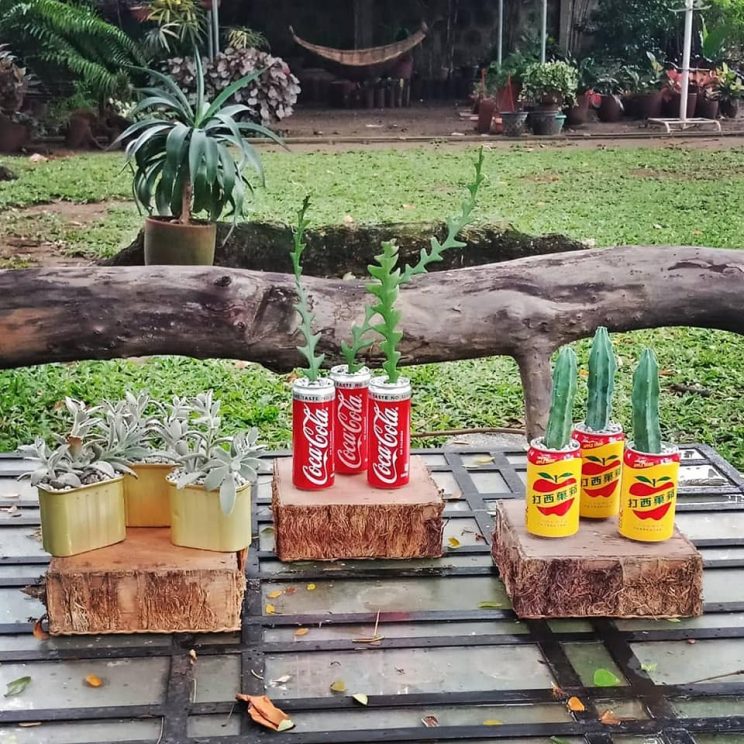 Recycled soda can planters in 307 Garden.

During the first years of Palaganas’ 307 Garden, her customers were just from her local community limited to her former schoolmates, neighbors, family, and friends. 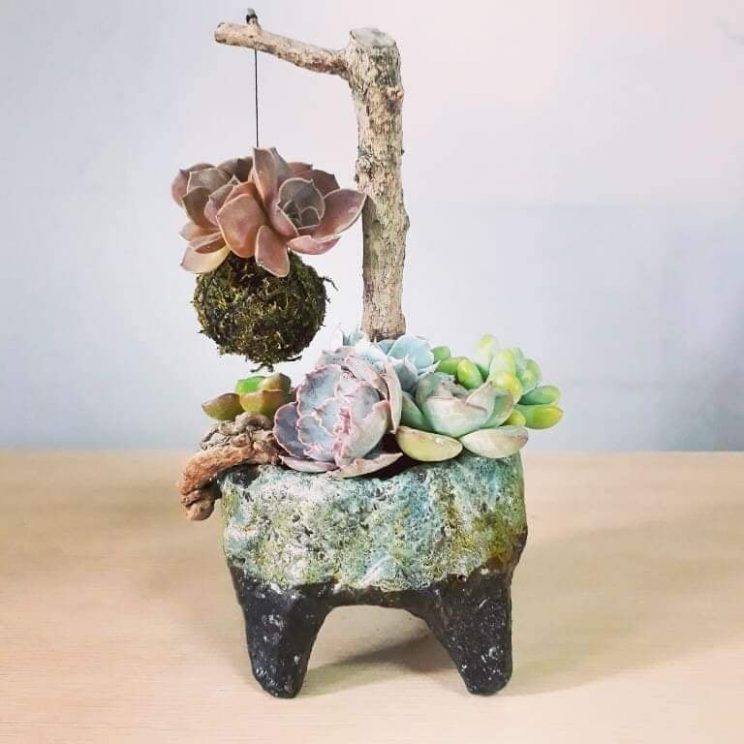 Kokedama art made by Tetchie Palaganas.

However, when she created social media accounts, the reach of her audience expanded. She was surprised to know that hobbyists from nearby towns and cities like Metro Manila, Laguna, Cavite, and others were following the official social media accounts of her 307 Garden.

The contents of her social media accounts were photos of her plant collections, self-made kokedama arts, and other plant related activities.

With all the knowledge she have learned from joining various seminars and competitions, Palaganas discovered her strength when it comes to gardening: it turns out that she is excellent in creating kokedama, a japanese art of growing plants in a moss ball.

From being a seminar attendee, Tetchie Palaganas became a seminar and workshop resource speaker who shares her knowledge in making kokedama art. Due to the wide range of her audience, she became popular in her craft. “Since then I was always invited for a kokedama workshop which is the part I truly enjoyed. I love sharing my crafts. Kokedama became somehow the face of 307 Garden,” she shared. 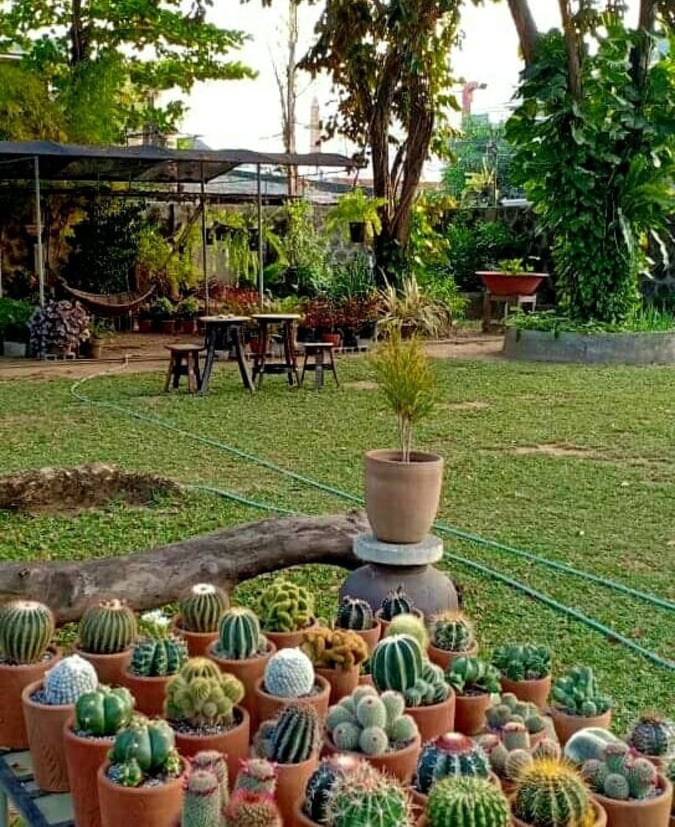 Space in 307 Garden where customers can place picnic mats and enjoy the serenity of the place.

Even though the garden started five years ago, having the past four years dedicated to Tetchie’s charity works, it was only in October of 2019 when the 307 Garden became an official business. Since Tetchie is already popular in the plant industry, joining bazaars and exhibits increase her profit by two to three times from the original capital. Events like such also adds popularity to the brand.

307 Garden still thrives during a pandemic

From its peak of success, 307 Garden still thrives despite the current pandemic. Although Tetchie admitted that just like all other businesses, the garden also suffered losses because of COVID19 crisis, but then, it did not stop her from continuing what she had started. 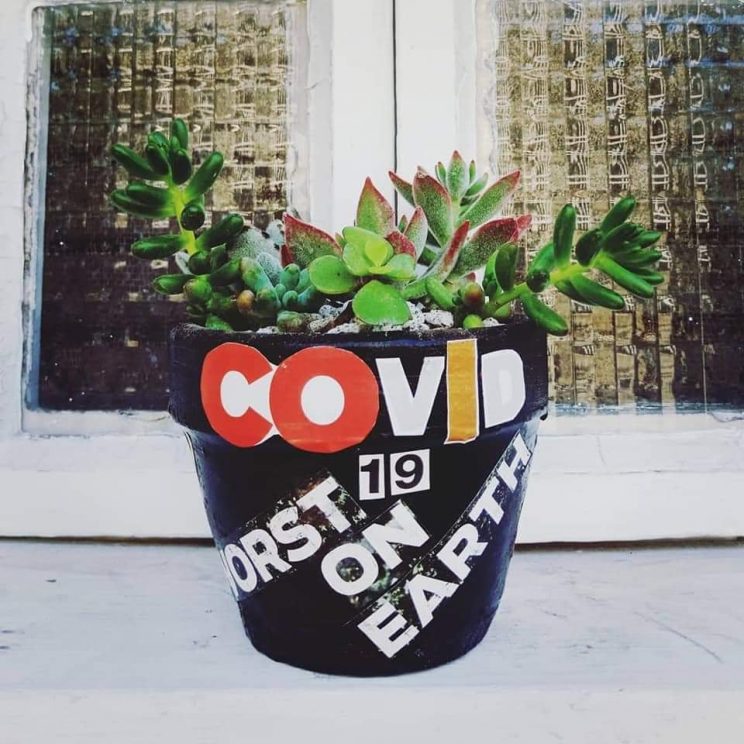 “The sales were slightly affected because of COVID19 lockdown but I take this opportunity to learn more about the plants, make some renovations, repotting, propagations and do more research,” she explained.

As a matter of fact, this coming July, there will be an expansion. According to Palaganas, “This July, we will launch our 307 Garden Backyard Grill and Cafe which was based on some suggestions from my customers.”

The 307 Backyard Grill and Cafe will offer a menu to the customers, which they can enjoy while appreciating the serenity of the place. This expansion will also adapt to the new normal setup of the country where social distancing will be strictly observed and there will be a small number of customers allowed in the garden.

Tetchie Palaganas is hoping for the success of this expansion. As she believes that one of the reasons why she is successful in her 307 Garden business is because she loves what she is doing. More than selling plants, Tetchie wants to become someone with a meaningful purpose in what she does, by promoting a lifestyle that includes plants; people can benefit from whether for business or just a simple interest that you want to engage in.

This appeared in Agriculture Monthly’s July to August 2020 issue.