Lubi-lubi (Ficus pseudopalma) is a shrub or small tree that might as well be considered the miniature version of the coconut palm. Its scientific name means “fake palm” while its local names such as “niyog-niyogan” hints at the resemblance between the two plants.

Also known as the Philippine fig, the lubi-lubi is endemic to Bicol, where they are commonly found in succession forests, backyards, and agricultural areas.

Similar to the coconut palm, lubi-lubi also has a single stem that is capable of producing multiple shoots when cut or damaged. From afar, lubi-lubi looks like a small coconut tree. However, the difference can be found in the leaves and fruits of the lubi-lubi. 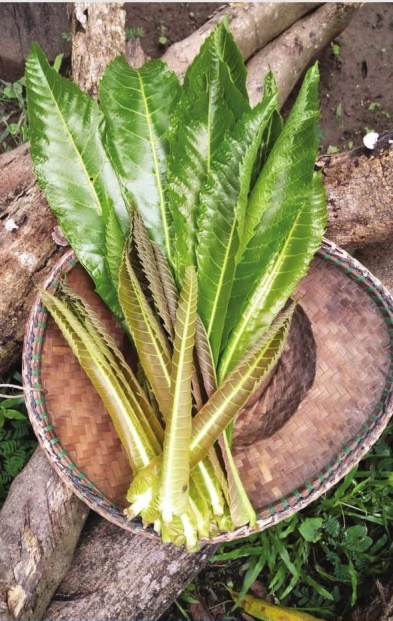 Lubi-lubi leaves are harvested and consumed as vegetables. These also have medicinal benefits.

The leaves of the fake palm look like boat paddles because they are wider at the end and thin towards the base or the stem. Its figs contain thousands of unisexual flowers that later develop into fruits inside the fig.

Additionally, the figs also serve as a nursery to fig wasps, who in turn help the lubi-lubi develop the seeds needed to propagate itself by pollinating its flowers.

Lubi-lubi usually grows from seeds but new plants can also be produced from cuttings or through marcotting or air layering.

Despite looking like the coconut palm, the lubi-lubi is primarily grown in the Philippines as a vegetable used in a wide array of dishes. In the Bicol region, particularly in Camarines Sur, lubi-lubi is grown alongside rice as a cash crop. The younger leaves are harvested and sold like most vegetables while its surplus is supplied to restaurants that offer a wide array of lubi-lubi dishes.

When harvesting the leaves of the fake palm, the entire apex consisting of the first to the fourth nodes are collected. Selective picking of young reddish leaves is recommended to avoid damage to the plant and for faster regeneration.

The milky sap or latex is said to cause skin allergy or eye irritation which is why people are warned against coming into contact with it. Climbing the shrub or bending its stem is also highly discouraged to prevent damage.

Other than being utilized as a vegetable, the lubi-lubi is also popular among faith healers and herbologists from certain areas since it’s an ingredient in traditional folk medicine.

According to local folklore, the extract of the fake palm taken from its leaves through boiling is used to treat hypertension, diabetes, kidney stones, and high cholesterol.

In the meantime, studies have also indicated that lubi-lubi has hypoglycemic, antibacterial, and antioxidant properties.

Lastly, another similarity that lubi-lubi has with the coconut palm is both can be enjoyed year-round.

The information written above was taken from the “Indigenous vegetables of the Philippines” which is a project funded and coordinated by the Philippine Council for Agriculture, Aquatic and Natural Resources Development of the Department of Science and Technology ( DOST-PCAARD) and implemented by the Institute of Crop Science (ICropS), College of Agriculture and Food Science, University of the Philippines Los Baños (UPLB) in 2018 to 2019.

Barangay chairman in Tanay grows strawberries in his greenhouse