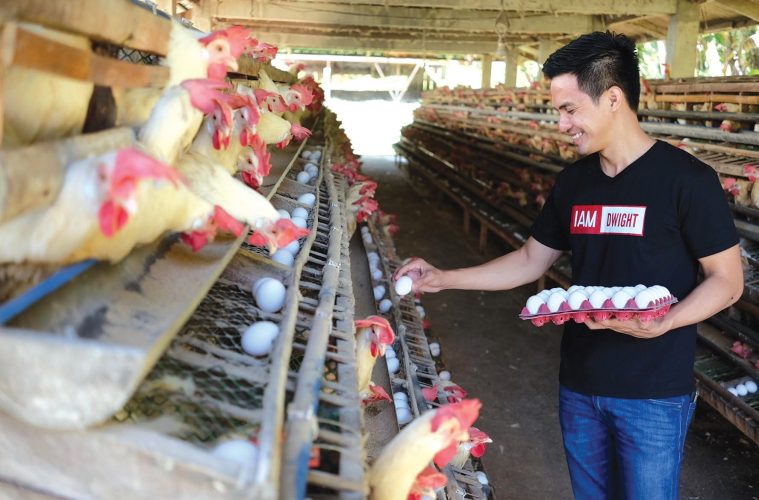 When Albert Dwight Tamayo, 31, started poultry layer farming, he didn’t expect that part of his success would come from the internet. Now, Dwight Tamayo’s YouTube channel is one of the most popular channels in the local agriculture industry. It has over 37,000 subscribers and its videos get as high as 137,000 views.

Before he ventured into egg farming, Tamayo was a registered nurse. But after graduating, he realized that there weren’t enough opportunities in the field. He decided to return to his hometown of Palanas, Masbate to start his own agricultural business.

Tamayo chose to put up a layer poultry farm because he was inspired by a family friend’s success in the business. “[He] was able to provide a good life for his family,” he says.

Layers are chickens raised specifically to lay eggs for commercial production. They are raised from the time they are chicks and usually start laying when they’re around 18-19 weeks old. 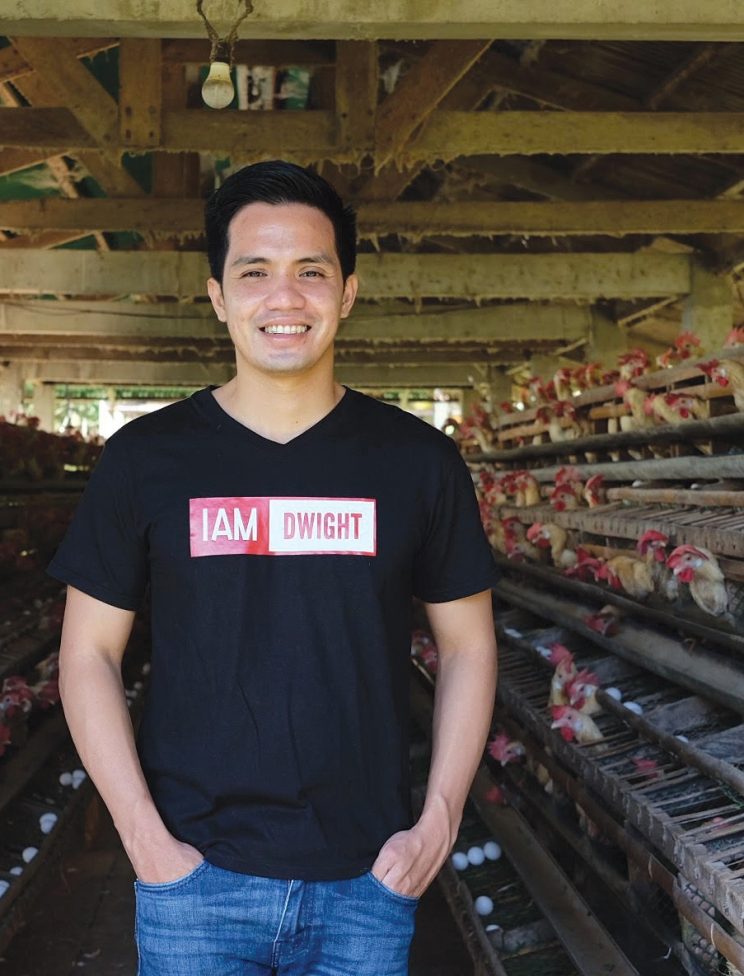 “When I was starting, I didn’t have enough knowledge or strong background in raising layer chicken but that challenged me to learn more about this business. The easiest part was selling the products since the demand was very high in our province,” Tamayo said.

Tamayo converted an existing building that used to house his grandmother’s piggery into his first layer cages. He started with 200 chicks (with each chick costing around P25-30) because at the time, he didn’t know that one could buy ready-to-lay (RTL) hens.

The farm now spans half a hectare and contains five structures comprising four layer buildings and one grower building, where future layers are raised. Each layer building measures 2000 sq.ft and can accommodate 2000 heads. Their eggs are sold to grocery stores, bakeshops, and distributors.

Part of Tamayo’s success as a farmer comes from his tendency to see every new situation as an opportunity to learn. “When I was starting, I didn’t have enough knowledge or strong background in raising layer chicken but that challenged me to learn more about this business. The easiest part was selling the products since the demand was very high in our province,” he says.

He applied this same attitude when starting out as a vlogger, and now, just two years after he started his account on YouTube, it has obviously paid off.

It was Tamayo’s then fiancee now wife Christine May, also a vlogger, who persuaded him to try his hand at the craft. “Since I love sharing my ideas to other people, my wife told me to share my knowledge about the layer poultry business,” Tamayo says.

He opened an account on the video sharing platform YouTube in April 2018 and started earning from it in November of that year.

While he says that it wasn’t hard to make the videos, “the most challenging part in vlogging is to create quality contents and having constant viewers.” 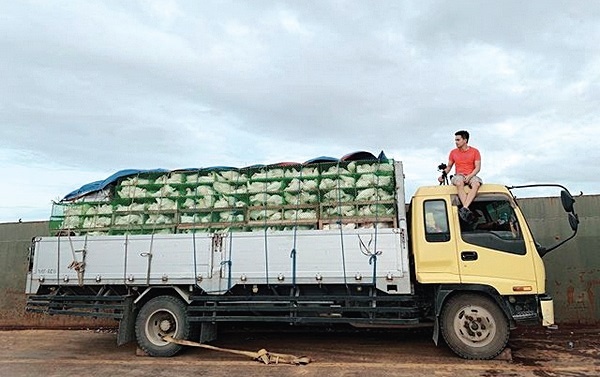 Becoming a successful vlogger has enabled Dwight Tamayo to expand his business to supplying and setting up poultry businesses for customers all over Visayas and Mindanao.

Tamayo’s videos are short, easy to digest, and packed with information. He discusses everything there is to know about the poultry layer business, from building structures for the chickens to raising the chicks to classifying eggs, often using his own experiences as a poultry farmer as examples.

In the video “Magkano ang Puhunan/ Business Capital ng Layer Poultry Farming sa Pilipinas” (How much business capital is needed to start a layer poultry business in the Philippines) which has garnered more than 500,000 views, he explains the difference between starting with chicks and starting with RTLs, why it’s a good idea to use quality materials to build housing, and also includes a breakdown of how much everything will initially cost (about P100,000 for 100 RTLs, including food and housing). He also doesn’t sugarcoat, as he tells viewers that folks who want to go into the poultry business that they have to be prepared “financially, physically, end emotionally,” adding that going into agribusiness will entail some physical labor, especially when starting out.

“Vlogging opened a lot of opportunities in my poultry business because through my platform, I was able to convey my message and reach clients nationwide and even worldwide,” he says.

It’s even allowed him to expand his business. “When I started YouTube there were lots of requests from my viewers if I could help them provide assistance to set up their own farms. That’s why I decided to extend my service because of my advocacy to help others build their own business,” he says.

He now supplies RTLs and housing materials and helps set up poultry farms all over Visayas and Mindanao. His deliveries are likewise chronicled in his YouTube channel, where viewers join him as he traverses the nautical highway on a RoRo (roll-on/roll-off ship), and where he takes them through the challenge of a truck breakdown and the joy of a client receiving their order.

Even then, he didn’t think he could make it big as a vlogger, that is until he was selected as one of 12 winners of YouTube NextUp Manila 2019. “I decided to join the creator camp because I want to learn more about content making and enhance the quality of my videos. It was a life-changing experience,” he says. “We, the YouTube NextUp Winners have been receiving mentorship since the camp. They always make sure to monitor and guide us in growing our channel by conducting meetings, providing strategic account management support and discussing ideas to create meaningful content.”

Tamayo has been very open about his vlogging journey. In the video “Magkano ang First YouTube Sweldo Ko” (How much my first YouTube salary was), Tamayo takes viewers with him as he withdraws his first earnings from the video sharing platform. It also includes a breakdown of the site’s monetization process that’s easy to understand. He reported that his income from November 2018 to June 2019 was US$583.79, or a little under P29,500.

More than the extra money, vlogging has enabled Tamayo to inspire other people to go into the poultry business. He’s even been approached at the mall by people who’ve put up their own poultry farms because they watch his channel! “The best part about vlogging is being able to express your ideas and self as well, helping other people realize their own dreams and being able to earn from it,” he says.

His family has been supportive of his vlogging. “My wife has been the biggest part of my vlogging career because she helped me start with my channel in terms of production gears, technicalities and coming up with a niche. Also, I have the strongest support system-my loving family who’s always with me through my ups and downs,” he says.

Sometimes, people on the internet can get negative, something that doesn’t faze Tamayo. “I just don’t mind negative people and thoughts. Rather I spread positivity through my platform,” he says.

Of course, he doesn’t spend all his time in front of the camera. “I love watching Netflix movies and taking care of my reptile pets. I also love spending time outdoors and with nature,” he says.

His future plans include setting up an integrated natural farm “so I can include various areas of agriculture in my future videos.” He’s already planted dragon fruit and mangoes and has documented their harvests on his channel.

He loves both being a farmer and vlogger, as both fulfill different things within him. “Vlogging satisfies me when people tell me that they are inspired to do their own poultry business because of my videos,” he says. “Farming satisfies me every time I produce good quality products and contribute to food sustainability in our community and at the same time create jobs for people.”