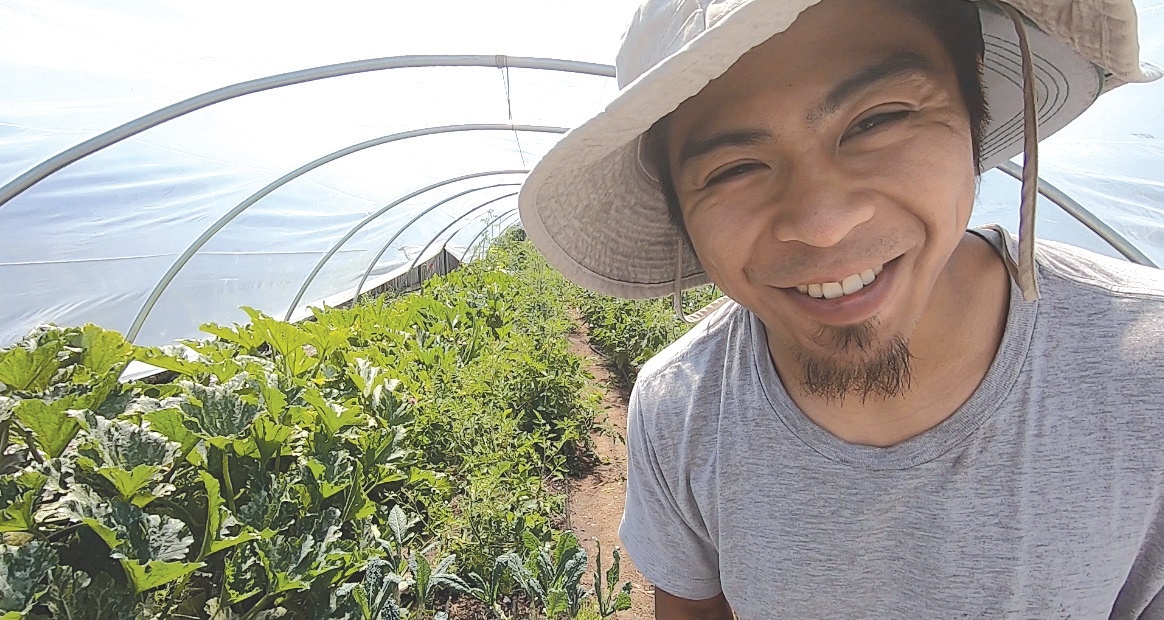 The Philippines may be an agricultural country, but farming isn’t the industry one expects Filipinos who’ve grown up overseas to get into. Roderick Camarce, 36, is a Filipino American who is changing that notion.

Camarce was born in Bremerton, Washington in the USA. His dad is from Cavite while his mom hails from Bulacan. “I’m Tagalog,” he says proudly.

He started Ridgetop Urban Farms in 2017 in the backyard of one of his parents’ rental properties. “It has a history of being a farm in the early 70s,” he says.

Part of his interest in agriculture came from having lived in the Philippines for four years as a musician, playing for acts such as Ely Buendia, Jess Conelly, Kat Agarrado, and Ourselves the Elves. Before that, he worked full time in the corporate world in the USA. “I went back to the States and I was trying to figure out what I wanted to do and I didn’t want to work in the corporate world anymore. I did that for five years. I just didn’t want to live that lifestyle again,” he says.

Camarce belongs to America’s hustle culture, what Filipinos know as ‘diskarte,’ something that he says got from his dad. “My dad comes from a not-so-wealthy background but he was one of those stories where he really came up from the American dream. He’s just full of diskarte and that’s where I come from,” Camarce says. “What got me into farming is I always go against what’s going on. It’s kind of uncommon to be a farmer today… I saw an opportunity and now I’m… trying to go for it.”

The backyard his farm is located on measures 6000 sqft (557.41 sqm). He researched on SPIN (Small Plot INtensive) farming, a natural farming system developed by Canadian Wally Satzewich that aims to produce high crop yield in a small space and is currently using its principles to grow food.

Camarce started planting on 800 sq ft (74.32 sqm) because “because I just wanted to start and I wanted to see if people would actually buy it.” The first vegetables he grew were salad greens— arugula, red Russian kale, spinach, lettuces—and edible flowers. Soon, he was planting on 2000 sqft (185.8 sqm) and this year, he’s started using all 6000 sqft.

From garden to urban farm

Part of Ridgetop’s journey involved transforming a grass lawn into a farm. Camarce started by taking out the grass that originally sprawled the backyard, then tilled it. “I’m [on] a no-till system right now but I started tilling that 800 sq.ft because I just wanted production fast,” he says, adding that this was before he learned “about soil building and keeping carbon inside the soil.”

He added amendments like finished compost, pelletized chicken manure, feather meal and bone meal, all of which he tilled in. “I broadforked so I can aerate the soil without tilling more,” he adds. “Broadforking is [using] a fork, you dig deep into the soil but instead of inverting it, you’re aerating it. It’s like using a tiller without turning over the soil so you’re not disturbing the soil structure….”

Later, he would prepare the land by tarping, or laying tarpaulin over the grass for six months or more to deprive them of sunlight and eventually kill them. “Instead of tilling, I just tarped it. Six to eight months later, I took off the tarp, the grass was dead, then I broadforked, added my amendments, then bed-shaped using a rake and a small hand tiller,” he shares. “The less tiling you do, the less weeds you’ll have in the end because weeds will not be able to compete because you have so much carbon in the soil from all the other plants.”

He buys the compost from a neighbor but is hoping to develop a closed-loop system where he makes his own in the future.

He plants in rows by class: brassica (ex. broccoli), allium (ex. scallions), root vegetable (ex. beets), salad green (ex. lettuce), then nightshade (ex. tomatoes). “I really just try to keep the root system from the last crop in the soil because it’s very good for worms and to feed the soil,” he says.

What he plants is determined by what’s in demand. “I really crop plan according to sales and clientele,” he says. “Like. a school that I sell to really likes root crops. I sell a Japanese turnip called hakurei turnip. For some reason, the kids like it,” he says.

He chose natural farming simply because it was cheaper. “From a business standpoint, all I had to do was buy organic compost and chicken fertilizer that’s also organic and I could get started. The barrier to entry is very low in vegetable farming,” he says.

“Organic just sounded better from a marketing standpoint, when I say that I don’t spray anything and I don’t use pesticides, people are always… really glad.”

He’s still experimenting with his farming technique. “I’m not totally convinced (on no tilling) yet. I’m just trying to go based on principle and what my goals are. I’m just trying to understand how to feed my soil in the best way because I don’t want soil disease because that’s a huge problem where I am when you don’t rotate,” he says.

Even in the USA, small scale farming isn’t known as a lucrative business. “When I did my market research, [I noticed that] 90% of farmers are actually poor. Whether they’re in the Philippines or whether they’re in the United States. The biggest problem is the youth are not taking the role of the farmer, and it goes across the board, whether it’s in the first world or the third world,” Camarce says.

Camarce, who has a background in IT (information technology), still relies on other sources of income aside from the farm. “It’s been a big transition for me being a vegetable farmer because I’m also a carpenter, a real estate agent, an entrepreneur, and a musician,” he says.

His regular clientele include one school, about four restaurants, two online sites, and two farmers’ markets. At the time of the interview before the COVID-19 crisis, he had plans to open his first on-site farm stand.

At the moment, he has one employee though sometimes, the tenants of the house that the backyard belongs to, former hog farmers from Banawe and Abra who have migrated to the USA, help out for fun.

Part of his strategy is to differentiate himself from other farmers, many of them with bigger plots of land. This is where diskarte comes in. Not only does he sell freshly picked vegetables, he also sells roasting packs (“I make a roasting pack which is like carrots, radishes, turnips, beets, and sometimes potatoes… It’s the fastest way somebody can take the whole thing, put it into a pan, put olive oil, salt, pepper, and lemon, and put it in an oven”), salad packs, do-it-yourself salve kits, medicinal flowers, plant cuttings, and other products.

“My whole name of the game is packaged deals and I copied that from the palengke (market) in Guadalupe because they sell pinakbet packs where everything is included-alabasa, okra, sitaw, whatever, and you just empty that into a wok, gisa (sauté), and you’re good to go,” he says.

He’s also trying out CSA (community supported agriculture), where customers can pre-pay to ‘subscribe’ to his farm’s harvest per season. “I think that a lot of farmers in general, they’re so used to copying each other or not really looking at the bigger picture,” he says. “I’m always trying to think of something to differentiate me to have a competitive advantage.”

Farming, and then some

His journey wasn’t easy. For one thing, he had to convince his parents that he was doing the right thing. “My parents… were kind of disappointed that they left an agricultural country for a better opportunity in the US, [only to have] their son spent four years in [said] agricultural country where the farmers are suffering [then] come back to the first world country and become [a] farmer,” he says. “But then they started to see the benefits.”

He hopes to be able to convert the house on the property into a nursing home where patients can enjoy food made with ingredients freshly picked from the backyard farm. “The patients will not only have 24 hour care, they’ll be eating the vegetables, they’ll be seeing the vegetables grown, and they’ll be interacting with the community who buys from me,” he says.

Community is central to his plans. “My goal this year is to be a lot more community-oriented where I invite my local community to do bayanihan. It’s the concept of it. People helping out but also having local farmers do demonstrations like herbalism or organic farming or things like that,” he says. “It’s really just to get a community together, to get their hands dirty and to understand the context that we’re doing and keep the activity going and to keep the interest of people and to make that relationship with food and farmers.”

He wants to be able to retire in the Philippines, as a farmer, of course. Right now, he hopes that more young people will consider a career in agriculture, especially with the wealth of technology at everyone’s fingertips. “The young farmer today can use the internet, can use social media or design programs to market themselves in a different way and to find logistical solutions to creating access,” he says. “…the most important thing is thinking of it as a business, but holding the values of sustainable agriculture…”