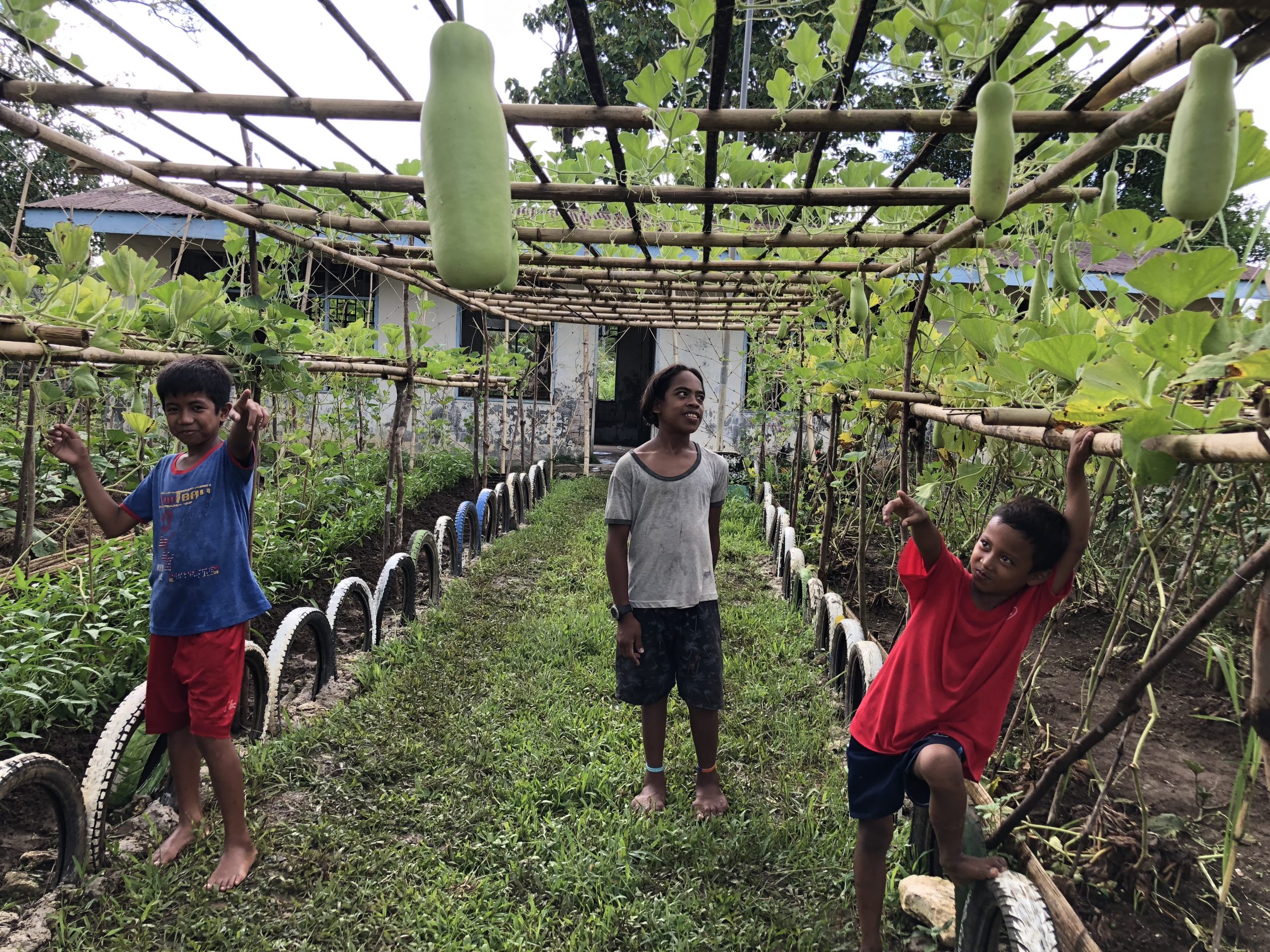 From left to right Fregie Espejon, Justine Convicto and Nico Nogalo wanted to become successful and professional farmers in the future. This photo was taken in their garden at Magsaysay Elementary School in General Luna, Siargao Island last June 16, 2020. (Photo by Roel N. Catoto)

The three children from Sitio Dao in the remote village of Magsaysay in General Luna, Siargao Island, cheerfully nurture and nourish a variety of vegetables they have planted at a garden beside their school.

They volunteer at the communal farming organization of the far-flung village and see the big opportunity of producing locally grown food.

“Nico plants vegetables at home, and when harvest comes, he sells it in the neighborhood. That’s how he earns his own money,” said Meriam Jabines, head teacher of Magsaysay Elementary School.

Jabines heads the communal garden organization of the village which is among the 30 farm community farm organizations of Hardin Ng Pagbabago, a community-driven initiative of the local stakeholders.

She is glad that the small garden at the school made a bumper harvest mostly toiled by female members of the Parents-Teachers Association of Magsaysay Elementary School.

Meanwhile, Justine and Fregie both want to become professional farmers,too, as they see big opportunities in the future.

“Everyone left farming here, and no one produces food locally anymore, so it will be good for us,” they said.

“Some of our friends want to go abroad or work in the resorts and restaurants,” the duo said shyly, adding that they want to produce food locally to sustain themselves, and when a disaster like this pandemic comes, we can help produce food for the hungry people,” Justine and Fregie said in vernacular.

The surfing capital was an agricultural area back in the early 2000’s. Most people relied on coconut and marine products, but it was surpassed by tourism as its main economic driver as it drew thousands of tourists from around the world, according to the late mayor Jaime P. Rusillon.

The tourism boom drives locals to become tricycle and motorcycle drivers, boat operators, resort workers, surfing instructors, bar and construction workers, and other multipliers from the lucrative industry, leaving the agricultural farm lands on the island idle for a long period of time.

Capt. Wise Panuelos, police chief of General Luna Police Station, who spearheads the Hardin Ng Pagbabago, a community-driven initiative to promote peace and sustainability through organic farming, is stunned by the kids’ dreams and aspirations.

“That’s what I want, future farmers,” he said.

Panuelos said the rapid development had increased its agricultural supply needs coming from the mainland and neighbouring provinces to as high as 97 percent, according to research studies.

Prices of basic spices alone significantly is higher on the island.

Panuelos said the island has remained dependent on agricultural supply needs from the mainland and neighbouring provinces.

At the public market here ginger stands at P250 per kilo, onion bulbs at P150 per kilo, and garlic at P180 per kilo. All these basic spices are not from island.

Panuelos said these kids hold so much promise to bring stable and cheap prices for the locals.

The farm organization in this village has expanded site as a generous land owner offers its land for community farm.

Magsasay village captain Alex Gemparo is excited about this development as he is mobilizing its people to work in their new farm site.

Residents here are fired up to the farm sites as they have been witnesses to the bumper harvest at the small garden in school.

Last Tuesday, June 16, farm workers and barangay officials had a capacity building workshop held at the said school together with Siargao Environmental Awareness Movement and Hardin Ng Pagbabago to strengthen the farm organization at the village.

As for the kids, upon hearing of the new farm site in the village, they are leaping with joy and excitement about their green gold in the coming days.