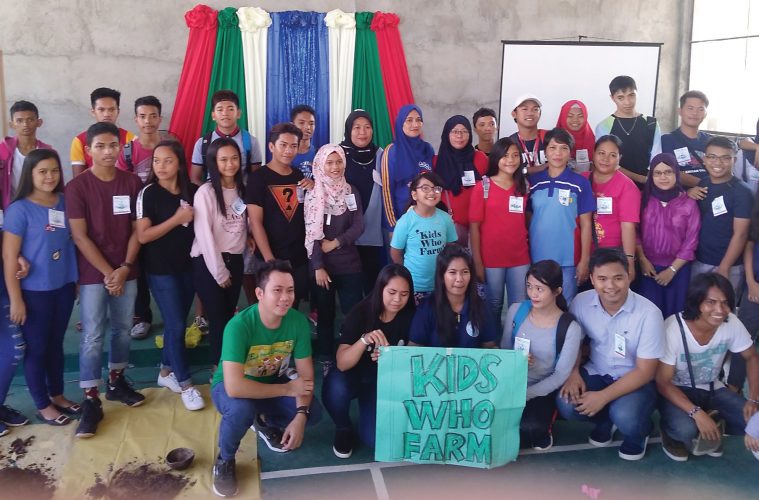 There’s a worry that not enough young people are showing interest in agriculture. This father and daughter team from Zamboanga City hopes to change that.

Muneer Hinay and his nine-year-old daughter Raaina co-founded Kids Who Farm (KWF), which Muneer explains is a “food production plus education advocacy initiative which aims to teach kids and women farming and the importance of food production. It’s our way of contributing to the education part of building the next generation of food producers.”

Muneer, who hails from Butuan, relocated to Zamboanga, where his Tausug wife, who is a human rights lawyer, is from. He has a background in social work and is currently the project manager of the World Wide Fund for Nature’s (WWF) Sustainable Food Systems Program, which aims to provide food security and decent livelihoods to marginalized communities by means of agriculture. He says that the idea had been germinating in his head for a while because he’s seen firsthand the gaps in the agriculture industry. “There’s a number of new technologies out there that you can introduce… to small farmers, but the challenge is… limited access to information. And (farmers are) really getting older,” Muneer explains. “The idea of Kids Who Farm is really about transferring these technologies to the young ones who can appreciate or are interested to learn about farming technologies and food production.” 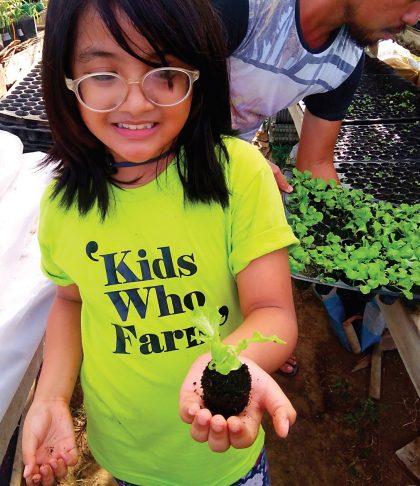 KWF co-founder, Raaina Hinay wanted to save her school garden from being turned into a building. 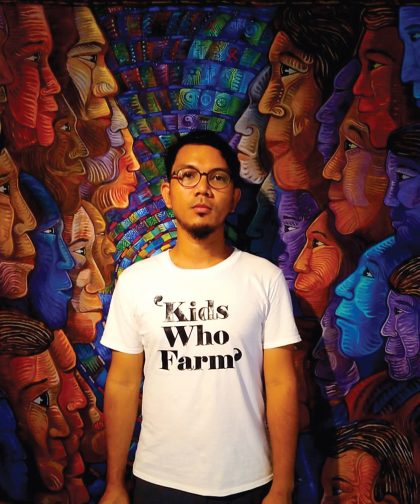 KWF co-founder Muneer Hinay used his passion for food security and background in development work to start Kids Who Farm with his daughter.

But the project really came to life when Raaina approached him one day with news that the garden of the public school she studied in was going to be converted into a building and that she wanted to save it. “She wanted to talk to the principal. I told her, ‘Why not let’s write a letter but not as your name but as a project?’” Muneer says. “We named the project ‘Kids Who Farm.’ I wrote a letter, she gave it to the principal, I talked to the principal, we agreed that we’re going to do a joint project to create a micro-farm in their school, and that’s the current project that we’re doing right now in Zamboanga.”

They are now in the process of raising funds to convert the small school garden of Catalina Vda. De Jalon Memorial School (CVDJMS) in Brgy. Tumaga, Zamboanga City into a microfarm. “We didn’t want to make this a typical (school garden) where they grow food for feeding then neglect it during vacation,” Muneer explains in Taglish. “I realized that school garden areas are vast lands that can be used for actual food production within the cities. So technically, the goal of Kids Who Farm is to venture as a social enterprise. I don’t need to buy lands. I just need to help the schools develop their microfarms, involve the students (and) the teachers, and create a setup where I can market these commodities through a consolidation, link them to a buyer, and plow back income into the school so that they can fund feeding activities, ensure that the microfarm works well and also provide some monetary incentive to the kids.”

He adds that having experienced the school garden process firsthand, he’s realized the important role earning money from a harvest can have on the morale of student gardeners, and can help encourage them to see agriculture in a favorable light. “I had school gardening in elementary but I never (took home) my harvest or got paid for it so I figured that if you’re going to give kids (a way to get) an allowance, they won’t drop out. They’re going to work in the school garden, make it do well, and study. That’s the theory of change behind Kids Who Farm.

Kids Who Farm formally started on February 26, 2019, on Raaina’s 9th birthday. “My kid made the vision statement of Kids Who Farm. She said, let’s make it fun and easy. That’s how we do it, so everything is guided by that principle,” Muneer says. Aside from explaining how plants grow, there are hands-on projects such as making a self-irrigating bottle from waste plastic bottles to help people get more involved. 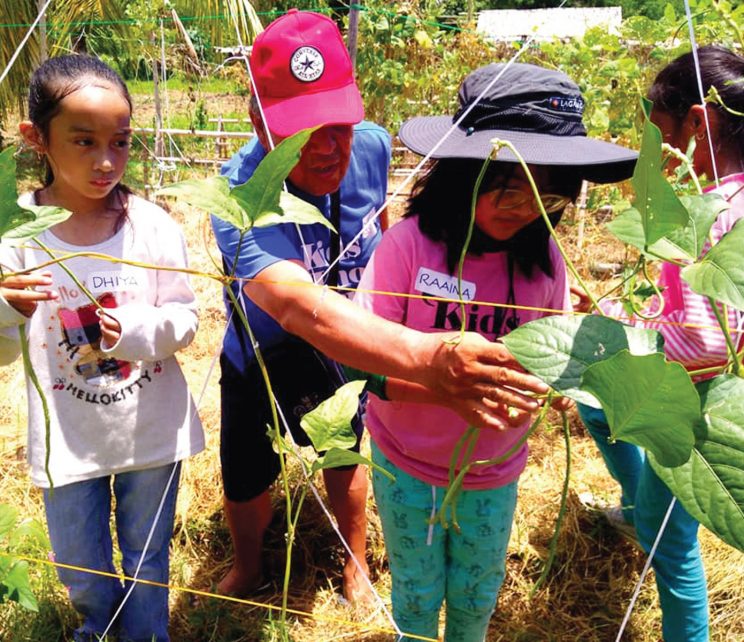 Since then, the father and daughter have trained almost 400 students and women in Zamboanga, Basilan, and Butuan City on the basics of urban container gardening. Topics include what a seed is to transplanting to pest control, but explained in a way that’s fun and relatable to the layperson. First, Raaina talks about food security and the youth’s relation in securing it. Afterwards, Muneer leads them through an urban gardening workshop. “(I want) to help other people grow something in their garden and to help other people do food production in their homes. Even in a small place, we can teach them how to do urban container farming so that we can plant in small spaces,” she says.

The response has been positive. “Number one is they’re amazed that a kid is teaching them,” Muneer says. “I don’t expect to make a big impact, but it’s also good that you help in the process of transforming lives. We always say that my work formally is complementing whatever it is they already have. We’re not bringing solutions. We’re enhancing their skills and we’re contributing to nation building.”

The program has not only helped its participants, but the Hinays, particularly Raaina, as well. “Personally, it’s my way of helping educate my kid outside school,” Muneer says. “She doesn’t have to become an agriculturist. The point is that she appreciates how food is produced and the effort to advocate this has had a positive impact on her.”

He adds, “You can’t change the world but maybe I can influence my kid. You always want to teach something that the kids can emulate down the line. Maybe the reason she is involved in this type of activity is because I involve her in my kind of work.”

Raaina agrees. “(It taught me) to be confident, to make friends, how to cooperate with other people, and mostly how to help people,” she says. “I like it because I’m helping, I’m teaching, I’m cooperating, (and) I’m making new friends.”

Even though the movement has achieved a lot in just a few months, it has had its own share of challenges. The most pressing one is funding. “The challenge was raising funds, but we can overcome this now because we have partners to count on,” Raaina says.

Since it’s a personal advocacy, funding has been out-of-pocket, though KWF has been working with a number of partners, which have included the DSWD Region 9 to conduct lectures in their Haven for the Children and Haven for Women facilities, Rotary Interact Clubs from different universities in Zamboanga, and Isabela City Youth Organization and the Special Forces Battalion in Basilan where Muneer says of the latter, “they have this program to address violent extremism, so we integrate growing gardens plus not carrying arms.”

KWF is also hoping to gain strategic partnerships in order to scale up. It’s here that Muneer’s background in business (he took up Management and has an unfinished Masters in Economics) and development work, specifically with the farming and fishing sector, has come in handy. “My lens is always how to make it sustainable, how to make it an enterprise,” he says. “Not just to produce big fruit but how to sell it as well.” 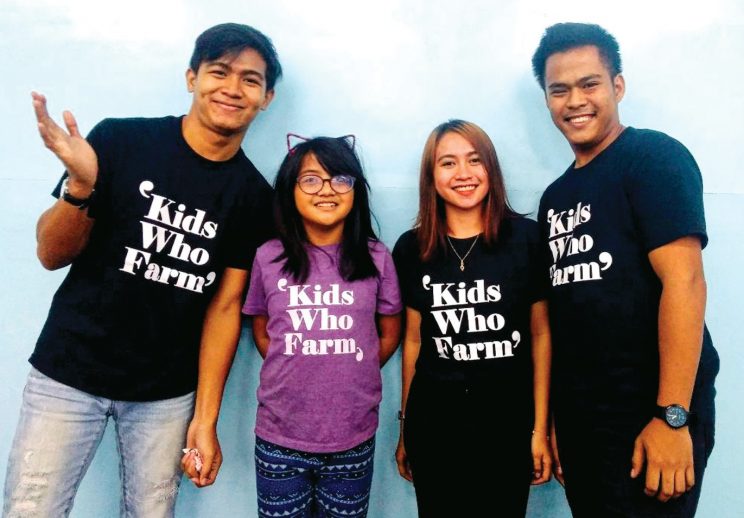 Right now, the group is staffed by Zamboanga-based volunteer trainers, and all participants can exchange tips and stories in their own chat group. “Our future plan is to help other people in different places. To make new partners, new friends, and most of all, is to start agriculture,” Raaina says. “It’s important because nowadays, young people are focusing on other stuff, so we have to change it. We have to make them focus on gardening by teaching them. We are making it fun and easy so it would be easier and fun. Fun is a key to learning because so it won’t be boring.”