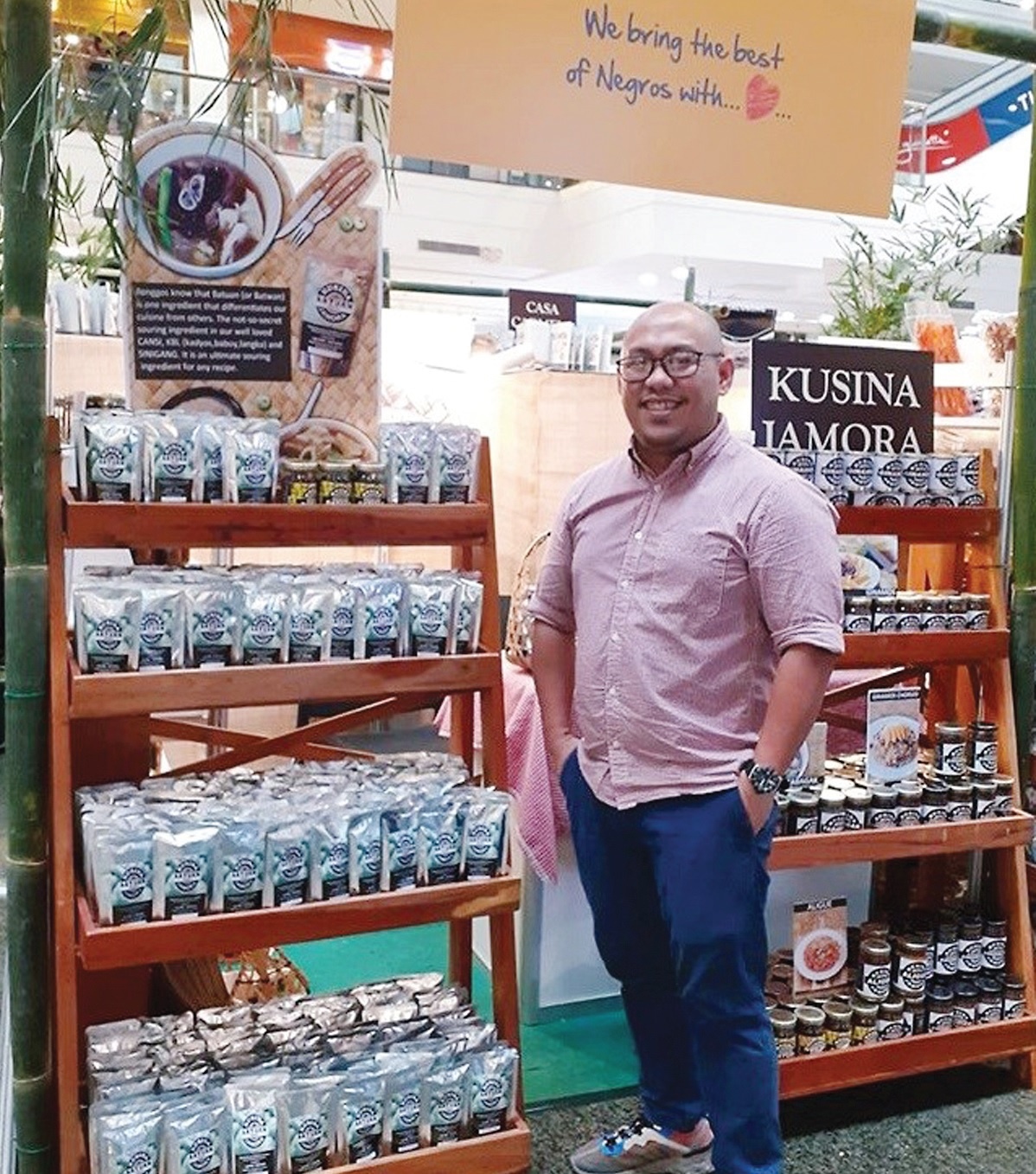 Forty-two year old Joel Jamora knows that in order to adapt to market trends, he must continue to innovate.

It was in 2015 when Jamora resigned from a pharmaceutical company after five years in service. Even prior to that, he was already used to the 8 to 5 lifestyle for years, having been involved in sales and marketing. And so he felt the boredom upon waking up one day without anything to do at home. Added to this was the migration of his mother to the United States in 2014 to be with his sibling.

Jamora is the youngest in a brood of five where all of his siblings already have their respective families living on their own, except for his three nephews whom he is supporting and who have lived with him since 1991. 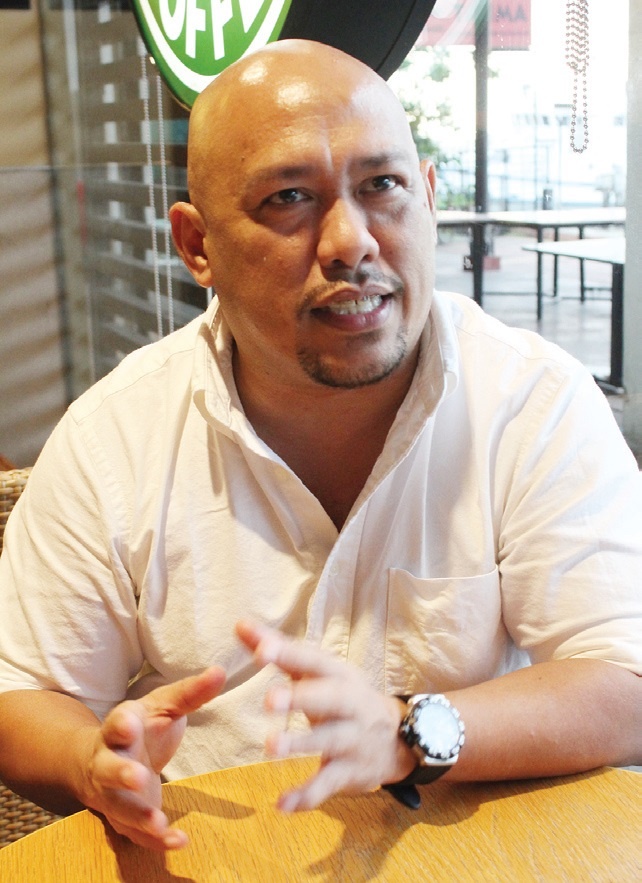 Joel Jamora narrates how Kusina Jamora recreated a family recipe and go against the tide in the market.

One day, Jamora thought of recreating his mother’s longtime recipe for guinamos (or ginamos), the Visayan version of bagoong. After all, he said to himself, it has been their family’s comfort food, so why not make one to make himself busy and give it to family and friends after? That way, he could somehow continue the legacy of his mom, who has been preparing guinamos for most of their family gatherings and as presents to their balikbayan friends and relatives.

From a family recipe to a flourishing enterprise

After letting friends and other members of their family try out his personally-prepared guinamos, he was surprised that the majority of them liked it and prodded him to continue and make it as a start up business instead. And so from there, conceptualization started until he began to introduce and market guinamos in a bottle. Fortunately, his mom returned to the Philippines a year after leaving since she disliked living in another country; she prefers getting old here so she decided to stay. “That’s when everything started to change,” recalled Jamora. 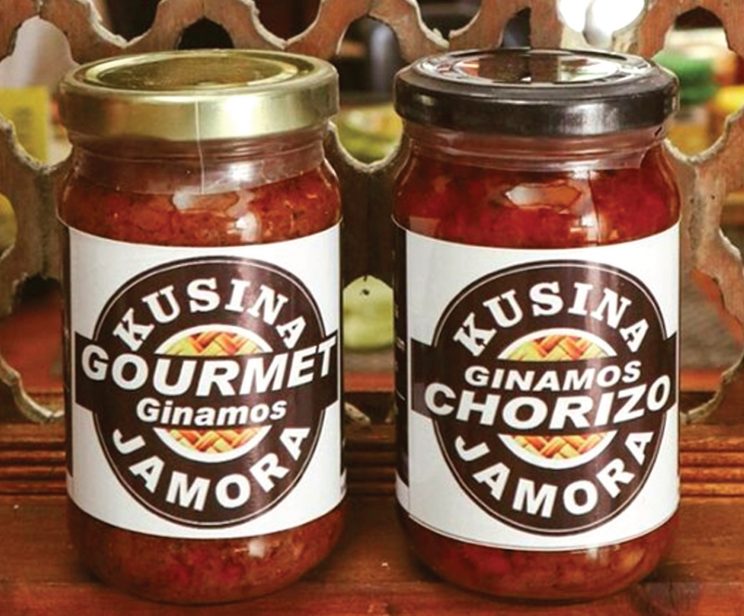 Kusina Jamora’s specialty products, ginamos and ginamos with chorizo, appeal to A, B, and C markets.

From a P10,000 initial investment and with only five workers, Jamora made guinamos his specialty product under the brand Kusina Jamora. Kusina, which means kitchen, aptly describes their products, since the inspiration really came upon a recipe that has been prepared over the years in their family kitchen, which Jamora wanted to recreate and share among other people.

They rented a house in Bacolod City to become their processing area. They preferred such a set up so as not to deviate from having a concept on artisanal products.

Besides spreading the good reviews about their product through word of mouth among their community, Jamora also made full use of social media to promote and penetrate the market. They are currently commercially available at Ayala Central Fiesta Market and in their residence-cum-office in Bacolod.

Jamora admitted that he has no culinary background except for a month’s training in basic cooking. However, he is aware that in order to adapt to the market, he must continue to innovate and be more creative about his products.

Collaborations among family and friends helped him come up with other recipes such as the guinamos with chorizo, which eventually made their guinamos unique in such a way that they added a variation to the plain and simple bagoong since most of us are just used to such variants as either sweet, or spicy.

It started when one of his nephews who was taking up Entrepreneurial and Marketing in college then was obliged to come up with an enterprise as a requirement for his practicum. And so, they experimented in doing homemade chorizo to be combined with their specialty bagoong. It was hit and miss at first until they were able to come up with an ideal product that was suited to their customers’ tastes and preferences. It was proven during a trade fair where they participated in and their products were practically sold out. There was even a chef who made a good review about their product until more and more people recognized them.

“I was actually surprised seeing most of the buyers of our products belong to the Class A and B community, since, in our country, we have been accustomed to branding bagoong as a lowly food. However, during local trade fairs, 80-90% of buyers are from the A, B, and C classes, as well as the younger generation who are experimental with the kind of food they consume,” narrates Jamora. This is the reason why Kusina Jamora became even more meticulous when it comes to the raw ingredients they use in their products. They also try to improve on their packaging from time to time. “I also realized that people do not mind spending more on products that could satisfy and appeal to their preference in terms of taste, quality, and maybe, appearance as well,” continues Jamora. A 225 gram jar of Kusina Jamora guinamos is priced at P180 and P230 for guinamos with chorizo. Both are perfect for pairing with kare-kare and green mango.

But what makes their products stand out? “For one, it is naturally-made, our paste is really paste with no oil dripping. The way it’s processed is slow cooked to perfection. It maybe tedious especially for a commercial scale, however, we want to maintain the quality. It takes four to five hours, not including the pre-process like marinating and the preparation of ingredients,” tells Jamora.

Kusina Jamora sources their raw materials fresh from local fish farmers to ensure quality standard. “We cook them right away to avoid spoilage,” assures Jamora. During the lean season, they require not less than 300 kilos of shrimp every month, and up to 1,000 kilos during peak periods (that is from September to April, where volume requirement increases due to the Holiday season). Fish farmers are being paid from P450-P500 per cube (averaging 4.5 kilos in one cube) depending on the season where quality of shrimp also varies. Aside from shrimp, their key ingredients are vinegar, sugar, and garlic, which makes the product all natural; what makes it unique is the technique or the process on how the product is done – it should be properly cooked and the amount of ingredients should complement each other.

However, the story doesn’t end there. After working out on the guinamos, which they have been known for, they eventually introduced batuan powder which is used as a natural souring ingredient in place of the commercially available souring mixes in the market. Of course, batuan powder gives more nutritional value when added to dishes such as sinigang, cansi, and to Negrense’s well-loved cuisine KBL (kadyos, baboy, langka). Batuan (batwan), being endemic in the Negros region, is a commonly-used base ingredient to many of the region’s products, making their food distinct in taste. “We have a buyer who swears to us that she cannot afford going back to using commercially-available souring mixes, that is why they are purchasing in bulk to ensure supply at home,” tells Jamora. 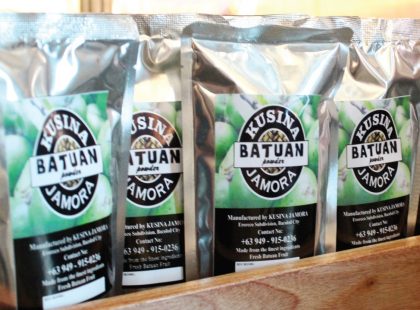 More nutritionally ideal compared to commercially-available souring mixes in the market, this batuan powder uses batuan fruit as base ingredient, which helps fight radicals from the body and boosts the immune system. 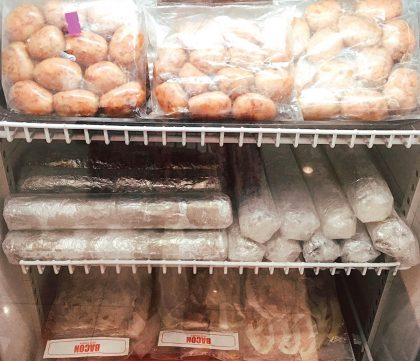 These are the homemade chorizo, bacon, and morcon available for sale under the Kusina Jamora brand.

Kusina Jamora also went into processing other bottled products such as chorizo Alfonso, tinapa na bangus in olive oil, tinapa flakes in olive oil, tuyo, tabagak, aligue, sardines, vinegar, and pickled batuan. They also came up with homemade chorizo, bacon, and morcon. In the works are batuan jam or jelly expected to be launched early next year.

“We want to come up with not just an ordinary kind of recipe that we can share among Filipino families; we want to make something different so we came up with different products that will appeal to their tastes. Although (they are in bottles), we do not compromise the flavor. We opted to really put in all the flavors just like what we do in our kitchen to achieve the best result,” says Jamora.

Though their products are not yet for export due to the rigors of paperwork requirements, they have been to numerous trade fairs and exhibits and into major supermarkets in Bacolod during caravans. Penetrating the Manila market and the different regions is but a challenge for them for now, however, they are optimistic that in five years time, they could make full-scaling given the logistical and manpower developments for Kusina Jamora.

Joel Jamora spills the beans on some of the lessons he’s learned that has led to Kusina Jamora’s success:

“Know your target market and know how to penetrate it,” starts Jamora when asked on the lessons learned during his early years in the business. According to him, there are times when there is a plateau in demand and you need to hang on. “You cannot just sit down whenever you want to ‘cause there are people who depend on you. You need to continuously equip yourself with new ideas to avoid committing mistakes. Learn to innovate, recreate, and reinvent to be at par with the leaderboard. Take risks,” he adds. Having a contingency plan or contingency fund, according to him, could also help during tough times.

“Always look on the positive side. Challenges will always be there. A good example of this was how I started with just a small capital, I took the risks and conquered it,” Jamora explains. “As long as you put passion into what you are doing, a simple recipe can create magic.”

As a marketing strategy, Jamora advises that each product should have its moment to shine, as well as a unique trait that can make it stand on its own. Believe in the power of the “word of mouth” advertising; buyers who enjoy the product and who can personally relate to the values it represents will be the ones who will bring it to the market. “This way, you could slowly establish your brand,” says Jamora.

“Provide jobs and help the community,” adds Jamora. He is proud to say that his employees are receiving pay and benefits equivalent to regular workers. “I was once an employee so I understand their needs; they also have their families to provide for.”

“Above all, everything should come from the heart and pray,” concludes Jamora.

True enough, Jamora is reaping the rewards for the good deeds he has done for others; one of which is being able to provide for the education of his three nephews who are all professionals now – the youngest is working in a multinational company; the second is working as a medical doctor (and a topnotcher in the Medical Board Exams last year); and the eldest is now in the maritime industry. Looking back, Jamora pays tribute to his mother who instilled in him values and life lessons from being a humble grade school teacher in the province for 30 years. And for the bagoong recipe, Jamora claims that it is like a goldmine that was passed onto him that continues to shine.