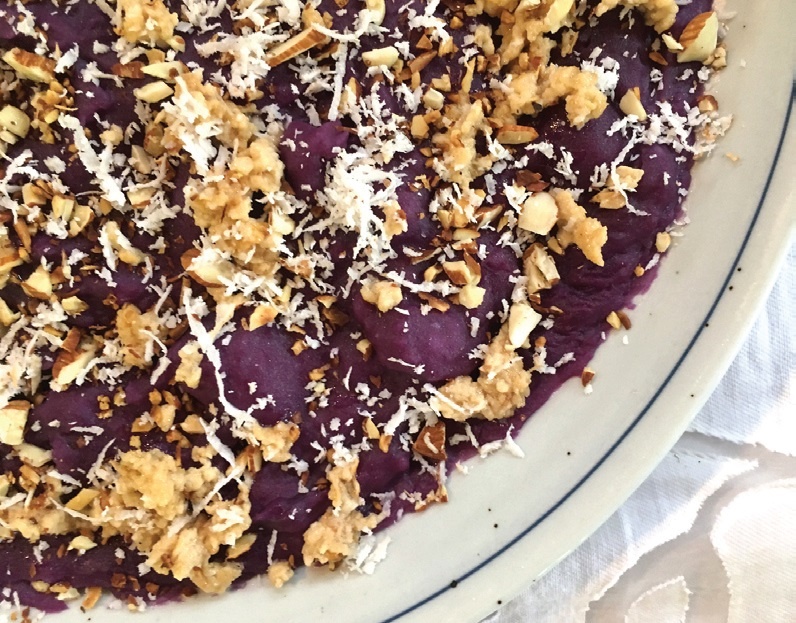 Balay sa Hardin is exceedingly proud of the food it serves guests, and with good reason. The dishes, which use as much produce from the farm as possible, are imaginative and delicious. The kitchen is run by the Fernando’s youngest son, Ardjani, or Ikoy, an agriculture graduate who found his passion in the kitchen. “(I like) cooking with local produce because it’s readily available and you won’t have a hard time sourcing ingredients,” the chef says. “It also helps farmers and promotes Filipino cuisine.”

The meal started with soup called suam na mais, a Pampanga style corn soup that the chef learned from his father, who hails from the province. “He’s the chef in the family,” Chef Koy says about Arthur. “I used indigenous ingredients like spinach, pako, and ampalaya leaves. We also used corn from Bukidnon because it’s hard to find corn here.”

The garden salad is as colorful as it is refreshing and healthy, with ingredients such as fruits in season, edible flowers, and yacon. “I use what we have in the farm and what’s in the local market,” the chef says.

Dishes served are the chef’s take on local dishes, usually family recipes with his very own spin. Ubod, or coconut pith, is stir-fried with local spinach called tadyapa. A really simple, yet delicious dish. The pako and talong, or fiddlehead fern and eggplant, is the chef’s version of the Ilocano eggplant dish poqui poqui, but with a Bisaya twist because of the pako. There’s a bit of acidity from biasong, a local lime, as well as from calamansi. Spinach leaves are stuffed with banana heart and Spanish sardines to form a makeshift, but still hearty, lumpia. Fish maw fresh from the market is grilled with thyme, the herbs highlighting the fish’s freshness.

Last but not least, there is adobo made with tuba (palm wine) and includes kamote to balance its acidity, plus soy sauce for a bit of color. There’s also a bit of sweetness, which comes from both the palm wine and a bit of sugar.

Dessert is ube halaya, traditionally served as is, but which the chef tops with almonds (one of the few non-local ingredients the chef uses) or cashews and dessicated coconut for a contrast in texture and an unexpected layering of flavor.

Many people visit Balay sa Hardin for its ambiance and so they can learn about natural farming. What they don’t know is that they should be visiting it for its outstanding cuisine as well.

This appeared as a sidebar in Agriculture Monthly’s December 2019 issue.

A celebrity gardener: see how Aubrey Miles enhanced her home with plants