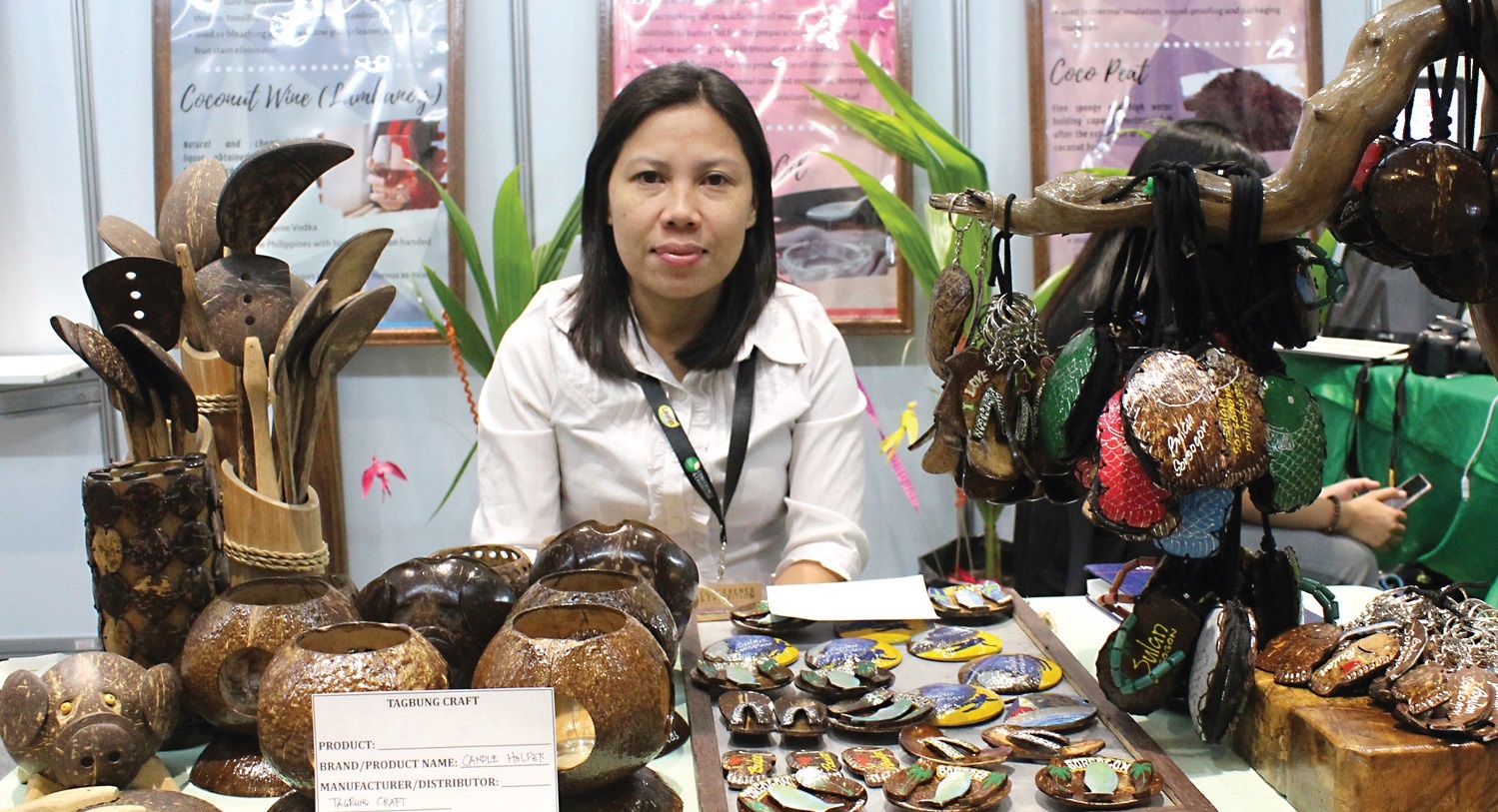 Janelle de Guzman of Tagbung Crafts manning their booth at the recent Coconut Expo at the SMX Convention Center in Pasay City.

An enterprising couple saw the potential in crafting handmade pieces out of the coconut shells which are usually discarded after consuming the coconut meat and water. They have discovered that it can also serve as a source of livelihood by being turned into a variety of products for furnishing and decorating.

What used to be a hobby for couple Janelle and Lester de Guzman of Bulan, Sorsogon, turned out to be a flourishing business, with an international buyer to wit.

Tagbung Craft started in 2009 with a simple key chain handcrafted from coconut shell by Lester. The former was fond of doodling on materials which he could turn onto something useful, such as the key chains which Janelle would display in her mini sari-sari store in front of their house. Proving the saleability of such little pieces among their neighborhood, the couple then went on to create other native crafts such as coin purses, which became the most saleable item at that time. 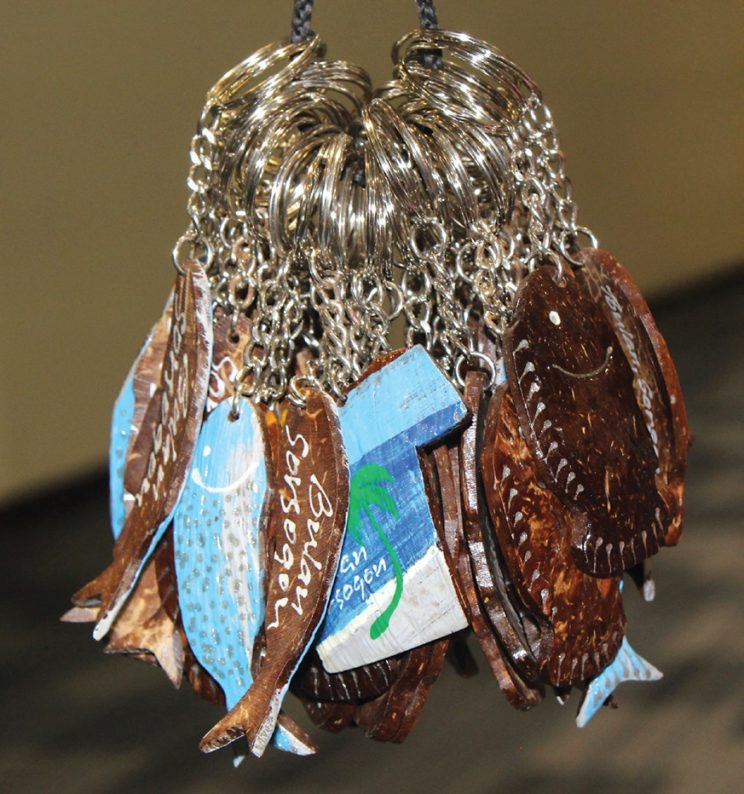 These are the samples of keychains that started everything for Tagbung Craft.

With a P350 initial capital for ready materials such as coconut shells, sandpaper, varnish, and cutter, they were able to produce four finished products which were sold at P150 each. That meant an almost a hundred per cent net profit for their initial products. This inspired the couple to continue crafting more and more pieces until they were able to penetrate the market in Donsol and deliver the items to retailers on a consignment basis.

Later on, the Department of Trade and Industry (DTI) noticed their products and brought them to souvenir shops and transport terminals to help them expand their market. They were likewise given training and seminars in order to improve the quality and marketability of their products. They also became regular attendees of exhibits and trade fairs sponsored by DTI. Just last year, they graced the National Trade Fair in Megamall in Pasig City as one of the exhibitors. It was there where they met a Jamaican buyer married to a Filipina from Tacloban, who said that he would do a test market for their products in his country and ordered a P350,000 worth of products, which they were able to deliver during the first quarter of this year. Although the order hasn’t been repeated yet because of the legal papers that need to be processed in order to continue with the export, nothing was lost for Janelle and Lester since they have already been paid by the Jamaican buyer.

With their five sacks of coconut shell requirements on a regular basis at P150 per sack, this is already their means of helping small backyard coconut farmers in their community earn more. Coconut is considered one of the main sources of income in Sorsogon since the number of coconut farmers across the 14 municipalities and one city of Sorsogon is estimated at 50,000, tilling over 90,000 hectares as previous data revealed. The de Guzman couple, like any other family in the province, also makes a livelihood out of charcoal making when it is the season for it, and copra making whenever there are orders.

A sample of the handcrafted pieces that provide Tagbung Crafts a steady means of income.

A handicrafts store based in Intramuros, Manila also became one of their clients and has already ordered from them twice since last year.

The modest earnings they are continuously able to get from such handicrafts enable them to send their two daughters, aged 15 and nine, to school. Although like in any other businesses, Tagbung Crafts also went through a rough stage; the business experienced a slump for almost four years before regaining a steady pool of clients once again.

Part of their success comes from their linkages: They were also assisted by PCA (Philippine Coconut Authority) and penetrated the Negosyo Centers in Sorsogon as an MSME (micro, small, and medium enterprise) accredited by DTI. The local government in Bulan also allows them to showcase their products during the Kasanggayahan Festival, a province-wide festival in Sorsogon in commemoration of its foundation as a province being celebrated every October of each year.

At present, the couple has two regular workers who are in charge of the cutting (one is a working student whom the couple is helping to finance through college), and three regular sewers who are all housewives in their community who work from home.

Although Tagbung Crafts may still be considered a small enterprise, continuing the business also means crafting a stable income for the families in their community they are able to help. Add to this their contribution in waste management as they add value to coconut shells that most people usually think of as waste. Truly, one man’s trash can be another man’s treasure.

A high school teacher lost his side jobs; now earns extra income from the crops he grows