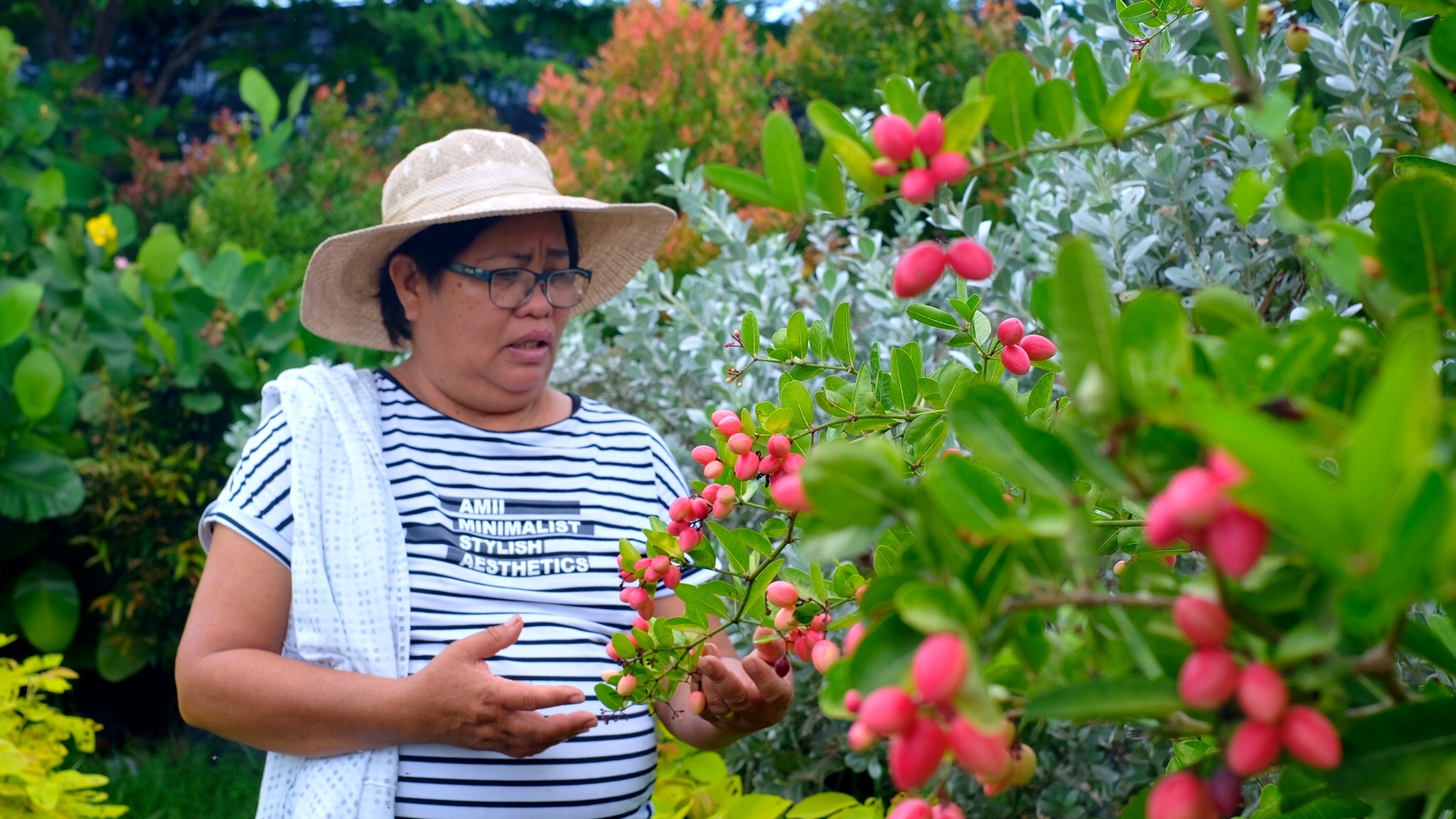 In part 1, Mary Ann Cogollo, a farmer from Iloilo, shares about how her 30-year gardening story began and evolved. Here, she talks about the hurdles she had to face that molded her for who she is today.

Trials behind the triumphs

At the back of her success is an unsteady, challenging voyage that she had to endure. “It’s 30 years in the making and looking back to what I’ve been through and endured, my heart is full,” said Cogollo.

Growing up, Camille, her eldest daughter, saw how she fell and got up many times. She says, “I witnessed how she carried the pails from our wells to water her plants, pull the weeds every day, carried potted plants to hide them because of the heavy storms, how she failed and endured everything, how she learned from her experiences, and how she managed to be a farmer, a gardener, and a mother to us.” 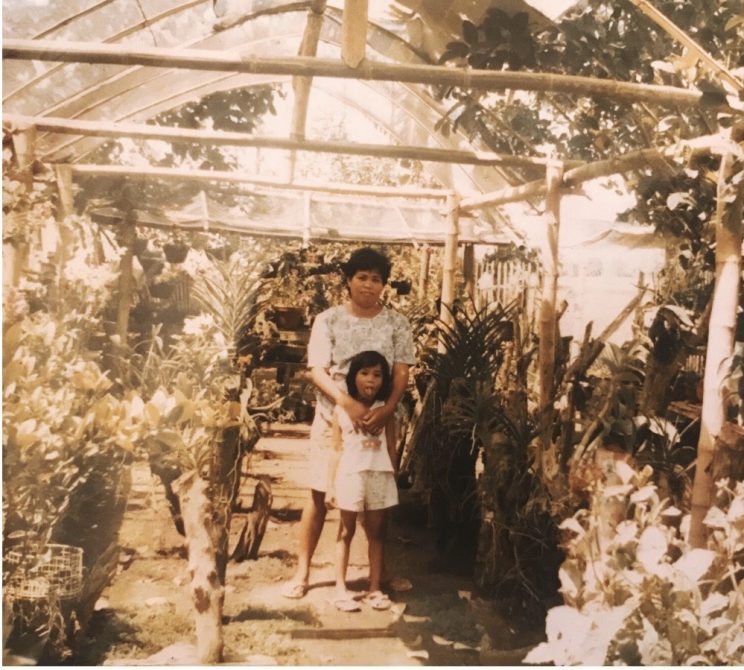 A throwback photo of Cogollo taken in 1994 with her 5-year old daughter.

Before the birth of the gardens, Cogollo had been gardening alone for 10 years. She did the propagation, watering, and application of fertilizers. It was a challenge for this gardener to find suppliers and to travel the plants from the city to their place, but the hardest to deal with is the weather. “Typhoons and extreme summer are two of the most difficult situations to handle as well as dealing with plant diseases and pests. I failed a lot, some of my plants weren’t a success, but I learned from them,” Cogollo added.

The price for the plants in the flower farm ranges from P25 to P10,000 and up. On normal days, they get to sell hundreds of plants every month that differ based on the demand. Most of it is purchased by co-gardeners too.

Cogollo said that this season has the highest sales so far, to the point that they’ve had to bring some plants to the other garden to fill the demand. When they opened last month, they were able to sell 3000 to 5000 pots, which allowed them to generate a minimum of 50k per day from all the gardens.

A mother, farmer, and businesswoman

As a mother of two, she lets her children participate in farmwork and immerse themselves in nature at a young age. As per Camille, Cogollo taught her how to plant when she was four and let her have her mini garden at home. Their youngest has also been helping raise livestock since he was in grade six. “They let us oversee the farm the same way that my lolo did before. She’s taught me how to plant and to marcot, how to fertilize and water correctly, and educated me what plants can grow from cuttings and what plants need to be in full sun or in shade,” Camille added.

Despite the crisis, Cogollo added that God still made a way to provide for her family and their farm workers. She finds herself staring at the sky and thanking God for not leaving her family and the families working for them after two months of farm closure.

When many people began growing plants to improve their lifestyle amid the crisis, her children told her, “Nay your dream is coming true, farming and gardening are taking its shape, gakatabo na nay (it’s finally happening).” Cogollo only hopes for the public to continue appreciating nature and to start growing plants.

Farming has been her life ever since. The life she chose is the same life lived by her parents and grandparents and according to her, to be able to help others while pursuing your passion is a blessing.

As the government implemented enhanced community quarantine (ECQ) to halt the spread of COVID-19, they had to close their gardens for two months. Since they only allow walk-ins and do not offer delivery services, they had no income from the garden.

For Cogollo, those two months were the hardest; there were no landscaping projects but they had to give salaries to the employees every weekend. They thought of stopping their daily farm operations, but their musings brought them back to their primary goal, which is to provide the workers’ livelihood. They hired five more people who lost their jobs during those two months and didn’t stop propagating and maintaining the gardens. 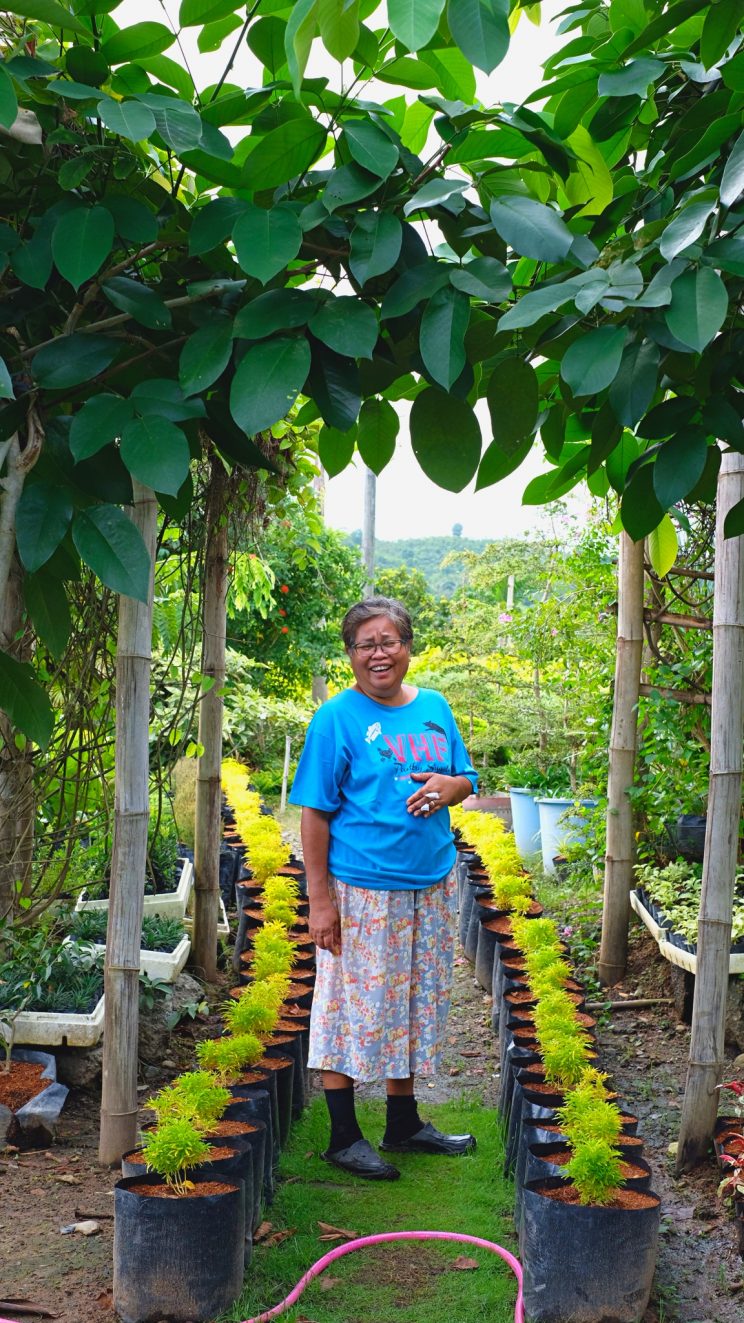 All smiles on her farm – As per Cogollo, the crisis allowed them to pause and see what they can do better.

Living on a farm is an advantage because it’s Covid-free and their staff live nearby so they carry on with their daily work in the gardens and farm. Fortunately, after two months, a sudden increase in demand for plants began. The crisis has become as she calls it, “a ‘plantdemic’ for Ilonggos.” Their gardens re-opened for visitors when Iloilo was placed under GCQ (general community quarantine).

From then on, the farm was amplified by different networks through social media and word of mouth. Despite their location, they were shocked that people kept visiting or asking about their gardens’ location. At some point, they were afraid due to the increasing numbers of visitors and of the risks it can entail that might harm their  community. However, it was all worth it because according to Cogollo, “We know our dream is coming true. Farming/Gardening is taking shape.”

They were also supposed to put up a garden café and park last May but due to these circumstances, things didn’t go as planned. In the future, they see the garden as a haven where people can stroll and appreciate and realize the beauty of nature, especially if we take care of them.

Seven errors to avoid when pruning