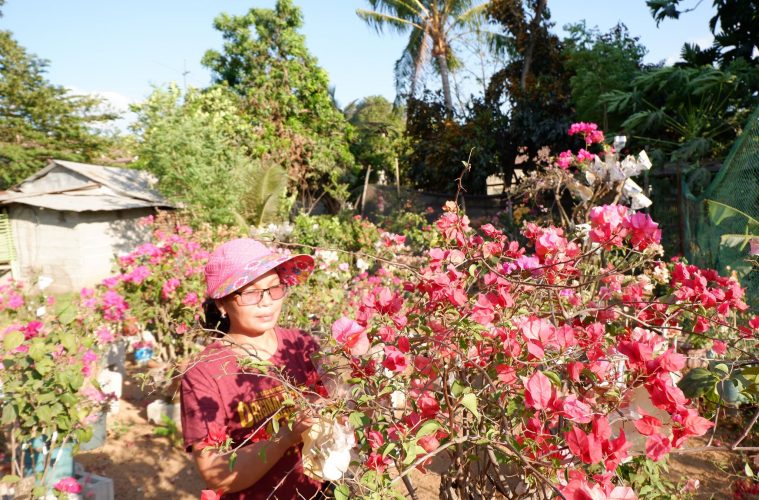 This gardener grafts and propagates bougainvillea in her garden located in Pangasinan.

In the Philippines, bougainvillea, locally known as bugambilia or bougies, is one of the more popular ornamental plants in the country, as it is commonly seen in public areas. It is known for the captivating colors of its bracts (specialized leaves that surround the true flowers of bougies) and for its adaptability to hot, extreme environments. The large, vibrant bracts are usually mistaken as the flowers by some non-growers as well.

A simple hobby to a flourishing garden

Josefina Bunquin of Alcala, Pangasinan has been growing different types of bougainvilleas since 2018. She now owns a large greenhouse in her backyard that is full of bougainvilleas. She calls it Garden of Danie Sam, derived from her two daughters’ names, Danielle and Samantha. 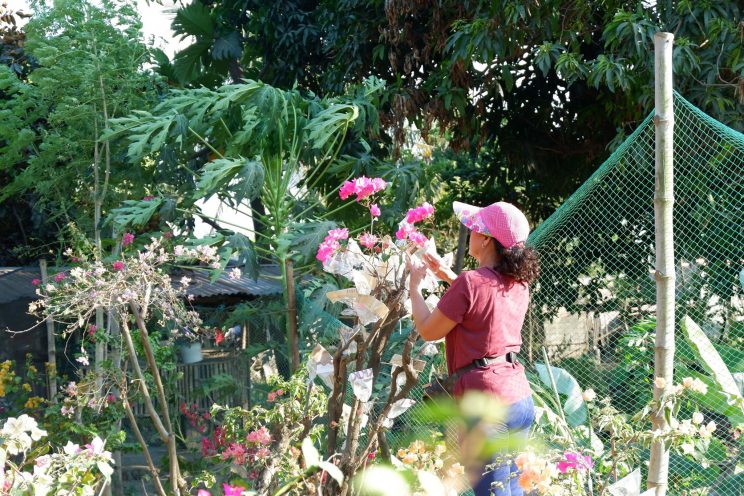 Being active and hands-on in managing her garden is what keeps this gardener successful from growing bougainvilleas to selling them.

Growing up, planting different fruit-bearing trees and flowering plants used to be a bonding time with her late mother. This is what influenced her love for plants. Back then, their family’s earnings came from farming rice and corn alone and because of it, Bunquin and her siblings were able to finish school.

When she was starting her garden in 2015, Bunquin initially collected rare hibiscus at home. She artificially pollinated (a method of manually pollinating the female flower plants with male pollen by the use of human hands) thousands of them and tended them for three years. However, due to the high maintenance and the amount of insecticides that hibiscus demands, she realized it had health risks, specifically for her lungs. Hence, she switched to cultivating bougainvilleas instead.

Bunquin grows common, semi-rare, and rare varieties of bougies. She also grafts them on small and big trunks. The plants are mostly for sale, but she also saves some pieces for her personal collection. At first, she was able to propagate and sell a few of them, just enough to pay for maintenance costs, but eventually, she was able to get rid of the hibiscus plants and replaced them with more bougies. 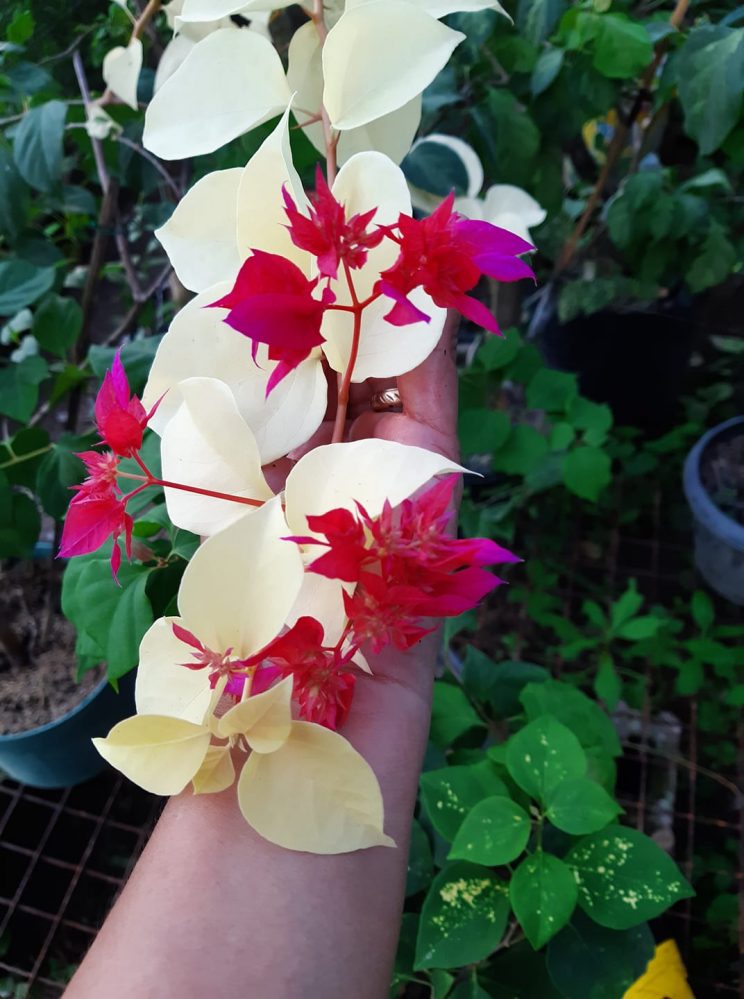 A bougainvillea variety that is called an albino deep red Mahara.

As her collection continued to increase, she decided to build a greenhouse. The 500 square meter-wide greenhouse is an area where she places ready-to-sell bougainvilleas and where walk-in buyers can pick and purchase plants. Aside from the greenhouse, she also has separate areas for propagation and grafting. 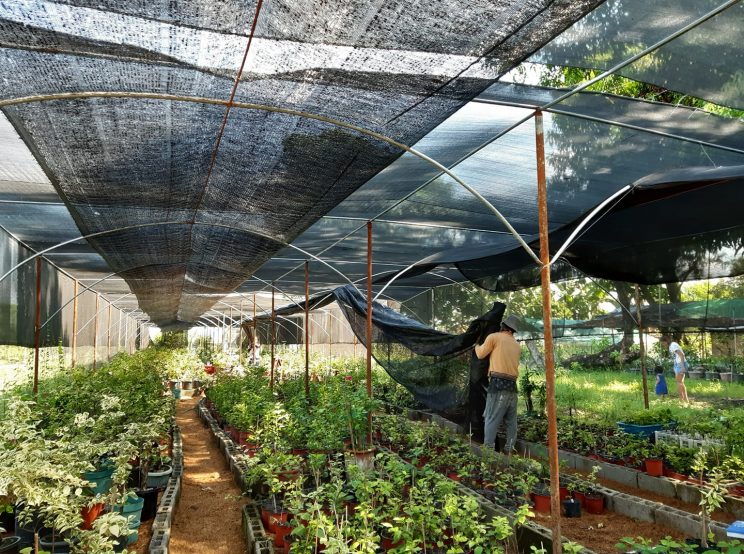 Her greenhouse measures 500 sqm, allowing her to house more plants, both for selling and her personal collection.

In the beginning, she worked in her garden with the help of her childhood friend, but nowadays, she employs three regular helpers. She’s able to provide not just a steady income for her employees, but also a part-time job to other residents in their barangay. During the construction and renovation of her gardens, she hired some carpenters from their area. Whenever they gather small trees from construction projects, she buys these from them for her grafting works.

The grower sells her bougainvilleas online and through word of mouth as she finds bazaars stressful. For her, the goal of cultivating plants is having fun as she nurtures them.

Aside from the fact that growing bougainvillea keeps her happy and stress-free, it also allows her to earn an income. Prices of her bougies range from P50 to P100 for common varieties, P150 to P250 for semi-rare varieties, and P500 to P1000 for rare ones. Bunquin gets to sell more than 200 plants per month depending on the demand and supply of the available bougainvilleas that she can provide to her clients. Most of the sales are spent on maintenance and new varieties.

During summer, she waters the plants twice a day. She uses cow dung as a fertilizer and applies an environmentally friendly plant stimulant on the leaves once a month. The gardener also uses a rooting hormone for fast rooting. In propagating, she places the soft cuttings in a cup and seals them with plastic cover until the roots become visible. This incubation period lasts for two weeks to a month. Afterward, Bunquin slowly conditions the plants to adapt to the outside environment by making a small opening on top of the plastic cover and exposing it to direct morning sun. Once the plant is healthy and has adapted to sun exposure, that’s when she takes them out to full sun; this also indicates that they are likely ready for selling. 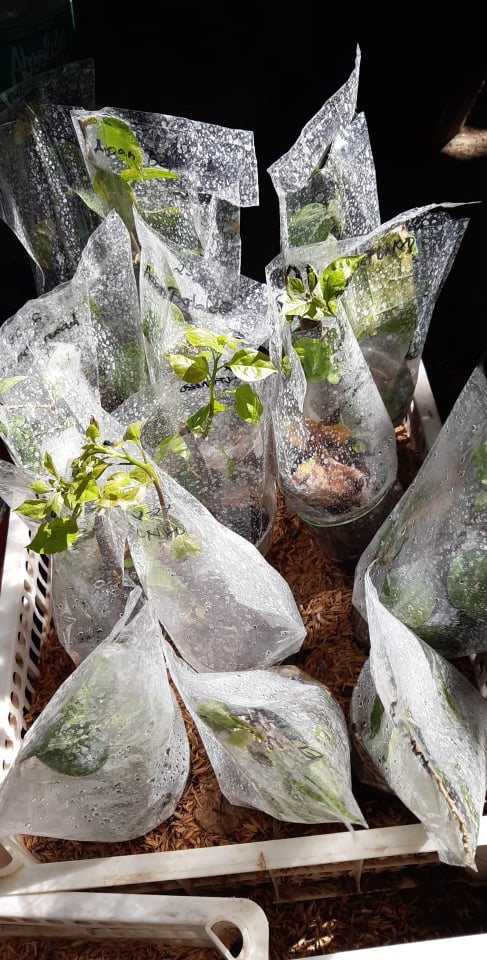 Propagated bougainvilleas that are in their incubation period, a stage in which they slowly adapt to the outside world until they become ready for transplanting.

“If I have a new breed from hand pollination, I propagate them for the purpose of selling their cuttings. I either propagate them through rooting or grafting methods,” she added.

A blessing amidst the crisis

Despite the situation, the community quarantine imposed to combat COVID-19 has been a blessing in disguise for Bunquin’s garden. Travel restrictions have hindered many couriers to ship out, which led to more nearby co-sellers and growers dropping by to visit her garden (within quarantine regulations, of course). She says, “When they discovered that I have a good number of bougainvillea variations and that I only sell healthy and well taken care of plants, more resellers and collectors came to me.”

Bunquin is a full-time gardener and one of the best practices that made her successful to date is being hands-on and active in running her garden. “I always see to it that I personally manage my garden, from grafting, pollinating, rooting, watering, tools, and even the kind of soil to use, I am the one who decides,” said the bougainvillea grower.

With the increasing demand for plants in general amid the quarantine, Bunquin said that her prices for plants didn’t change. She added, “One of the reasons why my patrons keep coming back for more is because I offer cheaper prices compared to other sellers. I do not charge extravagant prices for my plants, just enough to earn a profit.” 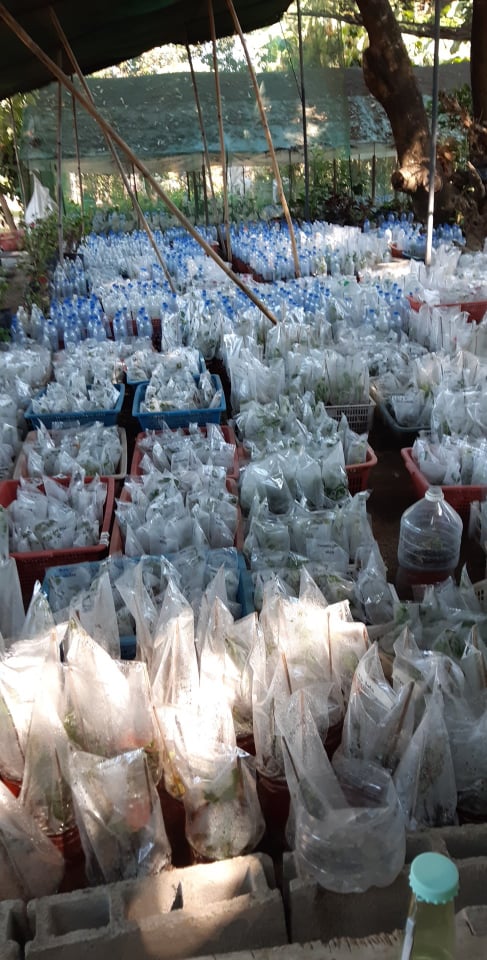 This is her propagation area, which has the same size as her greenhouse and where she places propagated bougies.

After two years of growing bougainvilleas, here are the lessons that Bunquin has got to share:

For more information, visit the Garden/Farm of Danie Sam.